Prizes of the Reconquest

LOOKING AT SOME OF THE VEHICLES SCAVENGED BY THE RESISTANCE 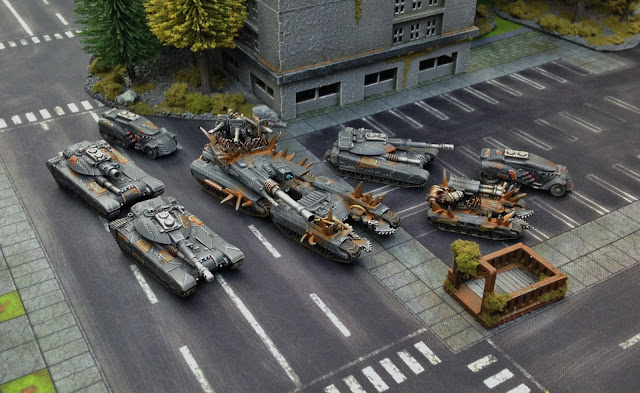 One of the main reasons I chose to collect the Resistance was their huge conversion potential. In no way would I be limited by the narrow scope and design of the four original Factions - a whole world of kitbashing, sawing and stealing awaited me! I wanted no two vehicles to look the same, and after the big push to make the army look unique for Autumn Invasion 2015, I started to realise the potential of using models from other sources - stolen, scavenged and repurposed.

The inspiration for these conversions came from a variety of sources - every post-apocalyptic movie I could find, for a start. Mad Max was the original and strongest influence as you can imagine. A treasure trove of pieces came from N-scale scenery available to Model Railway enthusiasts. Many of these pieces would find their way into the War Rig, while spikes from Games Workshop models adorned the Buzzards.

The biggest influence was Hawk themselves. The Resistance have always had a rich history in repurposing civilian vehicles and stealing Scourge weaponry for their Veterans and Thunderstorm hovercraft - I just took it a bit further. I started looking at the other Factions - specifically the UCM, but soon enough the PHR started appearing on my modelling table. I figured that the Resistance would be reacting and evolving fast as these new enemies (or allies) entered their territory.

These conversions are merely scratching the surface for the potential of the Resistance - I already have more conversion ideas and hope to bring them to the painting table as soon as possible!