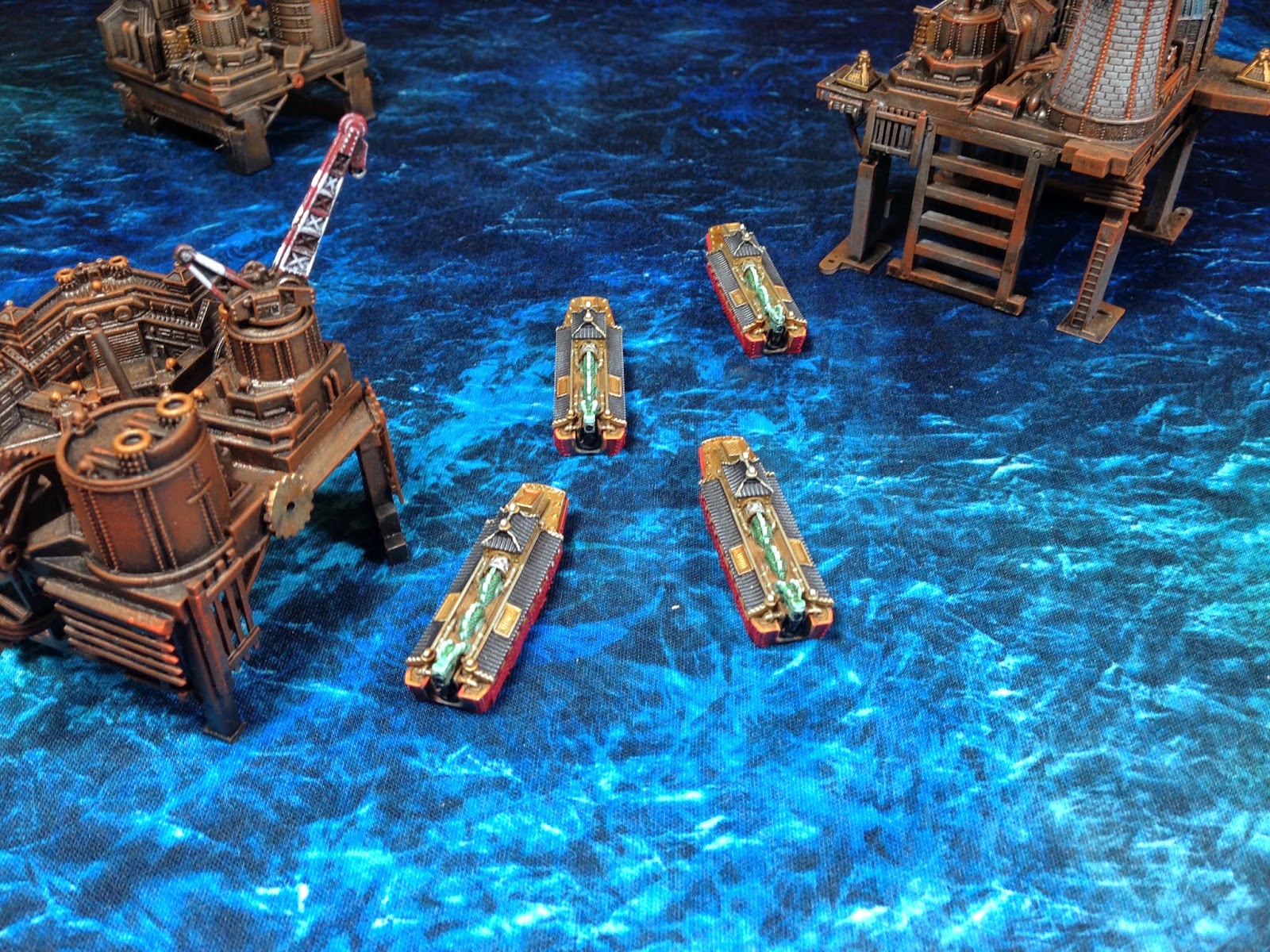 Welcome to our first Battle Report with the new edition, and the first game of what I hope will be another great campaign.
New rules, new fleets, new ocean... the new Campaign will see a lot of new models and terrain to test out Second Edition, and hopefully let us use some models that may have been relegated to the sidelines for a bit too long.

In this opening game, Good Friend Ben and myself will be pitting the Federated States of America versus the might of the Chinese Federation - a fleet that has not featured much on this blog even though I painted the fleet nearly a year ago! In keeping with the reputation for faster, bloodier games, we have upped our usual game size to 1,500pts, meaning Ben gets to use lots of new American toys and I get to field almost every Chinese model I've painted. 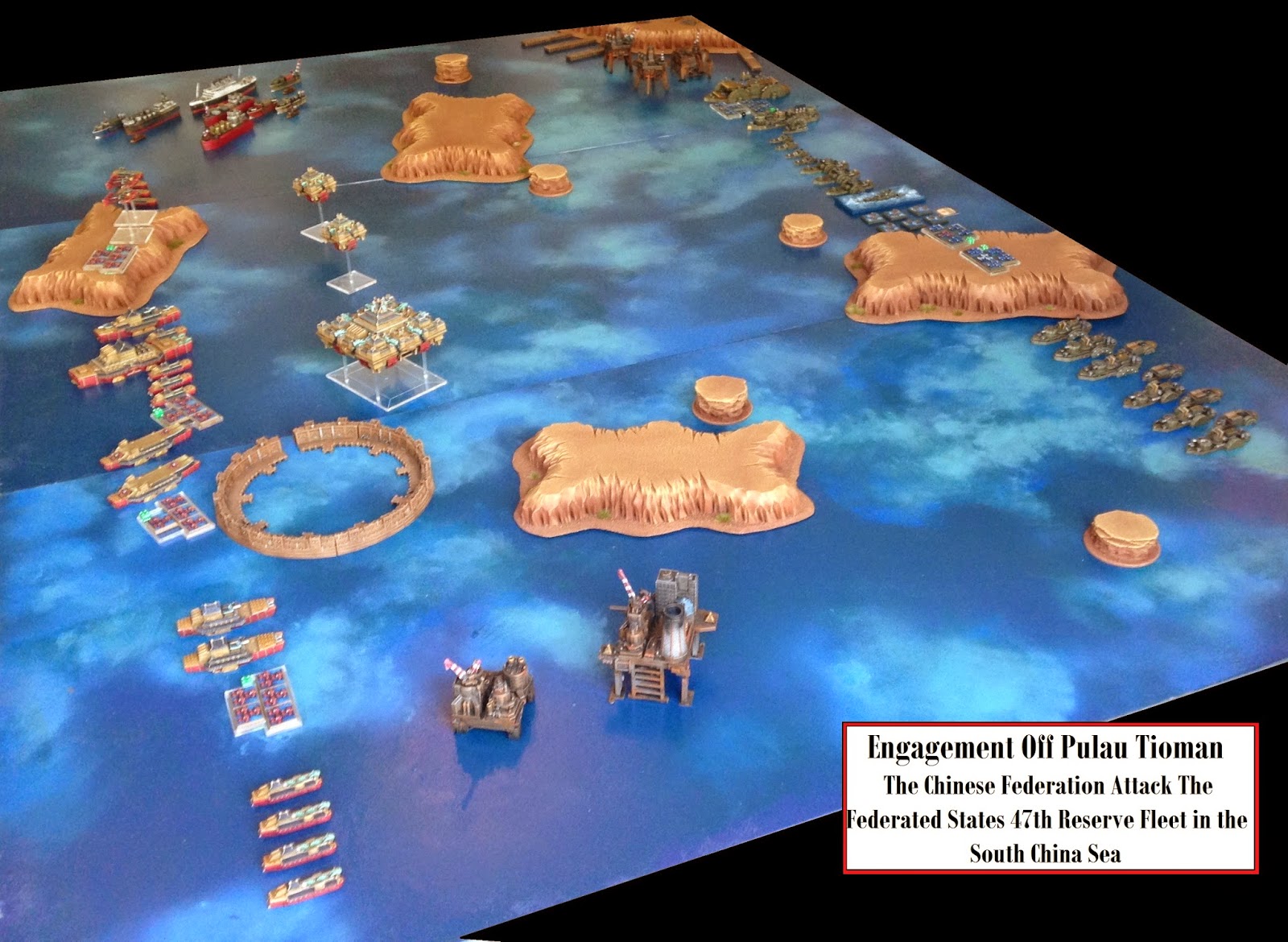 The board was set with some of the new desert islands, and also featured a convoy fleet moving in the far corner, a ramshackle floating village and some scattered platforms to represent the strip mining perpetrated by the East India Merchant Company and their Grand Coalition allies. The FSA would take the side of the board with the largest concentration of rigs, while the Chinese Federation would attack from behind the floating village. The convoy fleet was only there to look good and would not be used in the game itself.

Drawing secret Field Objectives, Ben's FSA would have to earn 1050 Victory Points to achieve the win. I, in turn, would need to destroy or capture all of Ben's Large/Massive vessels. I decided not to change this, as I considered it would be a nice challenge! We did not know each others Objectives until the game finished.

A nice open centre but some key islands for cover across the board - this should be messy. On to the game...

Ben's Fleet
The Federated States of America
One Liberty-class Heavy Battleship with a rocket battery, accompanied by two Springfield-class Escorts and upgraded with Elite Crew
One Saratoga-class Fleet Carrier with one squadron of five Dive Bombers and one squadron of four Fighter Planes, lead by an Ace Pilot
One Boston-class Submarine with six Turtle-class Attack Submarines 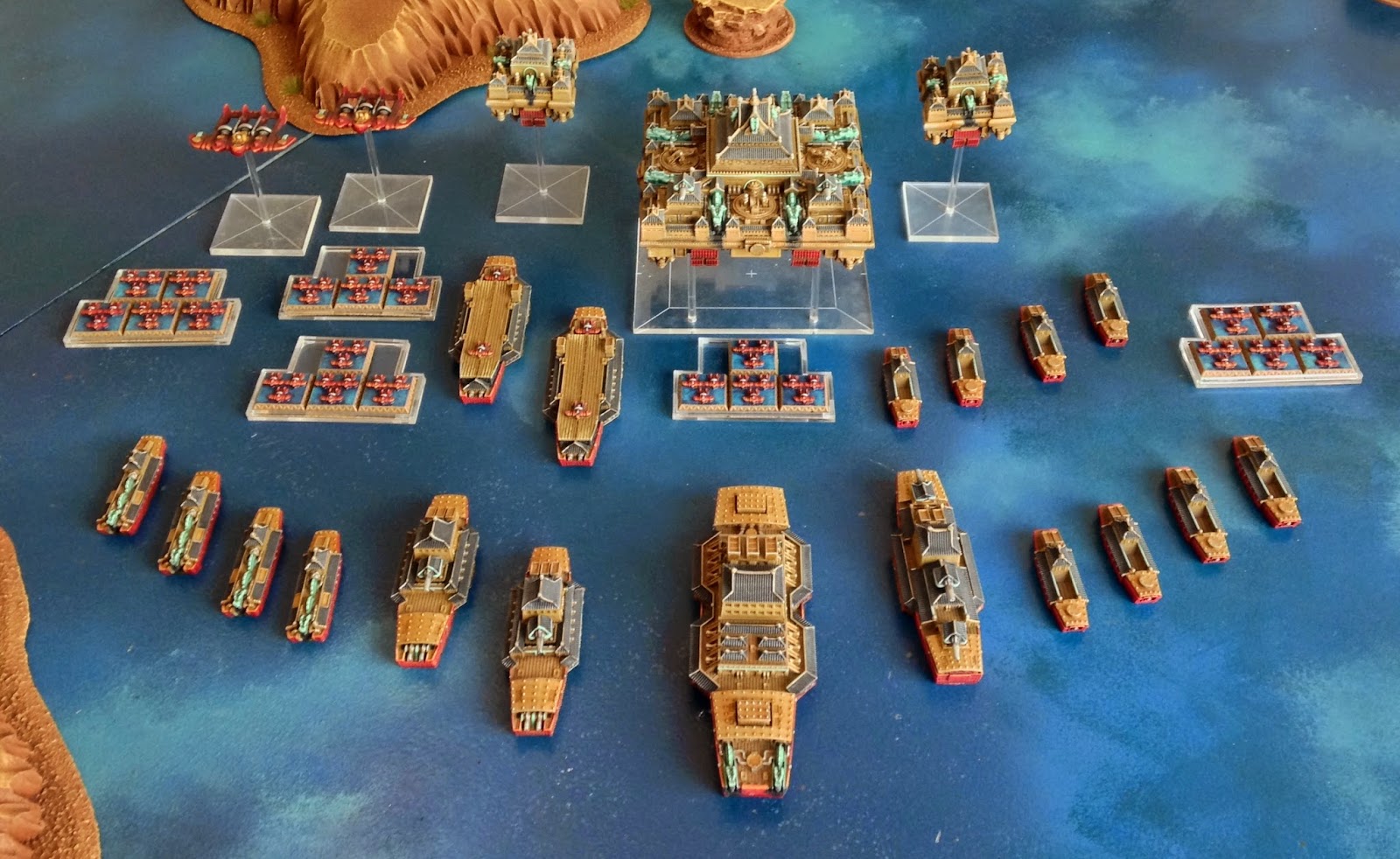 Turn One seemed fairly even - the Federated States concentrated their fire on the Advance Force while the Chinese Federation split their gunnery across the three Medium squadrons, attempting to reduce the effectiveness of the turrets before they can cause too much damage.

A bloody mess of a turn, no doubt! The Chinese Federation have lost their Dreadnought Fortress and their Support Carrier squadron, as well as using the bombs on several of the Dive Bomber squadrons. The Frigates have expended many of their crew in Boarding actions. Nonetheless, they are in a far better state than the American fleet, which has lost all three Medium squadrons, most of the Destroyers and Frigates, and the Submarine. The incredibly brutal flamethrowers have shown their effectiveness, and the importance of keeping crew alive to deal with Raging Fires. By the end of the second turn, the Chinese Federation have scored 1,037 Victory Points but not achieved their Objective. In turn, the FSA have scored 830 Victory Points, again not achieving their Objective. The game continues!

Turn Three ends with the FSA still not having completed their mission, and the Chinese slowly running out of gunnery and bombs with which to destroy the Heavy Battleship. 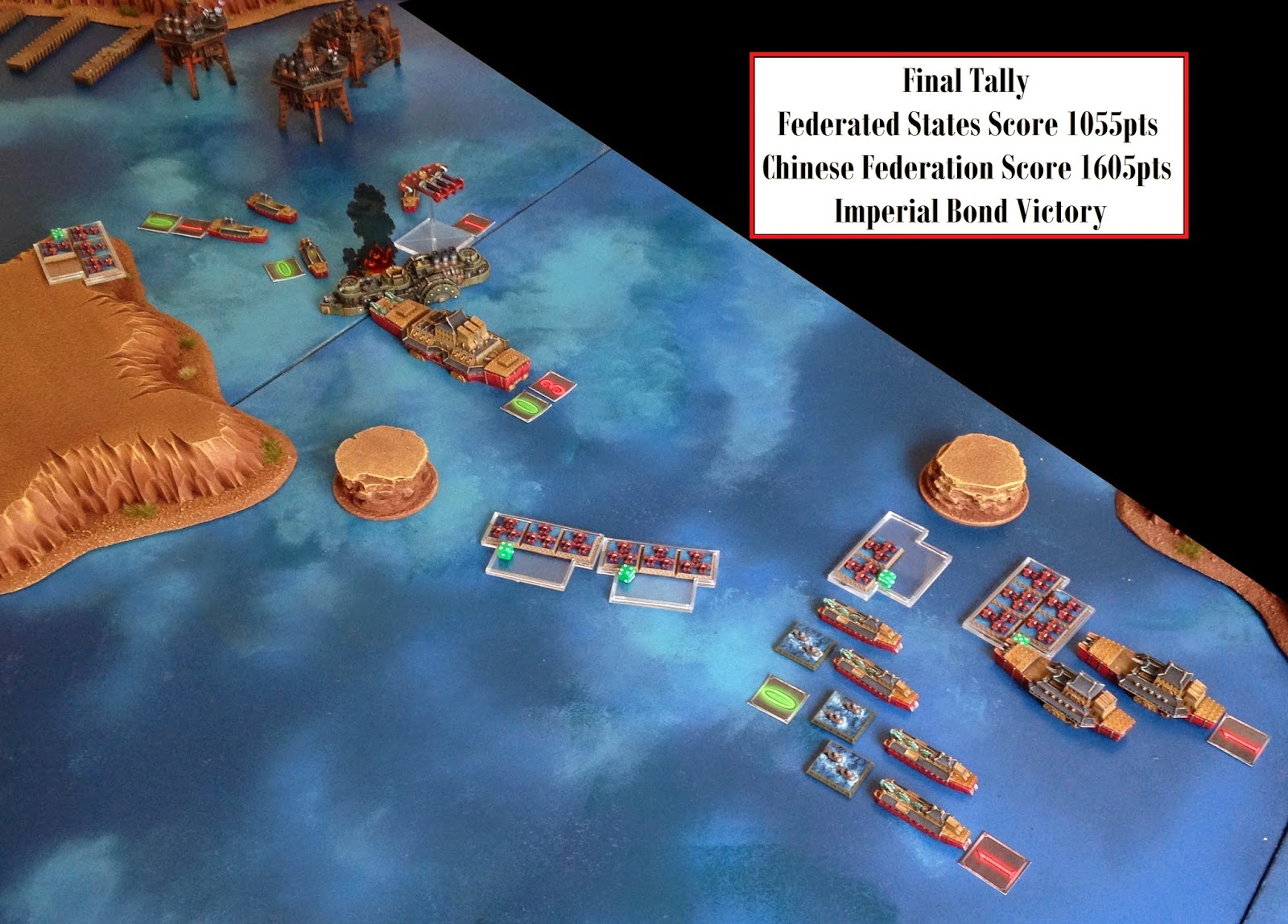 ENDGAME
Death by a Thousand Cuts! The American flagship is finally brought down by the combined might of the Chinese fleet, and the game won. The FSA did not completely fail, however, and did score the 70% they needed to achieve their Field Objective - so both sides have completed their Objective, just unfortunate for the American fleet that they suffered such complete losses and lost on Victory Point difference.

CONCLUSIONS AND LEARNING POINTS
There are (currently) THREE amendments/retractions/accidental cheating aspects for this Battle Report... the Dreadnought should not have set up in the Advance Deployment, it only has ONE flamethrower per facing and has Rugged Construction (2) instead of (1). Amazing how we managed to run the rules for that massive model so wrong... apologies all round. In my defence, it was my first game with the Chinese, and I had not prepared enough for them. Can't be perfect, I'm afraid... but we will try harder next time!

This was our first Battle Report for the new Edition of Dystopian Wars, and gave us a good chance to look at some of the changes in action. We were both very impressed with the new shooting rules, the pooling system is much simpler and fast now.

Causing damage feels faster, and both of us caused an incredible amount of damage in the first two turns - enough to end some games if we had different Objectives. Losing the Dreadnought Fortress so early was a shock, but I did place it in the middle of the board, and Ben shot everything he had at it.

Ben was very pleased with his Liberty-class Battleship, and looks forward to using it in the future, as well as trying out the new Battle Cruiser and Assault Carrier that have recently come into my possession.

The biggest change we both found was the changes to tiny flyers, the SAW tokens and squadrons. The new damage system is fast and easy, and the importance of carriers cannot be underestimated - both of us used the Carrier Points to refresh and rebuild lost tokens, and would have loved to play a slightly different set up where we use them better - as it was, my Support Carriers were destroyed rather quickly, while Ben's Fleet Carrier was out of position and could not help as much as hoped. When Ben has his new Assault Carrier things will be different, as that vessel can get into the fight properly.

Overall a nice fun game, and though it lasted a bit longer than usual, it was still the Dystopian Wars we know and love.

THE NARRATIVE
"...the first engagement with the Chinese Federation off Pulau Tioman was disastrous for the Federated States Navy; a huge loss for a fleet that was meant to be far from the active theatres and resting for future campaigns. The loss of the Liberty-class FSS Antares and Rear-Admiral Stockton were grievous blows, but they had caused delays to the Chinese attack, and cost them far more than they had planned to lose. Stockton and his crews had paid for this small victory with their lives..."