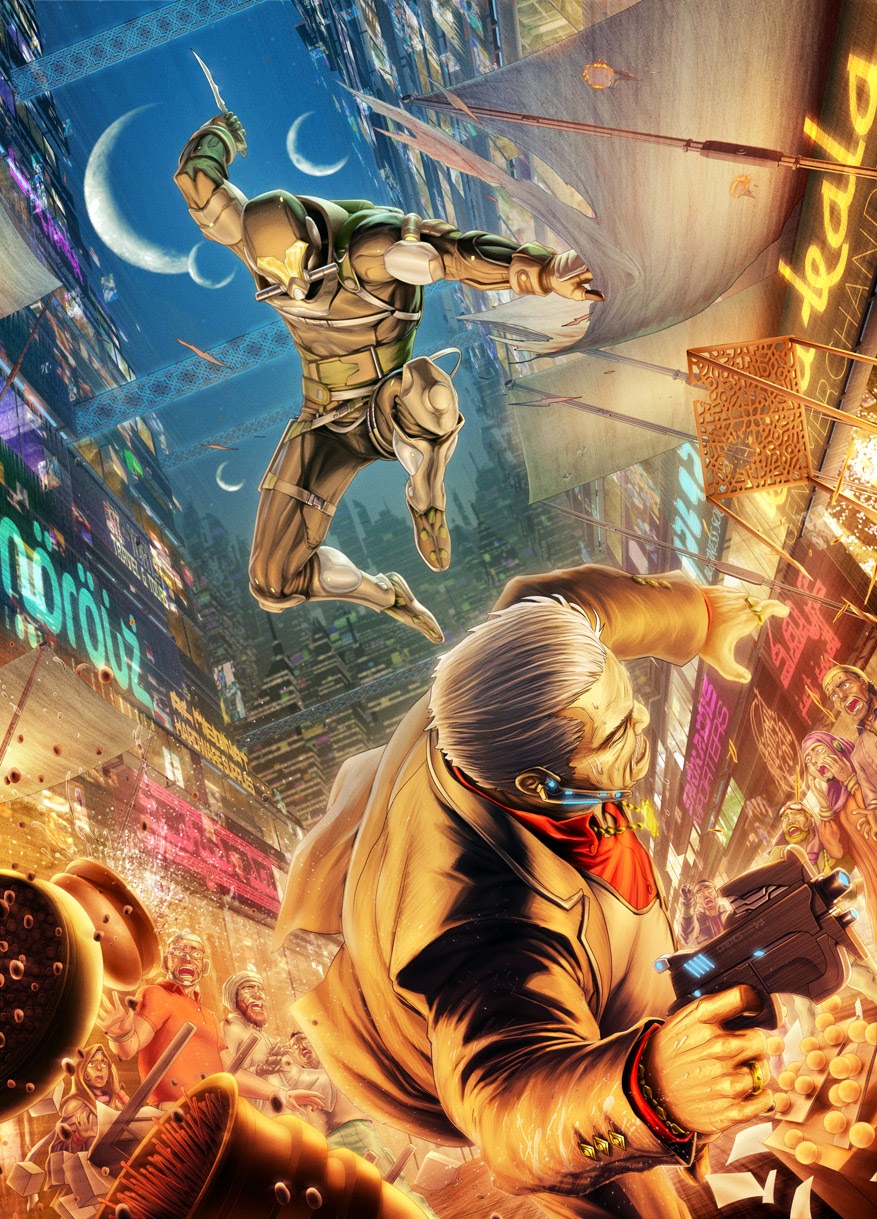 Welcome to another round of the Escalation League! Once again, the soulless robot monsters of ALEPH face the heroic soldiers of Corregidor, as myself and Winner Dave continue our Infinity learning experience. This game comes a week after a tournament we recently attended, which you can read about here, and would prove to be a great launching point for some of the tactics we learned and developed there.

In our last game, my team achieved the Classified Objectives but were almost wiped out by Dave's counter-attack, giving ALEPH their first decisive victory. At this point, Dave had scored THIRTEEN Campaign Points while I was slightly ahead with EIGHTEEN.

In this mission, we would once again use two Classified Objectives each, but with bigger forces (250pts) and the inclusion of a "Spec-Ops" model. A veteran trooper with upgrades we get to choose, the Spec-Ops offer the player a chance to take something their force would normally lack, such as a Hacker or Sniper. You can see what we both decided to take in the list section below.

Rolling up secretly for Classified Objectives, I had rolled Data Scan (requiring my Hacker to "scan" an enemy model) and Telemetry (requiring my Forward Observer to "mark" a target) - these suited me well. Dave rolled Telemetry as well, and Extreme Prejudice (he would need to score a Coup de Grace on an Unconscious model).

My force was built around the Link Team, which would run with the Gecko as a strong firebase, presumably in the centre of the board depending on Dave's setup. The Vortex would operate as a sniper to cover the table, while the Tomcat and Hellcat would be ready to appear from the sides and help out where they could assist. At least, this was the plan!

A slightly smaller force, Dave had chosen a force lead by the always entertaining Ajax. The Chandra would cover the board - in a funny turn of events, Dave had chosen exactly the same upgrades for his Spec-Ops model as I had! The Naga would be causing a lot of trouble with his camouflage and Monofilament Mines - I worried they would cut my Gecko in half.

Dave opened the game, sending Ajax forward toward my Link Team and the Gecko. He was undisturbed by sniper fire from the Vortex, who was soon dealt with by the Chandra sniper across the table. The Naga Minelayer moved alongside him, and placed two mines at either end of the yellow crate the Wildcats were hiding behind - if they tried to escape, they would probably be cut down. At this point one side of the crate had Ajax, two Monofilament Mines and the Naga, and on the other side stood five Wildcats and the Gecko.

In turn, the Nomads deployed the Gecko to take down the Chandra sniper, and then the Alguacil Forward Observer appeared and marked Ajax, achieving the first Classified Objective - Telemetry. He did not set off the Mine, as I had intended. The Wildcat Hacker then ran a Data Scan on Ajax, who was now on the other side of the yellow crate. Second Objective achieved! To finish, the Tomcat appeared and Discovered one of the Mines and used his Combi-Rifle to shoot it. Reacting quickly, the Naga replaced it, but with a further two Orders the new Mine was also Discovered and shot.

In the second turn, the Myrmidon with Spitfire tried to attack the Link Team but was shot down, a bad start for ALEPH. Ajax made up for it though, taking out the Alguacil, before charging the Gecko and, in three crushing blows, bringing the TAG down. The Nomads moved in response, sending the Hellcat forward to open fire on Ajax. In three quick bursts, the beast was taken down, but it was not easy. The Link Team advanced, the Wildcat Engineer operating on the downed TAG and bringing it back to 1 Structure Point. Quite a turn of events, as the TAG was taken down and then repaired, while the leader of the ALEPH team is riddled with bullets and finally brought down. I was rather glad I had spent some spare points on a Wildcat Engineer at this point!

In the final turn the ALEPH forced moved forward, the Naga finishing the Unconscious Alguacil (achieving his Objective) before taking out the Spitfire-armed Wildcat with some good shooting. The Sophotect used her medical skills to revive the downed Myrmidon with Spitfire, who promptly set up a wall of Suppressive Fire that would deny the Wildcats escape from the shadow of the yellow crate. The Myrmidon Officer, now in charge after the loss of Ajax, covered the other side.

To finish, the Hellcat moved across the crates and spied a Thorakitai, who was dealt with promptly. With all other routes covered by angry Myrmidons and not willing to lose out precious Victory Points, the Nomads withdrew, and the game ended there.

THE RESULTS
A great game! Thoroughly enjoyable for both of us, even if very few models were actually taken out. Both of us used skills and strategies to deny one another, and it felt like a game of chess more than Infinity at times. In the end we had both lost our Spec-Ops snipers, and Dave had lost a Thorakitai and Ajax. I had lost the Wildcat with Spitfire and my Forward Observer Alguacil.

In turn, I had scored 75 Victory Points and only lost 45 Victory Points, while achieving both of my Classified Objectives. This gave me a score of EIGHT and brings my Campaign Points Total to an impressive TWENTY-SIX. Dave will be hard pressed to catch me on this!

The next game is Objective based, however, and has a maximum score of TEN, so if he can deny me then he could catch up and take over.

CONCLUSIONS AND LEARNING POINTS
Concentrating on the Objectives and less on the shooting made for a slower paced and more deliberate game, and ultimately neither of us wanted to make any extreme moves in the last turn, as we earn points for preserving our troops as much as taking out the enemy. I found my Specialists all earned their points, from the Engineer who repaired the Gecko to the Forward Observer who marked his target before being taken down.

Unit of the match? I would like to say the Hellcat for taking down Ajax or the Gecko for causing him so much trouble, but the Wildcat Link Team was probably the core of my victory - fixing the TAG, running a Data Scan on Ajax and holding the centre of the board. They achieved as much in denying Dave options as they did actually shooting or scoring points.

THE FUTURE
Game Five and the finale of the campaign will come in the next week, and we are both looking forward to it a great deal! 300pts each, with a scenario that calls for a lot more than just shooting, we will both need lists with lots of Specialists, troops that can activate and hold the Objectives. It should be exciting finish for this Escalation League, and lead us to the release of Operation: Icestorm and another new campaign - ultimately we intend to play through all nine of the ITS Missions and spend some time playing through the new Infinity starter set.

What models will hit the painting table next? I'm thinking... Intruders.