"Some weeks after the triumph at the Gates of Holsteinsborg and the lifting of the blockade of the Davis Strait, the Prussian Empire despatched reinforcements to support their Greenland-based raiding fleets. Featuring new ships with the latest technologies and weaponry developed by Prussian scientists, the Empire was ready to go on the offensive once more.

Their first target was the refuelling station at St. Anthony, site of a shameful defeat some months past that needed to be expunged. Their objective would be to deny the enemy any chance to escape by disabling their fastest ships, then deal with any defending capital ships before bombarding the station out of existence.

Against them, the Britannian Navy had stationed one of their Dominion fleets, the Royal Australian North Atlantic Reserve Squadron. They were supported by the Federated States of America, whose 18th Patrol Fleet had a small flotilla passing close by, and had picked up on the approach of the Prussian fleet some hours beforehand.

The stage was set for another titanic showdown...
- Echoes of Greenland - The Second Battle of St. Anthony
Naval Battles of 1872

The second game with the Second Edition, and time for some of the brand new Prussian ships to take to the sea and prove their worth. In this 1500pt game, my friend Mike will be using his Prussian Empire and borrowing some of my ships from the Prussian Naval Battle Group to make a force using all of the new toys. In turn, I will be using most of my Royal Australian fleet, and adding some ships from the Federated States of America to make a Grand Coalition alliance force.

Mike has a curiously familiar colour scheme for his Prussian fleet - he commissioned me to paint his fleet last year in the same scheme as my own. Combined with all the ships I've painted for myself, we probably have roughly 8,000pts together! In this game, he borrowed my Kaiser Karl-class Heavy Battleship, Elbe-class Fleet Carrier and squadron of Uhlan-class Cruisers. 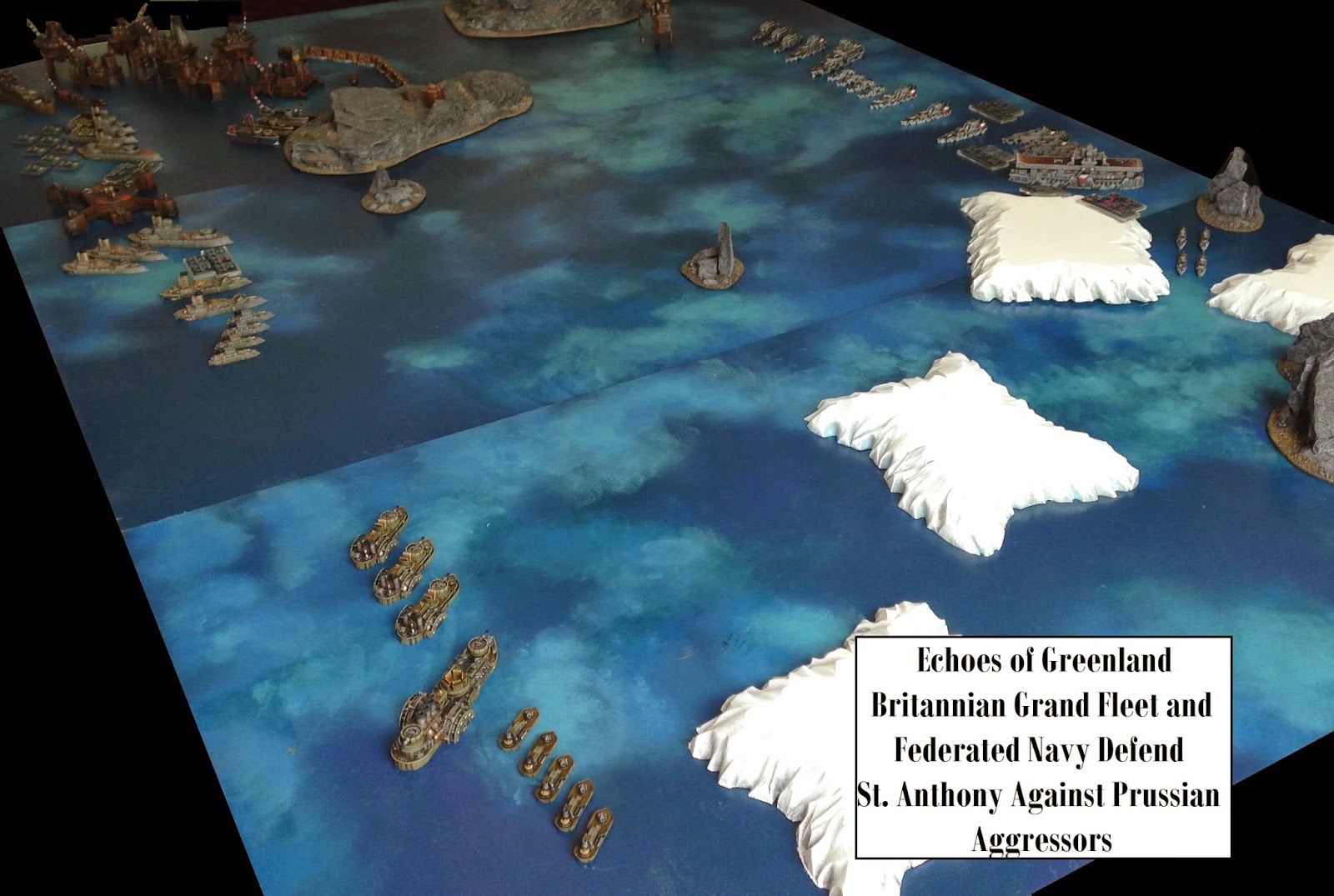 The board was set with icebergs and small islands scattered around, and a large formation of rigs and platforms on the side to represent the refuelling station of St. Anthony. The majority of the Australian fleet would be arranged to defend the station, while the Americans would be deployed on the other side of the zone as reinforcements rushing to aid their allies. The Prussian fleet had a large gap between the rocks and the ice floe to deploy, and concentrated the majority of their ships there. One squadron of Corvettes was placed in amongst the icebergs,where they could sneak forward without being seen.

For secretly drawn Field Objectives, Mike had to destroy all of my Small vessels and 50% of the fleet, an Objective that would not be particularly difficult looking at my fleet! Of course I was not aware of his Objective at this point. In turn, my Objective was to score 70% Victory Points - 1050pts in this case.

With the board set, it was time to explore the power of the new Royal Australians and the new Prussian ships in the open water!

One Squadron of five Revere-class Corvettes

Turn One was dominated by the swift movement of both fleets to the centre of the board, with the destruction of the lead Cerberus-class Battleship as the explosive highlight. The Grand Coalition have taken very little damage other than this, while the Prussian Empire have taken numerous hits across a number of their Medium squadrons.

A game-defining turn, some unexpectedly poor shooting from the Victoria-class Monitors has let the Prussians able to get in close with the Australian and American ships and really let loose with their Close Gunnery. Suffering damage to all three of their Medium squadrons, the Prussian Empire has lost 723 Victory Points by the end Turn Two, while scoring 715 Victory Points from the Grand Coalition. Crucially, however, the Prussian Empire has destroyed all of the enemy Small ships, and will only need to score another 35pts to achieve their Field Objective.

ENDGAME
Smashed from all angles, their Cruiser squadron engulfed in a massive explosion and the Monitor ships surrounded and sunk, the Grand Coalition fleet is a mess. Their surviving Battleships are both crippled, and their Submarines are empty. In turn, the Prussian Empire has paid dearly, losing nearly all of their squadrons except for the Heavy Battleship and Fleet Carrier, which are both remarkably undamaged.

The Prussian Empire has achieved its Objective, destroying the Frigates and Corvettes and scoring 1158 Victory Points. The Australian and American ships fought tenaciously, but were undone and have only scored 970 Victory Points.

Victory for the Prussian Empire!

CONCLUSIONS AND LEARNING POINTS
The Prussian Empire got good! Mike has a pretty poor track record with his Prussian fleet, while I have never lost a game before with my Australians... it seems with the new Edition the tables have turned!

Rugged Construction across the fleet and some great Close Gunnery made the Prussian Medium squadrons a nightmare to deal with, and their Heavy Battleship was indomitable - like facing a Dreadnought! Mike did well to smash any threats to his Large vessels early in the game, and throw as many ships down the centre as he could so my brutal Devastating Ordnance had few targets.

I was really impressed with Mike's fleet, both in rules and composition. So many Medium squadrons gave him the firepower and me an overwhelming number of targets, which is difficult for a fleet that works with few, but powerful guns. In a tactic similar to one I used against the Black Wolf Mercenaries in a previous game, taking several squadrons of ships with 5HP means the enemy cannot destroy opposition ships fast enough, and will get surrounded and shot.

My deployment and early activations were unhelpful - putting most of the fleet behind an island gave Mike the time to move his fleet forward and get into optimum range. I also put the Battleship forward too soon, resulting in the loss of a Cerberus on Turn One, as well as blocking the line of fire for the Australian fleet. The Americans were not presented with any good targets as they were out of position and too far along the flank - teach me for trying to set up something that looked good rather than what would work in the game! Ah, the narrative/competition balance.

Another great experience with Dystopian Wars 2.0 - as before, the new tiny flyer system is great, only a shame my fleet had no carriers. Gunnery is much more powerful now, and squadrons with lots of turrets like the Hussar-class Gunships are really worth their points.

NARRATIVE
"...the Prussian Empire scored a resounding victory at St. Anthony, destroying the Frigate and Corvette squadrons of the enemy and stopping them from escaping to report the attack. By the time Federacy reinforcements arrived, it was too late and the station was a flaming ruin."