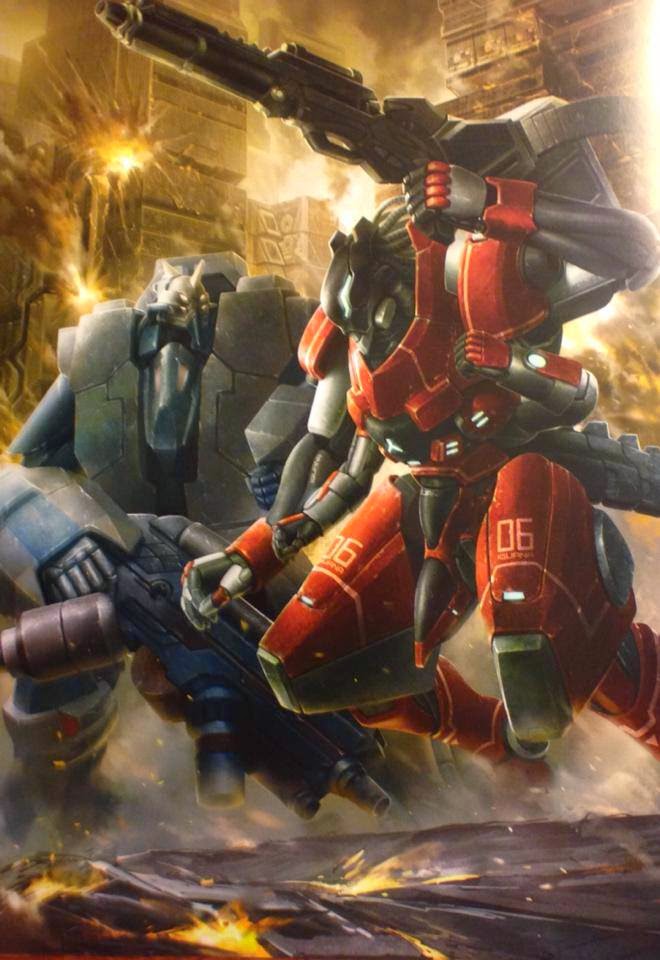 The League continues, and this time myself and Winner Dave played a 200pt game with Classified Objectives, adding a level of complexity that would take the game beyond just shooting at one another. With both of us needing to secure two secret objectives in addition to the standard shooting and killing, we would need to build teams that featured specialists with the correct skills - Engineers, Hackers, demolition experts and the like.

In the last game, Dave had me on the ropes when his Myrmidons took out both of my heavy weapon-toting troopers in the opening turn, but was then beaten back as a lone Wildcat took down three of the opposition with one attack and set his Lieutenant on fire. The game ending in my favour, the Escalation League so far had seen my Nomads earn TWELVE campaign points, while the soulless ALEPH sat with a total of FIVE.

4 SWC | 199 Points
I realised after the game that my list was illegal as their was no Hacker to allow me to take the two Remotes... oh dear.

My force was based around the Wildcat link team, with the Hellcat and the Remotes running interference that would distract and hopefully cut down some of the enemy while the Wildcats moved into position. The Tomcat Engineer and Alguacil Forward Observer were there for Objectives only, and would only get stuck in after they had done their jobs.

I took the Remotes rather than a Gecko (as was my original plan) because I had been working on a new list for an upcoming tournament that used two Remotes, and thought this would be a good chance to try them out.

Dave's force was equally specialised, but far more compact (as ALEPH tends to be). The Sophotect was his only real Specialist, and on her would rest most of his chances for achieving the Classified Objectives. Fortunately, the rest of the force was more than capable of murdering my team.

Dave won the roll and elected for me to go first, but before that he deployed his Netrods - one scattered off the board and was lost - first blood to me! Opening moves were short and tense - the Wildcats moved up toward the red cargo pod on the right side of the board, while the Lunokhod Remote moved up on the other flank and the Reaktion Zond found a good spot on top of a building. ALEPH was out of sight at this point, so I concentrated on my Objectives - the Alguacil opened proceedings by Marking a Netrod and achieving my Telemetry Objective. The Tomcat then moved on from the side of the board using his Aerial Deployment and laid a Demolition Charge on the cargo pod - one Order to detonate and my Sabotage Objective had been achieved!

A great start for the Nomads, but now ALEPH had the initiative and some of my models were out of position. His Naga opened proceedings, laying a mine before attacking the Alguacil that had Marked the Netrod - he failed the Face-to-Face roll and was wounded, but with his Dogged rule the Naga would not fall unconscious as long as Dave kept pumping Orders into him!

In a nightmare string of orders, the Naga sprang forward and took down two of the Wildcats with his Boarding Shotgun, including my Spitfire-wielding trooper. Would I never get to fire that Spitfire? He then shot down the Alguacil that had wounded him before passing out, but it was a massacre - three important troops gone in the opening phase of Dave's first turn. Across the board, Eudoros shot down the Lunokhod Sputnik, and several of the Myrmidons moved up the board.

Turn Two and the Nomads were on the back foot. The Hellcat landed behind enemy lines and scored a wound on Eudoros, but his No Wound Incapacitation meant he kept fighting. The Tomcat Engineer took out one of the Netrods and then tried to attack the Sophotect that had advanced up the board, but failed. The Wildcat Lieutenant advanced to shoot one of the Myrmidons but badly misjudged the distance and was caught in the blast of an anti-personnel mine, which took him out. Great turn!

In Dave's second turn, the Myrmidons and their Lieutenant surrounded the Hellcat. Some poor rolls followed as I chose to shoot back rather than Dodge, and he was taken out. Eudoros then headed toward my board edge, and was caught in the sights of the Reaktion Zond... who did nothing. His Sophotect took out the Tomcat Engineer with her Combi Rifle, and then, following my Third Turn where my two surviving models fled into deep cover, scored her Objective by placing a Demolition Charge against her target building. The game ended here.

THE RESULTS
A bloody mess for the Nomad Nation, taking out only one Naga and two Netrods for the loss of almost their entire team, but they did score both of their Classified Objectives!

My force was trashed in this game - I used the Lunokhod poorly and looking back, there were a couple of occasions where a Dodge would have been much better than trying to shoot back - with the combination of negatives due to Optical Disruptors, cover and the like, I was needing a 1 to hit. I was happy with my Objectives though, and it shows in the final score that they are VERY important in this game.

A surprisingly close final score despite the complete massacre Dave achieved - this really shows the power of the Objectives! Nonetheless, things are decidedly closer in the League now, and the final two games will be interesting, especially since Dave seems to have learned how to use his troops to their full effectiveness. I... still need some practise.


THE FUTURE
As mentioned in the previous post, Winner Dave and myself have signed up for a tournament which is coming next weekend. 300pts with ITS scenarios and Classified Objectives, it should be a shock to the system for us both, and will hopefully teach us a lot about the game. I'm looking forward to it a great deal, and have been feverishly painting as fast as I can to have an impressive team to show off - if I can't win any games, I at least want to look good.

More discussion, pictures and thoughts on the tournament in an upcoming post. In the mean time...