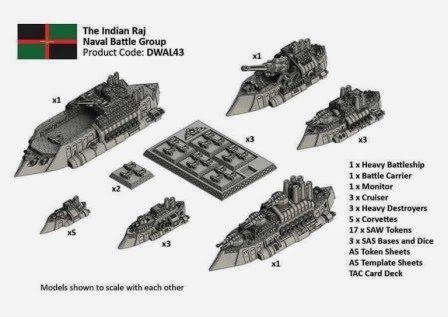 Any good follower of Spartan Games should already know this, if not from Facebook and other social media outlets then from the hard-working guys over at Element 270, but there are a few new things coming soon for Dystopian Wars! Following the new Naval Battle Groups and Aerial Battle Groups released over  the past two months, it seems that the Alliance Nations will be getting some love.

A whole new Nation is the biggest news, the Raj making their appearance in the Pre-Order section of the Online Store a few weeks ago. Suffice to say, I was impressed, and the close up shots released recently (and shown below) were the final straw... yet another fleet is winging its way over. I am hoping to ally them with my Royal Australians and may some of the East India Merchant Company as representatives for the Kingdom of Britannia, a Nation I have not yet invested in.

In other news, however, the spies in the Spartan HQ have revealed what will be appearing after the Raj... looks like some love for the Chinese Federation and the Polish-Lithuanian Commonwealth!

In other news, Spartan have finally released the new vessels individually or by squadron in their Parts Service, enabling you to buy some more of the new vessels without having to worry about spending too much or doubling up on older models you already own. I have ordered a few ships to complement my existing fleets, and some extra Battle Cruisers as they are my favourite vessels in 2.0! Expect updates to a few of the fleets in August/September.

Another new item released this week with the Parts Service were these excellent Mines. As a Kingdom of Denmark player, it felt right to throw some onto my order. I'm looking forward to painting some more ocean - the textured base for the Boston-class Submarine was a real joy to paint.

Not the most informative post I'm afraid, especially for those of you who read Element 270 (check it out if you don't, great blog!). It reads a bit like a shopping list for me, I'm afraid...

This week I have been tearing my hair out trying to paint a team for a coming Infinity tournament and my Dystopian Wars fleets have fallen by the wayside. After this weekend, it is full steam ahead on the Painting Challenge project, and some more vessels for the Federated States of America if I have time.