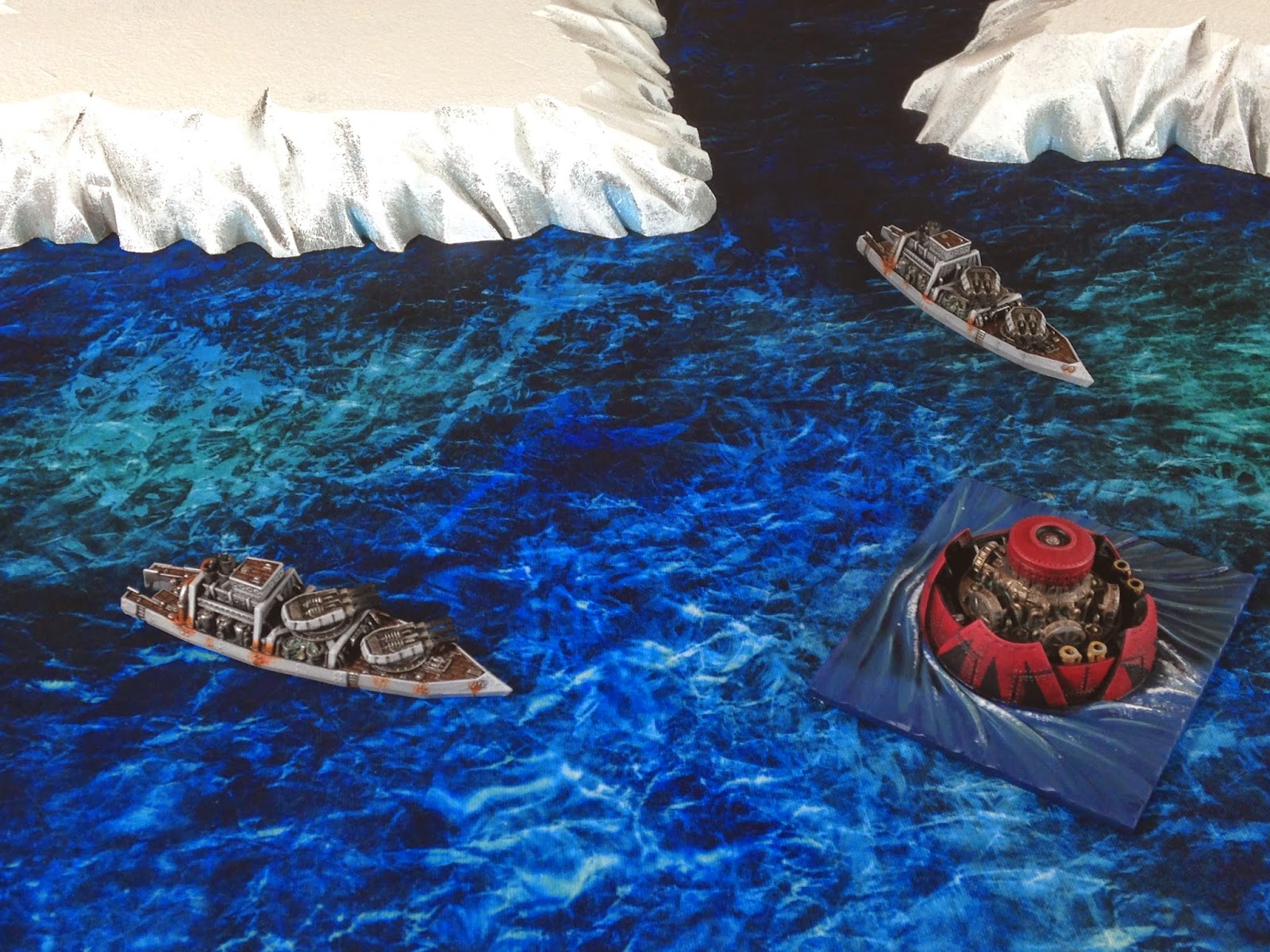 A new fleet and a new opponent for the latest Battle Report, my friend Goth Craig has decided to give Dystopian Wars a go, and after a couple of small practise games, we're ready for something a little bit more substantial! 1000pts per side, on a 4x4 table, nice and simple.

This is an introductory game as much as anything, but I would be doing Craig a disservice to say I held back and let him have the win! Honestly it was a close fought game, and some of the dice rolling (for both of us) was ridiculous. Overall we had a good time, and I think it was a nice introduction for him. He's certainly interested in playing again, which was the real intention. 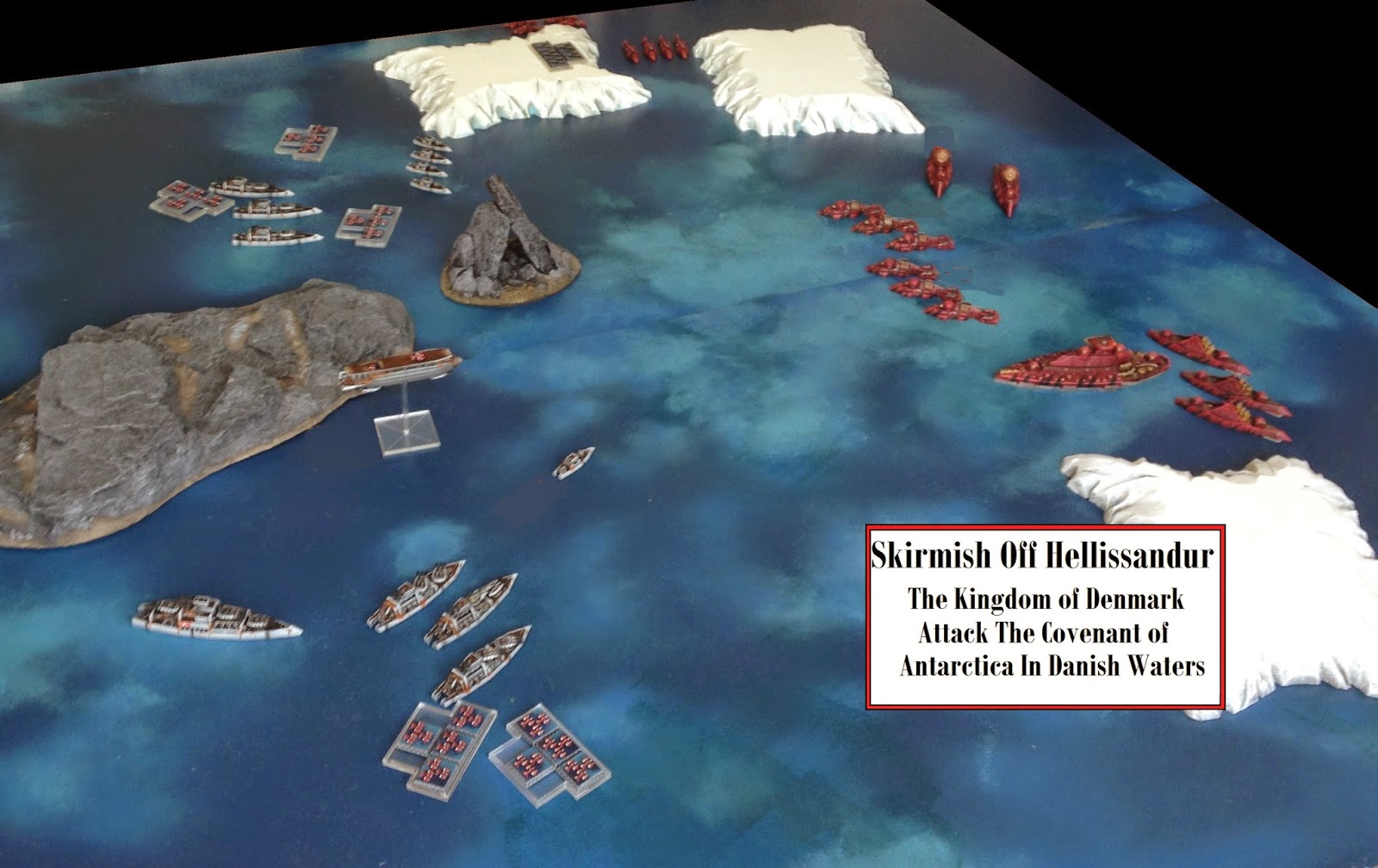 We did not pick any Field Objectives, as I imagined a straight skirmish would be fine for a practise game like this. The board was set with a central island and some drifting icebergs, nothing too complicated, with the Danish fleet moving on around the rocks while the Covenant fleet deployed down the centre, between two icebergs.

Craig's Fleet
The Covenant of Antarctica
One Aristotle-class Battleship

ENDGAME
The game ended at that poitn due to time constraints, but looking at the Victory Points things had definitely fallen in the Covenant's favour - Craig had scored 670 Victory Points while the Kingdom of Denmark had only managed 235 Victory Points. A decisive victory for the Covenant!

Had the game continued, the Kingdom of Denmark may have managed to damage or destroy a few more of the Heavy Destroyers and may have even finished off the crippled Aristotle, but this would rely on some good rolls on my part!

CONCLUSIONS AND LEARNING POINTS
The Covenant of Antarctica proved their value at long range, especially the Fresnel-class Gunships! The Heavy Destroyers were probably his MVPs though, soaking up so much damage and throwing out some serious firepower with their turrets and broadsides. Overall, all of their squadrons achieved something worthwhile, while the Kingdom of Denmark suffered from some poor dice rolls and bad positioning.

My own playstyle with the Kingdom was pretty poor - I should have used the terrain to shield myself more, and Linked a few turrets where I had taken the risk to spread out my fire - not a good idea against Shield Generators with Inventive Scientists! Rules-wise the Kingdom work in a manner virtually unchanged from last edition. In future games, however, I am looking forward to supplementing their squadrons with some Lend-Lease Prussian ships, like the Emperor, Konigsberg and Stolz.

Losing the Fafnir-class Light Sky Fortresses so early in the game was bad form, especially with their two turrets each. Their tiny flyer squadrons were also not used, as they were placed too far away from the Covenant fleet. If we had reached three turns they would have made their mark, but that was too late.

The mine placement seemed like a good idea at the time, but again Craig held back with his fleet and I got greedy, placing them too far forward and too early where they would be relatively ineffective. Losing most of the Mine Layers before they could drop their mines was also a blow.

Particle Accelerators are mean! Anything that can strike more than one ship at once is always a psychological nightmare, regardless of true effectiveness.

Overall a bloody but informative game, always a lot of fun playing against Craig even when his long-range ships make a mess of my decidedly short-range fleet! Looking forward to the next, bigger game.

THE NARRATIVE
"...Patrol Group Knarr was smashed at Hellissandur and the Covenant of Antarctica continued their mysterious activities, generating huge energy readings that could be picked up across the globe. The Danes may have been the first Nation to react to this potential threat, but they would not be the last, and the Covenant now faced scrutiny from all of the Great Powers of the Northern Hemisphere..."