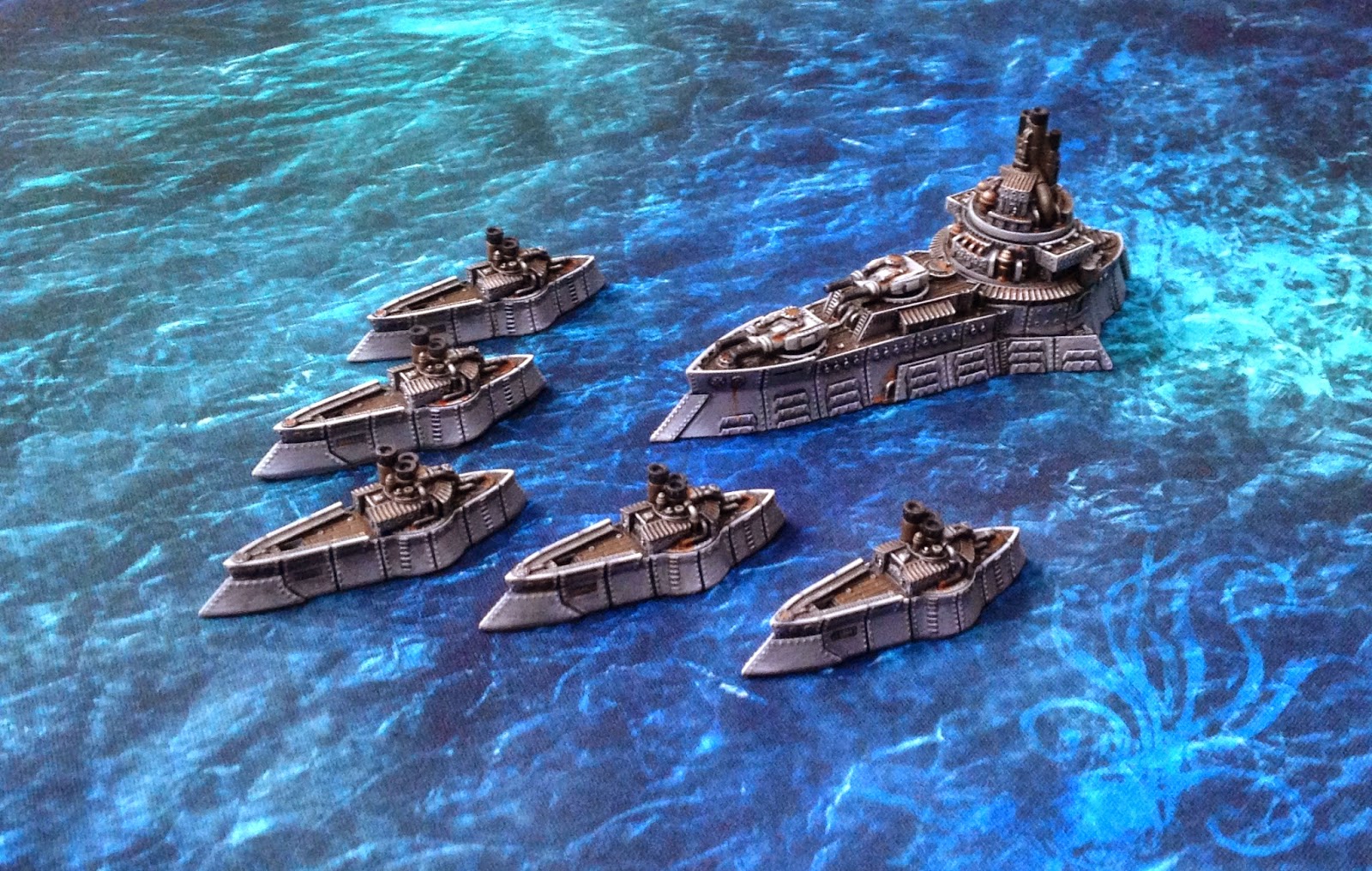 Welcome to Battle Report Nineteen for Full Spectrum Dominance, and the return of my old foe Ben to the field with his Federated States of America. Against him, I have managed to get the Russian Coalition ready - only a 950pt fleet, but enough for a small exhibition match to end the year.

Playing with smaller fleets, we have set-up a smaller board, albeit one with a large amount to terrain to represent the treacherous icebergs that the two fleets will duel amongst. Amidst the confusion of the ice and the proximity of the island, the two supposed allies will face one another.

Drawing Secret Objectives, Ben chose to settle for the easy choice and aim to destroy seventy percent of the fleet value - a touch prospect with the impressive armour of the Russian Coalition, but perhaps easier than targeting one particular class of ship given my fleet roster. In turn, the Russian Coalition would have to capture or destroy fifty percent of Ben's fleet, and take out his Commodore - in this case, the San Francisco-class Assault Carrier. My experience with destroying Carriers is not fantastic, but given the aggressive role of the Assault Carrier, it would be unusual for Ben to hide it out of harm's way - all I need to do is not reveal my Objective too soon!

One Borodino-class Battleship with Mimic Generator
One Dudinka-class Assault Carrier with Glacier Generator, carrying one Recon Plane and one squadron of five Dive Bombers

One Boston-class Attack Submarine accompanied by six Turtle-class Assault Submersibles
One San Francisco-class Assault Carrier with Rocket Battery, with one Recon Plane and one squadron of five Dive Bombers

AFTERMATH
After a furiously bloody two turns, the game was over and the Russian Coalition stood victorious, having achieved their Secret Objective in destroying the Commodore's vessel and scoring a total of 635 Victory Points. In turn, the Federated States had slowed the Russian onslaught but only scored 340 Victory Points.

Had the game continued, the Russians would have lost a great deal more as their ships were battered and positioned close to one another, but in turn the Americans would have sacrificed a great deal of their surviving ships. It was always going to be a difficult game for Ben, especially when the Destroyers and Assault Carrier managed to score so many hits on his flagship and smash it in two rounds of shooting, and the Battle Cruiser was lost to Boarding in the same turn. The terrain was in the Russian favour, and next time, we will aim for a bigger board and less dense placement of the islands and icebergs.

THE NARRATIVE
"...the chaos that followed the engagement at Kiska threatened the stability of the entire Grand Coaltion - this despite initial reports from both governments denying any action had even occurred. Agitators pressed the issue and roused the general populace, seemingly intent on causing a major diplomatic incident. Their mutual enemies in the Imperial Bond preyed on the weakness to try and divide the Great Powers, attributing many of their own attacks to the Russians or Americans in an attempt to cause greater confusion.

Neither side were willing to make concessions, but following a series of secret meetings it was decided that the two fleets had "engaged briefly" following false information of a marauding Blazing Sun fleet in the area. The attack was labelled as a "gross accident," and for a time, the fire that threatened to engulf the alliance of the Russian Coalition and the Federacy burned low once more..."

Till the next time!