Part Three of the Wolf Pack Flotilla breakdown (see Part One and Two here) sees the Donnerfaust-class Support Cruiser take the centre stage, the place it belongs (despite it's classification as a Support Cruiser...). The ship that redefined the Prussian Medium class and brought Tesla weaponry into the forefront of Prussian tactics, the Donnerfaust is an excellent investment for any Prussian Commodore. 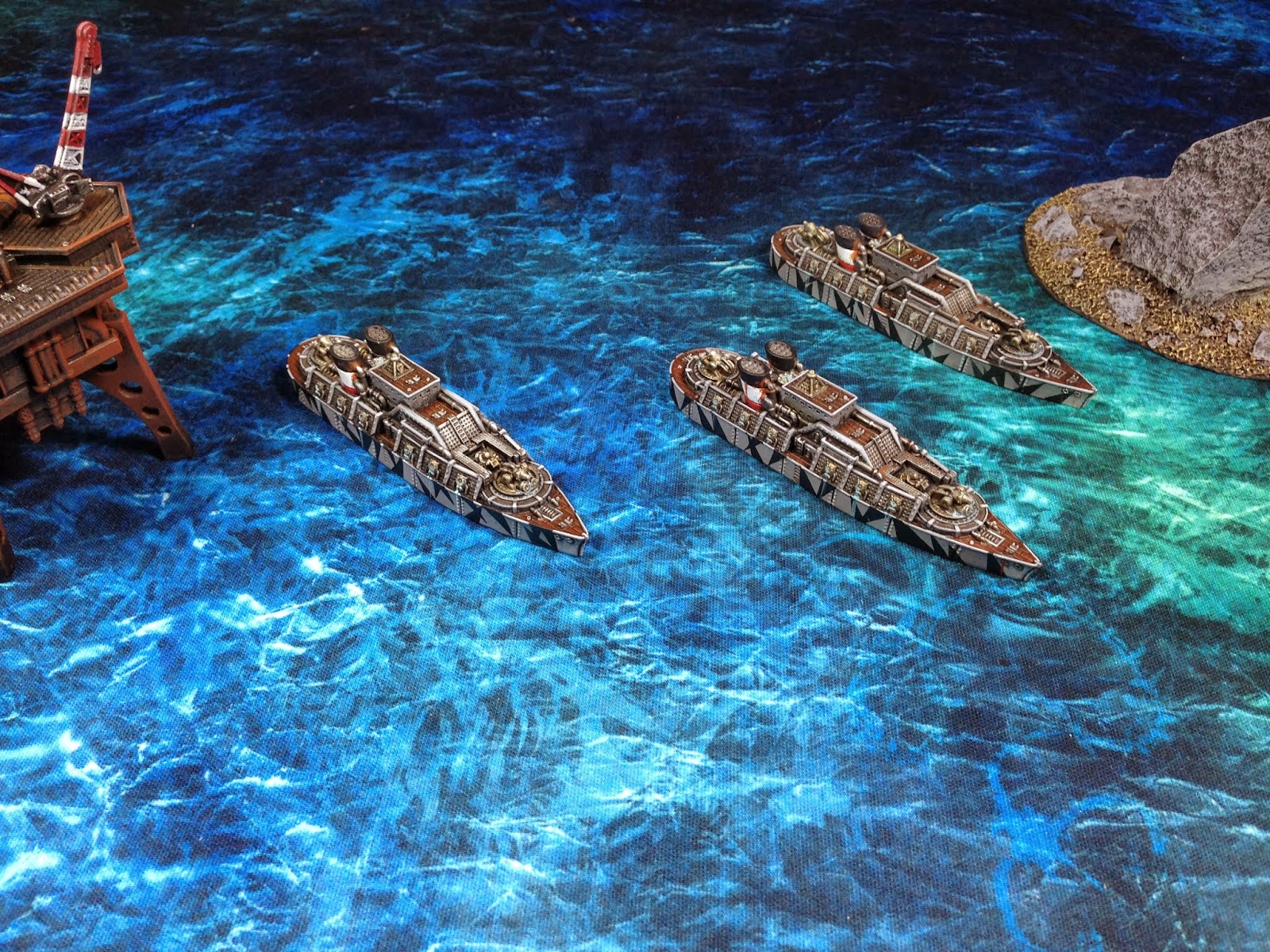 The Donnerfaust brings with it all the class hallmarks of the other Prussian Medium ships with elements of the Rhine-class Fleet Carrier and the Konigsberg-class Battlecruiser, as well as some of the best defined close details in the Dystopian Wars range. Special attention had to be given to the pipework and Tesla-weaponry of the Donnerfaust as it plays such a large role on the model, most crucially the Speerschleuders at the fore and aft, and the broadside Tesla projectors.

With all this close detail, I wanted to make sure the Donnerfaust would not look "busy," so made sure the weathering and more unusual elements of the Tesla-weaponry did not overwhelm the colour scheme. I kept in mind at all times that these were Support Cruisers, and it was perfectly reasonable for them not to be centrepieces of the fleet; leave that to the Dreadnoughts and special technologies like the Sturmbringer.

IN THE GAME
With powerful Speerscheluders and a Tesla-broadside, all of which are Redoubtable, the Donnerfaust is incredibly dangerous even when down to its last hit point. Offensively the only Medium that can compare to a full squadron of Donnerfaust is a Konigsberg attached to Hussars and utilising Close Gunnery, but they don't get all the bonuses of working with Tesla! With the strength of their weaponry, the ability to reach RB3 and the 360-degree threat radius, the Donnerfaust are offensively incredible... and this is without even mentioning that each ship carries a Tesla Generator, which can benefit from the Lightning Rod as well.

As a Support Cruiser, the Donnerfaust can operate as an Attachment to other Naval squadrons - an interesting rule but ultimately not one I have exploited much - the problem being I like to run them as an entire squadron so I can roll buckets of dice! The Lightning Rod that the Speerschleuders fire helps the Tesla-weaponry of other ships and can be linked with as well, but on the Reiver-class Cruiser I feel this is a limited benefit given the poor strength of their Tesla. This is utterly wasted on the Hussar given their focus on traditional gunnery, while the Konigsberg is limited in it's potential by its two main turrets and preference for forward firepower - the Donnerfaust works best showing its broadside, and while the Konigsberg does have a broadside, I tend to find myself using it aiming straight forwards. Obviously some more thought and playtesting is needed! As an Attachment to other ships, such as the Dreadnought or Fleet Carrier, I have no experience, as I used to think it could only attach to a Medium squadron.

Defensively, the Donnerfaust is excellent - average DR and CR but Redoubtable weapons, an extra HP over other Cruisers and Rugged Construction - a potent MAR I think I have remembered maybe once in the past six months. Electrical Defences is also very helpful given their slightly under average crew rating, keeping them safe when opponents start thinking about Prizing them for easy Victory Points. The powerful weaponry, generators and defensive measure do not come cheap - each Donnerfaust weighs in at the same price as a Hussar-class Gunship.

Overall I find the Donnerfaust to be an excellent choice for any size game, and cannot remember the last time I played a game without them. The cornerstone of my Tesla-based lists, they bring impressive firepower and a bucketload of helpful, supporting MARs to the fleet.

Take as a full squadron, I let the small squadrons and robots march forward while the Donnerfaust snake along a flank, readying for the moment they can shoot forward and open up with all of their weapon system at once. Keep their broadsides open and get ready to Cross the T! Nothing is quite as fun as rolling all the dice a Donnerfaust squadron can muster, and pouring out handfuls of tokens to mark all the Lightning Rods, Lethal Strikes and damage inflicted.

SO WHAT DO THEY BRING TO THE TABLE?
THE GOOD
• Fantastic weaponry, with a strong AD spread and surprising power in RB3, plus Redoubtable
• Force Multiplier with the Lightning Rod MAR on two of its weapons
• Tesla Generator!
• Survivable in the long term, with Rugged Construction and 5HP

THE BAD
• High points cost - not saying it's too high, but they are a lot of Victory Points when Lost or Prized
• Low AP - Electrical Defences help, but not on the offence
• Fragility in the short term. Beyond Rugged Construction, they still have average DR and CR statistics

WILDCARD
• For full effect, you need to position the entire squadron to show its broadside - sometimes difficult to manage with a forward-facing, attacking fleet like the Prussians. Watch out for getting them all into the right Range Bands as well!

WOLF PACK
This was the final instalment of the Wolf Pack Flotilla discussion; hopefully it has convinced any new Prussian players out there that this box is something worth investing in, and any lapsed Prussian veterans that the fleet has been given a new lease of life! It's not the most expensive box in the world; you get a good chunk of resin regardless of whether you'll use it all. Adding up to 505pts for £30.00 (less if you use online retailers with discount), I'd say this boxset is pretty good value. I may not have used the Strike Bombers that much, but in the long term the Sturmbringer and the Donnerfaust have become mainstays of the fleet.