The Future Belongs To The Mad

WORKING ON SOME MAD MAX-THEMED VEHICLES FOR DROPZONE COMMANDER

One of the first reasons I chose the Resistance for Dropzone Commander was the release of Mad Max: Fury Road in cinemas, and now some months later we see the Blu-Ray/DVD release imminent. To celebrate (and to give me something interesting to work on while painting my Resistance forces) I've been building some Mad Max-themed vehicles and Objective Markers, with the intention of getting them ready for an upcoming tournament.

I have only done a few so far, but intend to work on a couple more of the iconic vehicles in the coming weeks, once I can source the parts. As a caveat these are not intended to be 100% faithful copies of the movie vehicles, especially given the limitations of the scale. Some of them, such as the Bullet Farmer's Peacemaker, are deliberately bigger to make them look bigger/cooler (if that's even possible!) for the gaming table.

First things first - check out this blog on all the monstrous vehicles from Fury Road - a really great source of pictures that gives an inkling of the amount of effort put into making the movie!

Another great resource has been Dave Taylor's work on bringing Mad Max to the table (albeit at a slightly larger scale). His work, especially on Max's V8 Interceptor, was a powerful influence on how I would proceed, and gave some great advice. 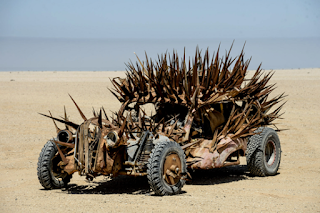 THE BUZZARDS
In the opening chase of the movie, the War Rig is attacked by the Buzzards, a roving band of scarred, bandage-wrapped Russian-speaking (in Australia?) marauders who have lost all semblance of sanity and covered their cars in spikes and buzzsaws. I do intend to convert up a proper Excavator to lead them, but for now I have a selection of spiky cars that were painted as rusty and battered as possible to resemble the Buzzards. The spikes were taken from various sources, with the majority coming from spare Dark Eldar kits I had from my old Games Workshop days.

Gaming-wise I wish to run them as Gun or Rocket Technicals, mixed in with unconverted models to ease any confusion. 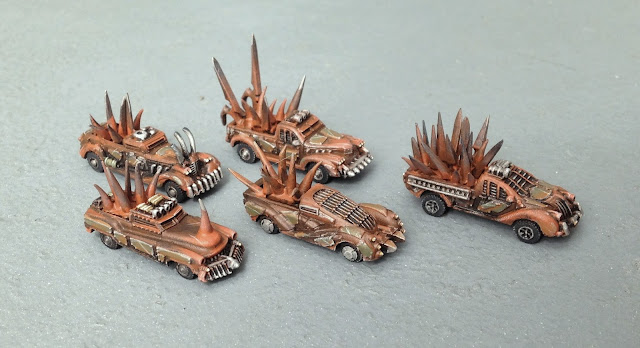 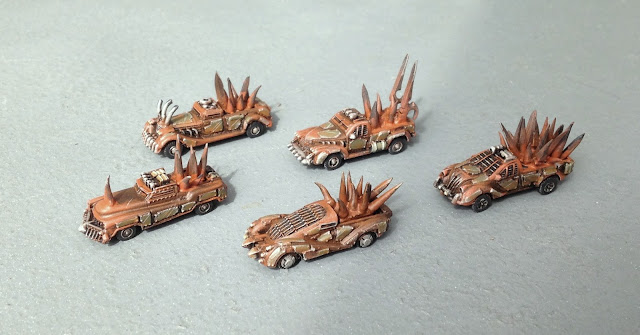 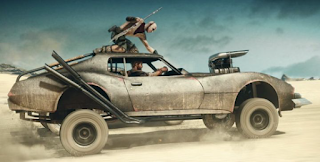 PURSUIT VEHICLES
Immortan Joe's huge fleet of cars are referred to as "pursuit vehicles" and this was what I had in mind when converting some of the Gun and Rocket Technicals. Knowing I would want to field twenty four of them, I wanted to avoid replication and so chose to modify a few with extra engines and details. In the game they can be Rocket of Gun Technicals, so long as my opponent agrees.

These are the first few completed examples, and though they are not directly influenced by the cars from the movie, they do offer something nitro-boosted and ready to ride full-throttle down the Fury Road! 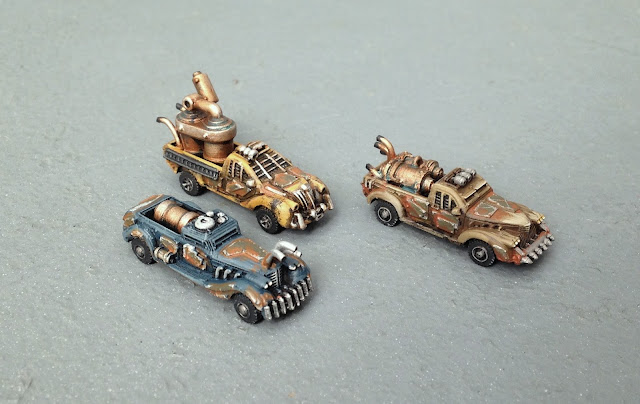 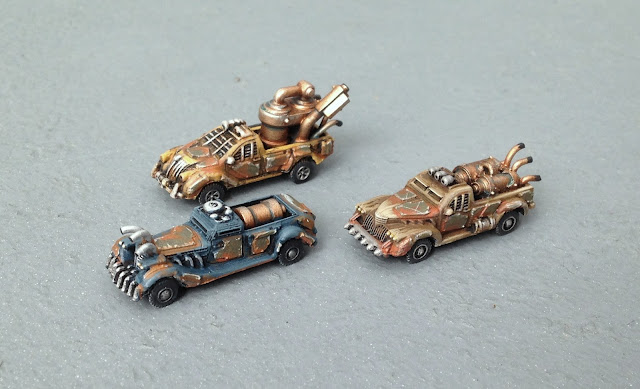 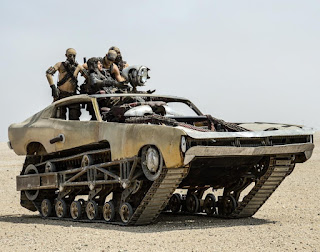 THE PEACEMAKER
The character of the "Bullet Farmer" drives the distinctive Peacemaker into battle, a modified How and Howe Ripsaw EV1 (Extreme Vehicle 1) with the body of a Valiant Charger mounted on top of the chassis. An amazing all-terrain vehicle, it was known to be the most dangerous vehicle on the set of the movie.

Orginally I modelled it very close to the original design (using tracks from a UCM Fireblade and the body from an n-scale car), but it was very small and did not look particularly imposing alongside the trucks and tanks of the Resistance. Sacrificing another Fireblade, I modelled the car body in the middle of the tracks and placed a machine gunner in the rear of the vehicle, before bulking out the front and rear with extra exhausts and weaponry. It might not match the sleek viciousness of the original, but I am happy with the result and hope people will recognise it. 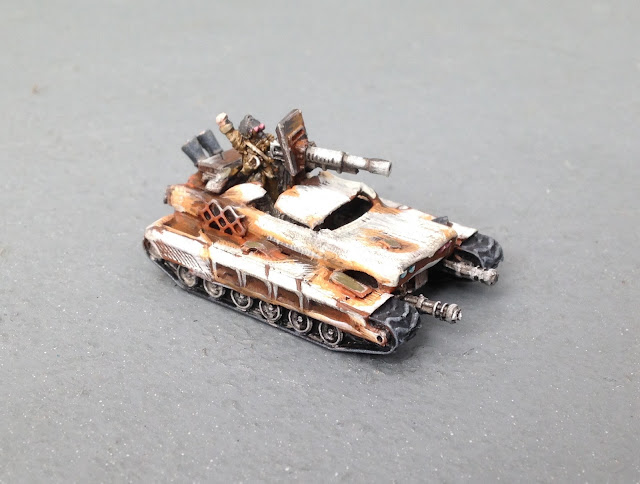 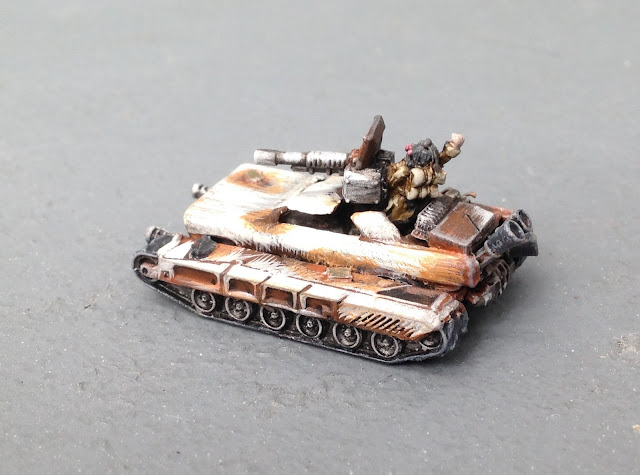 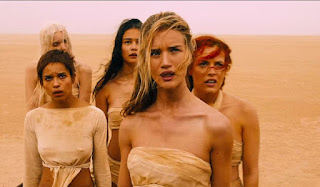 THE WIVES
Not a car this time, but an Objective Marker, I needed Immortan Joe's five Wives to make an appearance in some form, and decided a scenic base would suit. I intend to use it in the game as Focal Point, or perhaps as a small base of Sirens should I use the special character Salakahn, Tyrant of Atlantia, who allows the use of one base with a special Command Card. The models are all Sirens, painted with white clothing and hair to match the five Wives from the movie. Other than that they are pretty much unchanged, though I did position one to look like she was using bolt cutters to remove the chastity belt from her colleague, as in the movie. 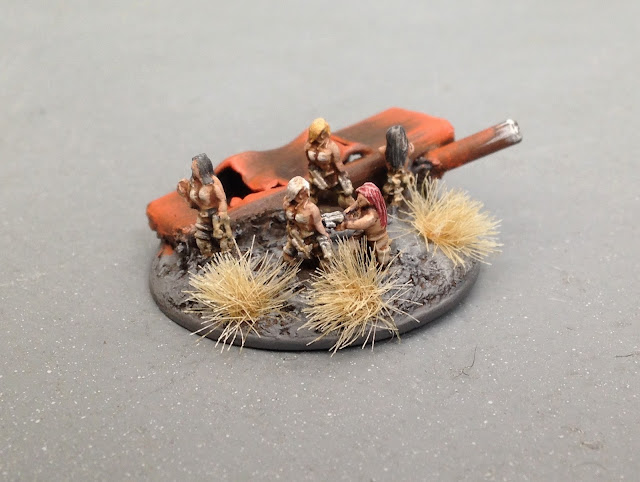 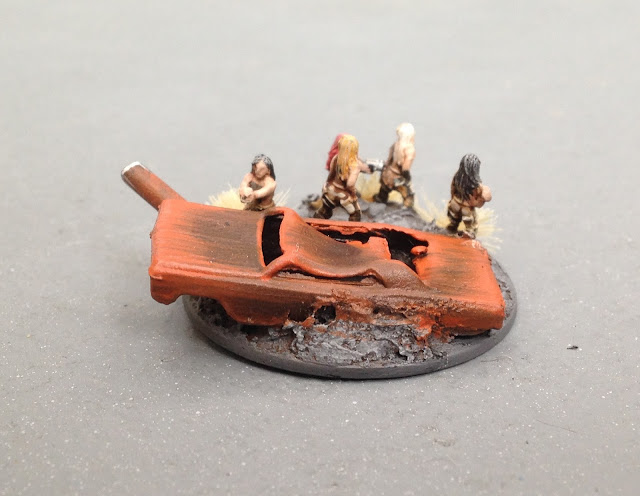 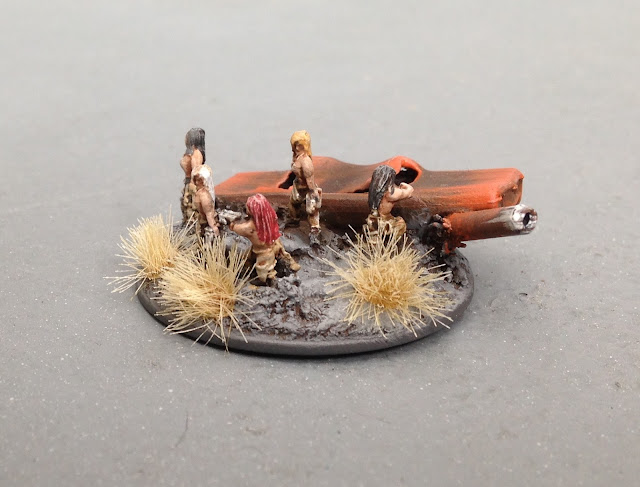 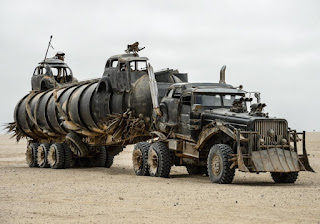 THE WAR RIG
I have a dedicated blog post on how the War Rig was built, and needless to say I am very happy with how it has turned out. Painting has not finished yet, but I fear it will be a difficult and laborious process as I want to make it close to the movie without standing completely apart from the rest of the army.

In the game, I want to use it as a Battle Bus with upgraded guns, and though it might be a bit longer, overall it looks the part. It has not made it to the gaming table yet, but we shall see how it does soon enough! 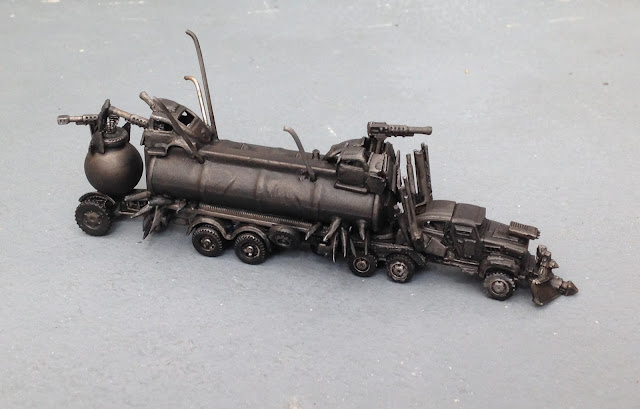 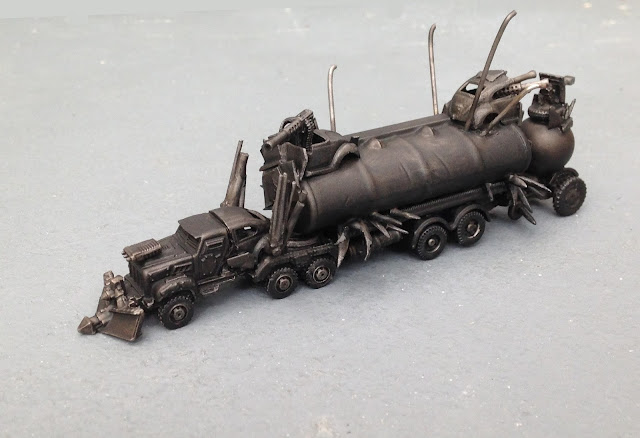 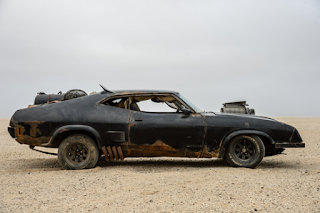 THE LAST OF THE V8 INTERCEPTORS
Max's signature car, the Pursuit Special was originally a modified 1973 Ford Falcon XB GT, though I was forced to use a different model of car for this miniature as there are no Ford Falcons in this scale/price range. Nonetheless, I think it works well and is recognisable. The finish model and paint job is more reminiscent of the first Mad Max movies than the battered Interceptor in Fury Road, but it is still slightly weathered and dusty.

In the game, I intend to use it like the Wives - an Objective Marker or Focal Point. Such an awesome car is simply too valuable for my Warlord to ignore, obviously! 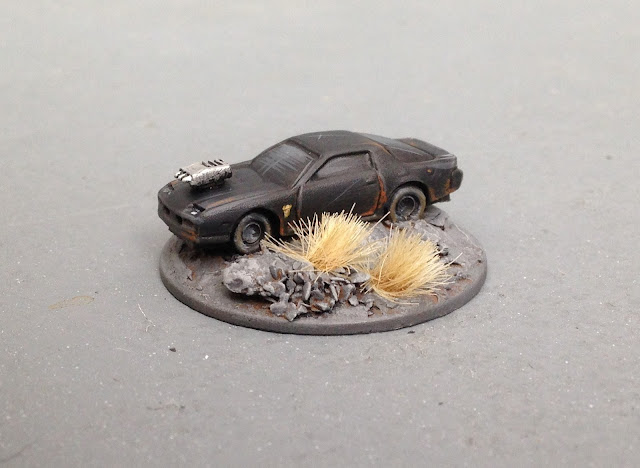 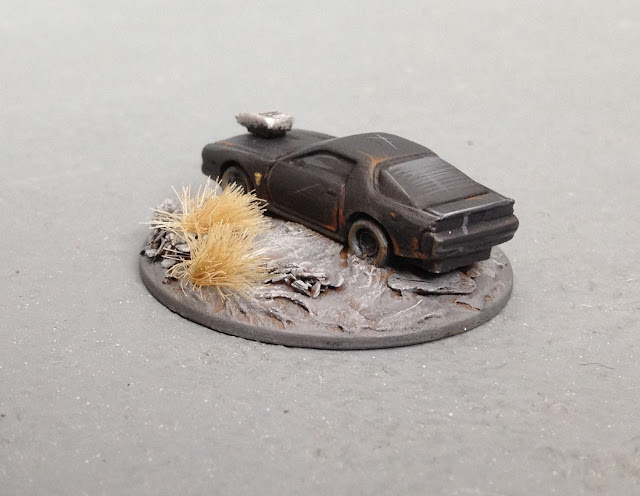 So there we are! A good start so far. The obvious contenders for future projects will be the Buzzard Excavator, the Gigahorse and the Doof Wagon. Now to find the parts!