Infinity Escalation League 2017 - Round One

A RETURN TO INFINITY WITH A NEW LEAGUE 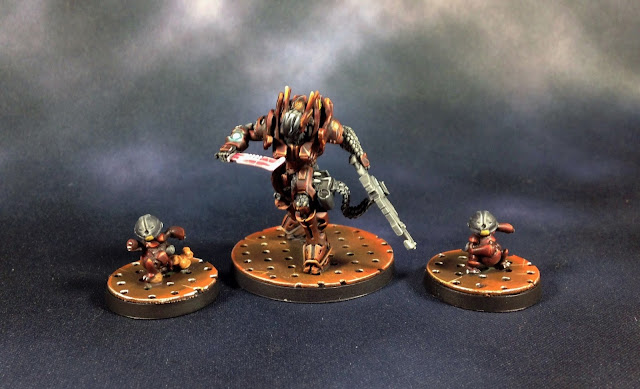 The past few months I have had a bit of a Renaissance with Infinity, playing a good number of games in the lead-up to and during Strikezone: Wotan, as well as a recent tournament you may have read about back in June. This has largely been driven by the return to wargaming of an old friend Simon, and the opening of a new local gaming store, where he has been pushing Infinity rather hard.

I've become a little disillusioned with the tournament scene for Infinity, something the recent tournament really hammered home, so it has been nice to run a slightly more casual style of game against a large number of new opponents. Some of these guys have really caught on to the system, and I've had some brilliant games in recent weeks.

This week, Simon has started a new Escalation League for the new store, straight out of the book with no special rules or points system. For the fourth (?) time, the High Rollers will be running out, but this time in a slightly different form. In an effort to try out some distinctly non-Corregidor miniatures I will be trying out Vanilla Nomads for a few games.

The first mission is a simple Annihilation, with a limit of 120pts and two SWC. No Lieutenants, Hacking or Command Tokens. I chose the team around the Taskmaster - the most recently painted model for the team and a firm favourite. Rules-wise he is stacked with equipment and special rules, but crucially he is a Heavy Infantryman with a Shock-ammunition packed Red Fury and a pair of Crazy Koalas. Funneling my Orders into this guy would cause a lot of trouble for my opponent.

I drew Joe for the first match, an old foe who I have always struggled against in the past. He was running a brand new Onyx Contact Force, based around a four-man Link Team of Unidrons with Plasma Carbines, an Umbra Samaritan with Spitfire, Q-Drone (Total Reaction) with Plasma Rifle and two Imetrons. A vicious little force - seven Orders, and the majority Remotes so my Shock-ammunition was useless. Hmmmm,

I elected to take the initiative, and quickly lost my Alguacile with HMG to a lucky Critical Hit from the Q-drone. Not a great start. The game then immediately went back into my favour and stayed there, as the Taskmaster drew a bead on the Unidrons and cut them down one-by-one, then smashed apart the Q-drone and left Joe with only the Samaritan and two Imetrons.

The Samaritan tried his best, scoring two hits with the Spitfire that bounced off the armour of the Taskmaster before Dodging forward to avoid the Crazy Koalas and get close. He avoided the eager Koalas but took a Shock-round to the chest and was out of action. Joe was left with two Imetrons, and the game ended 10 - 0 Victory. Good start to the campaign!

The Taskmaster is a lovely piece of kit, bolstered by my excellent dice rolls. Joe was unfortunate to deploy his Link Team so far forward, leaving them out of cover and in a position where the Taskmaster could draw Line-of-Sight to one at a time. I'm looking forward to featuring him in future lists, but also running the new Kriza Borac, Special Crisis Unit. Hopefully my copy of Beyond Icestorm will be here this week, in time for me to get it built and on the field!