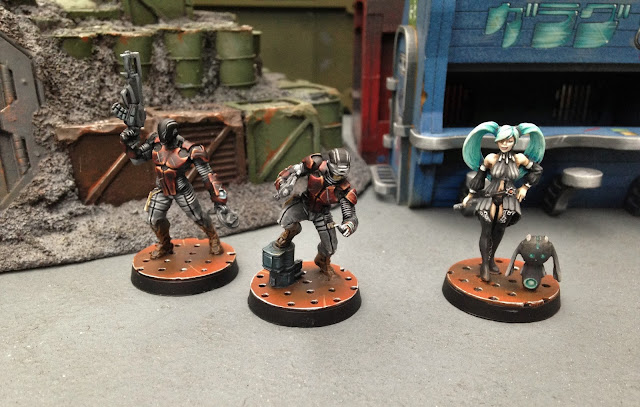 The conclusion of the Infinity Escalation League started all those months ago... apologies for the late update but I figured I could get the whole thing done in one post! Peppered throughout the post will be some of the new models painted for the League, most of whom have not been seen on the blog before.

ROUND TWO
For the Second Round I was due to play against the local Tohaa nastiness, but due to other commitments and general failure to turn up I managed a game against the Bakunin Jurisdictional Command under Milou. She was a relatively new player who had nonetheless garnered a bit of a reputation and racked up a number of goods wins with her Nomads.

Bakunin were an unknown quantity to me - I had researched them a lot on paper, but rarely seen them out in the field. They pack a lot of tricks, with things like Neurocinetics on the Sin-Eaters, infiltrating nasties like the Zeros and Prowlers, messy Uberfallkommandos and the recently utilised Taskmaster, to say nothing of the Optical Disrupter-enhanced Sisters of the Observance.

For this match I had gone against all reason and tried as hard as I could to fit in the monstrous Kriza Borac Special Crisis Unit with Mk12. Eating up nearly half of my points, the rest were funnelled into a good number of Order-generating Alguaciles, a Jaguar and a Spitfire-packing Hellcat. This guy would be the ace in the hole - carving up the rear while the Kriza Borac drew fire to the front. The mission was 150pts, with Lieutenants but no other Advanced Rules.

Against me, Milou deployed four camouflage tokens and six Moderators, one clearly a Lieutenant off on his own hiding atop a building, and a five-man Link Team with a Spitfire. The camo markers were probably Zeros or Prowlers - I knew Milou liked to run a Prowler with a Spitfire, and no doubt one or two of the markers were Mines deployed by Minelayers. A difficult prospect. The deployment saw the markers running down the centre of the board, while the Moderators hid at the back. My own force was more spread out, with the Kriza Borac holding the centre.

The game began with the High Rollers taking the initiative, the Hellcat catching Milou unawares and ambushing the Moderator Link Team. He brought down the Link leader, breaking the Link permanently as we had no Command Tokens in this mission, but when he moved to target the next Moderator, a string of poor rolls saw the Hellcat falling and the remaining Moderators untouched! Not a great start. My last Order saw the Kriza Borac go into Suppressive Fire.

The Bakunin turn saw a Prowler with Spitfire launch a surprise attack on the Kriza Borac, causing a wound in the process before being cut down. A Zero followed up and attack from another direction, but was similarly cut down. The Kriza Borac was king!

My counter-attack saw the Kriza Borac stomp forward and start firing upon the Moderators from an extreme distance. After another string of poor rolls, the Kriza Borac took a Critical Hit and fell! My plan was in tatters. The Bakunin Jurisdictional Command mopped up after this, with the last remaining Prowler ambushing the scattered Alguaciles and cutting three of them down.

The fall of the Kriza Borac and the Hellcat to unlucky dice and Critical Hits was frustrating - average dice would have seen a very different game! Nonetheless, I cannot complain too much as Milou played well and the Bakunin force was well-constructed. I enjoyed running the Kriza Borac for the first time, and think he will be making an appearance in future games! The combination of special rules, most importantly the new Full Auto L2, was superb without being game-breaking.


ROUND THREE
Once more, I was drawn against Milou and the Jurisdictional Command of Bakunin. Falling back to old tricks, I had upgraded my force with a few more Specialists and an Intruder with MULTI Sniper Rifle to deal with any Camouflaged troopers and Optical Disruptor-toting Sisters of the Observance. The Hellcat Hacker was a new unit for me, but I thought would fit well with trying to achieve some late-game Classified Objectives. I went for the HMG on the Kriza Borac this time, as I wanted to enjoy the enhanced range, and also save some points.

Milou was running a somewhat different list to last time, with less focus on Camo markers. A full Link Team of Moderators with a Spitfire and Paramedic, Clockmaker, one Camo marker (that would turn out to be a Zero Forward Observer), and a Haris team featuring a Reverend Custodier, one Reverend Healer and Kusanagi herself. Ouch - that's going to be tough to shift.

The board did not suit me - the Intruder had very limited lines of sight, but I had a plan to score both of my Classified Objectives early and then bunker down. My Classified Objectives both involved the High Value Target, and Milou had placed her well out of sight and with the Zero sitting next to her. That would have to be dealt with, and then I could crack on with scoring points.

Taking the initiative, the Kriza Borac strode forward, Discovering the Zero and blowing it away with Heavy Pistol, but suffering a wound in the process. Damn! He moved back, taking a position in cover and going into Suppression Fire. The Zondbot moved up the field, ready to help the Kriza Borac if things got worse.

They did, as Milou attacked with the Sisterhood. A massive firefight developed between the Kriza Borac and Kusanagi, with her taking a wound that was quickly Healed before he was felled, and then finished with another burst of fire. The Haris team advanced, taking fire from the Intruder but again Healing the damage.

Having lost my Lieutenant, the team was in bad shape. Sacrificing Command Tokens I focused on the mission and achieved both of my Classified Objectives with the Hellcat Hacker. The closing moments of the game saw Milou achieve one of her Objectives before the Haris team hunted down a couple of Alguaciles, while the Hellcat Hacker Immobilised the Reverend Custodier and then killed her with his Combi-rifle, before falling to the Reverend Healer's Boarding Shotgun. A nice ending to the game!

Once the smoke cleared it seemed that the Jurisdictional Command of Bakunin had clenched victory, suffering only two casualties and achieving one of their Classified Objectives. The High Rollers had achieved two, and with the bonus from the Baggage Remote scored a good number of points, but the result was a 6 -7 LOSS. A more than fair result in my eyes.

The game had not gone as I had anticipated, with the Kriza Borac really struggling against the Optical Disruptors of the Reverend Sisters. The Intruder was meant to have dealt with them, but was crucially unable to draw Line-of-Sight. Maybe next time I should bring an Intruder with HMG, who could be more manoeuvrable? I also need to work on placement when going into Suppression Fire, as the Kriza Borac was not in a good range band when he was attacked, and suffered for it.

On to Round Four, with the Spec-Ops and 250pts to play with!


ROUND FOUR
The fourth round was drawn against Peter, a veteran local player who had kept on playing when I my hiatus last year and developed into a really respectable player. Something different from his usual vanilla Ariadna and PanOceania, Pete was running the Military Orders for the Escalation League.

Against me he was running a Link Team of three Magister Knights and two Hospitallers, one with an HMG and one Doctor. an Infiltrating Order Sergeant Forward Observer, Black Friar, Total Reaction Remote, Fusilier Lieutenant and the Spec-Ops, a Fusilier with a Hacking Device, Engineer, Doctor and WIP15.

This week I had returned to the Jurisidictional Command of Corregidor as a frenzied weekend of painting had seen the new Wildcat Link Team finally completed, as well as the new Intruder with MULTI Sniper Rifle and X-Visor from Beyond Icestorm - a lovely model, but smaller than expected! My own list was very much a return to form - I knew Peter would be a big challenge and wanted to use my best possible team.

The Knights took the initiative, with the Order Sergeant appearing from his Thermo-Optic Camouflage and advancing, then disabling the Reaktion Zond with a brutal Surprise Shot and Marking the wreckage for an early Classified Objective. It went into Suppressing Fire. The Black Friar similarly moved up, covering a couple of streets with Suppressing Fire and Drop Bears.

The Wildcats launched the counter-attack, gunning down the Order Sergeant and then running a Scan on the Unconscious body with a Hacker. They advanced to a better position, while the Engineer repaired the Reaktion Zond. A round of fire from the newly repaired Zond did not achieve much, as the Black Friar and the Knights with their HMG smashed it apart once more. The Intruder made her entrance, destroying the Total Reaction Remote through the cover of some smoke dropped by the Jaguar.

The Military Orders were down a couple of Orders, and wasted several more in their Second Turn trying to attack the Intruder. Launching all of their Panzerfaust shots achieved nothing, and in turn one of the Magisters was wounded and another driven Unconscious, though the Hospitaller Doctor bought him back into the game. Finally the Hospitaller with HMG gunned down the Intruder. Their advance was significantly slowed by this interruption, and soon enough the Wildcats began their assault.

Shooting down the main street, the Wildts engaged in a massive firefight with the Knights, breaking the Link Team and gunning down or wounding several of them. The Wildcats spread out, and in the Knights' last turn they faced a brutal lack of options. First the Black Friar was hit, and then the last Knights were shredded by multiple, overlapping ARO shots.

On the Nomad's final turn the lone Hospitaller Doctor was surrounded and brutalised, while the Wildcats achieved the second Objective and Sabotaged their target piece of scenery. Losing only a handful of models, the Nomads had scored a solid win. 10 - 3 VICTORY.


FINAL STANDINGS
This solid win would sit me in good stead for the last round of the campaign, but alas there would be no final round - a string of illnesses, holidays and other Real Life events got in the way, and in the end my opponent and I decided to call it a Draw just to get the Escalation League finished as the other players were waiting for the results.

So the final standings! We fell down to seven players at the end as three players had dropped out over the weeks, and each score was also supplemented by a painting score - one point for each new model painted each Round after the first or two points for using  full painted team with no new models. I had always run a full painted team and added nine new models over the course of the League, giving me some nice bonus points that saw me sitting pretty at the top! Marvellous.

Credit to all of my opponents, especially Milou who was pretty new to Bakunin and managed to carve her way through the League to second place!
Thanks for reading,