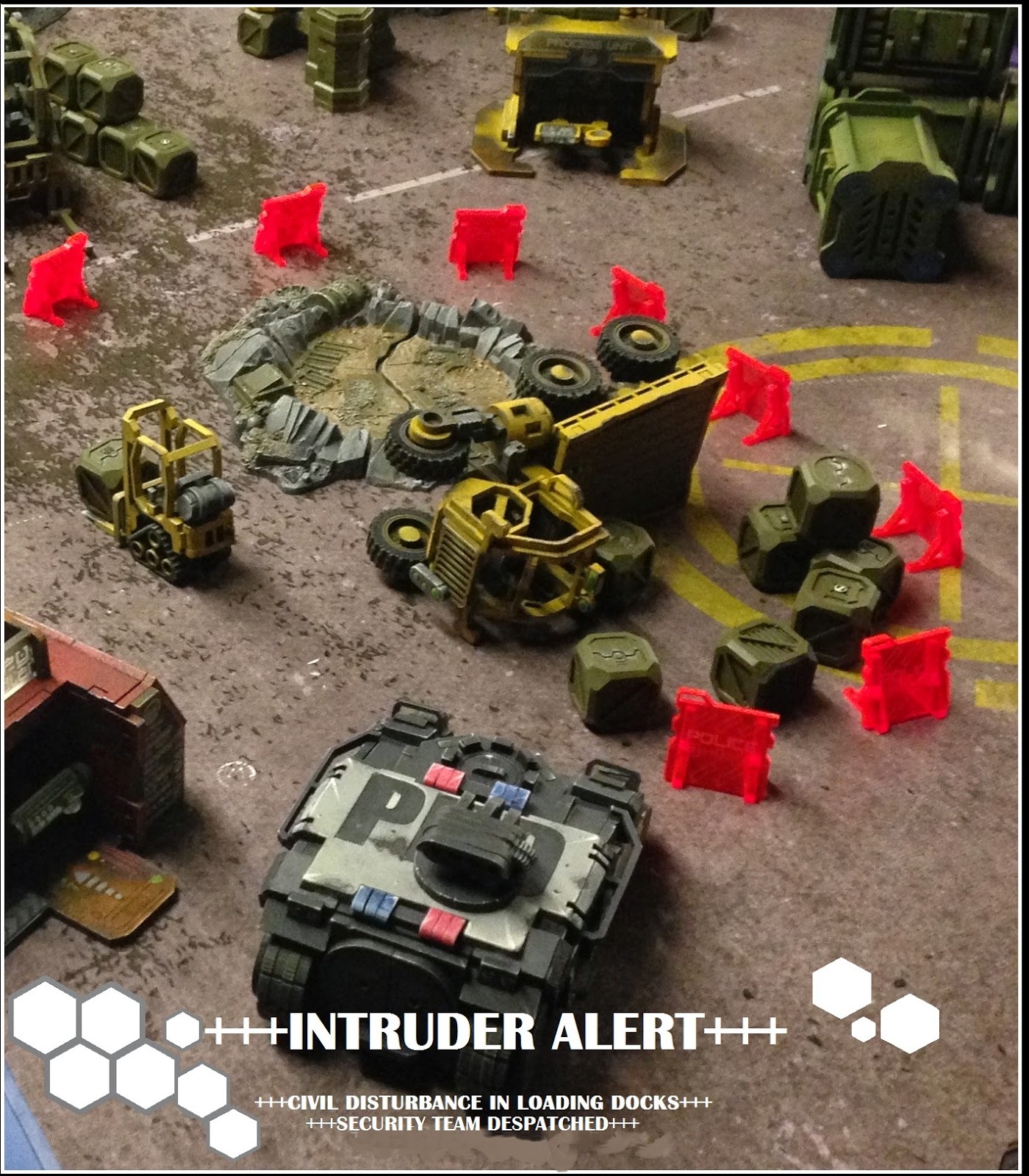 PREPARATION AND THE TOURNAMENT

The last SCTS Tournament of the year and of this Edition of Infinity was announced back in mid-November, and I was well up for it. Infinity has got me well and truly in it's grasp, and I wanted to play as many different people as possible. The previous tournaments had been a blast, especially considering my good results, and this time, I volunteered to supply two tables to play on. This would be a great opportunity to show off my terrain-painting skills, and create something that looked cohesive and told a story.

The following four weeks were a frenzy of painting and building terrain. My work rota began to be organised around giving me the maximum amount of painting time, and though my colleagues did not help by getting sick and needing me to cover them, I managed to get almost everything done to a standard that was acceptable on time,  The (current) results of this great project can be seen below, but rest assured it is not finished yet!

My thanks to Winner Dave for his invaluable help getting those last pieces airbrushed - I needed that little boost and the Bar looks especially fantastic. I look forward to finishing it off with details and graffiti, and will be posting more of Dave's excellent work soon enough.

The time spent on the terrain did impact my painting for both Infinity and Dystopian Wars, as you may have noticed by my slightly reduced posting in late November and early December. It also impacted my gaming time, and I only managed one true practice game. On the plus side, I did manage to get the second Gecko finished as I was thinking about using him in the tournament, but in the end he did not come out play. Some more pictures of that particular model will follow later in the week.

THE TEAM
As stated above, preparation for this tournament was not up to the usual standard, with only one practice game and most of my hobby time spent painting terrain. As such, I pulled my list from the previous tournament, and below is my (now outdated) thinking behind the list.

A smattering of Specialists and heavy firepower was strewn throughout the list, the staple Hellcat with HMG and Reaktion Zond, the Wildcat Link Team, Stempler Zond and Tomcat would all feature, as well as the Intruder with HMG who had not really proven himself hugely useful, but was a consummate deterrent.The list featured five Specialists, which many players would consider to be far too few. It did however, include three HMGs and a Link Team with Spitfire, so I was confident I could make up for any shortcomings with sheer firepower. This *flawless* tactic has won me as many games as it has lost... would it work out this time?The tournament allowed two lists, but I only really planned to use this one and in the end ran the same list three times.

Part of me thought running the same list would be a good idea - I was familiar with it and had done well before, but in hindsight, running an old list and not preparing well did not pay off - as you shall see...

MY TABLES
As mentioned above, I submitted two tables to the tournament. Here are some pictures!

The companies used in the construction of these tables are as follows - but please let me know if I have missed anyone out! More detailed posts on each company and their strengths and weaknesses will follow in the coming weeks.

GAME ONE - Supplies
Facing the manager of the store and an old foe from my first Infinity tournament, I knew this game would be a tough one. Running the Shock Army of Acontecimento, Karl's list featured a Link Team of Acontecimento Regulars with two Spitfires and three Paramedics, three Bagh-Mari (one with an HMG), Bulleteer with Spitfire, Peacemaker with Auxbot, Sierra Dronbot (a Total Reaction Remote), a Trauma-Doc and a Machinist with Palbot - this was a brutal list, and one I was unprepared to deal with.

Karl's rolls in the opening salvo crippled my team, as the Bagh-Mari brought down the Reaktion Zond and the Intruder, and the Peacemaker ruined the Link Team with the Heavy Flamethrower-equipped Auxbot. Rolling four Critical hits in his first five Orders, my team was ruined and it was all I could do to bring down the Sierra and the Bulleteer in my own turn. Turn Two saw me flounder while Karl secured the three Objectives, and though there were some tense moments as the Tomcat and the Hellcat came in to (attempt to) save the day, they too were brought down by Karl's excellent dice-rolling and overlapping fields of fire.

I was in Retreat on Turn Three, and made a play to deny Karl at least one of the Objectives and score my own Classified Objective (Telemetry). This did not work, and the game ended a LOSS of EIGHT - ZERO.

Karl was a gracious opponent and always a good laugh to talk to, but my list was somewhat lacking against his bulldozer of a force, and some great deployment and rolling on his part tore me to bits.

GAME TWO - Seize the Antennae
For the second game, I faced a gentleman named Sean, who ran the Haqqislam Sectorial Qapu Khalqi. Funnily enough, I had played Sean the week before in a practice game, using a similar scenario and identical rosters. A rematch of sorts! Last time it had ended FIVE-ONE to me - would we have a repeat?

Focusing on his Link Team in the opening turn, I used my Wildcats to sneak through the alleys and bring down one of the KTS mercenaries as they advanced on the three Objectives. I then sacrificed the Hellcat to bring down the Janissary and the Tomcat wounded the Djanbazan with HMG, but not before Sean had killed the Intruder and destroyed my Reaktion Remote with their heavy weaponry. The Wildcats poured fire into the KTS team and killed most of them, though the Doctor did his best to bring some of them back into consciousness before losing them once more. The Djanbazan Sniper was killed by the Spitfire-armed Wildcat, and they were left unopposed to run down the centre of the board, activate each Antenna and score all three Objectives. Final result was a WIN for me, with a score of NINE-ONE.

Sean is always a pleasure to play and it was a really fun game. It may have sounded like a white-wash but it felt a lot closer at the time - especially when my Intruder, Hellcat and Reaktion Zond were all dealt with in quick succession. Sean did make a crucial mistake in thinking we had one more turn to play, which probably influenced his very conservative and defensive play in Turn Three, so perhaps next time will be closer!

GAME THREE - Quadrant Control
The third game and my least favourite scenario beckoned, against one of the best players in the country! Oh dear. My opponent James was one of the top four players in the UK according to the ITS Rankings, and had a brutally efficient ALEPH force. Two Thorakitai Forward Observers and two Myrmidon Enotomarchos fireteams featuring celebrities like Machaon, Phoenix, Ajax and Eudoros; a brutal selection of heavy firepower, Optical Disruptors and No Wound Incapacitation.

I took the first turn and was effective in taking down one of the Thorakites and Phoenix, but after that it was all downhill. The Hellcat was wasted, brought on to kill a Thorakites but then killed in turn, the Tomcat spent the game playing hide-and-seek with the second Thorakites to try and Sabotage a building in James' deployment zone (unsuccessfully) and the Wildcat Link Team was picked off one by one by Eudoros and his Mk.12 following some poor positioning on my part.

Objective wise, I was not aggressive enough in the first two turns as my team was stymied by James's excellent positioning and No Wound Incapacitation. Forced to spend twice as many Orders and double my risks when attacking his fireteams left me on the wrong end of some Critical Hits, and with the Link Team, the Hellcat and the Intruder lost, the rest of the team did not have enough firepower to deal with two fireteams of multi-wound, ODD-equipped monstrosities.

In ended in a LOSS with a score of SEVEN-ONE to my opponent. James was a gracious opponent, especially given some differing rules interpretations and poor memory on my part. This game was a severe learning experience, and a stern warning that my list and my playstyle was getting stale and needed some fresh units. Tired and ill, I had made some foolish moves in the opening turn, and lost the initiative.

Time to hit the painting table and get that Iguana finished! Good thing N3 is only around the corner...
OTHER TABLES


RESULTS
Seventh out of twelve, disappointing not to break into the top half, but given my performance and the quality of some of the players there, I don't think I deserve anything better. Next time!
CONCLUSIONS AND LEARNING POINTS


NEW TERRAIN FROM WARMILL
The nice chaps from Warmill lent some of their new, unreleased terrain to the store for the games, and it seems rude not to leak some pictures out! I did not play on these buildings, but they looks interesting and perfectly usable for Infinity. It is nice to see them branch into some terrain with height to it!