AAR - The Black Wolf Mercenaries versus The Prussian Empire

"...in the wake of the bloody engagement with the Federated States of America and the prolonged duel with the Enterprise-class Dreadnought Dortmunder, the Markgraf was badly damaged and exposed. Struggling through the bitter waters of the North Sea, the remnants of Baron Grunner's Hunter Fleet sought protection amid the oil fields, hoping to mask the location of the Dreadnought while it was repaired.

Calls for assistance were sent out to Prussian-held ports along the Norwegian and Danish coast, demanding reinforcements to protect the vessel. Encrypted with the latest Prussian ciphers, these messages were nonetheless intercepted and decoded by the brigand mercenaries of the Black Company. Their contacts in the Britannian Admiralty quickly promised them untold riches for the capture or destruction of the rogue Dreadnought, and using their advanced technologies they made all speed for the North Sea oil fields.

Deploying a massive fleet of aerial and naval vessels out of hidden ports on the Scottish coast, the Black Company were not content to destroy the Markgraf but wished it for themselves - much as they had done two years previously, they would capture a Dreadnought and drag it back to their pirate anchorage. Their fleet was unnaturally fast and could reach the target before any Russian or Britannian squadron, but they would not beat the Wolf Pack of renowned Submarine Commander Jurgen Grönemeyer...

Battle would be joined amid the dense Visund Oil Field..." 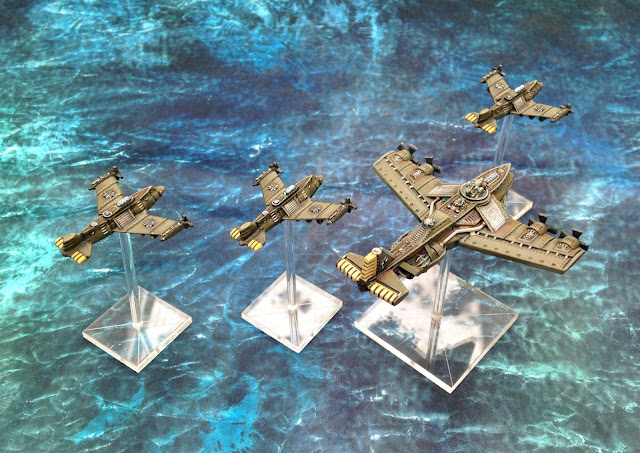 Welcome to another chapter of the Hunt for the Markgraf and the return of the Black Wolf Mercenaries! Long thought smashed at the end of the Greenland Campaign, the Black Company has rebuilt and refitted, and now sail with Britannian coin against the Prussian Empire.

THE SCENARIO
The mission for this week was taken from the Ironclad Campaign system by Spartan Games' forum member Drachenfutter. Thanks for this great resource! I will be using several of the scenarios taken from this pack in the coming weeks for the Hunt for the Markgraf, and really appreciate all the work that has been put into it.

The mission is called King of the Hill, with the Markgraf being the Hill. Both players would have to flood the "neutral focal point" with as many bodies as possible by the end of four turns, and the winner at the end would carry the game. Victory Points would be used if nobody dominated the focal point at the end.
THE FLEETS
The Black Wolf Mercenaries

SMS Kaiserin Elisabeth II - One Elbe-class Fleet Carrier with Elite Crew, accompanied by one wing of five Dive Bombers and one wing of four Fighter Planes
U-113 - One Sturmbringer-class Submarine

Two Squadrons of two Donnerfaust-class Support Cruisers and one Havel-class Light Carrier, each accompanied by one wing of four Fighter Planes

Mike and his Prussians scored 1,532 Victory Points and achieved the Objective by holding the Markgraf with eight Assault Points, while the Black Company only scored 1,435 Victory Points. A close match, but ultimately, it was a VICTORY for the Prussian Empire!

CONCLUSIONS AND LEARNING POINTS
Once again, the power of the Prussian Empire has prevailed and the Markgraf remains in their hands. This game was tight, with huge losses on both sides, but ultimately the power of Tesla weaponry outshone the immense ordnance of the Black Company and left them unable to complete the mission.

Almost all of Mike's squadrons fielded Tesla-weaponry, and it showed when certain squadrons were hit with Speerschleuder harpoons. Devastating Ordnance is one of the best rules in the game, and combines well with the number of dice the Tesla-weaponry can throw out.

So much Tesla-weaponry on the board obviously made for some weird weather conditions and messed with our Generators, as we rolled no less than four Sturginium Flares during the game! This only resulted on one collision, but it was still quite a sight! No Magazine Explosions makes me sad though.

The deployment of two new Specialist Squadrons was important for the Prussian Empire, as the Verstärkung Squadron and the Donner Squadron both proved their worth during the game. The Donner Squadron in particular caused untold damage to the Black Wolf Mercenaries, destroying several vessels and securing the focal point with their crews in the last turn.

The mercenaries did little to counter their power, as the AA of the squadron protected them from rocket fire and they flew too high to be a good target for the ordnance. Mike played well with them, and though I had opportunities to deal with them, other tempting targets took my attention. I think in the future I will need some dedicated interceptors.

The Black Company felt powerful, and caused a LOT of damage when they could get into close range, but ultimately their small squadrons and extortionate Strategic Values hurt them. Perhaps I could do with more cheap squadrons like the Fury-class Frigates and aerial units, as they can bring numbers to the fleet.

The Reaper-class Attack Submarines were occasionally awesome, and mostly okay. I am still not sold on tiny, ordnance-based squadrons like this (I prefer the boarding-based ones like the Turtle, Crocodile and Stingray), but they are a nice addition to the fleet and can chase down things the larger vessels miss.

The dice rolls for both of us were fairly average across the game, though I did have some particularly poor rolls in the final turn that did not help! Overall Mike proved the wisdom of Linking everything, and scored a number of triple critical results that ruined my Submarines. Splitting fire with my Main Turrets on the Nemesis-class Battle Cruisers could have paid off and caused massive damage, but did not work out in the end.

The positioning of the Death Bringer-class Submarines was fairly poor, and they should have been placed further on the flanks. I was foolish to waste them for minimal return, especially the red one in the second turn.

Mike comments the Havel-class Light Carriers are best in the Late Game, and I must agree. Their broadsides are bloody annoying and they are tough, meaning with good positioning they are usually fully operational in the last turns of the game. This is difficult to deal with when the rest of the Prussian fleet takes so much effort to bring down - battered Battle Cruisers and under-strength Frigate squadrons struggle against undamaged Light Carriers.

Overall it was tight game that really kicked in on Turn Three. The scenario gave us something different to think about, and rewarded holding back squadrons with large crew complements. I feel my activation order and positioning let the Black Company down, while Mike played the Prussians to their strengths and punished me for my mistakes.

Next time, we may see the Russian Coalition return to sea, with some Specialist Squadrons of their own!

"In the face of destruction, the Markgraf had been saved from an ignominious fate and the mercenaries of the Black Company sent reeling. The cost had been extortionate - the loss of the Fleet Carrier Kaiserin Elisabeth II was a huge blow for Prussian efforts in the North Sea, while the capture of the U-113 meant the loss of Submarine Commander Grönemeyer, a brilliant hunter and personal friend to Baron Grunner.

The net was closing in on the Markgraf as more and more Russian squadrons poured into the North Sea, while the Britannians began mustering their own Battle Groups alongside mercenaries and lesser fleets from their colonial allies. For all his victories, the Baron was running out of ships, and support from the Prussian Naval Command was rapidly drawing thin.

Grunner's answer, of course, was to find some allies of his own..."