"The Markgraf, once the pride of the Prussian Navy, their greatest prize and invaluable asset in the North Sea theatre, had become a great weight around the neck of Baron Karl-Ehrhart Grunner. Following his early victories, he was now being hunted by some of the most powerful Naval Powers in the world. His political support was drawing thin, and his demands for aid met stony silence.


With reinforcement lacking and his options running out, Grunner embarked on a highly risky strategy - his fleet would lure their pursuers to the Norwegian coastline and seek to double-back and outflank them amid the rocks. At the same time, they would draw the attention of the fiercely territorial Teutonic Order of Prussian-Scandinavia. Enraged by the presence of foreign interlopers in their waters, it was hoped the Teutonic Order would deploy their infamous Battle Robots to intercede on their behalf.


The plan was, at least initially, a complete success. Seneschal Gerhard mobilised his Baronial Court as soon as the Russian fleet appeared on the horizon. At Midbrødøya, the immense Battle Robots clambered down the rocks and into the ocean, led by their master aboard the Hochmeister-class Dreadnought-Robot Carolus Rex.

...but Grunner had underestimated the size of the Russian fleet. A truly titanic clash would occur as the Teutonic Order strode into battle with a huge fleet of enemy warships. By days end, both sides would be reeling from the cost of Grunner's arrogance..." 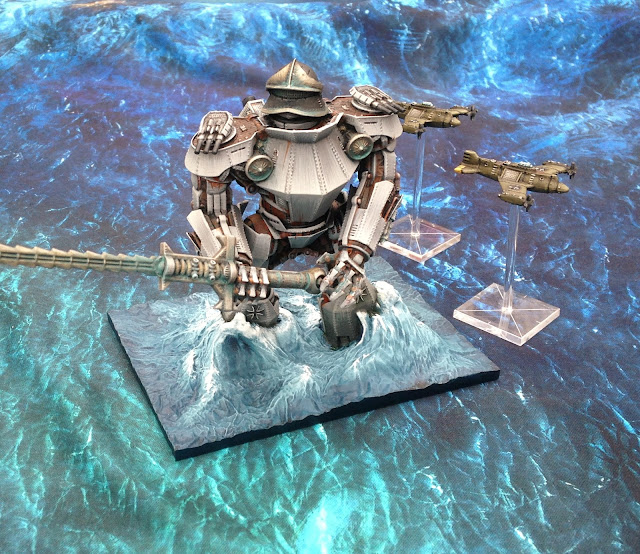 Welcome to another Battle Report from Full Spectrum Dominance, and another entry in the Hunt for the Markgraf. This week, the Russian Coalition have caught up with the rogue Dreadnought and deployed their own massive fleet of capital ships, but have they been lured into a trap? Why have those islands started to move?

Having recently finished the Hochmeister-class Dreadnought-Robot, I thought it was time for the Teutonic Order of Prussian-Scandinavia to return to the battlefield!

The mission was simple - who would score the most Victory Points in four turns. The main difference would be deployment, as the fleets would be set up diagonally across a board, with the leading elements of the Teutonic Order only 24" away from the Russian Coalition to represent their surprise attack.

The Prussian fleet would not be allowed to take an Elbe-class Fleet Carrier after the loss of the Kaiserin Elisabeth II last game, and would be forced to run a Donner Squadron (the survivors of last round) in addition to the Hochmeister-class Dreadnought-Robot (because I want to see it in action). The total fleet allowance was 1,850pts.

The Donner Squadron were set up in support of the Markgraf, which was only a terrain piece today, while the Teutonic Order were set up on the island chain. The rest of the Prussian fleet would launch their attack from behind the islands.

The Russian fleet would be running my latest additions - all the Specialist Squadrons, two Battleships and a Dreadnought. A LOT of firepower! The rest of the 1,850pts was filled out with Destroyers, Corvettes, Strike Submarines and a Fleet Carrier, all set up along one corner of the board.
THE FLEETS
The Russian Coalition
Poltava - Moskva-class Dreadnought with Mimic Generator
Sviatoi Velikomuchenik Isidor - Borodino-class Battleship with Mimic Generator
Grahzdanin - Borodino-class Battleship with Mimic Generator
Kostroma-class Fleet Carrier with Glacier Generator, accompanied by one wing of five Fighter Planes and one wing of four Fighter Planes

One Squadron of three Donnerfaust-class Support Cruisers accompanied by one Havel-class Light Carrier, carrying one wing of four Fighter Planes

The Hochmeister-class Dreadnought Robot is a lot of fun. This scenario might have been a little too much narrative and not a great place to test it, but I honestly did try to kill it! The dice were not helpful on that front, especially Mike gaining the initiative on Turn Three and promptly smashing the Moskva-class Dreadnought. It was amazing how resilient it was against the turrets of the Dreadnought and Battleship - every time I was just shy of causing a critical hit. Eventually it fell to a Sturginium Flare, having lost nine HP to a slow grind from turret and broadside fire. An impressive end for this incredible war machine.

The Speerschleuder Turrets and sword option give it a lot of lightning power, perhaps worth losing the additional speed over. 7" movement is still on par with the Blucher-class Dreadnought, and having a potential eighteen dice at RB3 with Devastating Ordnance is nasty.

Robots as a whole are a lot of fun, and the Teutonic Order achieved some significant damage today. Crushing Impact and Hull Breaker is a powerful combination, especially as Robot attacks ignore Armour MARs like Ablative Armour. Against the relatively low DR values of the Borodino-class Battleship, even a Metzger will be causing a lot of damage - let alone the Hochmeister!

Their speed is a defining factor, and this scenario did give them a slight head start by having them only 24" away at the start. It did not help that I completely forgot about their Mimic Generators and placing ice to block their path - that would have helped...

As far as the other squadrons and ship fare, the Specialist Squadrons were a nice addition to the fleet. The Rogatina Squadron did well to destroy the Sturmbringer, while the Shashka Squadron had an enviable amount of firepower to pour into the Metzger. They just need to stay in RB2! In the end their got too close and were punished for it. The Pevek Cruiser Squadron was nothing special - not really worth the additional points over a squadron of pure Cruisers.

Chany-class Strike Submarines remain awesome. They have so many MARs its frankly embarrassing. I don't think I'll be running two squadrons unless I really want to win in the future.

The Donner Squadron for the Prussians remains a game changer - in a lightning-heavy fleet like Mike prefers to run, they shine. I seriously need to invest in some interceptors if I want to deal with them in the future. Perhaps the Polish-Lithuanian Commonwealth need some paint!

Three Donnerfaust-class Support Cruisers with a Havel-class Light Carrier is a nasty amount of Tesla-weaponry, and they were, as usual, very solid in the late game. Redoubtable makes them fearsome even after taking several major blows.

Overall a very fun game! Incredibly bloody, as usual, with three Magazine Explosions and a very important Sturginium Flare. I played... shoddily with the Russians, getting distracted by the Battle Robots and then rolling poorly to allow them to reach base contact several times.

It was always going to be a bit of a silly game running these illegal lists with weird deployment rules, but I had a vision for the ongoing narrative of the campaign, and I hope it paid off!

THE NARRATIVE
"Once more, the Markgraf had escaped the Russian Coalition and the Prussian Navy could claim another victory. The cost, however, had been staggering - Seneschal Gerhard and his entire Baronial Court had been lost in the waters of Midbrødøya, a Sturmbringer-class Submarine had been completely destroyed and the Wolf Pack reduced to a handful of ships.

The loss of four Battle Robots in one engagement was catastrophic for the entire Prussian war effort, and now Grunner had drawn the Teutonic Order into another front - his war. They would fight, there was no doubt, but they would not be forgiving to the man who had cost them the Carolus Rex..

Serious questions were being asked in Berlin about Baron Grunner and his prized Dreadnought, and the escalation of violence he had provoked in the North Sea theatre. Would they support his endeavour, or abandon him to the Russians? Regardless of their decision, Grunner would find his own way..."