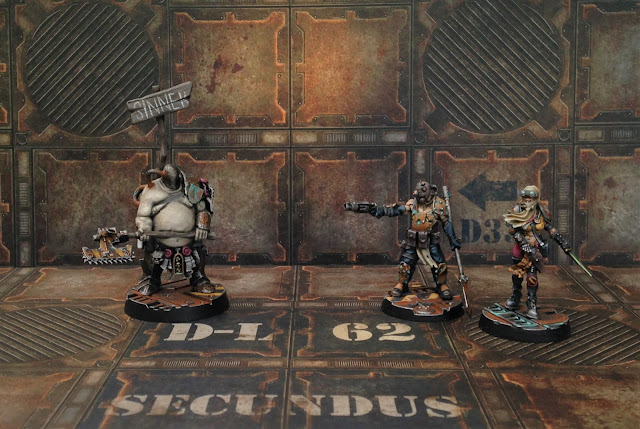 Another special conversion for my Necromunda collection, this Lord of Nurgle is an old model I have had for some time, rebased and touched up for my Venator gang. The original model was going to be used for Inquisimunda or something similar, which is why it features the Inquisitorial =I= on the armour, but now I think it will feature in my Bounty Hunter gang.

In my head, this conversion was always inspired by the description of the "Warblind" from Dan Abnett's book Pariah. The Warblind were veterans of an ancient war, kept alive by their combat implants and bionics but driven insane by the horrors they had witnessed. Tolerated and left to fend for themselves in abandoned parts of the city, the protagonist of the novel has a couple of experiences with a particular Warblind, and there is a great twist at the end I won't reveal.

I took much from that as influence for this model, as well as the host of other conversions people have done with this model. My own conversion is relatively light, and adds a penitent touch with the back banner and the purity seals. A holstered pistol shows this is not a mindless killing machine, but still a ruined, battle-ravaged soul who will never be able to return to civil society.