ALL NECROMUNDA, ALL THE TIME 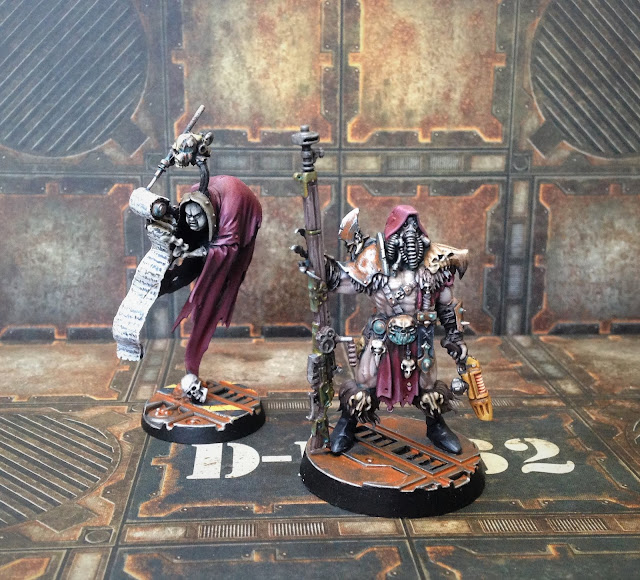 Another addition for my Necromunda collection, this week sees my custom Bounty Hunter "The Reclaimator" added to the field, along with his macabre familiar. The original model is the Drakoath Chieftain who first appeared in Warhammer Quest: Silver Tower, and the inspiration came from a similar conversion I first saw on Facebook. This model was a long time coming - I think the conversion was done some time in January but I was distracted painting other things and never had the guts to get on with it - I was nervous about messing it up!

This ended a few weeks ago, as I reached capacity and finished painting all the Goliath gangers I own, then bashed out a few Bounty Hunters and Hired Scum. With no more excuses, I got on with it, and despite my trepidation enjoyed painting this model a lot more than I expected! Painting plastic is a joy compared to resin sometimes, and added to that I had complete creative control - my other Scum were often based off the Forgeworld Studio paint schemes (or at least could be compared to them) and this added pressure.

I concentrated on making the model feel old and battered, with cloth highlighted almost to pure grey, and no hugely bright colours aside from the glowing plasma pistol. I wanted the scheme to feel washed out, relying on a few key points on the model to pop - the aforementioned gun, the bones, the verdigris on the metal.

Once I was happy with him, I came across an old conversion I had made some years ago, when Inquisimunda (or Inq28 as it is now) was something I was looking to get into. A hideous floating familiar converted from the plastic Wraith model was something I knew I had to refurbish and get onto the Necromunda table, and this seemed like a good excuse to give the Reclaimator a friend. The cloth was quickly painted in the same washed out red as the Bounty Hunter, and it was given a Necromunda base. Now I have the perfect counts-as Servo-Skull for my Bounty Hunter, a tallyman who keeps records for the Techpriest-gone-rogue and floats about freaking people out.

I think both models work well as a pair, but they're also strong conversions and paintjobs that can stand alone. Here's some more pictures and flavour text - all credit to Dark Heresy for the initial descriptions of a Reclaimator.