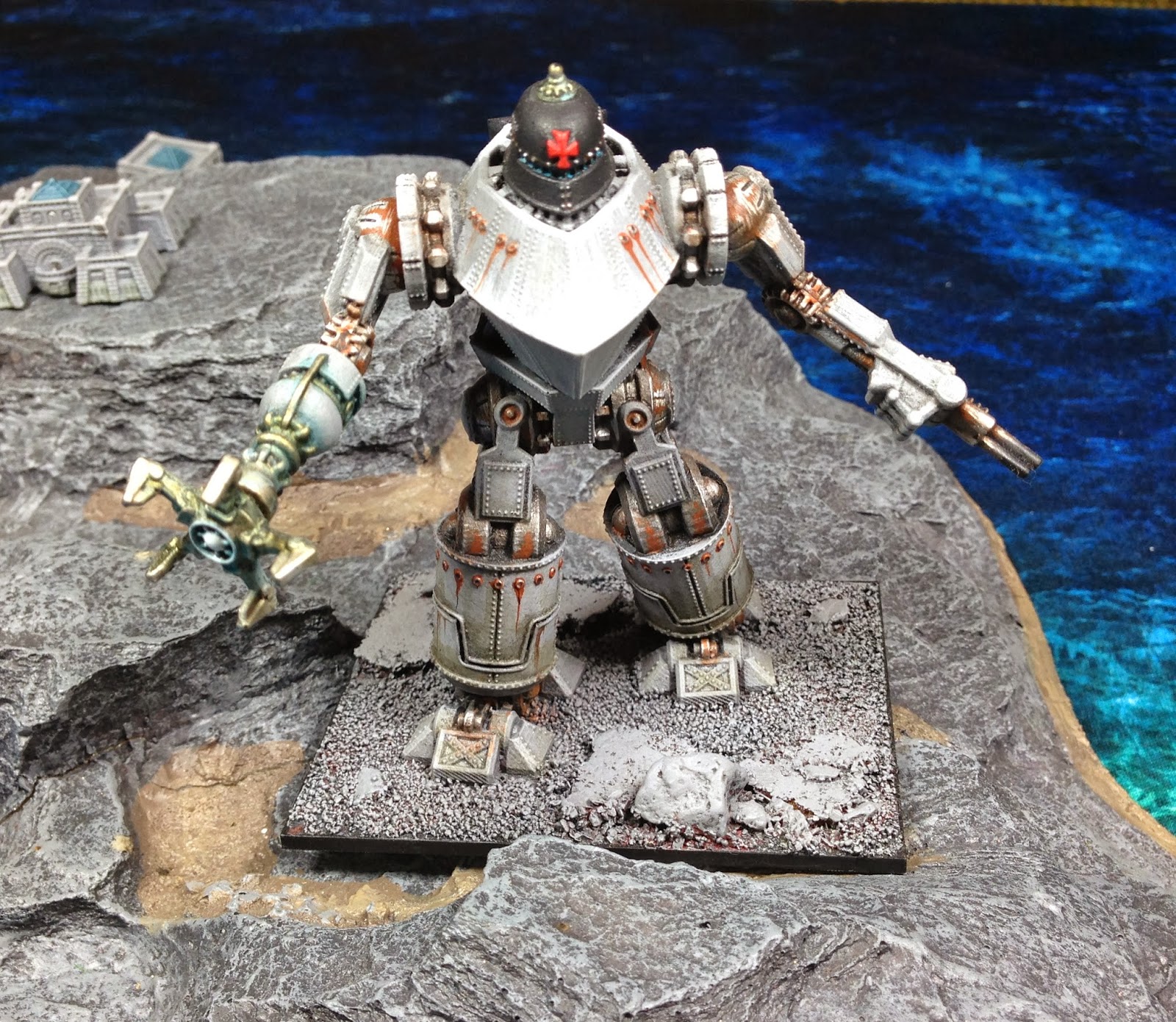 I like to push this button when the Metzger enters the game. 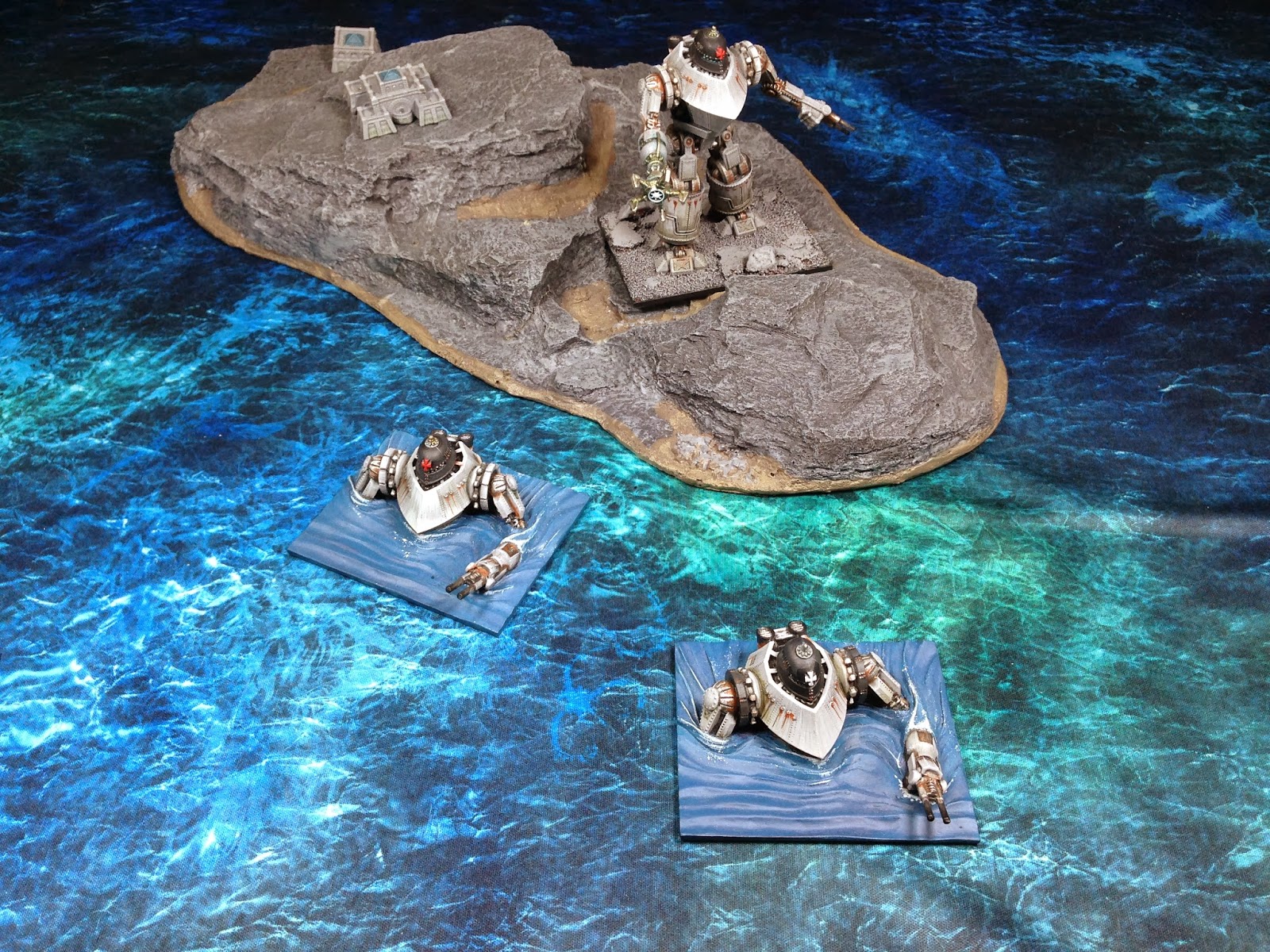 PAINTING
I decided the camouflage scheme of my Prussian Navy would not look great on the Metzger and stuck with a scheme very similar to the Spartan studio example - simple greys and metallics. I opted for a streaked effect on the grey to show it was well-worn, with a green wash around the lower areas (especially the legs of the standing Metzger) to show it had been wading through the sea. 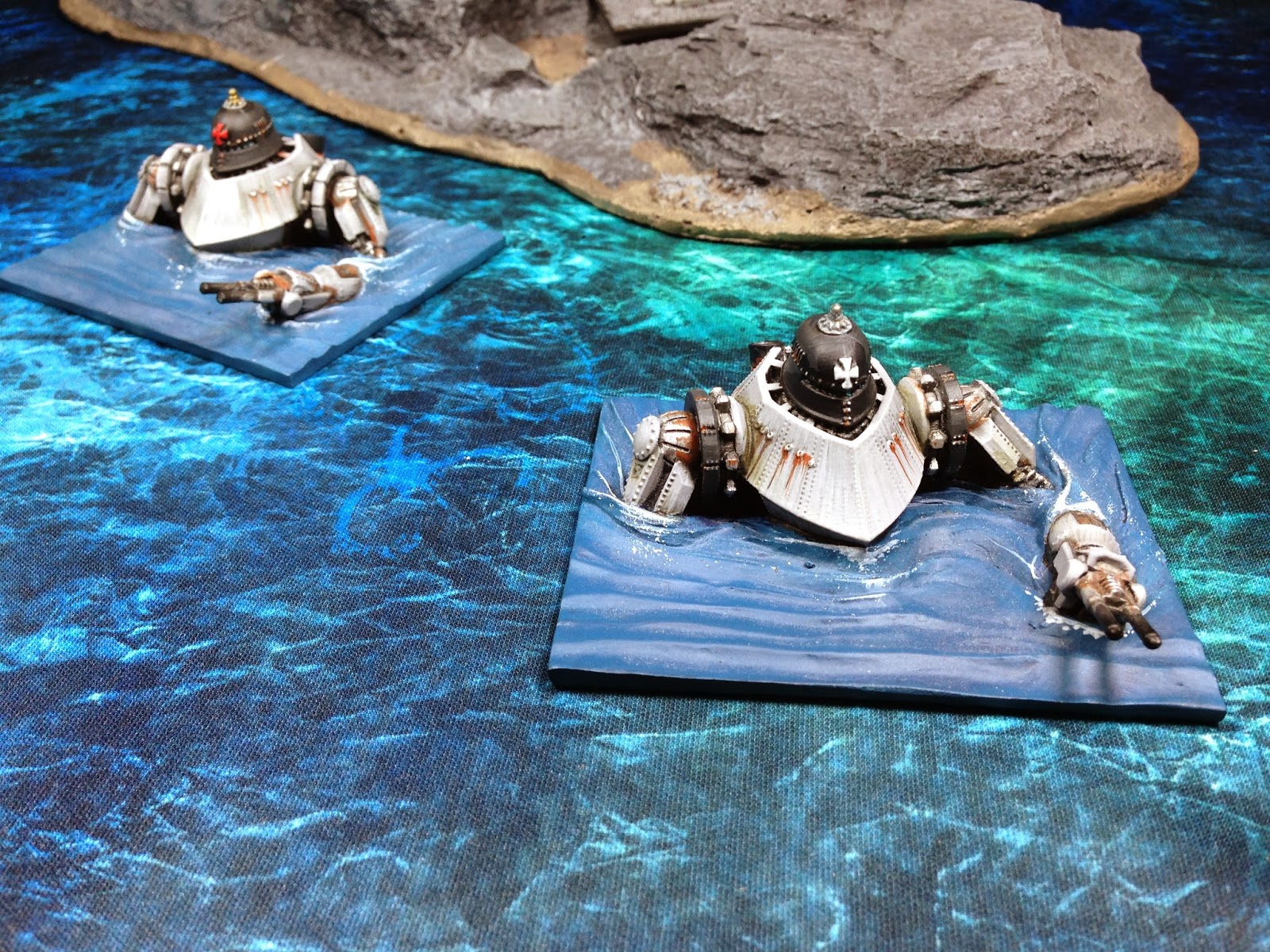 The metallics were weathered a great deal, with rust leaking out of every joint and porthole. The gun barrels are blackened while the Tesla Coil is done in the usual style with Sturginium leaking out and staining the weapon housing. Unfortunately this arm is only visible on the land-based robot, but the pattern continues on the coil-like appendage on top of the helmet. The Metzger is not a heavily detailed model, simple and effective in its brutality. 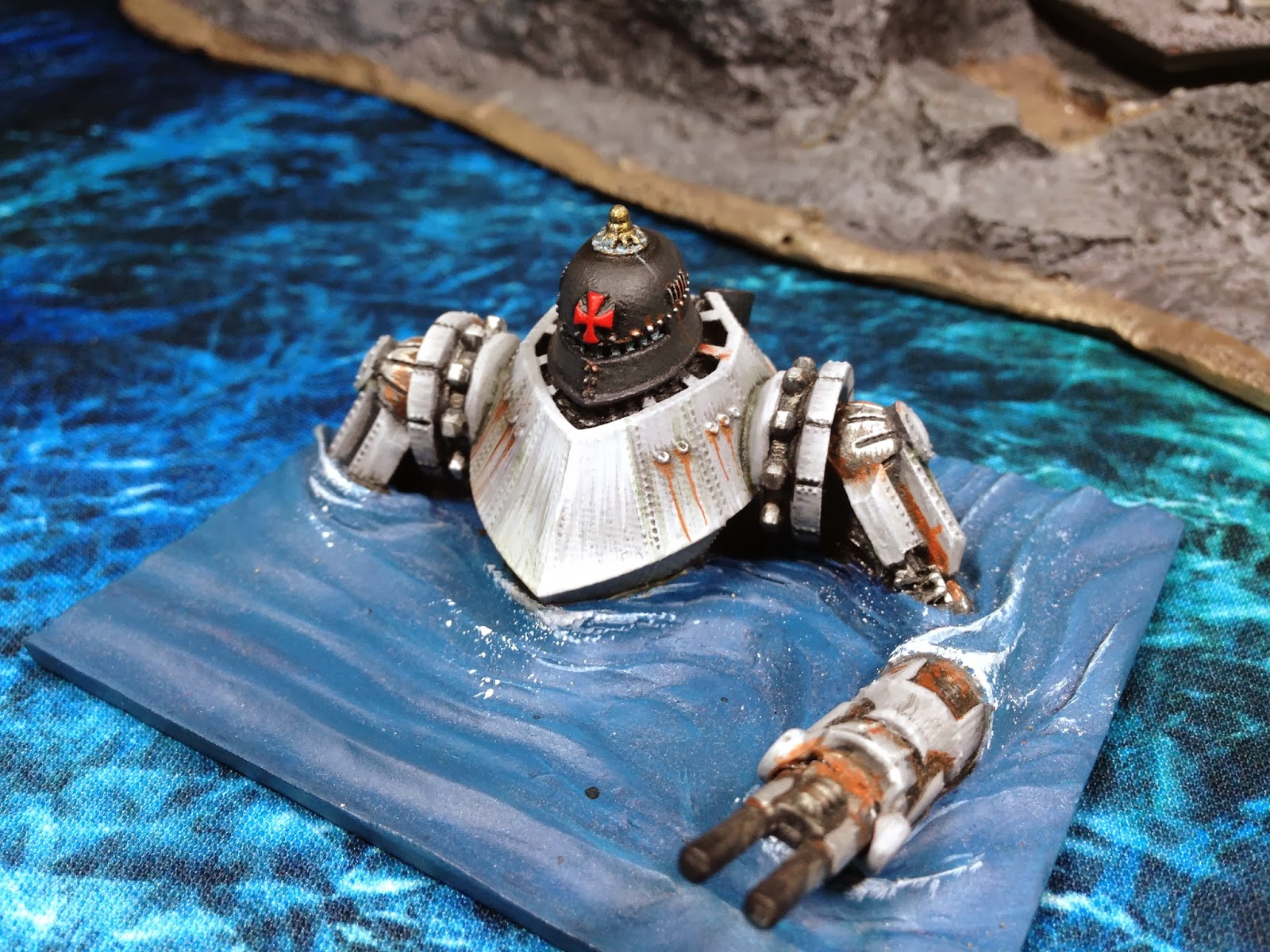 IN THE GAME
The old Metzger was too slow in the water, and was disregarded by Prussian players for a long time. The Ausf. B brings more Tesla, more speed, and more violence to the Prussian arsenal. It's a big model, even up to its chest in water, and a pair of them dominate any area of the board they sit in.

As they move forward, the Speerschleuder and Tesla Coil of a Metzger can throw out a linked 13AD in RB1, 11 at RB2 and 7 in RB3. Two of those, with Redoubtable and sitting on a Robot with battleship defences and Rugged Construction - yes please! These guns also have fantastic arcs, being mounted on the arms of the Robot. A personal favourite is for the Metzger to shoot either side of its target vessel before engaging in a Boarding Action - roll well and you could destroy three ships in one Activation, a whole squadron!

Once in a Boarding Assault, the Metzger shows its power with 8AP and Ferocious, which should shred nearly anything it touches. Thanks to being a Robot, none of those AP will be lost to AA fire (unless you get really, really unlucky) and should quickly render the enemy Derelict. Only the infamous Ika of the Blazing Sun and the horrible FSA John Henrys can compete with this kind of power. Again, as a pair, nothing I can think of will put up much of a fight!

The Metzger suffers in prolonged combats, as it loses AP as fast as any other ship. For this reason, I hesitate to use it against undamaged Large or Massive vessels, waiting until they have been softened by Corvette or Frigate crews first. Mediums, however, get chewed up! Be aware of your positioning when attacking another vessel - as the Metzger can only render a ship Derelict sometimes it can find itself trapped behind its hapless victim and take the rest of the game trying to extract itself.


WHAT DOES IT BRING TO THE TABLE?
THE GOOD
THE BAD
WILDCARD
I like to run these as a pair instead of a Dreadnought, and find this squadron always causes nightmares for my opponent. Solid AD on the Tesla weaponry, and phenomenal in Boarding, these models need to be dealt with quickly or avoided as much as possible - which can be difficult when they sit in the middle of your fleet and rush forward up to 9" per turn.

Taken alone, they are an intimidating threat and will be a nice addition to the fleet. A pair will dominate your Prussian force and your tactics should revolve around them heavily - a 250pt investment needs to be used wisely.

Regardless of their strength in the game, the Metzger is an iconic unit for the Dystopian world and should be fielded as much as possible! Great models to build and paint, there Multi-Purpose nature is one of the attractions of Dystopian Wars, and is always fun to pull off.