FIRST IMPRESSIONS OF GAMING WITH THE HONOURABLE ECLIPSE COMPANY 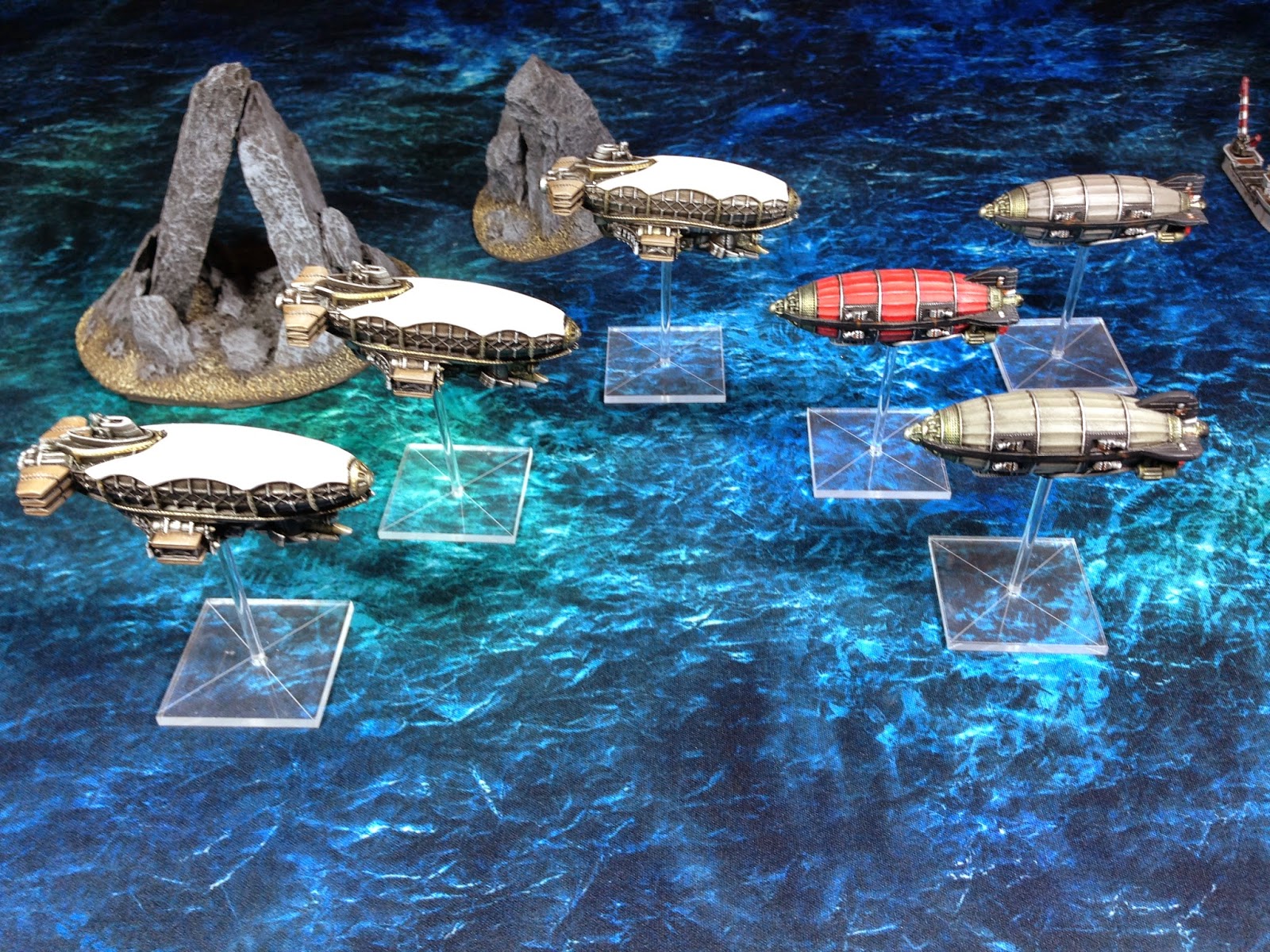 The Eclipse Company have made their entrance to the Dystopian world and fought their first Battle Report, but how do they feel as a faction? In this article, I look a bit closer at some of their statistics and give my opinion on the new Mercenaries.
The Eclipse Company offer a new style of play for many - a mixture of Aerial forces with Fortifications, supplemented with a great deal of tiny ships and tokens. Their ships are fast, with strong anti-aircraft firepower, powerful bomb racks and some dangerous turrets. They are also expensive, limited in number, and reliant upon Shields for protection, as their defensive statistics tend toward the average.

In the (admittedly few) games I have played with or against the Eclipse Company, they have shown the power of distraction and misdirection, using their Fortifications to take most of the punishment while the fleet manoeuvres into place. Come the second turn, the Company descends from the clouds and opens fire, crippling the enemy fleet with Sheaf Fire, huge AA values and strong turrets. By the third turn, the bombing runs can begin and the Assault Craft can emerge from hiding to Prize some damaged vessels.

A potent fleet! The Eclipse Company play fast and loose, not overwhelming the enemy with a dozen special rules but biding their time until everything is ready and then destroying everything in a series of brutal activations. 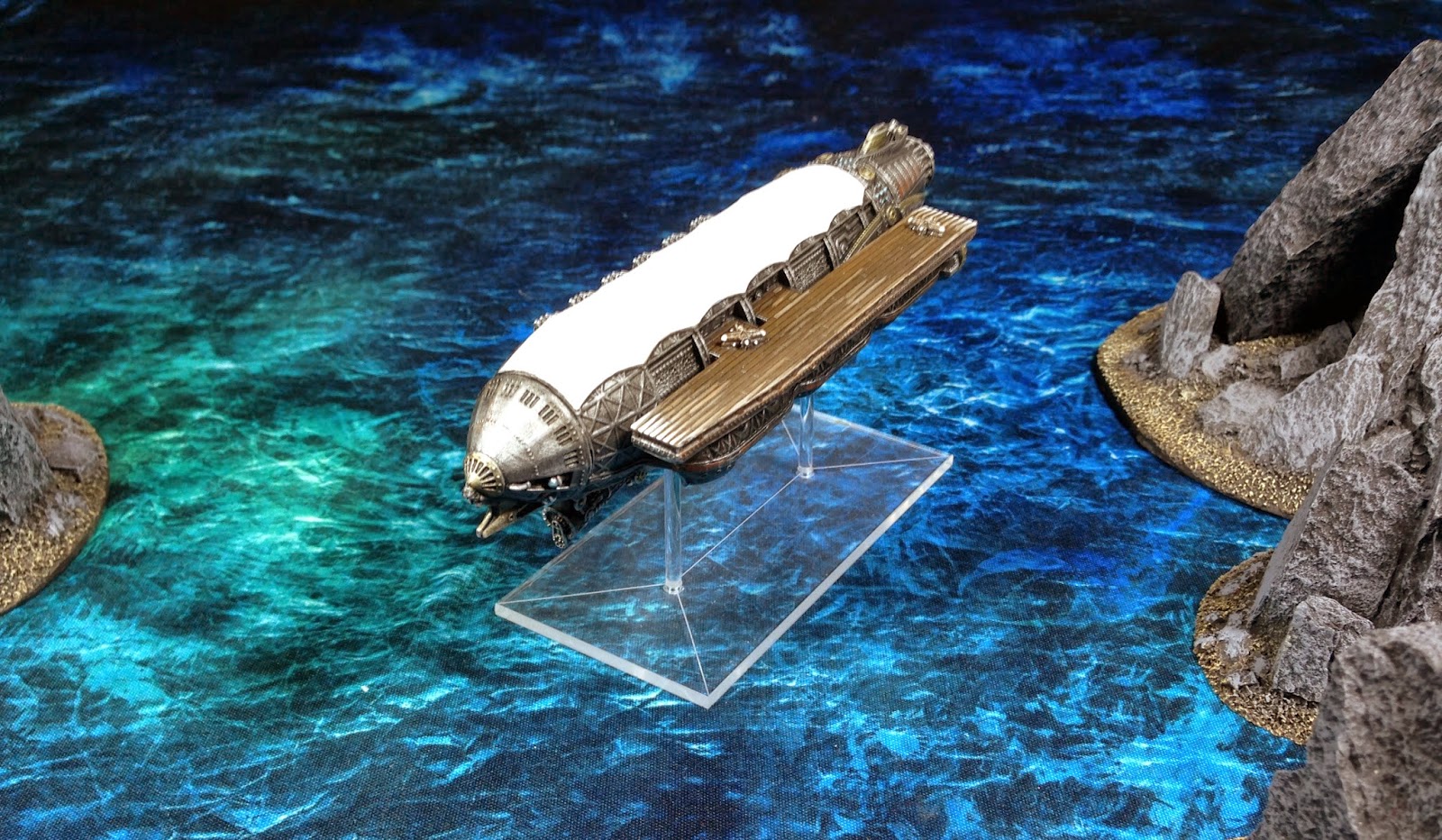 The only large vessel available to the Eclipse Company (the Tartarus being a Fortification), the Elysium feels like a must-take, but this is not a front-line Battleship. The Tiny Flyer complement, the Guardian Generator and Combat Co-ordinator: Dash & Elan make this vessel a top-class support ship, lending aid to the rest of the fleet and making sure all the different elements of the Company work to their full potential. The Earth Shaker Cannon maintains this role, offering powerful Sheaf Fire with Redoubtable in RB2 and 3, and this is ideally where the ship should stay.

There is a contradiction in the Elysium - it has one of the powerful cannons in the entire fleet, yet (proportionally, and when compared to other Large vessels and Fleet Carriers) is also one of the most vulnerable ships in terms of defensive statistics. Even with powerful MARs like Combat Co-ordinator and the Guardian Generator that need to be close to the front line to work effectively, the Elysium is too expensive and not durable enough to maintain an aggressive role. DR6 and CR8, combined with only 8 Hit Points make the Elysium an easy target for concentrated enemy firepower, as well as a fairly low crew complement of 6. Against fleets with a strong Aerial presence or Boarding potential, Escorts in the form of Hades-class Interceptors are a wise investment.

The Elysium works best hanging at the back of the fleet, lending protection and Combat Co-ordinator to the ships around it without being exposed to too much return fire. The sheer power of the Earth Shaker Cannon will attract a great deal of attention, so protect it as much as you can!

I would always run an Elysium - it brings so much to the Eclipse Company and to other Nations as a Mercenary for an affordable cost in points (perhaps to make up for the low defences). Once you've fired the Earth Shaker Cannon into a squadron of Mediums and caused three Critical Hits, you'll wonder how you ever did without Sheaf Fire. 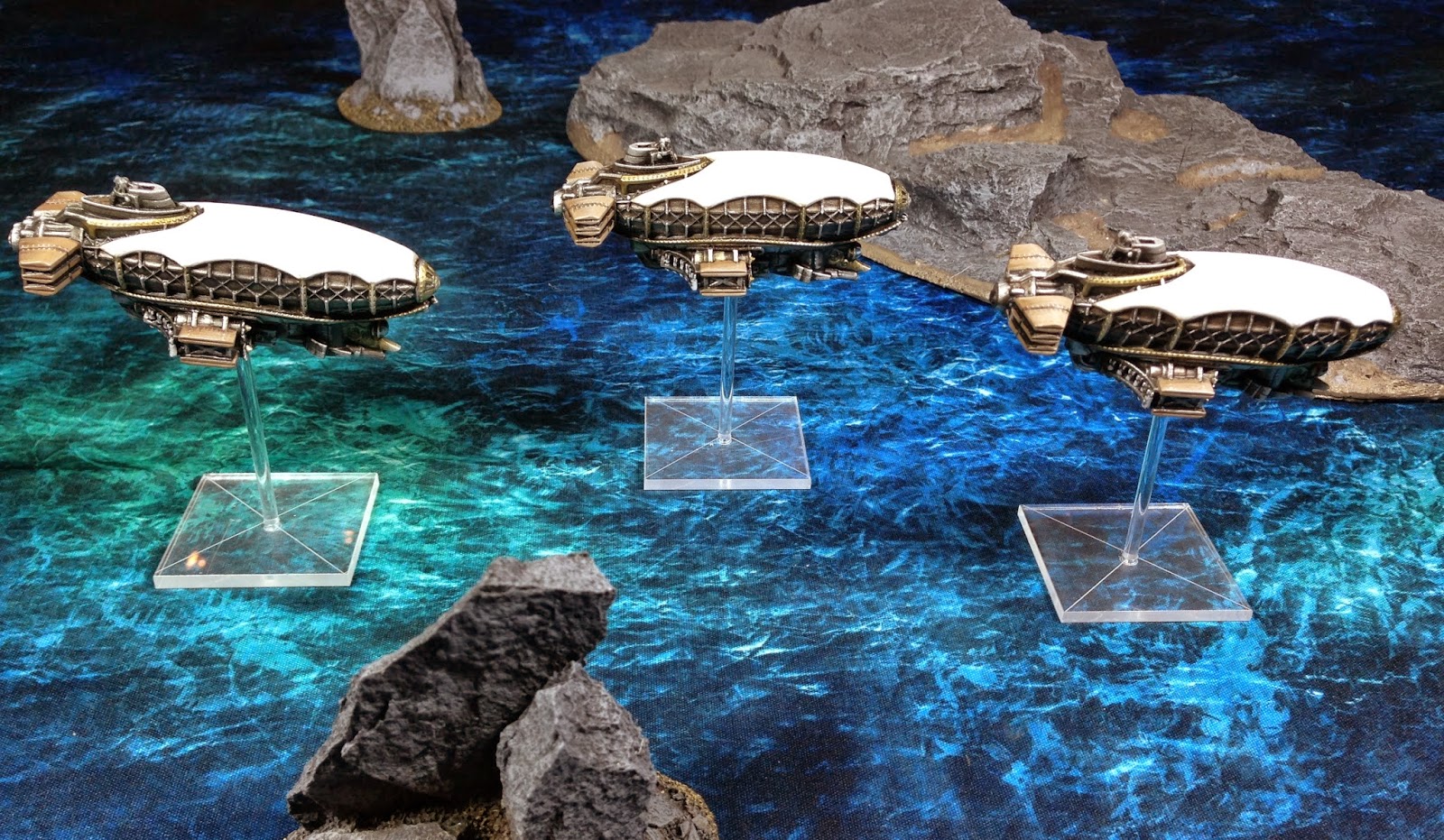 The workhorses of the Eclipse Company, these are hard-hitting, heavy-duty flyers that can take a good amount of damage and still give it out. Their powerful cannons are great at range and up close, the powerful bombs give them teeth when they're on their last hull point, and the high crew values give some potential for boarding. Defensive statistics may be average, but 5HP and a Shield Generator let them last longer than most.

Expensive, and with only one weapon (apart from the highly situational bombs) the Phoenician is still a great investment and provide a solid anchor on a flank for any Eclipse Company force. Keep an eye out for the Sustained Fire on their Fore Guns! 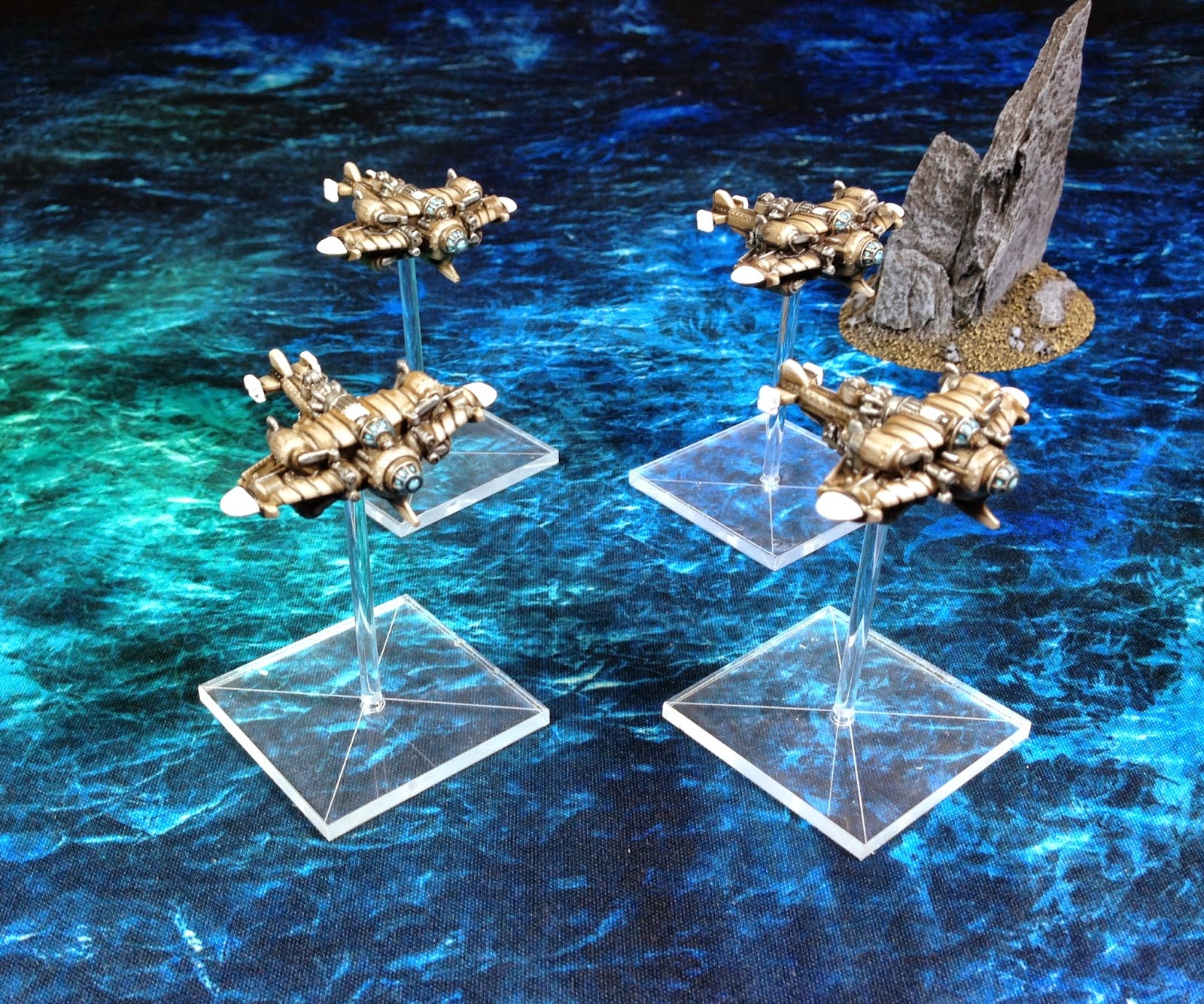 Perhaps one of the more underwhelming units in the Company, the Oceanus Bombers are an all-round less impressive version of the Phoenician-class Scout Flyers, albeit for 30pts less. This saving enables you to have a squadron of four without breaking the bank.

I find the Oceanus best for distracting the opponent in the early turns, and later delivering a rather nasty bomb payload when they least expect it - these guys are fast! Nonetheless, if I wanted to play a smaller points game, these guys would be an easy choice to drop. 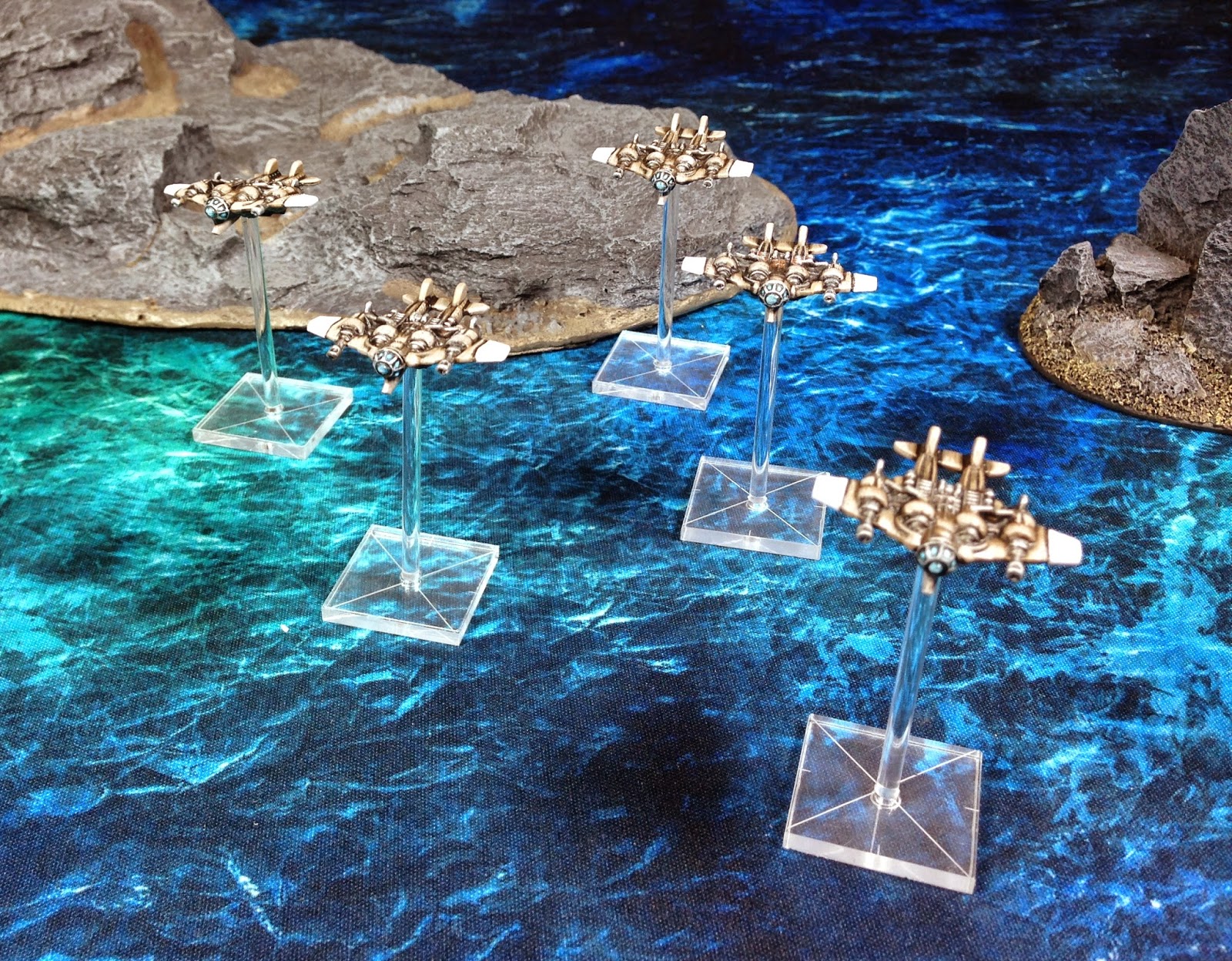 These guys may be expensive, but with Pack Hunter they can cause serious trouble for enemy fliers, and 10AD at RB2 is respectable. They're not going to destroy a Dreadnought, but will be a thorn in the side of any opponent and have the speed and MARs (Hit & Run and Swift Ascent respectively) to keep themselves alive. The points cost does seem high, but matches with most other nation's Small flyers... most of whom are considered overpriced. Hmmm. 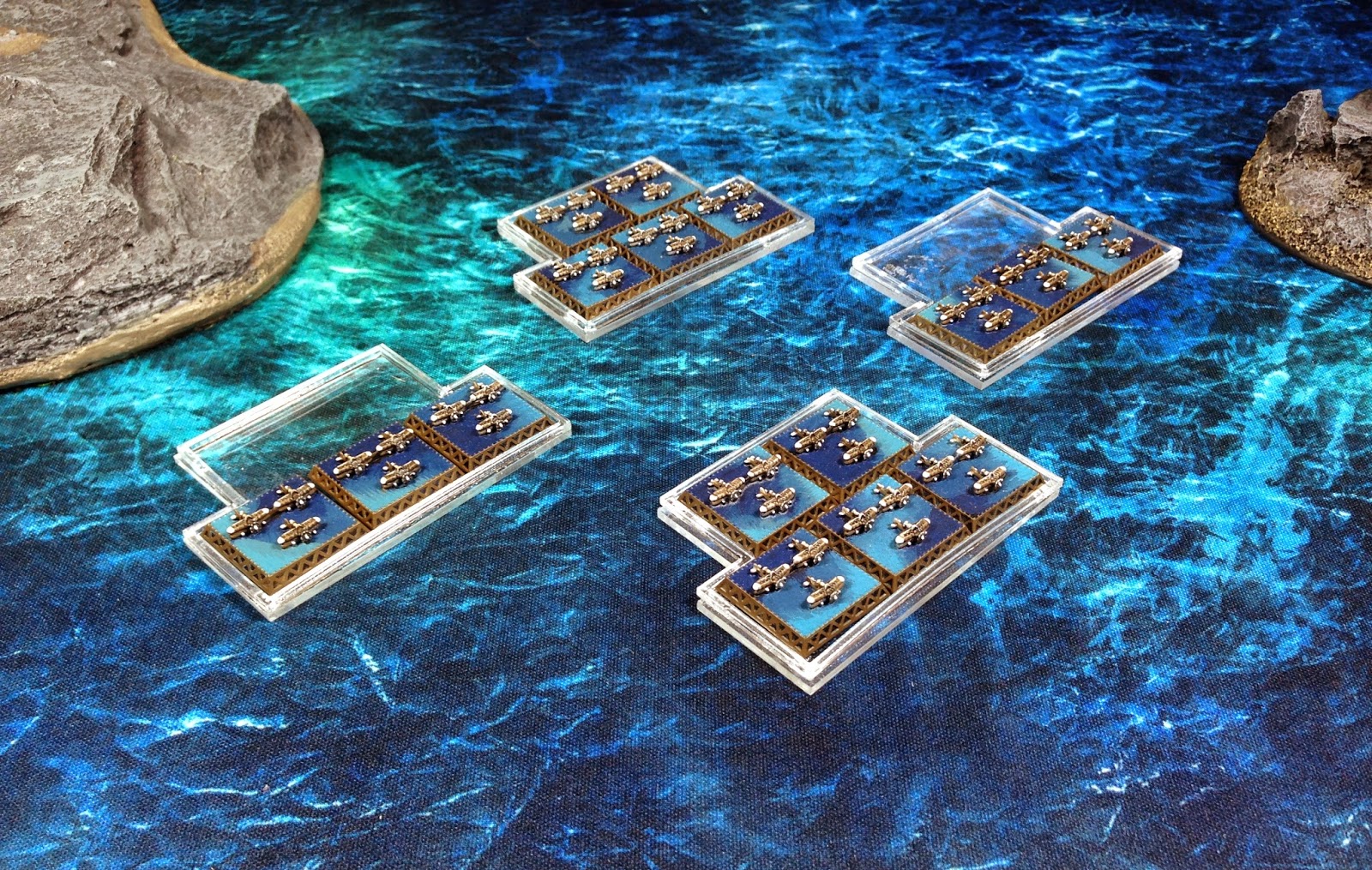 Nothing too special here, though they have the same enhanced speed as the Black Wolf Mercenaries. I imagine this will be standard across the range in the coming edition. Their Acrobatic Pilots give them some longevity, and their bombs/AA give the Eclipse Company a strong sense of theme - aerial domination. 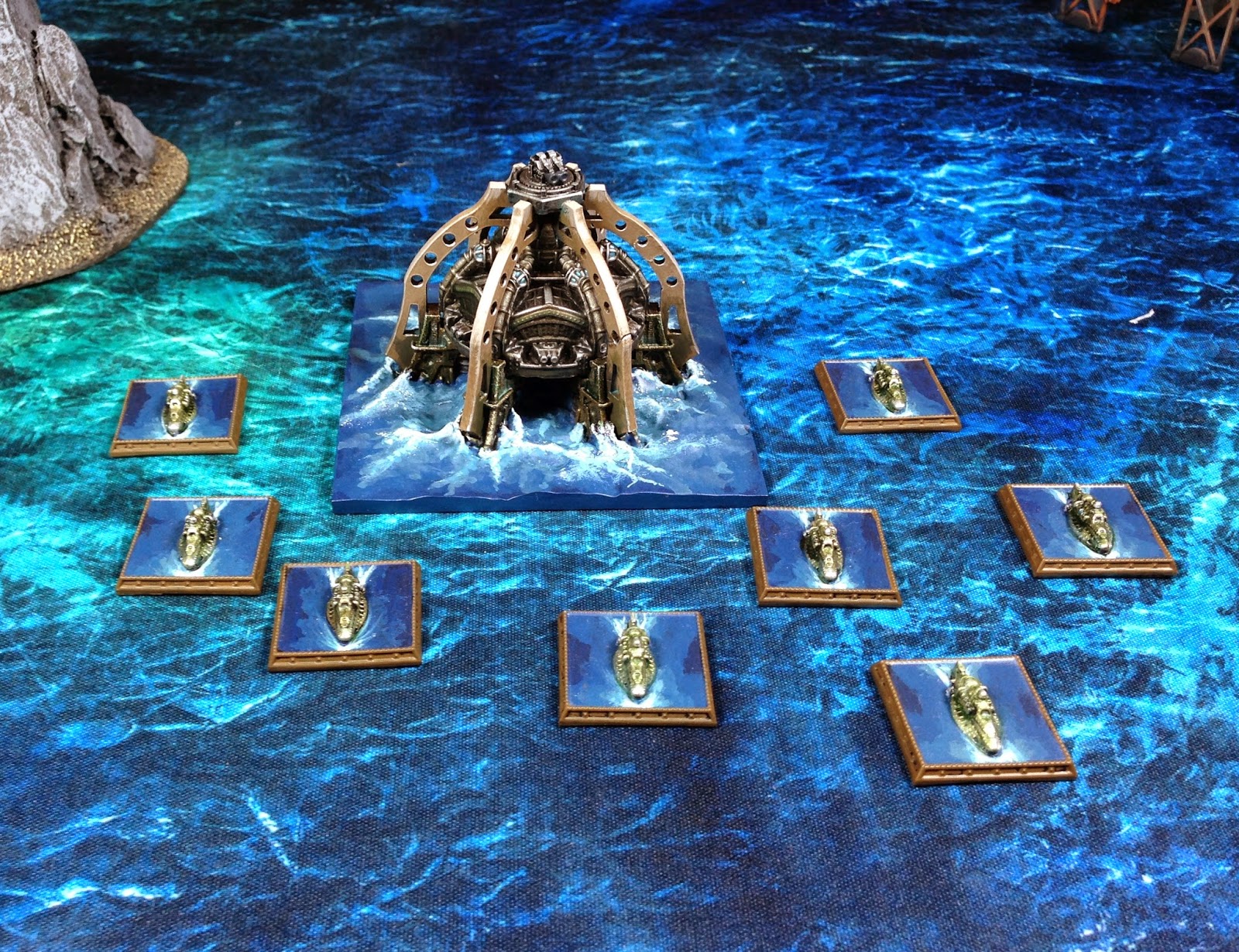 Bringing the Stingray-class Assault Craft to the table and looking the way it does, the Tartarus is something I always love to see on the field. The Redoubtable guns and Guardian Generator (upgrade) are icing on the cake, making it one of the most resilient models in the Eclipse Company force against both boarding and shooting attacks. A nasty surprise for anyone getting too close - don't forget that Pulse Generator!

I like the Tartarus to sit close to the centre, distracting the opponent and soaking up firepower while its cannons caused trouble and the Stingray squadron hide nearby, waiting for their time to strike and protected by the Guardian Generator. An expensive but beautiful addition to the Eclipse Company fleet. 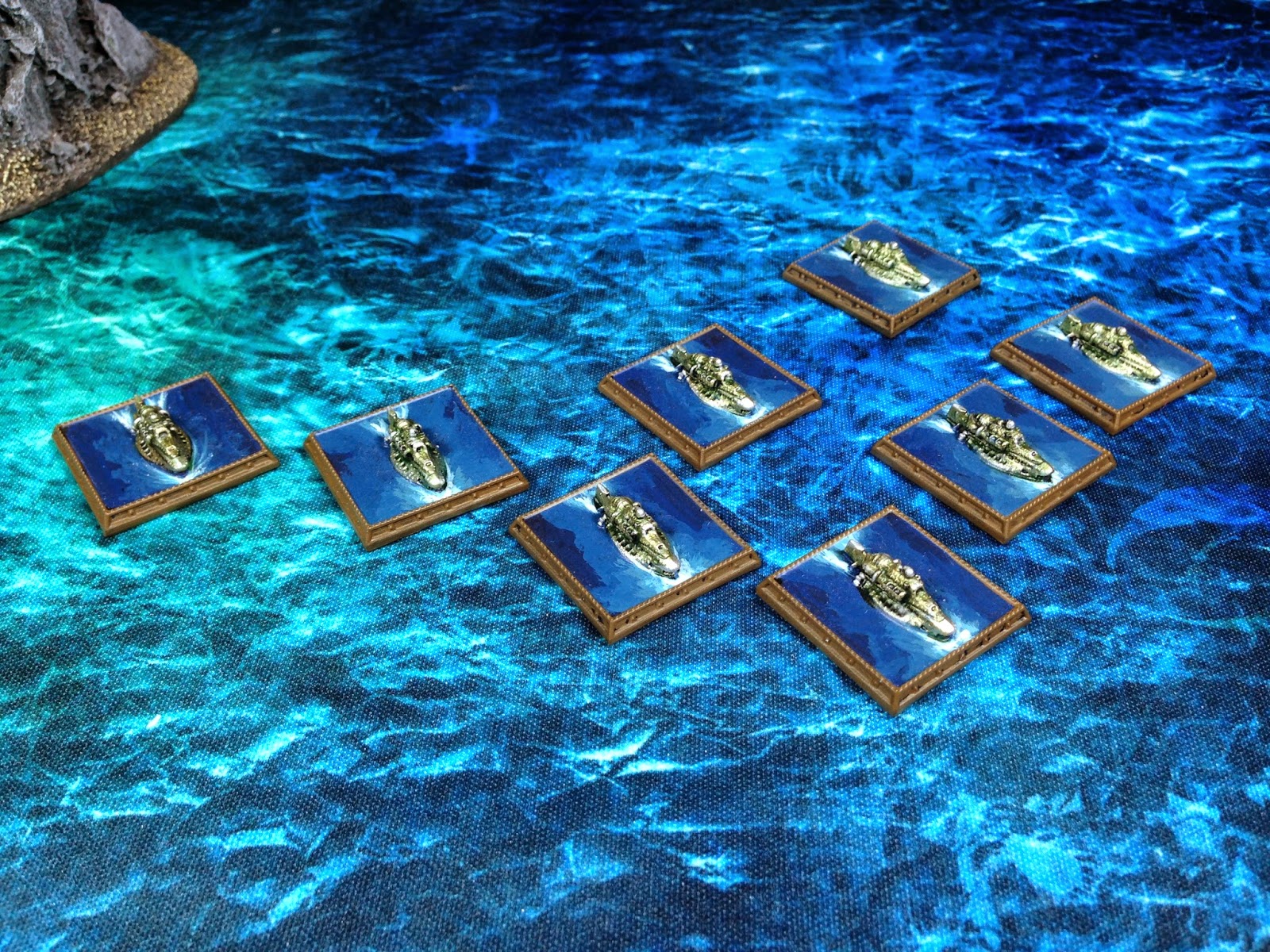 Packed with Ferocious crew, the Stingray-class Assault Craft bring serious boarding power to the Eclipse fleet, offering them the chance for some late game Prizing. Combine with the Elysium and it's Combat Co-ordinator, and these guys can take down an undamaged Dreadnought, but even without it they can be a threat to almost anything. These guys operate in a similar manner to the Australian Crocodiles - keep them hidden or out of sight, and then launch an overwhelming assault as soon as your prey comes too close. 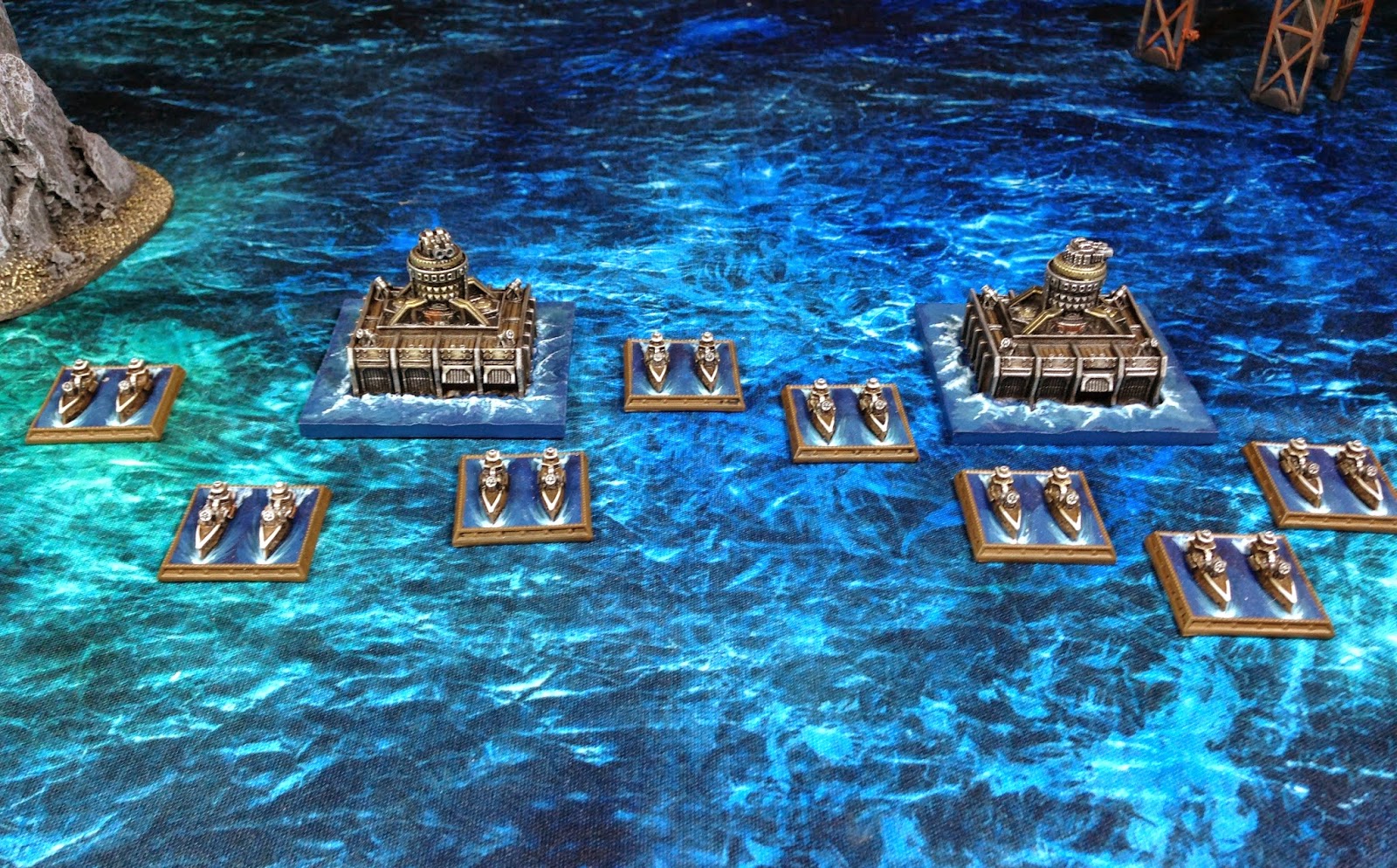 The punching bags of the Eclipse fleet, these models are here to sit and take punishment, in a similar manner to the Tartarus but with slightly less impressive statistics. They also bring the useful Atlas-class Assault Craft to the table. I would always recommend taking these as a pair, so their turrets can link and also so the Assault Craft can form a single squadron. I would not recommend you get too attached to them - it is doubtful they will survive the battle. 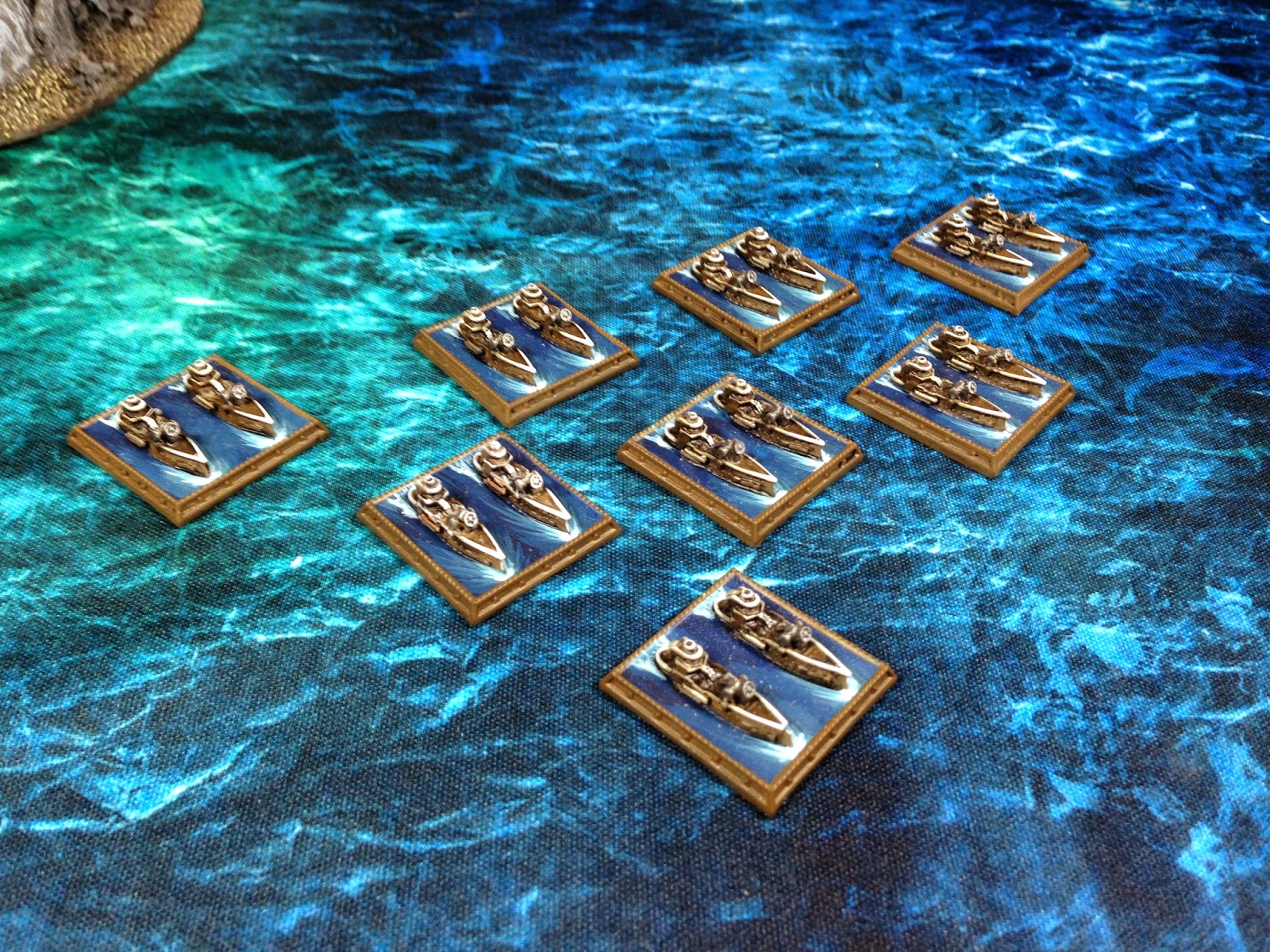 Packed with anti-aircraft weaponry, the Atlas-class Assault Craft give the Eclipse Company an early edge in their domination of the skies, flitting about with their Volley Guns and Hit & Run taking down targets with a death by a thousand cuts. Lovely models, the Atlas are a lot of fun to play, and though they might not be the most powerful unit in the game, they will annoy your opponent no end as they shoot down his favourite Sky Fortress or squadrons of TFTs.

A note on Primary and Secondary weapons - some of the Eclipse Company vessels have somewhat esoteric classifications for their weapons - for example, the big turrets on the Phoenician-class Scout Flyers are Secondary while the tiny Volley Guns on the Atlas Assault Craft are Primary. This, I feel, is something that will make more sense in the Second Edition of Dystopian Wars, so I will not make a huge comment on it. Suffice to say, in the current rules it is an odd set-up.

Overall, I feel the Eclipse Company are a great success for Spartan Games and am impressed with their potency without feeling overpowered. As Mercenaries I have no experience, but as a 1250pt fleet, the two Eclipse Company boxsets make for a powerful little fleet, packed with loads of different sizes and classes that make for a very interesting game.