RETURNING TO THE TOURNAMENT SCENE WITH THE NOMAD NATION 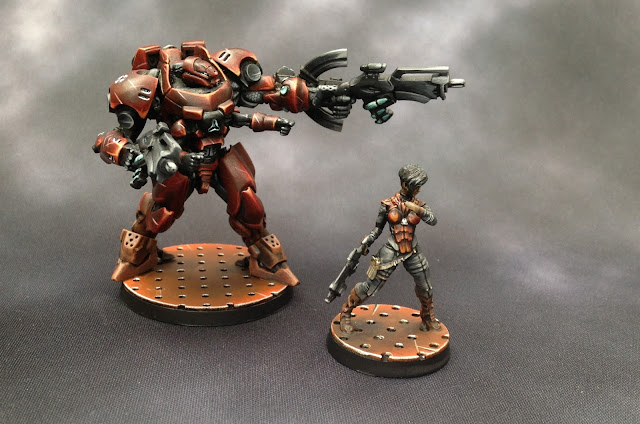 PREPARATION
The Bournemouth Infinity Open - First Strike tournament would be the first tournament at my local gaming store and the first in a long time run by my friend Simon, who in years past had founded and run the Infinity South Coast Tournament System (which is still going strong!). Given the relatively new scene at the store this was aiming to be a beginner-friendly set of games, with relatively simple scenarios, ITS rules (but not reported) and a general recommendation not to bring the most aggressive combinations.

This would be perfect for me as I have not played Infinity competitively for a long time, and has really moved away from the tournament scene in recent months. My recent games has been focused on learning to play again, and some narrative-driven matches inspired by the missions for the worldwide campaign, Strikezone Wotan.

There were fourteen players in the end, varying from some of the best players in the UK to players who had barely played more than five games. I felt I was somewhere in the middle; hopeful for a placing given my good results in previous tournaments, but not confident if I drew any of the veteran players.


THE LIST
Although this was a dual-list tournament, I ended up running the same list for all three games. This was not my tightly-honed competitive list, but a slight variation. I had dropped the second Intruder and Jaguar in favour of a Hellcat with Spitfire and a Tomcat Doctor, and reorganised the Combat Groups.

The first game of the day saw the Jurisdictional Command of Corregidor draw the Caledonians of Ariadna, in the hands of Jozef. His force was big - a group of Wulvers, a smattering of Volunteers, Scots Guard, a Cateran Sniper, 112, Uxia and Wallace himself leading three Galwegians.

I took the initiative, using the Reaktion Zond to cut down both Scots Guard and give covering fire, before the Wulvers managed a lucky strike and disabled it. The Spitfire-armed Hellcat leapt into action, but was similarly removed from the field without success. Stymied by the brute power of the Wulvers, several Nomad units repositioned themselves and lay down suppressing fire.

The charge of the Scots met the superior weaponry of Corregidor, as the Cateran Sniper and a Wulver were cut down by reactive fire from the Intruder. The two remaining Wulvers took refuge in the central building, but were surrounded and Jozef struggled to move. Lucky fire from the Volunteers caused a wound on the Intruder, allowing Wallace and the Galwegians to advance, but they stopped before facing the suppressing fire on the right flank.

Grouped together, they faced the assault of the Tomcat Doctor. Charging from the flank, his flamethrower doused the Galwegians and set Wallace on fire! In a flurry of failed armour saves, he fell and the rest of the Galwegians were similarly engulfed. Somehow the Tomcat survived a pair of broadswords to the chest!

The Wildcats made their move, supported by the healed Intruder. All of the Volunteers, Uxia, and the 112 were slain, and the Nomads had cleared the board by the end of their turn. The Caledonians did not get a Third Turn.

The Scots had secured more Quadrants in the First Turn but it had been a drew in the Second and the Nomads dominated Turn Three. Achieving my Classified Objective, the game ended a 5 - 4 VICTORY.

A fine result, nothing spectacular but I was stalled on my First Turn losing the Reaktion Zond and the Hellcat, wasting a lot of Orders positioning them for nothing. The crucial misjudgement of the Quadrants left the Scots winning the first Turn, which left the score as it was. Nonetheless, a fun game, and a decidedly brutal end with the Wildcats demolishing everything. MVP probably goes to the Tomcat, killing Wallace and all three Galwegians alone, but the Intruder also gets kudos for taking down the Cateran Sniper and all three Wulvers - it was my first time facing them, and they are really tough!

GAME TWO - HIGHLY CLASSIFIED
The second match was drawn against James and his Combined Army. I had played James a few times before in the past, and knew he favoured the big creatures with a number of infiltrating, TO-Camo nasties. This included two Shrouded Forward Observers, a Noctifer Hacker, Charontid Hacker, Q-Drone and other Combined weirdness I don't know too much about. I would have to play cautiously!

Our Classified Objectives seemed to revolve around the High Value Targets - Retroengineering, Inoculation, Espionage all involve getting Specialists close, and Experimental Drug was the fourth Objective. My own private Objective was Data Scan - again with the Hacker! I had only one Hacker, so would have to be even more careful.

The game started well, with the Hellcat jumping straight into the action and cutting down a Baggage-bot before opening fire on the Charontid and killing him in one round of shooting! Awesome! My forces moved up, ready to take down the survivors and secure the enemy HVT.

It did not go well. Suddenly, the Combined Army counter-attack went completely to plan. The Intruder was destroyed with a plasma blast, and the Reaktion Zond fell to a lucky hit. The Hellcat was overwhelmed, and the Nomad forces were suddenly surrounded by Mines deployed by the Shrouded. The Wildcats attempted a breakout, wasting five or six Orders trying to remove the Q-Drone that was suppressing the entire Nomad deployment zone. They failed, after a series of close rolls, and lost their Spitfire.

Attempting to salvage the situation, the Alguacile Hacker tried to run a Data Scan, and failed. The Tomcat tried to revive the Wildcat with Spitfire, and despite the Command Token re-roll, failed. The Wildcat Engineer made a suicidal move for the enemy HVT, reached it, but failed his roll as the Q-Drone blew him apart.

James smashed the survivors, losing a handful of models in the process. After the striking start to the game, my dice abandoned me and James played well, taking full advantage to corral my team and make it impossible for me to score any points. He managed to run his own Hacker close to my HVT, and then ran his Doctor-Engineer into contact, surviving a hail of bullets to score a second Objective.

The game ended 0 - 6 LOSS, with James scoring two Objectives. He beat me by only six points on Kill Points, which shows that even as I lost control, I still managed to cause a good few casualties. Looking back on the game I should have used my Jaguar a lot more aggressively, dropping Smoke to stop the Combined Army shooting me and enabling the Specialists to advance to where they could interact with the HVT. Too often I forget about the Jaguar when the Intruder dies, but here he could have been really helpful. Ah, hindsight.

GAME THREE - ANNIHILATION
After the horror of the second match, I faced Seren in Game Three. I had played Seren once before - his Onyx Contact Force favoured a pair of Xeodron Batroids led by an Umbra Samaritan, and a Link Team of Unidron Batroids with some other assorted Baggage-bots and the like.

I was in no mood to hold my punches, and the Nomads attacked with full force. The first moves saw the Unidron Sniper taken down, and the Umbra Samaritan followed. The Hacker advanced and secured my Classified Objective on the enemy HVT. The Wildcats moved up and engaged in a firefight that saw the majority of the Unidrons dead and crucially, their Nexus Operative Lieutenant on the floor.

With no non-Remote troops left, Seren had no viable Lieutenant. His forces were scattered, but sacrificing his Command Tokens meant he still had some teeth, with which he promptly smashed the Wildcats and left the majority Unconscious. His pair of Xeodrons dominated the last moments of the game, absorbing firepower from the Intruder and Hellcat and taking down both in return.

This late counter-attack left us both battered, despite the attentions of my Tomcat Doctor. Annihilation is a mission based on kills, and we had scored a similar number of Kill Points - that last lucky shot on the Intruder has swung the game back towards Seren! Ultimately my Classified Objective left it a 7 - 5 VICTORY, which feels fine.

This was a good fun game, and I am glad Seren managed to drag it back at the end, as my First Turn was pretty unpleasant for him. The Xeodrons were just too tough to handle, as taking down the rest of his force had left me lacking in heavy firepower.

RESULTS
As the day drew to a close I had managed to score twelve tournament points, which was not fantastic and landed me in tenth position. Possibly my worst Infinity tournament placing yet! I was not too disheartened, though the complex series of unlucky rolls in Game Two still haunted me. Next time, gloves off!

Looking over the day I don't believe I made any huge mistakes - obviously relying on the Hellcat with Spitfire did not work out and I doubt he will appear again, but he did cause a lot of trouble in the early stages of Game Two. The problem is I use him like a tank, and he is better for picking off soft targets in the backfield. The Tomcat Doctor was the only other new addition, and this model was an incredibly useful Specialist. I will try to keep fitting this model into my lists.

There were two other Corregidor players at the tournament, which is great to see. Both players ran very different lists to myself, and I was particularly impressed with Dan and his Remote-heavy list. A pair of Tsyklon Zonds supported with a network of Hackers won him second place, and I already have all of the requisite models painted. Time to give that a go I think!

SOMETHING EXTRA
This was the first test for some new modular terrain from Warmill, who have been the source for a lot of my own pieces. These blocks look cool and are simple both to put together and store. They are designed specifically with Infinity in mind, and I look forward to their development.