RETURNING TO THE DROPZONE FOR THE FIRST TOURNAMENT OF THE YEAR 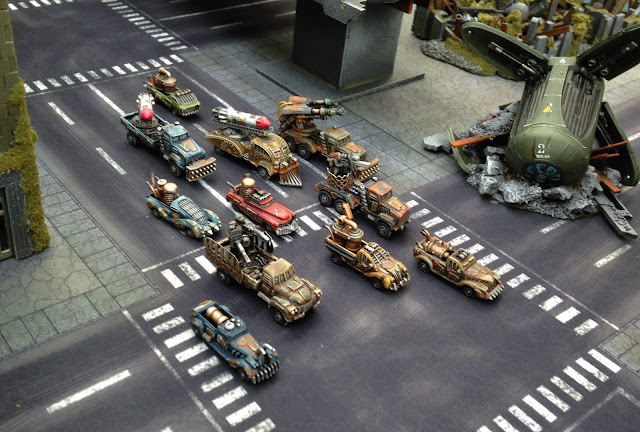 This past weekend Adam and I attended our fifth (maybe even sixth?) Coastal Assault Dropzone Commander Tournament in Brighton, a last hurrah for this version of Dropzone before Second Edition rolls out. Admittedly we're not sure when that release will be, but I don't think we have any more Dropzone tournaments planned in the mean time. Let's see out this Edition with a good day of gaming!

PREPARATION AND THE LIST
In the months since the last Coastal Assault, Adam and I have been playing Dropfleet Commander regularly, including a number of tournaments. We have barely touched our Dropzone models, and it was a debated decision to buy the tickets. Ultimately, the fun we've had at the Dice Saloon and the hospitality of organiser Mike brought us round to the idea - nice and simple one-day tournament for a system we're a little rusty on, sounds like a plan! We were expecting a smaller contingent than normal, but that wouldn't bee too bad - as long as we did not have to play each other!

Preparation for the tournament saw us play a single practise mission, Careful Advance. Adam ran his old PHR force, who had been sitting in their box patiently while he ran Shaltari for the last two Coastal Assault tournaments. I ran with the faithful Feral Resistance, using my standard tournament list.

The game went surprisingly well from a rules-point of view - we were both very rusty (questions like "Are there armour saves in this game?" abounded) but we managed to get comfortable and finished the game in about ninety minutes - a nice pace after Dropfleet.

Another nice surprise was the result - after so many weeks of being battered by Adam at Dropfleet, the Resistance performed admirably and ruined Adam's force. Destroying his home Objective building with all of his infantry in was a bold start to the game, while some great rolls saw the advantage held throughout. Adam was frustrated with the PHR, and vowed that he would take Shaltari to the tournament instead.

THE EVENT
The Tournament itself was attended by six people, giving a more intimate feel than previous Tournaments but still allowing a good competition in a friendly atmosphere. It could be said that this was a sad reflection of the state of Dropzone at the moment, with no new releases for over a year and an unsure future, but we persevered.

The Factions of the day were two UCM, two Allied Resistance, one Feral Resistance (myself) and Adam running his Shaltari. Adam and I looked like outsiders! The opposing lists were largely as expected, though one of the Allied Resistance players was running four Typhoon Gunships which was particularly intimidating.

The first match was drawn against Stephen and his Allied Resistance - an old foe I had faced in both of the previous Coastal Assault tournaments. Both previous games had ended in my favour, but that was not say Stephen was not an experienced and respected player. It usually came down to the luck of the dice!

His list was not unusual - Thunderstorm Custom, two Typhoon Gunships, one unit of Gun Wagons and Zhukov Battle Tanks for AA, infantry in buses and more in a Lifthawk like my own, including Sappers and Veterans. Thunder Wagons, Marine Force Recon and an Archangel Pathfinder filled out the rest of the points.

The game started with some aggressive demolition, as my forces set about causing as much damage as they could to Stephen's infantry. Rolling incredibly well, his two units of bus-mounted infantry based in his home Objective building were crushed, the Marine Force Recon were wiped out by falling debris courtesy of the Barrel Bomber, and the Zhukovs destroyed his infantry-carrying Lifthawk, stranding two units of infantry out in the open and killing the Occupation Veterans.

Stephen would struggle to secure any Objectives without infantry, and was now playing for a Draw. He managed to destroy my home Objective and kill all of the infantry there, while the central building occupied by my own Lifthawk-based infantry was evacuated with two hit points to spare. I had one Objective in my possession, with the Lifthawk holding it sitting in front of two Zhukov Battle Tanks.

A crucial Quick Thinking card saw my Typhoon Gunships rip apart one of the Zhukovs, and the Lifthawk fled. One last attack run from the Archangel Pathfinder failed to stop them, and they escaped with one hit point to spare. The rest of the battle was decisively in my favour, as I mopped up the survivors. One Objective secured and scoring almost nine hundred Kill Points more than my opponent, the game ended 15 - 5 VICTORY.

The game was a lot of fun, and I must say I don't think Stephen did anything wrong. My Falling Masonry rolls were just crazy, and cost him almost all of his infantry! I feel I was bringing in some Dropfleet tactics into this mission - kill the troop carriers and the enemy cannot achieve any Objectives!

The second match was drawn against Dave and his Allied Resistance, featuring the horrific four Typhoon Gunships. Dave was a known good player and had always done well at the Coastal Assault tournaments, winning several of them. His force was largely standard for Allied Resistance, with the aforementioned four Typhoon Gunships and a Thunderstorm Custom in the HQ Battle Group, two units of Gun Wagons in a Kraken, four bases of Sappers and some Freeriders, Resistance Fighters in a Lifthawk, Marine Force Recon, and an Archangel Pathfinder.

The game was tense, as we knew each others strengths well. I quickly dealt with the majority of the Sappers by crushing them with rubble, but could not stop the last of them using an Underground Monorail to secure the central Bunker. His Freeriders held one of his Bunkers, while the Marine Force Recon held another. The enemy Lifthawk was barrelling toward one of the Bunkers on my side of the board, and I resolved to stop them - two Zhukovs knocked three Hull Points off it, but three Gun Wagons (despite five hits!) could not score the final damage point and his three units of enemy infantry made it into the Bunker. I reacted by sending my own three units of infantry into the Bunker, far too early it would turn out. I figured with some Feral Command Cards I would be able to cut them down in combat, but Dave summoned Colonial Legionnaires to aid him, and the combat swung decisively in his favour. Another Bunker lost!

Out in the streets, the four Typhoon Gunships were causing havoc, but equally my own forces were hurting the enemy. I dealt with his anti-aircraft units quickly and the Archangel proved ineffective throughout, allowing me to dominate the skies and reduce his forces to the infantry cowering in the Bunkers and a handful of Typhoons.

Over six turns the weight of fire dragged me down, but with careful positioning I was dragging it back slowly. A dastardly Central HQ Objective played in the closing moments secured Dave the initiative, and with it he managed to contest the central Bunker.

The game ended with Dave holding three Bunkers and contesting one, while I held two and contested two. Six versus seven on Objective Points plus Dave winning by seventy-four Kill Points left it an 8 - 12 LOSS.

This game was tense, really coming down to a handful of dice rolls (as the best Dropzone Games do!). If I had been more restrained with my Lifthawk-based infantry, or managed to bring down his Lifthawk, I'm sure it would have gone another way, but equally I was very lucky with his Archangel causing three hits in five turns of shooting! Dave had a better list for this mission, with his infantry spread over several different Bunkers while mine are concentrated into two transports. I was pleased by how the ground game went, and it was amusing to see how one-sided the game looked from an outsider's point-of-view. Ultimately, it is won on Bunkers, and Dave beat me handily.

Kanan was my opponent for the third game, a well-known gentleman in the community who I have never played before. Nice to find two new opponents this weekend! His UCM force was impressive - a Phoenix, Eagle with three Katanas, two units of Legionnaires, two units of Praetorians, some Wolverines, two units of Rapiers and two (!!!) Broadswords in a single Battle Group - they would be difficult to shift in the right position!

Deploying in the corners, I was impressed by his deployment of the Rapiers to deny my Typhoons a good position to advance. The two Broadswords they made a strong beeline for the right-hand Critical Location, loosing shots into my Thunderstorm and causing a lot of damage, though I feel they had deployed a little too early given they were unable to reach the Critical Location. I concentrated on the buildings (as I usually do) in the early turns, destroying both Kanan's home Objective and the central Objective building, and with them three of his infantry units. My own forces secured my home Objective and whisked it off the board.

By Turn Three I had units on both of the Critical Locations and sacrificed the Gun Wagons to bring down both the Eagle and the Phoenix, which could not escape their impressive threat radius. The Rapiers caused havoc on the Typhoons and the Broadswords finished the Thunderstorm, but they were slowly dragged down and out of position to contest the Critical Locations.

Kanan did well to kill my most powerful units and slow me down, meaning that by the end of the game I had only scored a handful more Kill Points. I had, however, scored a great deal more Objective Points and the game ended a solid 17 - 3 VICTORY.

I was really impressed with Kanan's list and feel with a little more practise with the mission he could have caused me a real headache. More aggression with the ground forces and more restraint with the flyers would have really helped him. Ultimately the demolition power of the Feral Resistance denied the UCM the Objectives and his desire to get shooting early meant I had the Critical Locations under my control for long enough to score a lot of points.

RESULTS
Finishing with two solid wins and a minor loss, I had accrued forty Tournament Points - enough to finish Second! Nice! Adam finished a couple of points behind and landed Third, while Dave and his vicious Allied Resistance with four Typhoon Gunships achieved First with three good wins - I think with forty-eight Tournament Points.

My army also won the Best Painted award, which is always nice.

The day was a nice break from Dropfleet and painting Necromunda - I always enjoy a road trip with Adam up to Dice Saloon, and since we both won some vouchers we bought a few things at a nice discount.

All in all I am glad we went, but it didn't really get my Dropzone juices flowing (I think we'd both rather play some Dropfleet!). The system holds up and we're looking forward to the next Edition a lot (with some new releases, please!).