SHOWING OFF HOUSE GOLIATH SO FAR... 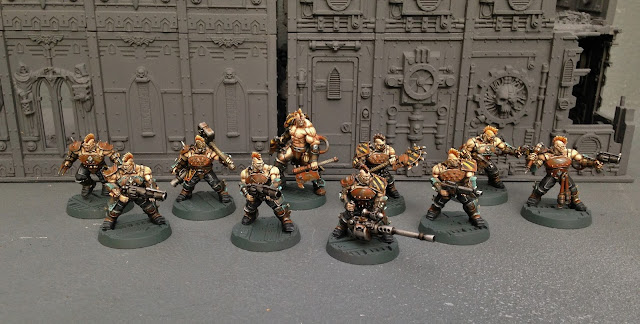 The first post of the year sees me reveal the long-awaited Necromunda project I've been working on for the past few weeks! So here we are, the first ten models completed for my House Goliath Gang the Rust Belt Overlords (the 'Belters).

I've been working on and painting these since the release of Necromunda before Christmas, and as much as they have been an absolute blast to paint, they have also been a time-consuming project! Working from a grey undercoat has been a big test, as these models are chunky and crammed with detail.

I have built more than twenty different Goliath models at this point, including converted Juves and heavy weapons. The ten models you see here are not intended to be in my starting gang (indeed, the autogun and heavy stubber cannot be taken as starting equipment) but were the models I fancied painting first - a mixture of conversions and poses copied straight from the box.

I'm still not sure on how I will paint their bases - rusted metals and black/yellow chevrons might not be the best choice as it will blend in with the models themselves. We will have to see. Next up - more Goliaths, to get my starting gang up and ready for the campaign slated to start in late February.