SHOWING OFF THE CHINESE FEDERATION FOR THE NEW EDITION 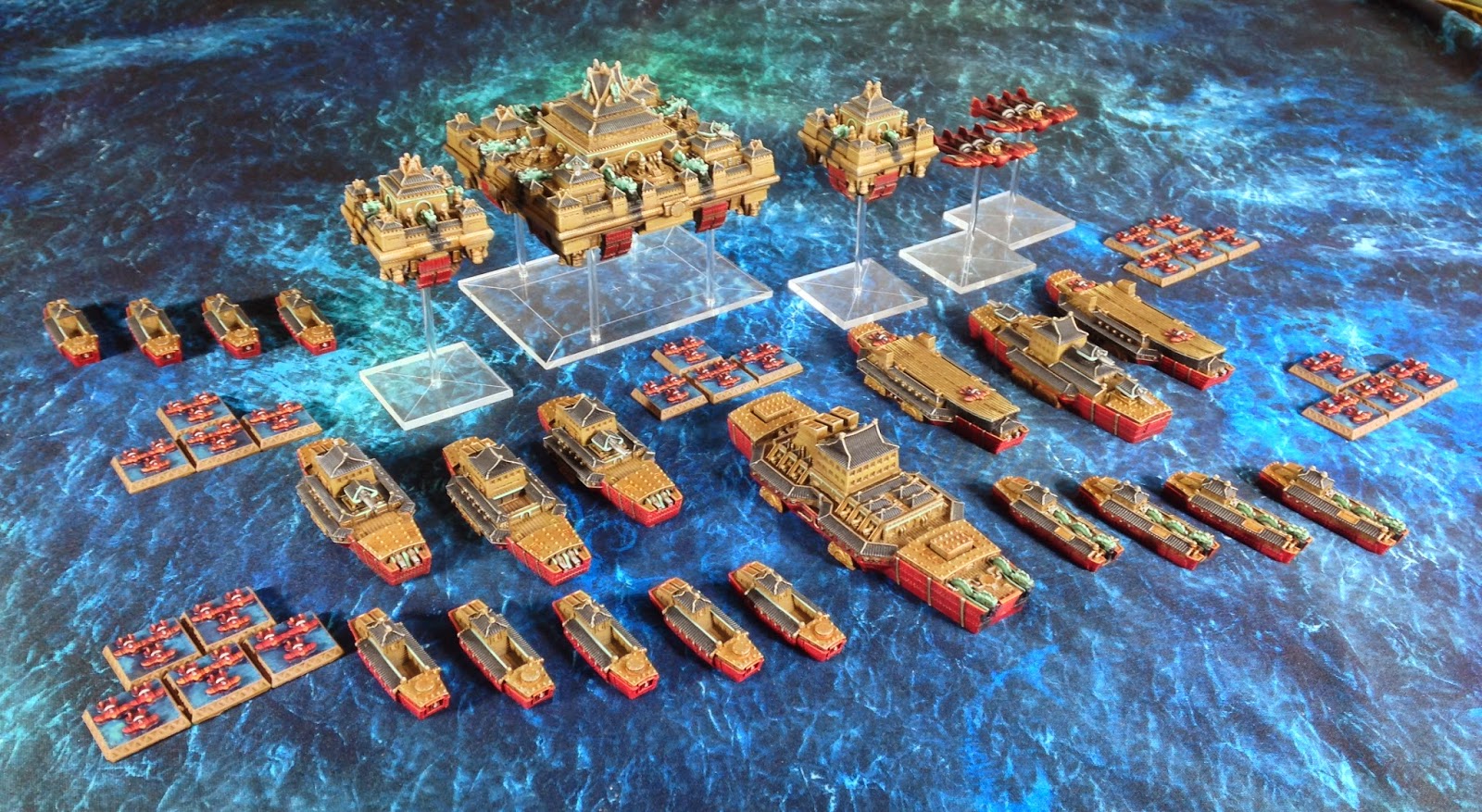 I may have painted this fleet quite a long time ago, but I thought with their recent activity in our tenth Battle Report and a new set of rules with the Second Edition of Dystopian Wars, it was time to have a closer look at the Chinese Federation.

The Chinese Federation have some of the most striking ships of all the models currently released by Spartan Games, distinctly historical in flavour and covered with all kinds of small details that really add up. The dragon-shaped flamethrowers are my particular favourites, but the wonderful roofs with their Forbidden City look, the "Floating Great Wall" of the Bastions and the kite-like flyers are other aspects of the fleet that really make it stand apart.

They were a joy to paint and suited a strong, bold colour scheme with an assortment of colours I had not used for Dystopian Wars before - rich golds in abundance, deep reds that highlighted almost up to yellow, and jade details on areas of banded armour and sculpted dragons. This was drawn almost entirely from the studio scheme for the Chinese Federation, though I may have switched a few colours or highlighted others slightly differently.

Painting the fleet was quicker than initially expected - given the running aesthetic theme of the fleet each of the ship classes share a great number of details. The models were initially sprayed a yellow-brown and the painting began from there, which did most of the work on the superstructures by itself. The roofs were painted a black-grey and then drybrushed carefully, while the red probably took the longest working up from brown-red. Gold and jade details were done last, with the jade dragons taking the most effort as I wanted them to be the focus of the models that featured them.

One the lightest and more colourful of the fleets I have painted, they look great on the table and certainly stand out from the fifty shades of grey my other fleets tend to come in!


THE FUTURE
The fleet has seen some games now, but with a new Edition come changes, and it seems high time to bulk out some of the smaller squadrons and bring everything in line with the other fleets. The Chinese Federation are a fleet that both myself and Ben enjoy playing, and it would be nice to have some more options.

This being the case, I picked up a second support box which was split between Ben and a friend of ours, Dr. Alex of Breakthrough Assault fame. A further Dun-class Bastion, Guan Dao Battlecruiser and Chui-class Support Cruiser (with SAWs) will bring two squadrons up to full size and add a second of the wonderful Battlecruisers, something I am sure I will regret playing against I am sure! Painting will begin on these sooner rather than later, though I make no promises as the number of unpainted ships sitting on my painting table is... somewhat embarrassing.

When I get round to placing a Parts Order with Spartan (should they develop their Parts Service a bit more... I would like a few individual ships from a LARGE number of fleets) I will be picking up a third Luxing-class Air Bombard and some more SAW tokens to give the Zhanmadao the option for the full complement of 12 (!) SAWs.

Dr. Alex has received a Dun-class Bastion, Chui-class Support Cruiser and four of the Yue-class Destroyers - he likes his flame weaponry! I hope one day we can get some pictures of his Chinese fleet for the blog - a very different colour scheme than my own, with greens in abundance.

Further in the future, the leaked pictures of the Robot Dragon have shown that support for the Federation is not over yet. If the Nation does get more models, I suspect it will be mainly as Land-based forces, but any that can be used for Naval Games (Surface Skimmers, etc.) will be picked up, no doubt. I am currently debating how to paint it... traditional red and yellow or a more jade green dragon to match the weapons of the fleet? Perhaps I will have to get two...

In a future post I may talk tactics and gaming experiences with the Chinese Federation, but might need some more experience first. In the mean time...