The Crooked Grin of Corregidor 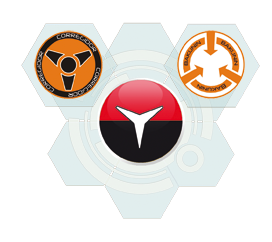 In this post I will be showing off my completed team for the recent Infinity Tournament attended by Winner Dave and myself, talking about some of the colour choices and some of the more difficult parts of painting these exquisite models, as well as some of my future plans for Infinity.

Apologies to all those readers who have been visiting for Dystopian Wars and are getting sick of all these 28mm filth... rest assured the ships will still sail, but with a local shop opening and the promise of a lot more opportunities for Infinity, this blog might end up shifting focus to give attention to both systems (and any other systems that pass my painting and gaming tables).

For the scheme, I knew I needed something I could paint fast and well, so I decided to work with a lacquered red - not a solid red like the studio scheme but something sleeker and more sinister. I wanted it to give the impression of style as well as substance. The cloth underneath the armour was painted grey as a contrast, and I knew spot colours would appear across the force - whites, yellows and turquoise for the glowing screens and lights.

The red was painted up from a dark brown, with increasing amounts of red added before reaching pure red at the edges. Highlights from there came by adding ochre, and then the armour was washed with a red/brown glaze. Chips were added with a red/tan blend, which was then edged with black and finished with a thin line of Vallejo Silvergrey. This armour was given a gloss varnish before the final matt varnish was applied.

The guns were also painted grey, but using colder Vallejo Sea Grey rather than the Grey Green for the cloth. This was washed with a black glaze to keep it looking like metal. Other spot colours include the yellow for the hazard markers, white for numbers and kill markings, and the brown for the pouches and satchels - this was Vallejo Deck Tan highlight up and washed down.

For the basing, I wanted something that resembled a rusted space station or platform, as an idea I have for a future campaign is set on a ruined orbital installation. I knew orange would work well with the colours chosen for the force, and also wanted to try out some new techniques and paints I had recently acquired. At first I did not know how much the orange would come to dominate the force, but I am very happy with the final result.

After the initial models were painted, I had some serious issues with my spray varnish and almost completely ruined several of the models. They were only saved with some pretty desperate techniques and serious, Malcolm Tucker-level swearing. By the end of the week, some of these models had three, four or even more layers or varnish on them, which has made elements look thicker and less defined than I would prefer. Shit happens, and here we are. I'll know for next time!

A team finished on a tight deadline, but I am very happy with them nonetheless. Hopefully you like them too!