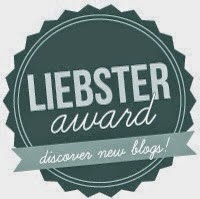 I've never been very good at receiving awards, or even nominations, but I must thank my Mediocre Friend Ben over at Malibros for nominating Full Spectrum Dominance for a Liebster award. As he put it himself when he was nominated by Richard at Workbench Warriors, "Liebster" is an award given to bloggers with less than two hundred followers to spread the word and get people to "discover new blogs!"

With this nomination I get some nominate some bloggers myself and give them some questions to answer about themselves and their blogs - after answering the questions Ben had for me, of course.


I've always been a science-fiction nut, and loved Star Wars since childhood, so it would be easy to say Episode I, but the biggest disappointment in recent memory was probably Prometheus. The trailers were glorious, and Ridley Scott back in control of the franchise seemed like the best idea I'd heard in a long time.

As it stood, the symbolism was at once ridiculously heavy-handed and so confusing it needed a pamphlet guide to read through after viewing. I could follow the movie, don't get me wrong, but the character motivation and the directions the movie took (twists for no reason, random scene order, etc.) turned it from a movie into a series of loosely connected, pointless (albeit cool) scenes.

I'm still a fan of the movie, and have seen it more than once since it came out on DVD, but more as a guilty pleasure than the "best movie ever" I had hoped for. I made the mistake of building the movie up in my head so much before I went to see it on release, and nothing could match that.

Michael F. Assbender is still great though... and I'll still watch the sequel.

Nice question. In the age of small gaming companies and skirmish games, so much seems to have been created and bought I struggled to think of one. Knight Models are killing it at the moment with their Batman/DC property and the work they're doing with the Marvel and Watchmen universe. Conan the Barbarian has a game coming soon, Alien versus Predator had a kickstarter last year and Starship Troopers already had it's chance.

A miniature wargame in the Game of Thrones world would be pretty cool, I think, and something a lot of the same crowd that enjoyed Lord of the Rings would be interested in. I'd also love to see a Star Wars game, at any scale - so many have come and gone over the years.

I don't play video games, and have only really played ones that were super popular. My favourite is still any/all of the Command & Conquer games and Unreal Tournament, which shows how much I play! In terms of pure imagery I think the first few Silent Hill games were incredible.

I watch a lot of movies, and I watch a lot of trash movies most people would think are terrible. Some of these I have loved over the years and will never admit to being "bad movies" - Commando, Tron Legacy, Face/Off, Universal Soldier... more or less anything from the 80's Action genre.

I think the fourth Alien movie may clinch it though - Alien: Resurrection is a bit ropey, but I can't help but enjoy it - the crazed visuals, the creepiness of the Newborn, the homage to Giger that echoes through the script. The whole movie is Joss Whedon meets the Alien Franchise meets crazed French director, and though I'm not a Whedon fan boy, I am interested enough in taking the Aliens in creepy new directions with some familiar tropes from the old movies to always enjoy it. The stereotypical pirate crew mixed with the stereotypical army guys, along with a wildcard in the form of a resurrected Ripley is fascinating to watch.

I must admit that I don't read many blogs - and of those I do, most have more than two hundred followers or have already been nominated! Check out the Malibros and the Lost Lighthouse for some interesting reading, anyway.

I will nominate my Good Friend Ben and the guys over at Breakthrough Assault, a fairly major Flames of War blog that only (!) has 187 followers. They have a pretty steady stream of decent Battle Reports, painting guides and articles on tactics, as well as their own podcast!

My questions to Ben and friends...

That'll do for questions.

Thanks again to Ben for the nomination and the questions, and for reading,