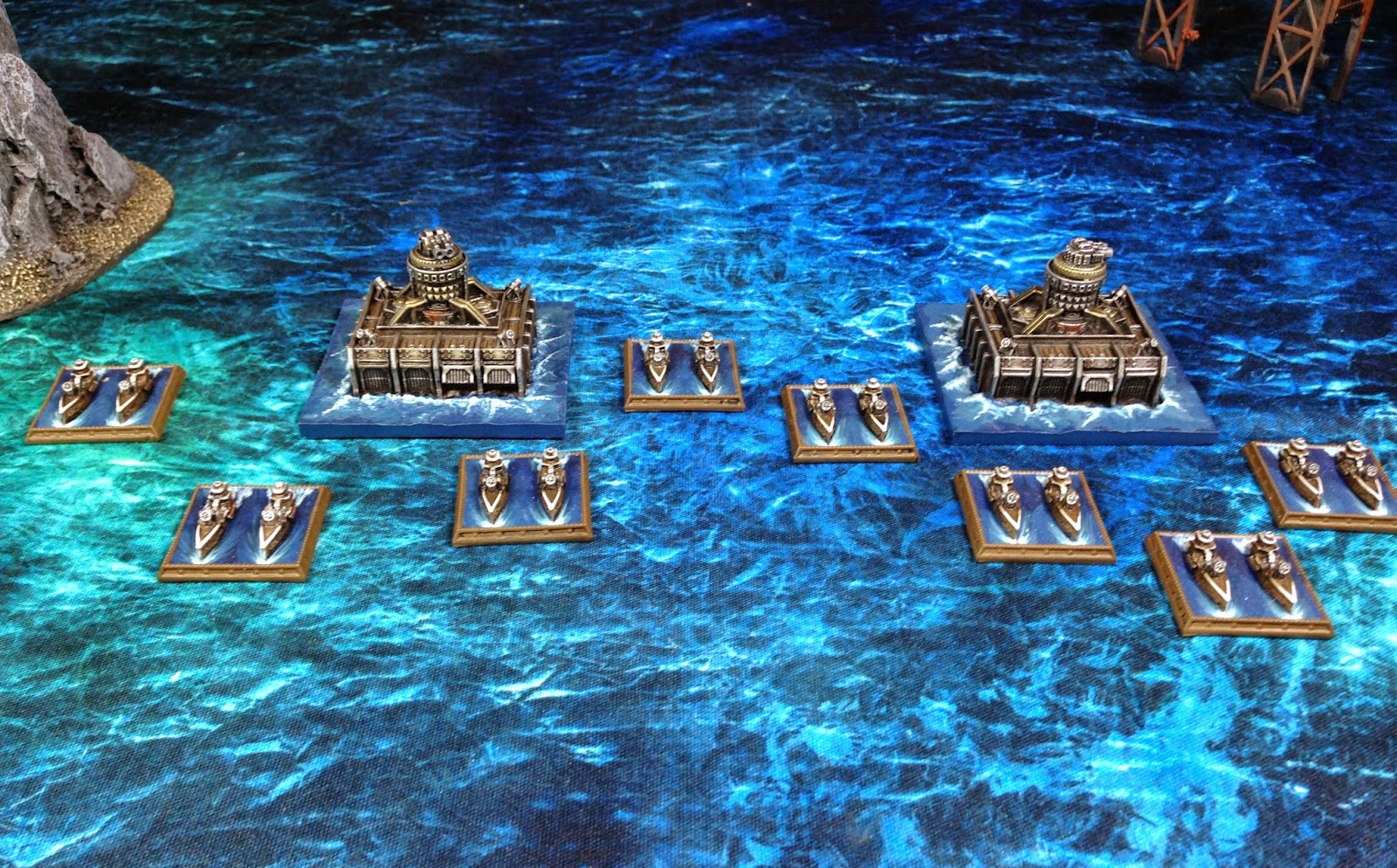 Welcome to another Battle Report at Full Spectrum Dominance! This week sees the first appearance of Mike's newly painted Chinese Federation, and opposing them the Honourable Eclipse Company return to the field in full force.

This game takes focus back to the South China Sea, as the Chinese Federation continue their aggressive attacks in all directions. This time however, the Grand Coalition have lured a Chinese Battle Group out of position and into the sights of their mercenary allies - the Honourable Eclipse Company. Relatively light on terrain (especially after the last game), this game would be a reminder for us that Dystopian Wars is not just fought at sea - the Eclipse Company would be bringing a large number of aerial assets to the game, as well as Fortifications and some Submarine action from the Federated States of America.

I had said some rather derogatory things about the Honourable Eclipse Company in the past - their armament and statistics in the new Edition of Dystopian Wars are certainly not what they once were, but perhaps I had been unfair. This game would be a good chance to try them out once more.

Setting the game at 1,500pts, we both drew Secret Objectives. Mike chose to exchange his drawn Objective for the Free to Engage, meaning he would have to Capture or Destroy 70% of my fleet value (1,050pts). In turn, I naturally drew Free to Engage as well. The stage was set for a bloodbath!

Allies
The Federated States of America

THE AFTERMATH
In the wake of that bloody three turns, the Honourable Eclipse Company and their benefactors scored 1,575 Victory Points and fulfilled their stated Objective, while the Chinese Federation only scored a (still respectable) 804 Victory Points. Victory to the Grand Coalition and their Mercenary allies!

CONCLUSIONS AND LEARNING POINTS
A brutal affair, as usual. The Chinese Federation are consistently tough and deal out huge amounts of punishment with their flamethrowers, Concussive turrets and Incendiary rockets. So many tokens! On top of that, they have ridiculous numbers of AP on their vessels and access to swarms of Dive Bombers and fighters with their cheap Carriers and Swarm Tactics. So what went wrong for Mike?

Mike reckons the protection offered by the Dun Bastions is not worth holding the fleet back - especially in the opening turn, his fleet was slower than usual and failed to get into the best range bands. In the following turns, it was too late as the Eclipse Company flyers were overhead dropping bombs and the best Chinese ships had been dealt with.

As usual, Mike is also unimpressed with the quality of the Battle Cruisers - they are too easy to take out of the game, as their defences are far weaker than the Battleship and their damage output falls too quickly as they take damage. For the price of the two Battle Cruisers, Mike would much rather a second Battleship, or squadron of Gunships.

Isolated Systems once again proved its worth - such an annoying rule when your opponent is rolling well! I guess I can't complain too hard when my Swift Manoeuvre rolls were equally good.

The Honourable Eclipse Company performed well, and though I was getting worried in the early turns when the Chinese Commodore ability "Wrath of the Red Dragon" had his conscripts swarming my Scout Flyers and Bombers, the high AA values of the airships protected them, or at least cost him so many AP to take that they were easier to deal with later in the game.

Later in the game, the aerial superiority of the Eclipse Company proved invaluable as they cleared the skies of Chinese Bombers and Fighters, allowing them to bomb and strafe as they pleased. This shows the game can get unbalanced quickly when one player is fielding lots of Aerial assets, and I imagine a more equal game where Mike was fielding some Interceptors would be more even.

This aerial superiority gave them the edge they needed, as in my mind the Oceanus-class Bombers and the Hades-class Interceptors were not hugely impressive. The Oceanus-class Bombers did do (surprisingly) well with their Bombs, however, so I cannot be too derogatory. In fact, looking back on it both squadrons caused more damage than their mediocre stats on paper would suggest. Thus proves the value of playtesting!

The Phoenician-class Scout Flyers continue to impress, however. Their combination of MARs and huge firepower makes them an easy investment every time. Mike was right to try and get rid of them as soon as possible. Later in the game, when only one remained, it still managed to cause significant damage across the board.

The Fortifications were poor, as usual (the AD-values on their guns are pitiful), but they absorbed a good amount of damage and their Guardian Generators were nice to have. The real value, however, is their Attack Craft. The Stingrays took down two Battle Cruisers, and the Atlas Attack Craft destroyed a Cruiser and harried several other squadrons - bravo! In combination with the FSA Turtles they caused havoc.

The Americans were fine - the Submarine once again proved its worth, and the Assault Carrier still had teeth when the Chinese had caused it significant damage. The value of Devastating Ordnance! The Destroyers did not manage to achieve much, and if I was to play again I would either target easier prey or swap them for a big pile of Corvettes.

Overall, the Honourable Eclipse Company acquitted themselves well, and though I was worrying at the start of Turn Two, their powers combined with the Devastating Ordnance of the FSA ships and some excellent Boarding actions caused a landslide of bad results for the Chinese fleet, picking them apart and reducing their strength.

In the future, without American support and facing an enemy with more Aerial assets, I think it would be a far more even game, but as it was, they had a great combination of aerial supremacy, Boarding power and Devastating Ordnance that crippled the Chinese Federation.

THE NARRATIVE
"The trap at Great Natuna was a massive success and the Second Element of the Nanyang Fleet utterly destroyed. This, the first great victory against the Chinese Federation in months, was celebrated accordingly with toasts across the world and medals for all involved.

The Honourable Eclipse Company demanded their fee, however, and the price would rise if they wanted another victory like that in the future..."