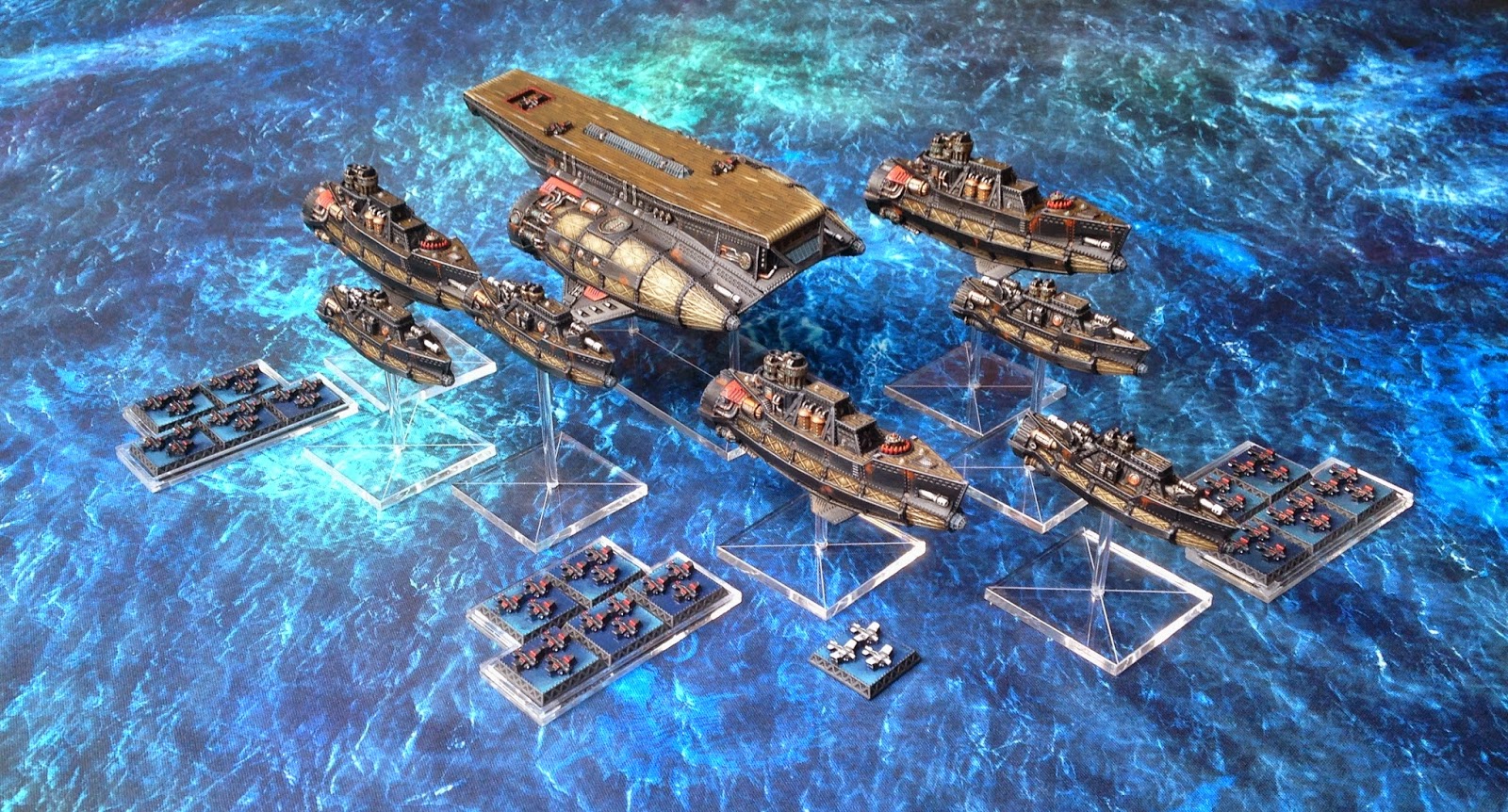 The Black Wolf Mercenaries are the focus for the this week, with the new Aerial Battle Group dominating my painting schedule and a deadline to meet if they are to feature alongside the Naval Battle Group in a future Battle Report.

The Black Company has always been a compact yet deadly force, their naval assets built around a small number of heavily-armed and armoured vessels such as the Nemesis-class Battle Cruiser, Manticore-class Support Skimmer and the indomitable Deathbringer-class Submarine.

Clad in layers of Ablative Armour and with access to Guardian Generators or the slightly more subtle (yet no less effective) Dilation Field Generators, as well as Kinetic Generator to give them as edge in the Movement Phase, the ships of the Black Company can be relied upon to get close to the enemy before opening fire with incredibly brutal Main Turrets (featuring Devastating Ordnance), or attack from a distance with Rocket Batteries and (High Payload) Torpedoes. Elite and Stoic Crew give them the edge in boarding actions, and their auxiliary statistics are nothing to be sniffed at.

In support of these heavy-hitters, the fleet is bolstered by squadrons of Fury-class Frigates armed with deadly Fore Guns carrying Devastating Ordnance, and the gnat-like Reaper-class Attack Submarines - torpedo-carrying drones who work as a swarm to bring down the greater foe. Powerful squadrons with the element of surprise, they can fall apart quickly if the enemy is allowed to retaliate, and should be protected or positioned where the opposing player cannot turn on them.

The limitations of the Black Company can quickly become liabilities in the hands of an inexperienced player. Featuring so few individual vessels, the Battle Cruisers and Support Skimmers can be overwhelmed if caught out of position, without the support of their Frigates or neighbouring vessels. It is too easy to get greedy with these Medium vessels and charge forward to get the optimum range for the Main Turrets, only to have the entire enemy fleet target and destroy them at equally optimum range. Escorts in the form of attached Fury-class Frigates are an option, but not a cheap one.

The Submarine is similar - with no Swift Manoeuvres, it can be caught out when it surfaces to fire and quickly swarmed by enemy boarding parties or a squadron of heavy guns. It has a fair AP value and good AA, but is still a lone vessel. The protection of the squadron is not something the Black Wolf Mercenaries are used to.

In addition, these vessels all carry a Strategic Value, making the Black Wolf Mercenaries worth a great deal more for each kill than their initial points value would suggest. My standard 1,000pt fleet carries an additional 350pts in Strategic Value, showing the true price of all that Devastating Ordnance and Ablative Armour. I try not to think about this too much - but it bears considering.

The new Aerial Battle Group alleviates some of these issues. Firstly, the Retribution-class Sky Fortress is a powerful piece of kit with a reasonable price tag - for not much more than a Nemesis-class Battle Cruiser you get strong Fore Guns, a pair of Rocket Batteries, two Bomb Bays (especially interesting on a model with a Kinetic Generator!) and a good Carrier capacity. Support Aircraft Squadrons bring more Activations, aerial cover to protect your ships from enemy bombers, and are great for hunting enemy Medium Surface vessels (with Dive Bombers) and rival Submarines (with Torpedo Bombers).

Defensively the Sky Fortress is similar to the Submarine, and would do well paired with a Battle Cruiser carrying a Guardian Generator and a Support Skimmer to grant it Sustained Fire on the Fore Guns. Eight Elite Crew make it reasonable in boarding actions, but I would not like to risk it unnecessarily. A fine addition and an excellent centrepiece for the fleet.

The Chimera-class Airships bring numbers to the compact fleet, the closest thing we have yet seen to a "normal" squadron for the Black Wolf Mercenaries. Packing a standard Rocket Battery and (Devastating, if not impressive) Fore Guns, the Chimera-class Airships are another vessel that will benefit from the Combat Co-ordinator of the Manticore-class Support Skimmer. Their Reckless crew are somewhat unusual, but will work well alongside the Fury-class Frigates as a potent boarding threat.

On paper, they do not look all that amazing, but I think with the right support and descending from the skies at the right time they will be a hell of a shock to your opponent. They do not carry Ablative Armour like their larger cousins but have an enhanced CR which will be useful, especially when covered by a Guardian Generator. Somewhat expensive, their Reckless crew and Devastating Fore Guns make them capable of some surprising results if you get lucky.

Lastly, the Wraith-class Airships are powerful little vessels that will cause a great deal of trouble if positioned correctly. Carrying two turrets that can link together on the broadside, a full squadron is capable of firing eighteen shots at close range, or even more if spread out and fired individually.

Aside from the shooting, the Wraith-class Airships each carry two Defensive Crew - not quite sure why they bothered to have two if they're only going to be Defensive. They have a higher CR value than usual, which will be annoying for the opposition, and are very fast, with a speed of 14". Two AA each is a nice bonus.

The boxset comes with five of these vessels, which would have made them even better. Unfortunately squadron size is limited to four. I look forward to using these - too many times I have been on the receiving end of a well-positioned squadron of Augusta-class Frigates, and want to try out linking all those turrets!


OTHER CHANGES TO THE BLACK WOLF MERCENARIES

The addition of the Aerial Battle Group brought some other updates to the fleet. Crucially, the Strategic Value of the Deathbringer-class Submarine changed from being Russian Coalition only to a straight 75pts. Hardly a deal breaker.

The Nemesis-class Battle Cruiser saw some improvements, gaining a point of Movement and losing 5pts from its cost - this will help with buying all those Guardian Generators I will need to help the rest of the fleet! The additional Movement is good, making the ship less reliant upon the Kinetic Generator.

The Fury-class Frigates gained a point of CC, and the Reaper-class Attack Submarines exchanged Pack Tactics for Directed Fire on their Torpedoes. Yay?

Overall these changes and new units have rounded the Black Wolf Mercenaries out nicely - no longer are they restricted to a small number of big Medium vessels like Battle Cruisers supported by a handful of Small vessels, but can boast a proper Medium squadron in the Chimera-class Airship, a heavily-armed carrier in the Retribution-class Sky Fortress, and some surprisingly nasty ordnance from the Wraith-class Airships.

One Aerial Battle Group totals 620pts, which will add to the 850pts-ish value of the Naval Battle Group nicely when building a 1,500pt fleet like I am. Additions after that? A second Submarine, more Fury-class Frigates to escort the Battle Cruisers and Support Skimmers, and maybe another Sky Fortress would all be solid additions for larger games - and this is without even thinking about other Mercenaries and Alliance Nations.

It is good to see the Black Company stand alone, and I look forward to trying them out properly in the coming weeks.