"In the weeks since the disastrous attack on Stavanger, the Russian Coalition had endeavoured to blockade the Byfjorden and scour every nook and cranny of the broken coastline, searching for signs of a secret port that could accommodate the grand Dreadnought Markgraf. Their largest vessels were held back to enforce the blockade or were commissioned away from the North Sea theatre, leaving packs of smaller vessels to reave the western coastline of Prussian-Scandinavia.

Chance encounters and skirmishes between opposing squadrons were common, but without the movement of massed fleets nothing would occur to rival the immense Battle of Stavanger or the Breakthrough at Byfjorden. The Russians held the line, while the Prussian Empire effected refits and licked their wounds. A period of relative calm settled over the Norwegian coastline, and the eyes of the world looked elsewhere.

In the wake of the Battle of Stavanger and the string of brutal losses that had preceded it, the Prussian fleet commander Karl-Ehrhart Grunner had had his requests for reinforcement intercepted or ignored and his attempts to break the deadlock thrown back. His best hunter, submarine commander Jürgen Grönemeyer, had not returned from the counter-attack at Kvitsøy, and he began to fear the Byfjorden theatre would be locked for the rest of the war. If he could just break the blockade, Prussian naval operations in the North Sea could resume at full effect - without the support of the Norwegian coastal ports, their operational range was severely limited.

In the last week of June, 1873, Grunner was presented an opportunity to upset the balance. A small column of Russian ships based around the assault carrier Ulyanovsk had broken formation and advanced beyond the protection of the blockade, gathering speed toward Stavanger once more. Ignoring the risks of this potential feint, Grunner gathered what frontline-worthy warships he could find and pounced - he lacked the patience for this siege, and would take any chance to score a blow against the Russian Juggernaut!

The price of Grunner's hubris would soon be discovered..."
- The Hunt for the Markgraf (cont.)
Naval Battles of 1873 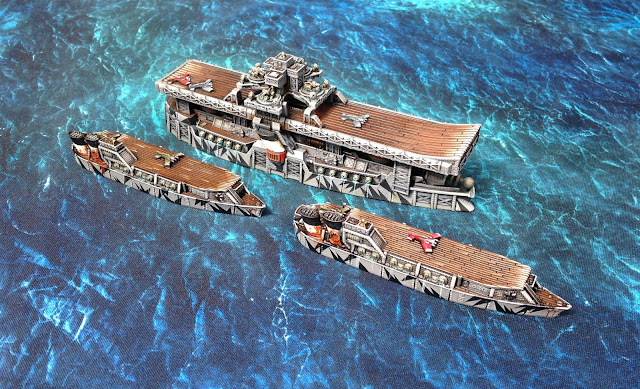 Welcome back to another Battle Report from Full Spectrum Dominance, and another chapter in the Hunt for the Markgraf. It has been quite a while since the last report, owing to "Real Life" issues getting in the way and other games distracting our attention. Nevertheless, we will always try to make time for Dystopian Wars!

As the campaign progresses, we see the Russian fleet blockade the Prussian port of Stavanger and halt Prussian operations down the Norwegian coastline. Their search for the Dreadnought Markgraf continues, and though the Prussians know to unleash the Dreadnought would break the blockade, it would also draw the attention of a much greater number of Russian ships, and drag them even deeper into the quagmire. In this battle, the Russians have detached a small force from their blockade, and the Prussians have leapt on the opportunity to cause some damage. Have they fallen for a Russian ploy?

This battle would give us a chance to use some of the new ships from the recently-released Bombardment Groups, and for the Russian Coalition I took the opportunity to try out a selection of new ships - Submarines, Heavy Frigates and an overall much smaller focus on Large vessels in favour of a swarm of Small and Medium squadrons. Many of these would be placed in a Flanking Force, following a conversation I had with Mike in the past about overcoming the short-range of the Pesets-class Submarines. We shall see how this works out!

THE SCENARIO
Given the time since our last game, we did not try anything too special with the Scenario, instead relying on the old-fashioned secretly drawn Objectives.  I decided that my Submarine group would be operating as a reserve flanking force, to try and get close with their powerful weaponry and act as a nasty surprise for Mike. Rolling for their arrival, I was rather dismayed to see they would appear on Turn Three.

Mike drew to destroy all of my Small squadrons and score 750 Victory Points, a task that looked easy at the start of the game given my flanking force was not present! In turn, the Russians would be forced to destroy or capture the enemy Commodore and score at least 750 Victory Points. This would be easier, given Mike had only chosen one Large vessel - although it was a mighty Elbe-class Fleet Carrier!

Another great game for the two fleets! Once again, the Russian Coalition have proven their might, though the Prussian Navy should not be written off - they did score more Victory Points overall, and only the Victory Conditions make this a Russian victory.

The new vessels performed admirably, and will hopefully appear again in future battles. The Russian Chany-class Strike Submarines were especially brutal, scoring three Critical Hits at long range on the Prussian Fleet Carrier alone, while their defences made them all but untouchable.

The Prussian Havel-class Light Carriers were no less impressive, their Tesla arrays causing several crucial blows to the ruined Russian fleet, while their supporting aircraft aided in picking off the stragglers. I would still like to see them run with a Donnerfaust-class Support Cruiser. The Stolz-class Destroyers were another squadron that have changed a great deal with the new updates, and did well considering their size - a full squadron (or pair of squadrons) would have caused even more chaos!

Overall a disappointing result for Mike and the Prussian Empire - with a different Secret Objective, he could have won the game very quickly as his tactics and dice rolling were well up to scratch. Comparatively the Russians had a very easy Objective, and though times were tough before the Flanking Force arrived, things went in their favour once the rest of the fleet was on the board. I imagine if those squadrons had arrived on Turn Two, it would have been a very different game!

Overall a messy affair, with a lot more Small squadrons on the table, something new with several new ships being tried out, and an unusual choice to have a large Flanking Force spring their trap late in the game. A win by technicality for the Russian Coalition, as they achieve their Objective, but lose on Victory Points and have their entire Battle Group destroyed!

In the future... what will the Prussians do to break the blockade? Will the Markgraf finally appear to turn back the Russian tide?

"...The Russians played their hand and destroyed several of Grunner's warships, including his immense Fleet Carrier, but at great cost. Battle Group Ulyanovsk was lost, taking with it a significant portion of the White Banner Northern Fleet's blockading strength. The port at Stavanger was now poorly defended, but if the Prussian Empire tried to reinforce the theatre and sent ships to the Byfjorden, the Russian fleet would struggle to hold them.

Both fleet commanders were running out of time and out of ships, and their was still no sign of the Markgraf. Russian spies drew closer to discovering the location with every passing day, while the Grunner's temptation to unveil the vessel, play his last trump card and smash the blockade aside grew as well. Whatever else happened, if the Markgraf was still near Stavanger, it would soon be revealed..."