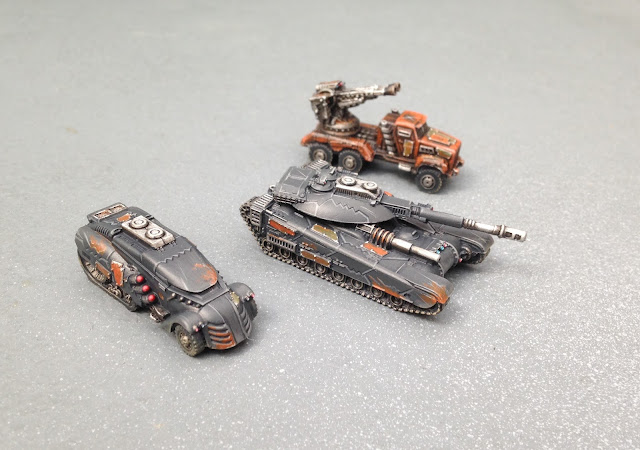 At time of writing I have only played a single game of Dropzone Commander, but I have caught the bug and invested in my first force - the Resistance, ready for my second big game next week. This game will be against my old foe Joe and his 1,000pts of United Colonies of Mankind. Quite a leap from an Intro Game using the two-player Starter Set! In readiness, I have been researching some good lists for the Resistance and been feversihly building and painting as many models as I could manage.

FIRST GAME
The first Intro Game used the small forces from the two-player Starter Box, with Joe using the United Colonies of Mankind while I ran the Scourge. It was quick six-turn affair, but with local Talon-in-training Simon running the game it was fun and easy. Big thank you to Simon for getting his models painted up so quick, and for sorting everything out in regards to Dropzone Commander at our local store. None of this would have happened without him - I hope he gets the Talon title!
Our two forces were tasked to secure three Objectives in the three largest buildings along the centre of the board, and it quickly descended into a brawl between the infantry forces within two of the buildings. Joe came out better, escaping the buildings with two of the Objectives as my troops fell back in disarray, but his infantry were severely reduced and by the end of the last turn I had nearly destroyed them all. The game ended with one Objective secured by a Sabre Main Battle Tank and another barely held by a lone, half-dead unit of Legionnaires, surrounded by Scourge Warriors. So close!

I lost, but the game was interesting and easy to play. It reminded me in many ways of Dystopian Wars, but simpler in many aspects. Perhaps I would have preferred to play more Dystopian Wars, but this was the game my local gaming group were getting into, and the models were excellent - excuse enough to collect a force.
BUILDING THE RESISTANCE AND FORMING THE ARMY
The first idea for the list was the initial Resistance Starter Set, which I would build up from. It included some AA, some tanks and a formation of infantry, with dropships and carriers. From there, the list would need an HQ choice and then some more exotic units.

Luckily for me, I found a great 1,000pt list on a Dropzone blog I've recently been reading - Orbital Bombardment.

This list was built around the Starter Set with the addition of only a few blisters - luckily I had sourced some unwanted miniatures from a friend and managed to build the force pretty quickly. After a couple of days building and detailing things like the infantry bases, the force was looking impressive!
To quote Orbital Bombardment:

"This is SkullSwords Resistance list, well rounded with good anti-tank and anti-air. Also has 4 units of troops.
The extra blisters needed are:

This comes to £115 including the £55 resin starter. A very reasonable price, and you get helicopters!! You also get 2 bases of Freeriders extra. You also need to know that you will need the main rulebook and Reconquest: Phase 1 to play the Resistance."

Not an unreasonable price for a 1,000pt army, especially when you consider the possible discounts you find from shops like Element Games or your local gaming store. I was especially fortunate to have a friend selling some of his models, so managed an even bigger discount.

Here are the different Battle Groups in this list:


PAINTING PROGRESS
I got into to his hobby for the models and the background, and though I was initially intimidated by the incredible detail and small size of the Dropzone models, these have proved to be a real pleasure. Painting was fast too - the three models shown here have taken roughly four hours to paint. At this rate I might have the entire force ready for the local tournament in late July!

Despite these early successes, I am still dreading the Lifthawks and the larger hovercraft. The windows of the Cyclones and Lifthawks will be a challenge, and though I love painting lenses and windows, I am still not sure what colour I would like to paint them in.

As with my Dystopian Wars fleets, I decided to paint a few different models before finishing off squadrons and detachments fully. Thus, we have one MT-90 Jackson APC, one M-9 Hannibal and one Gun Wagon finished, with the M-3 Alexander on the way.
So there we are, the current status of the Resistance force. Check back for an update on the painting and gaming in the near future, and the result of my first "Clash"-sized game!