"Summer, 1873 brought some small glimmer of heat to the bleak waters of the North Sea, but a wall of ice had formed across the Byfjorden. Not natural but man-made, erected by the immense Glacier Generators of the Russian Coalition, this immense edifice would trap the ships of the Imperial Bond and stop them from escaping into the North Sea.

For Baron Karl-Ehrhart Grunner, this was the tipping point. No longer would he waste lives and ships keeping the Russians at bay - he needed access to the wider oceans or his entire purpose was lost. If they wanted their lost Dreadnought Markgraf so badly, he would drive it into the ice wall himself!

Assembling the best warships left in his battered fleet and commandeering a Titan-class Troop Transport to carry an entire legion of Luftlancers directly into battle, Grunner ordered the Markgraf to be unleashed, revealed from its secret moorings and claimed as his flagship. They sailed for a narrow passage in the ice wall where a hastily gathered Russian fleet was assembling to intercept the immense Dreadnought. There would be a reckoning amid the ice, near the shores of Bru, and the Russians would finally have their chance to reclaim their lost Dreadnought. For Grunner, this was an incredible gamble - glorious victory and the breaking of the blockade, or a most humiliating defeat..."

- The Hunt for the Markgraf
Naval Battles of 1873 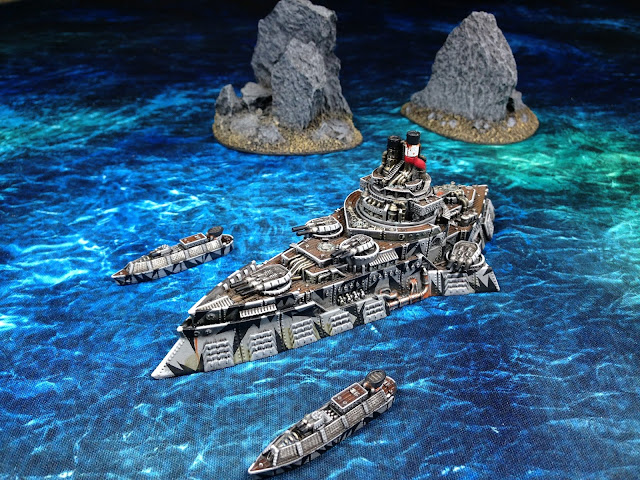 Welcome to another Battle Report from Full Spectrum Dominance, and yet another showing for the Russian Coalition and the Prussian Empire! You'd think they were my favourite fleets or something...

This week, Mike returns to the field of battle borrowing my Russian fleet as I unleash the Prussian Empire, including (for the first time on this blog) the immense Dreadnought Markgraf, the centrepiece of this entire narrative campaign.

After having their fleets smashed and port blockaded, the Prussian Empire have finally unveiled the captured Dreadnought and launched a massive attack on the Russian blockade, aiming to smash a hole through the ice and restart operations in the North Sea once more.

This would be the first battle for the Markgraf in many months, something special for the campaign. I think after so many games it was time for the Dreadnought to show itself, and win some victories for the beleaguered Prussian Empire!


The game was a 1,500pt affair, with some extra points for the Prussian Empire to pay for the Markgraf and a table slightly denser than usual, featuring lots of icebergs to represent the blockade the Russian Glacier Generators had erected. Rather than drawing Secret Objectives, it was decided that the Prussian fleet would have to score t least 1,050 Victory Points (70% of the Russian fleet value), and the Russians would (unsurprisingly) have to Capture or Destroy the Markgraf.

THE FLEETS
My Fleet
The Prussian Empire

As usual, a bloody mess of a game! A huge amount of Victory Points scored, two Magazine Explosions and several Prizes. All in a day's work for the Prussian Empire and Russian Coalition.

Mike played well, using the brutality of the Russian Coalition to his advantage in the early Turns. I was shocked to suffer so much damage on Turn One, and it was unpleasant to feel the wrath of the Chany-class Strike Submarines. It took a lot of effort to keep tabs on all the different squadrons and routes of attack the Russian Coalition were careering toward the Dreadnought, and frankly I am surprised it did not end up finishing in Mike's favour.

He poured a LOT of fire into the Dreadnought, and with two early critical hits on the gun decks, took it out of the game for the first two turns. Lucky for him! By the time it was repaired, it had suffered too much damage to cause a massive impact with shooting, but the Elite Crew (fully replenished thanks to the Titan-class Troop Transport) successfully defended it against the Borodino-class Battleship and wiped out the Dudinka-class Assault Carrier.

Taking the Titan-class Troop Transport was a nasty trick, but it kept the Dreadnought in the game. Over four Turns, twenty five points of AP were poured into the Markgraf, whether as part of boarding actions, replenishment from the Titan, or recapturing by the Hussar Gunship - ridiculous!

The Escorts were not much use, as I forgot how to position them or to include their AA. The turret Linking with the broadsides and small turrets was a bonus, however.

As the game progressed, Mike's early losses (especially the two Battle Cruisers in ONE Activation from the Saxony-class Corvettes) put him at a disadvantage, and in a similar manner to our last game, the sheer number of Prussian support aircraft allowed them to out-Activate and outmanoeuvre the Russians, surrounding them and dragging them down.

Ultimately, the Prussian Empire had enough ships to resist the hammer of the Russian fleet, and reacted with several sharp jabs that left them overwhelmed, surrounded and Prized. The Russians were fixated upon the Dreadnought, and though they did cause significant damage to the Prussian fleet, including the destruction of the Elbe-class Fleet Carrier, the Prussian air support gave them the edge to weather the storm and reply in turn.

Overall, a significant victory for the Prussian Empire - one the Russians will not soon forget!

"...Grunner and Grönemeyer's attack smashed the Russian blockade at Bru, and the ice soon retreated without their arcane technologies. The Markgraf, wounded and awash with the blood of dozens of sailors both Prussian and Russian, had finally, truly entered the War, and would lead the battered survivors of Stavanger out of the Byfjorden and into the North Sea. There, they would meet their reinforcements from the south and scour the Norwegian coastline of the Grand Coalition.

The Prussian Naval High Command had played their hand, gambling that the White Banner Northern Fleet was exhausted from their exertions in the North Sea and the Byfjorden. In that, they may have been correct, but the Russians were not alone..."