THE RESISTANCE ROLLS OUT THE TANKS! 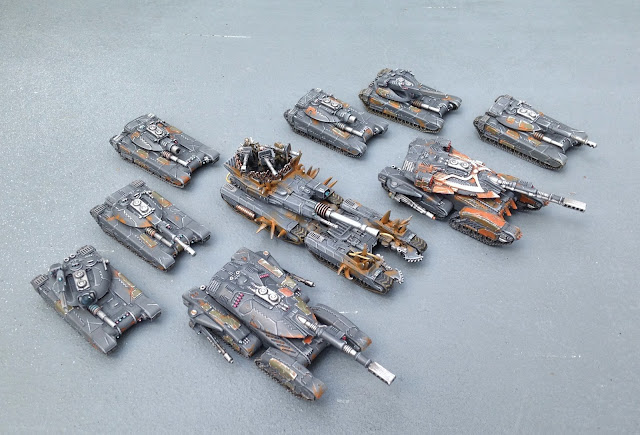 After the success of the converted Aegean Dropship and finishing Salakahn, Tyrant of Atlantia some weeks ago, I thought it was time to paint up some of my spare Hannibal Battle Tanks, and then add a new Commander to the Resistance. The obvious choice was the Broadsword Heavy Battle Tank of the UCM - converted and modified to suit the crazed minds of the Feral Resistance!
The conversion was simple - spikes, some chainsaw pieces on the front of the vehicle, a new weapon for the turret and then a mini-howdah on the back in the style of the Battle Buses, packing some machine guns and rockets. Rules-wise, this could count as the Chainguns and Grenade Launcher found on the Alexander, but mainly I did it to look cool. Just don't ask how it fits onto a Lifthawk!
Will I use this monster? Perhaps, especially if Hawk can make the Alexander a more tempting choice in the future. I am interested in playing some unusual Defender-Attacker scenarios soon, so perhaps it will appear there. Also, if I run Salakahn as my Commander I can field Alexanders as Heavy choices - running all three of my big tanks could be a lot of fun!