THE TEAM IS READY! 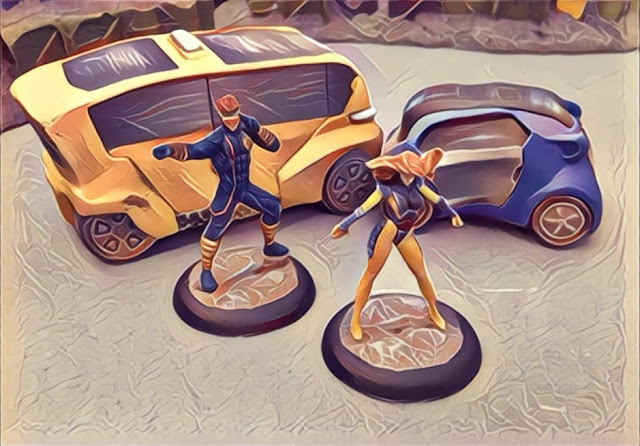 Last week I posted my first two completed models, and now, after a hard week of painting, I have finished the all nine members of my X-Men team for the Marvel Universe Miniatures Game. All of the currently released X-Men have been completed, and I am pretty happy with the results! Now all I need to do is get some games in.

PAINTING
Painting the team was a long process, as I had decided to do the majority of the base-coats and blocking in of primary colours simultaneously. Batch-painting nine models at once, when they are all different sculpts and colours, is a challenge! After the base colours were finished I resolve to finish a model or two at a time, starting with Colossus and Nightcrawler, followed by Jean Grey, Gambit, Cyclops, Wolverine, Rogue and Emma Frost before finishing with Deadpool.

This highly colourful team involved a lot of paints I had not used for a long time, and colours I am not particularly confident with. Bright, bold primary colours are hardly my forte, and I really struggled with the yellows and blues. Ultimately the decision to go extreme with the highlights saved me, as this was a far more forgiving style. On some of the models it has resulted in a little chalkiness and stark coldness to the scheme, but on others I am very happy - Gambit being my favourite, I feel.

The biggest problem with painting these models is holding myself to the standard of the Knight Models Studio team - as the models are based on fictional characters that everyone recognises, I felt I had to try and replicate their traditional scheme. In holding myself to a particular colour scheme, I am also constantly comparing myself to the Studio examples - not a great feeling!

For other systems like Infinity, Dropzone Commander or Warhammer 40,000, I have the freedom to invent my own scheme. This enables me to work to my strengths and concentrate on making the model look as good as I can - though it does tend to involve red and grey! This system, however, holds me to another standard, and one I cannot match. If I can come close enough to feel satisfied, all is well! Overall I do not believe these are my finest work, but they're just about as good as I can do in the time-frame I allowed myself. It was a challenge to paint some new colours, however, so I appreciate that!

GAMING
I've been reading the small rulebook that comes with the Starter Set a lot recently, and think I have a loose grasp of the rules. They are delightfully simple, but with scope for some incredible combinations and synergy between different characters. The X-Men are particularly good at this, as they are not dominated by a demi-God like Thor but made up of several models roughly the same cost - each bringing something to the table.

The local scene does not have a huge amount of Marvel players as they are currently distracted by the Batman game, but many of these guys have at least one Marvel Starter Set so hopefully I can convince them to give it a go! I think at least two guys have painted Guardians of the Galaxy teams, and I would love to give them a game on a fully-painted board. Battle Report anyone?

THE FUTURE
The day after I finished these nine models, Knight Models posted their July releases - the Brotherhood of Evil Mutants! Fantastic! Grabbing these models and having Emma Frost change sides dubiously will bring them up to 47pts, which is respectable, and enable me to play with some friends who have not gotten into the game just yet.

Looking over the models I see a lot to like, though Toad will probably need some work - I'm not a fan of that ruff, or that hair... perhaps a conversion is in order to look a little more threatening. Sabretooth, Pyro and Magneto are all fantastic looking models, and Lady Mastermind (not a character I am too familiar with) looks good too.

In the future I know I will be busy with Dropzone Commander Reconquest: Phase II and the release of Dropfleet Commander, but hopefully I have time to bash out these five models and get some games in. Long-term future? I hope Knight Models release a few more of my favourite characters - the X-Men are really missing Storm and Beast (Jubilee?) and the Brotherhood could do with Mystique, but that is something for after the summer. If the game gets off the ground and a few more people start playing, I am tempted to pick up a couple of terrain pieces to make my Infinity boards look a little more modern - TTCombat has a great range of buildings and vehicles for a low cost. The idea of Magneto throwing an ambulance at someone is too good to miss!