ADDING SOME BATTLE DAMAGE TO THE CITY 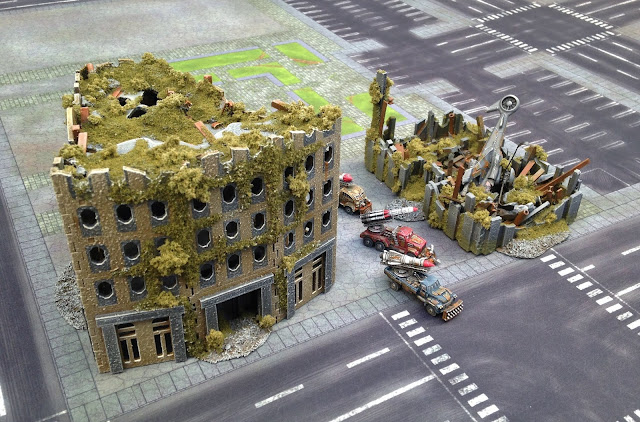 I realise everyone must be getting bored of my terrain updates by now, but trust me, we're nearly there!

In addition to the piles of Office Buildings and Residential Blocks, I acquired a pair of Blotz' damaged/ruined buildings to add something a little different. The detail of the damage is rather simplistic, so I spiced them up with some spare pieces of MDF, pieces of slate and sand from some old basing kits and a spare Typhoon Attack Helicopter!

The purpose of this was to make them appear more interesting and ultimately, more realistic. After painting the rust and broken masonry I went nuts with the overgrown plantlife, trying to match the look of a favourite piece of Dropzone artwork featuring a crashed and overgrown vehicle of (presumed) EAA origin. Piles of rubble piled around the edges of the building add something to really give the impression the buildings have been through a (small) war.

I spent a lot of time looking at pictures of abandoned cities, both real and imagined, to get an idea of what they would look like. Chernobyl was a particular influence, as it is relatively untouched by human hands, simply abandoned to nature. I realise I could have gone a lot heavier with the battle damage, or with the plantlife, but ultimately wanted them to look a little more whole.

In any case, in the future I intend to make several pieces of scatter terrain to add to the feel of the ruined and abandoned city - piles of scattered rubble, more abandoned vehicles, and perhaps some trees.
The final stage of the terrain project will be the elevated road system, which I hope will be fairly quick, and the additional scatter terrain. Not long to go!