THE ELEVATED ROAD SYSTEM IS CONSTRUCTED OVER THE RUINED CITY 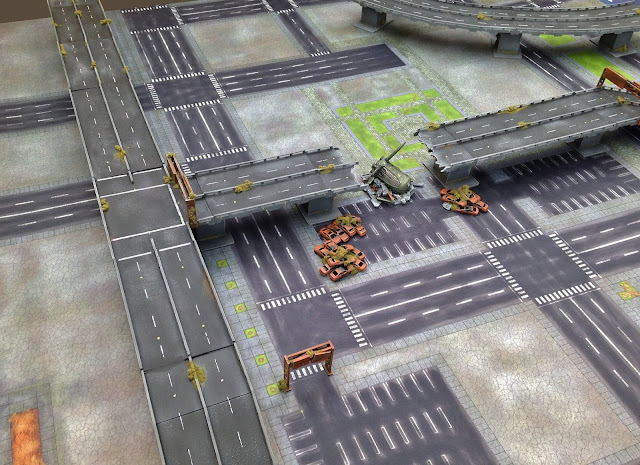 The last major project for the ruined city is finally complete - the Flyover! This massive elevated road system from Blotz Terrain is a massive construction, split into a large number of different modular pieces for easy set-up and variety. I picked up one of their modestly priced bundle deals, and added an extra Off-Ramp to give more options.

For the price, the amount of coverage this set gives is fantastic. Fully laid-out it covers the space of several major buildings, adding cover to the board and generally being a nuisance for the players as they seek to drop their troops into the warzone.

I painted it to match the colour of the roads on the mat, a really dark grey with white lines and stone-grey supports. Detail was added with rusted sections and patches of vegetation - this should match the rest of the terrain nicely. A selection of overhead signs and scatter terrain will also be placed onto the roads, but this is being kept separate for ease of transportation and potential use for other games at a slightly different scale or subject matter.

Of all the terrain pieces the elevated road system was probably one of the most boring, as it is large expanses of open road and almost featureless support struts. I am happy to have finished the set. Gaming-wise, I recently attended a tournament where the organiser had deployed some of these flyovers onto his boards - all three tables I played on, funnily enough! They are annoying in that they are slightly too small for a large LZ template, making Crazy Pilot Command Cards actually mean something! They are also a hassle for the Thunderstorm Custom to pass under, but with some careful placement they should not cause him too much trouble. My friend Adam had an issue where he had placed a model under the road and promptly forgot about it, missing out on using it for a crucial turn - whoops! From experience, they offer something new and different from the usual collection of square buildings, and should be used occasionally to give players something unconventional to deal with.

I love the idea of running a column of tanks down this road system, and playing some special scenario where they are harassed from the sky. Rules for destroying sections of the road and using the broken sections could also be considered - all the other terrain in Dropzone is destructible, so why not the roads?