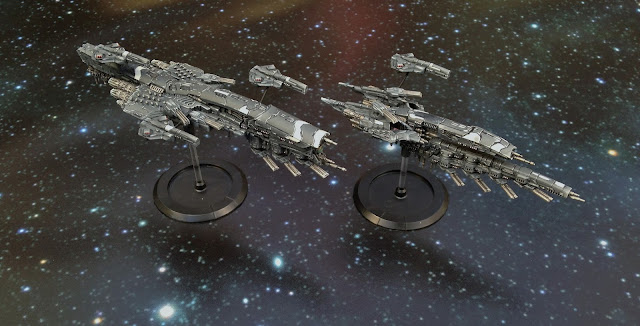 Okay, maybe just one Battleship, but with the magnetised turret options to run both a Tokyo-class and a Beijing-class. God forbid I ever play a game big enough to run both! This monster has taken most of the past week to finish, and the vessel alongside it, my second Atlantis-class Battle Cruiser, was comparatively simple.

Both of these vessels feature Fleet Tenders closely escorting them - this was an idea picked up from  the Halo capital ships by Spartan Games. I love the look of the huge Battleships closely escorted by flocks of smaller ships, and after seeing a Corvette variant in the Dropfleet Facebook group, I was inspired to build up a few and add them to my larger vessels (I felt they were a little small to operate alone).

The overall look is a far busier fleet, a huge collection of vessels swarming around the capital ships rather than a scattering of solitary squadrons. I am not intending to go crazy with this in the future, and will be limiting the amount of "extra" ships to the last few, important vessels. Hopefully you guys like the effect as much as I do though!

Full credit to the guy who came up with this design for the smaller vessels - I can't find your name on the Facebook group as I've lost track of the original post! I will edit if I come across it in the future.

On to the pictures!