TWO NEW MODELS FOR FROSTGRAVE AND THE THAW OF THE LICH LORD BEGINS! 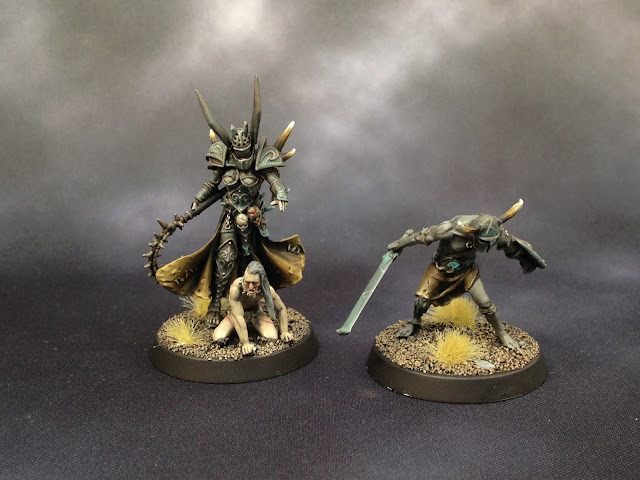 The warband of Damrahl the Soul-Thief continues their domination of the Frozen City, and following some recent losses they are joined by two new members - a new Templar and a Thug. These models are from Confrontation by Rackham like the others - an Apostate of Darkness and a Drune infantryman. The slave on the base of the Apostate was taken from a Dark Elf slaver by Raging Heroes - a lovely model that really adds to the disturbing, creeping horror displayed throughout the warband.

Game Eight - The Eclipse
The first game of the new campaign thread, Thaw of the Lich Lord, saw four of the battle-hardened and weary warbands converge in an unexplored section of the ruins, ready to witness the mysterious Eclipse from the best possible vantage point. Facing the Wildmen were the Easterners and their red-clad Enchanter under Matt, Jack and his Roman-themed force, and Ethan with his barbaric Witch-led crew.

In the diminishing light there was little threat from long-range spells or missile fire. Nonetheless, Ethan and Matt exchanged shots and caused disruption for one another, while the northmen drew treasure to them and quickly rushed it off the board. A combination of Reveal Secret and Telekinesis saw my warband secure four pieces of treasure in time for the Eclipse, relatively unscathed. These were carried away by the Marksmen, the Thug and a risen zombie-servant, who would be of little use in the low light.

As the light began to return, the warbands finally began to clash. On the right flank my Infantryman and the Apprentice held off an attack from part of Ethan's force, injuring their Barbarian and killing the enemy Apprentice with a well-placed Bone Dart. The Infantryman was cut down, but the Apprentice evaded her vengeful pursuers.

On the other flank the Chieftain led a bold attack into the Easterners, thrown forward with a Leap. His rampage saw the enemy Captain and a Treasure Hunter cut down, while the Soul-Thief plunged his blade into an injured enemy at close quarters. The rest of the Easterners withdrew quickly, covering their movement with enchanted Grenades and Bone Darts, as well as a hail of well-placed arrow fire. My Treasure Hunter, Barbarian and Templar were felled in short order by this barrage - the Barbarian would not survive.

In the closing moments of the battle, the Chieftain was assailed with arrows from all directions, magical bolts and blasts of necromantic energy. Finally, with sickening slowness he was brought down. He would survive the battle, but the battered remnants of the Enchanter's party cheered as they laid low the monstrous Chieftain.

A bloody day for the warband! Four pieces of treasure were recovered, netting me over six hundred gold and three new Grimoires - Control Undead, Embed Enchantment and Plague of Insects. The Chieftain earned another scattering of experience - I had decided to learn Sprint last game to assist with surprise attacks. The Wizard, having cast a bucketload of spells, witnessed the Eclipse, claimed four pieces of treasure and taken out two enemiespersonally, earned enough experience for five more levels! Level 32.

Lessons learned? The Chieftain, once he has all of his bonuses stacked, is a monster! But he is not invulnerable. Hopefully Plague of Insects and Enchant Armour will give him an even better chance in future combats. I invested in Control Undead because Thaw of the Lich Lord will (hopefully) involve a large number of Undead creatures, and also purchased a magical bow for one of my Marksmen because I want them to be able to threaten incorporeal creatures and also be WSIWYG. The rest of the money I will save for another magical bow in the future and Robes of Arrow Turning for the Captain.