BEN SHOWS OFF ANOTHER TEAM 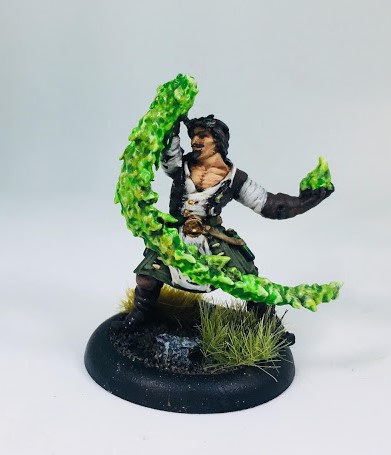 Ben here back with another Guild Ball update. In the last post I posted my finished Brewers team, this time I have my new Alchemist team... well, the first half of the team.


Alchemists were an odd one for me, for some reason I thought I didn't like the models, really don't know why, and dismissed them as a team I'd never buy. Then I was down the local store Entoyment and I was browsing as always, Pete has so much stuff in his store it's easy to spend a few hours lost in there. Anyway I started looking at the back of the original six Alchemist box and it stuck me that the renders were really nice! I mean really really nice! So nice I bought the whole team there and then and spent the evening building the team (building the team was less nice.... man I love plastic models....).
For colour scheme I based it off the box, but with a few twists of my own. The green is a favourite colour of mine, Vallejo's Reflective Green. The colour really suits my style and it's really easy, a quick black wash, re-coat Reflective Green and then add Vallejo Buff for the highlights.
For the off white I used two paints from the GW range that have become staples since my return to painting, Rakarth Flesh and Pallid Wych Flesh. After a final highlight of white this makes a lovely off white.
One thing I wanted to do with this team was keep the number of colours limtied, so to this end a lot of the stand out colours are the same. The vials and the flames are all done using the same greens, I feel this works as while it's another green on an already green model, it is a very bright green to contrast with the more matt green of the uniform.
I have only got one game in so far against one of the local player Kendall's Blacksmith's in a winning effort. The most important thing I got from the game was that the team was really fun to play throwing out fire and poison templates and Midas is a goal scoring machine! Also the team plays very differently from my Farmers and Brewers playing a far more control and scoring based game over combat focus of the other two.
While Brewers were my first love, Alchemist are rapidly catching them and dare I say might surpass them soon as my go-to team?
I have started the second box having so far painted four of the players (need to finishing basing them but I ran out of tufts....).  Just the two big guys Veteran Katylyst and Compound to go which I hope to finish before the end of March.
After I finish the Alchemists next up for Guild Ball will be the Rat Catchers which are out the end of April. Before that I have a couple of other projects which I will talk about next time.

Until then, thanks for reading and it's been emotional.