Welcome to the latest Battle Report from Full Spectrum Dominance! It has been a while... a very busy summer, compounded with issues at work, holidays and the distraction of Infinity has meant a bit of a slowing down on the Dystopian Wars front. Hopefully not permanent! Another exhibition match is planned for next week, so that should be a treat before the end of the month. 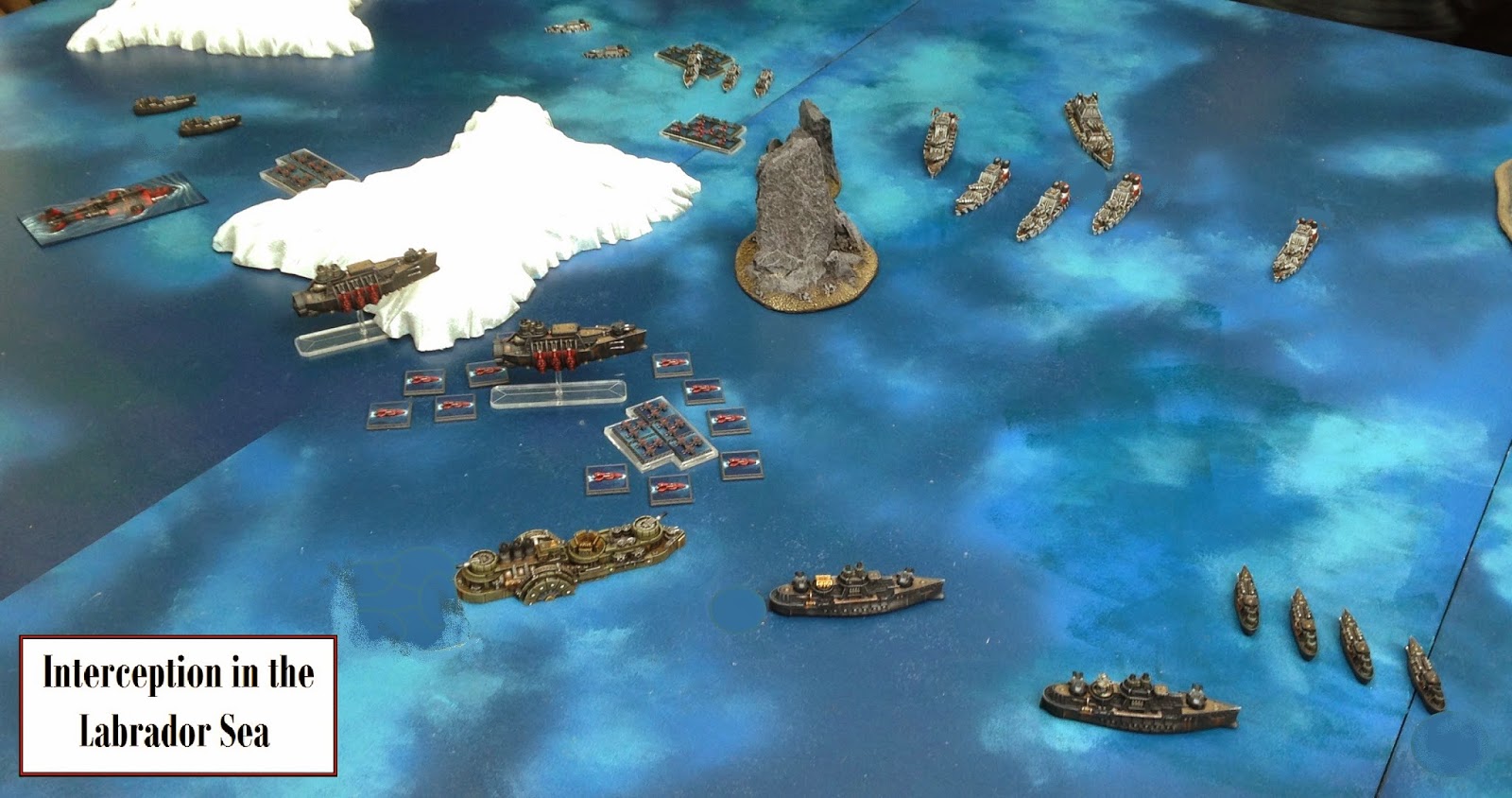 In this match, Mike and myself decided to play an 1150pt match (though I only ended up running 1075pts), with him using his Prussian Empire while I ran a fleet I have not tried with the Second Edition of Dystopian Wars, the Black Wolf Mercenaries.

The board was set at 6x4", with a selection of icebergs on one flank, a rock formation in the centre and a pair of islands on the other side. Some small jetties were placed on the islands to break them up a bit. It looked as those most of the action would happen between the islands and the icebergs, though there was room for a few squadrons to engage between the ice floes.

Secretly drawing Objectives, Mike drew Break Their Backs! meaning he would have to Destroy or Capture all of my Medium vessels, as well as scoring at least 50% of my MFV in Victory Points. In turn I drew Vital Asset Destruction, which meant I would have to Destroy or Capture his Emperor-class Battleship, as well as achieving the same Victory Point conditions. I felt at this point I had the easier job.

One Nemesis-class Battle Cruiser with Guardian Generator - the Contemptor

One Careful Owner...
One Liberty-class Heavy Battleship with Rocket Battery - the Liberated

One Emperor-class Battleship - the Hetzer

TURN ONE
Turn One saw both fleets close, their firepower stymied by the range and the Dilation Field generated by the Deathshroud. Nonetheless, the Prussians had lost several of the Gunships, and had not caused a huge amount of damage in return.

Turn Two saw both fleets engaging fully at point-blank range, their Tesla and Kinetic Generators enabling them to close at great speed. The Prussians had lost five of their Gunships, a massive blow, but in turn they had caused deep damage to almost all of the Black Company vessels. A well-timed coup de grace would finish them in short order, while the Prussians still had two almost fully operational capital ships and a Destroyet squadron in the second wave

ENDGAME
The Black Company scored a grand total of 945 Victory Points and achieved their Objective, destroying the Emperor-class Battleship. In turn, the Prussian Empire also achieved their Objective, destroying all of the Medium vessels just before the loss of the Emperor, and scored 893 Victory Points. With such a close game, and both Objectives being completed within one Activation of each other, the game was judged a DRAW. Not exactly the glorious victory I was hoping for, but an excellent performance by Mike and the Prussian Empire!

CONCLUSIONS AND LEARNING POINTS
Mike's deployment of the Gunships, and the sheer number of Gunships he took, was intimidating. With two turrets, Tesla Generators, 5 Hull Points and Close Gunnery, the Hussar is a real star of the Prussian fleet. They took almost my entire fleet to bring down, leaving his Small squadrons and, crucially, the Battleship protected.

The Black Company have not lost their edge, but poor placement of the Death Bringer-class Submarine meant they were subtly outmatched in the main battle and struggled once the Ablative Armour was knocked down.

Boarding was important in this game, accounting for two of the lost Medium vessels on the Black Company side. Mike played well to the Prussian strengths, where I was more cautious. Having only one ship in each squadron makes me play cagey with my Boarding, as I fear the counter-attack.

I should have placed the Frigates in better positions for Boarding, perhaps where their guns could benefit from the Manticore Combat Co-Ordinator as well.

Putting the Submarine in the centre would have made achieving my Objective a lot easier, as I could have smashed through the wall of Gunships a lot quicker!

They do not, however, feel as powerful (overpowered?) as they once were, and for that I am grateful.

The Liberty-class Battleship was not used in the most efficient way, and could probably use a Shield Generator rather than rockets. Keeping it in better shape would have allowed those powerful turrets to have more of an impact individually, rather than having to Link and only target one enemy ship at a time.

Mike did not rate the Konigsberg in this game, but this may have been down to bad placement more than anything. It is certainly more survivable than before, with 6 Hull Points, but compared to the Hussar-class Gunships was fairly ineffective.

Overall, another fun game, and another great testament to the Second Edition of Dystopian Wars. I look forward to a future game with me running the Prussians, as they have a LOT of cool toys and tricks in this edition, even when using older models.

THE NARRATIVE
"...the Covenant of Antarctica had kept their secrets safe for now, and the ocean between Greenland and Iceland was no longer safe for Prussian and Danish shipping. What were they doing? Already stretched, the Prussian Empire could ill afford to invest more ships and troops investigating this new threat. Nonetheless, the question of what would happen if they left them unchallenged loomed in all of their minds..."