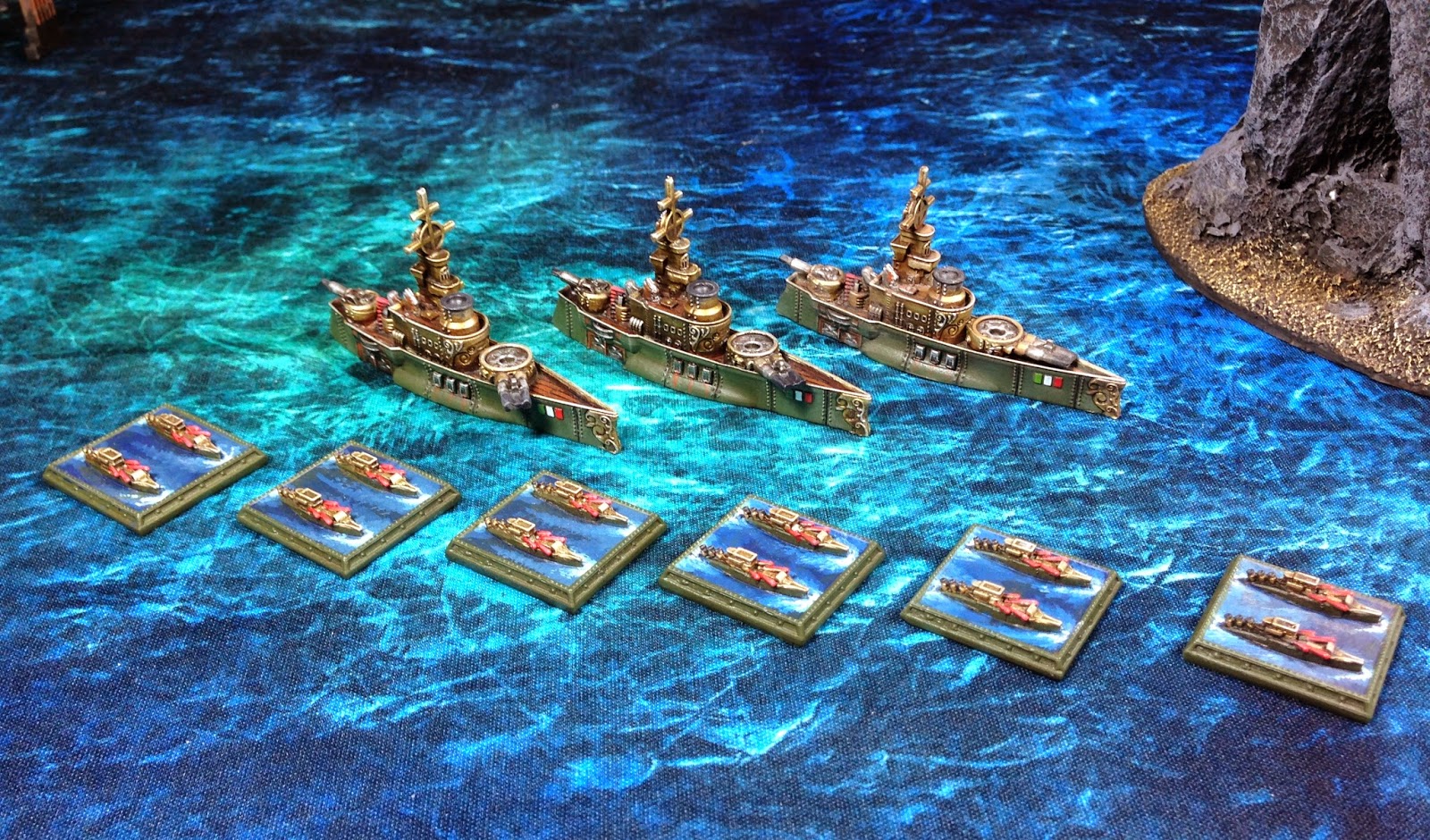 Before they could reach the Strait, they encountered several pirate vessels apparently operating under their own volition. Suspecting ties to the Imperial Bond, especially with the presence of an Italian Hunter Fleet, Whiston ordered the reconnaissance elements of his fleet to track them, and eventually found a small base amid a series of small islands off Banda Aceh. Seeing it as a personal duty to rid the area of such rogues, the order was given to attack..."
- The Cauldron: War in the South China Sea
Naval Battles of 1872
Welcome to yet another Battle Report for Full Spectrum Dominance, and another pair of new fleets playing Second Edition - the Commonwealth of Free Australia and the League of Italian States. Since the release of the new edition, I have attempted to use as many different Nations as possible, and with this AAR (number fourteen for those counting, and fifth since the new edition was released), I have used almost  all of my painted forces at least once. Only the Honourable Eclipse Company to go! In the future I will hopefully get a chance to show off the Russians, French, Ottoman Empire and Indian Raj, plus whatever else I may have decided to add to the collection... depending on how fast I can get them painted!

This week, Good Friend Ben returns to the arena with his powerful Federated States of America, featuring some freshly painted reinforcements - the heavily armed Annapolis-class Battle Cruiser and the seriously impressive San Francisco-class Assault Carrier. Against him, I have chosen to use my Italian fleet for the first time in many, many months, as I am very impressed with their new statistics. Continuing the piratical theme, I have allied them with a selection of Free Australians, tying in with the Pacific-themed campaign Ben and I have been playing, and also allowing me to tick off another fleet to run in Second from my collection. 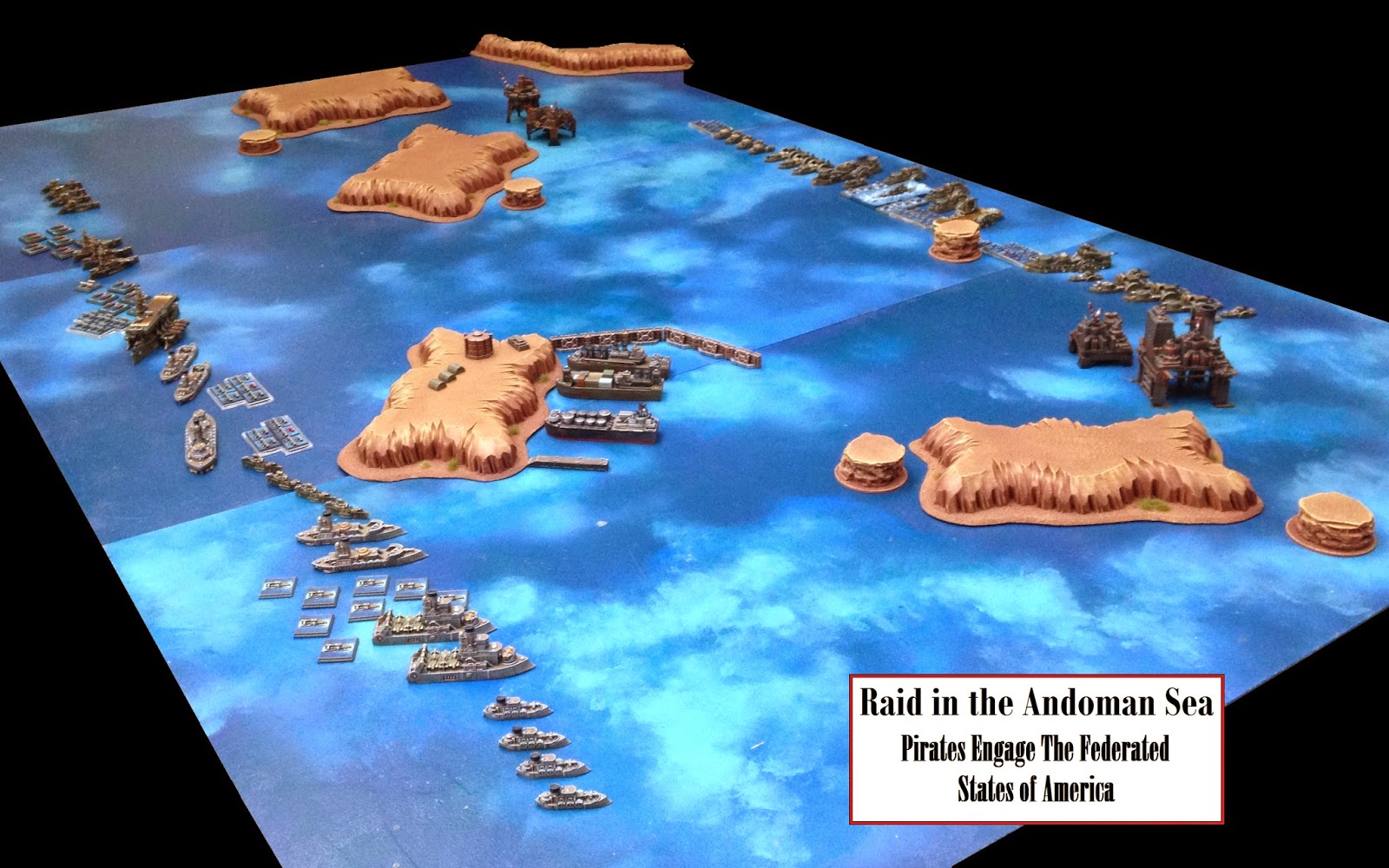 Running 1500pts on a 6"x4" table, we can see below the terrain is formed of scattered desert islands, with two small platforms to add a human element, and a small dock or smugglers station in the centre, with three large Merchant tankers moored. Featuring a wide open deployment zone on one side and three points of access on the other, it should be wide open game that will use almost the entire board.

Picking secret Field Objectives, Ben drew Break Their Backs! and would have to Destroy or Capture all of my Medium vessels, quite a difficult achievement given my fleet structure. In turn, I would have to destroy all of his Small vessels. Not difficult given he only chose two squadrons, but if he worked out my Order too early he could quite easily hide his ships and deny me any chance of winning.

With this in mind, we went onto the game!

THE FLEETS
My Fleet
Commonwealth of Free Australia

One Affondatore-class Battle Carrier accompanied by six Uccisore-class Assault Craft, one squadron of five Fighter Planes and one Recon Plane


One Liberty-class Heavy Battleship with a rocket battery, accompanied by one Springfield-class Escort and upgraded with Elite Crew
One San Francisco-class Assault Carrier with Shield Generator, with one Recon Plane and one squadron of five Dive Bombers, led by an Ace Pilot
One Boston-class Attack Submarine accompanied by six Turtle-class Assault Submarines

AFTERMATH
In the end, the piratical alliance had scored 1210 Victory Points and destroyed all of the Small vessels, which was their stated Field Objective. The Federated States of America only (!) scored 945 Victory Points, and failed in their mission to smash my Medium squadrons - something Ben would have achieved had he hunted down the Submarine-Tenders! A hard-fought game, one made difficult for Ben because of the mission.

CONCLUSIONS AND LEARNING POINTS
Ben enjoyed using his new ships a great deal, especially the Devastating Ordnance on the Fore Guns of the Boston and the San Francisco. The Disruption Generator with the Node Projector was another cool trick that he used to crippled the defences of the Italian ships. Thoroughly impressed with the Submarine, his next game involves taking two of these beasts!

In turn, I found the Italian fleet to be incredibly potent, and this was without even using their Hit & Run abilities to their full potential. In a future game I would love to use a full 1500pts worth of League vessels, though this will involve painting a few more ships. On a table with lots of small islands, the shenanigans could be very annoying for my opponent!

The Free Australians, as I have always found, suit my playstyle well and being able to sit back allowed them to distract the American fleet with Monitors while the Bounty and the other supporting elements of the fleet did their stuff.

The mission was a difficult one for the American fleet, though I do not know if the result would have been any different if we had simply played till one of us lost 70% of our respective fleet. The Australians and the Italians complement each other well, and have some incredibly potent long and short range firepower, on reasonably well-built hulls.

Ben says he was not impressed with the Liberty, and feels a Shield Generator may be the best option to give it some staying power while trundling forward and getting stuck in. The Rocket Battery is just not powerful enough to justify the ship sitting at the back, and the loss of the protection offered by a Shield Generator (3) is difficult to ignore.

He was, however, impressed with the Lexingtons, especially the incredible speed put out by the squadron equipped with Kinetic Generators. They will no doubt be making another appearance!

So there we are, another valiant loss for Ben but a fun game and a lot learned, for myself with the new fleets in the new Edition, and for Ben with his new favourite ships - the Boston and the San Francisco.

THE NARRATIVE
"...as the Chinese Federation committed further resources into the South China Sea and attacked the island chains to the south, the Federated States of America were unable to assist their allies. The damage suffered by the 56th Reserve Fleet and the loss of the 47th were blows they had not planned to suffer and could not endure, especially given the need for ships and weaponry in the south Pacific. The rogue Italian Hunter Fleet and the Australian Mercenaries still roamed the Andaman Sea, and their movements began to attract suspicion - were they operating autonomously, or were mysterious benefactors, as yet unseen in the South China Sea, involved? Coalition spies found no connection to the Chinese Federation, and the possibility of something beyond Chinese aggression lurking in the waters was not something the Grand Coalition could afford to ignore..."