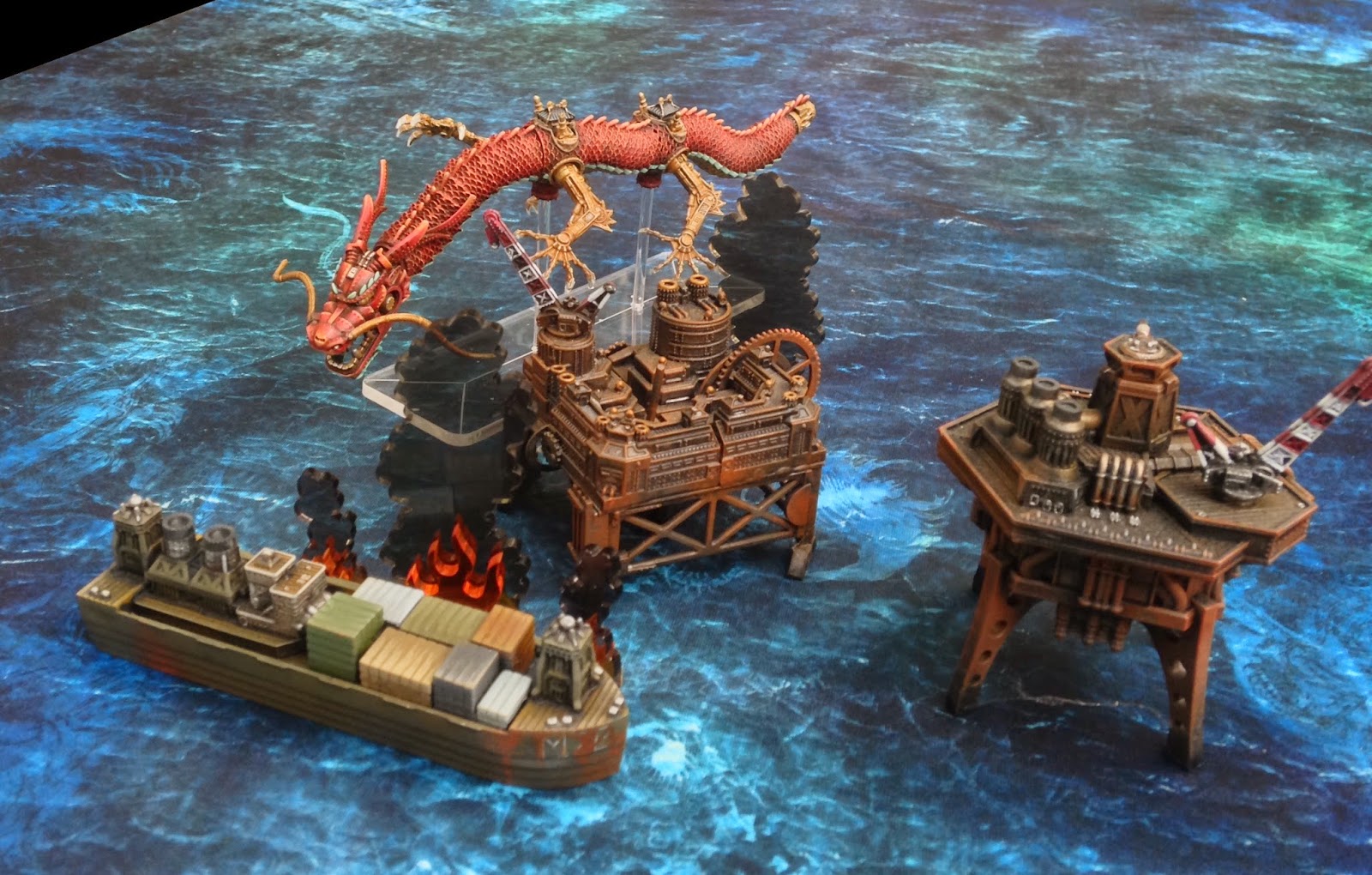 Welcome to another Battle Report from Full Spectrum Dominance, another chance to showcase the Indian Raj and also another game for the Chinese Federation and their brand new Armoured Dragon Robot!
With the recent additions to the Chinese fleet, Good Friend Ben was asked to take the new Dragon. He did not have a problem with this, as you can imagine. Back in command, he will be bringing 1,500pts of Chinese to the table, against my alliance of Indian and Australian vessels.

The board was set in a similar manner to the last battle at Pulau Tioman, with several desert islands and derricks scattered across the board. One side of the board was dominated by a dormant volcano with a gun platform in the centre, while the rest of the board was fairly open.

Drawing our Objectives secretly. Ben was charged with destroying the Large opposition vessels, potentially difficult given there were three of them. In turn, my fleets had to target the Small squadrons of the Chinese Federation; not a difficult prospect given there were only two of them. It was important not to let Ben discover my target too quickly, or he would hide his squadrons and make it impossible for me to win.

Onto the game itself... 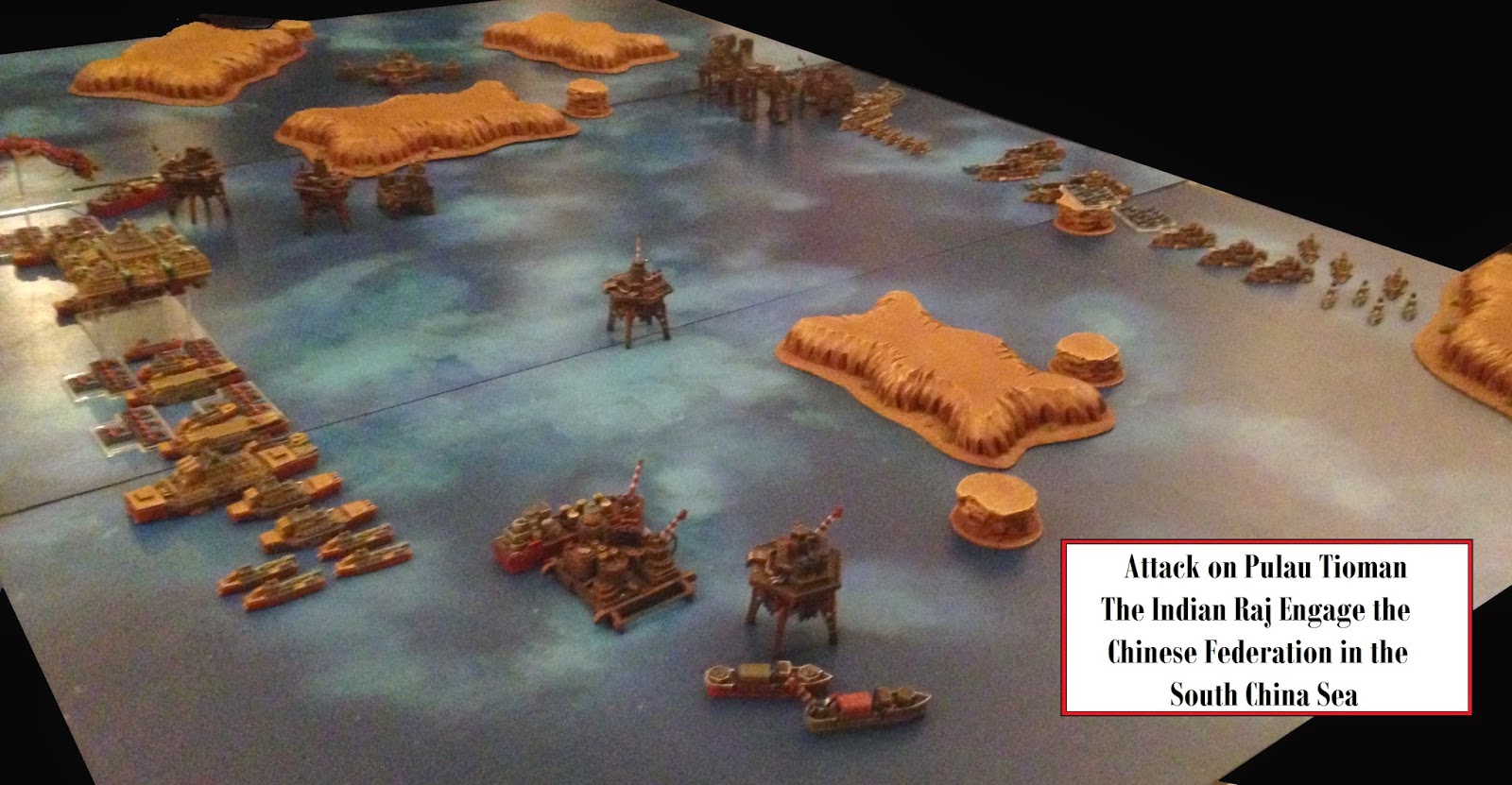 Indian Raj
One Chanura-class Heavy Battleship with Shield Generator
One Jhasa-class Assault Carrier with Howitzer-Bombard, one squadron of five Dive Bombers and one Reconnaissance Plane

The Indian Raj and Australian allies were also concentrated in the centre, with the Australians holding the flanks while the Monitors and Large Indian vessels sat in the centre, ready to rain fire upon the largest Chinese vessels. The squadron of Protector-class Frigates prepared to take a longer route around one of the islands, to sweep around the back of the Chinese fleet.

AFTERMATH
Ben and the Chinese Federation achieved their Objective and managed to score an impressive 1,038 Victory Points. In turn, the Grand Coalition had managed to achieve their Objective as well, but scored 1,230 Victory Points. With a difference of 192 Victory Points, it was judged to be a Minor Victory for the Indian Raj and their allies! Both fleets were shattered, but the Strategic Value of so many Chinese carriers and the mighty Dreadnought-Fortress gave the Grand Coalition the edge.

CONCLUSIONS AND LEARNING POINTS
THE NARRATIVE
"...the second battle at Pulau Tioman was considered a disaster by both sides, a huge loss of resources that would deny any chance of decisive victory for either side in the coming months. The Zhenwei Fleet was broken, their support craft lost and only the grand Battleship Henghai surviving relatively undamaged, while the Indian Raj and their allies had suffered severe losses, not least the two Battleships and Assault Carrier that led the attack. With concerned, yet opportunistic eyes, the East India Merchant Company considered their next options..."