THE PRE-CHRISTMAS HOLIDAYS ARE OVER... WHAT HAVE SPARTAN GAMES BEEN UP TO WITH DYSTOPIAN WARS WHILE I WAS AWAY?
The Polish-Lithuanian Commonwealth were one of the first Alliance Nations to make an appearance in Dystopian Wars, and have maintained their position as one of the most popular sub-factions with their Aerial Cadre and substantial Armoured forces. With flamethrowers, powerful Boarding potential and one of the best looking Aerial carriers in the game, they have intrigued me for a long time. 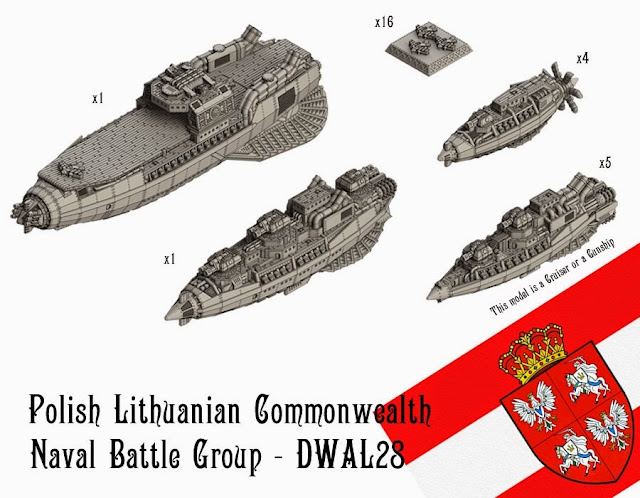 Coming this December, we see the release of a Naval Battle Group, comprised entirely of skimming vessels. Featuring a powerful Assault Carrier, Battleship, two Gunships, three Cruisers and four Heavy Destroyers, this box will give the Polish-Lithuanian Commonwealth something to do below the clouds, and when the two boxes are combined, they will be able to field a huge selection of vessels over the open sea. These new skimming vessels bring the Grand Coalition an entire fleet with the Surface Skimmer rule, and look to be armed with broadsides and turrets - though I hope some flamethrowers have made it aboard too! 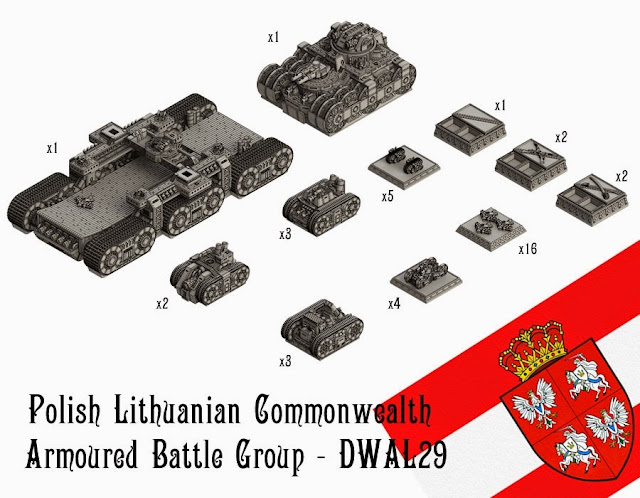 An Armoured Battle Group has also been created, featuring some of the original Armoured tanks and vehicles created when they were originally released. These are bolstered with Infantry stands and some new beasts. I particularly like the carrier.
Looking back at some of the older vessels, the Zamiec-class Sky Fortress is a wonderful creation, and luckily I already own one! It was part of a lot bought off a friend when he sold his Russian fleet, and I was more than happy to take it off his hands. I was originally planning to pick up one of the Aerial Cadres when I had painted a sizable Russian fleet to act as their aerial support. Somehow I get the feeling I may have to pick up the Naval ships as well...
Perhaps I can talk a friend into picking them up instead, and can scratch that itch without adding yet more models to my stretched carry cases. Regardless of any future plans, the Polish-Lithuanian Commonwealth have entered the ranks of the bulked-up Alliance Nations, alongside the Chinese Federation. An exciting release for me considering I was planning to get back to work on my Russian fleet, and one I will have to consider a great deal. Of course, if the Kingdom of Denmark make an appearance before the New Year I will be changing my plans once more!