AAR - The Indian Raj and Royal Australians versus The Prussian Empire

"In the Autumn of 1873, the Imperial Bond had renewed their pursuit of Grand Coalition shipping with vigour, seeking to ambush and destroy those convoys daring to travel close to the expanding ice sheets around Greenland and Iceland. The Prussian Empire and their Danish allies were especially active, operating from their bases in Greenland with impunity as the Americans struggled in the Pacific and the Kingdom of Britannia tried to hold their grip on North Africa.

Increasingly stretched despite the size of their Royal Navy, the Kingdom of Britannia drew upon allies from the colonies - the Indian Raj and the loyal Australian navies were ordered to send reserve fleets halfway across the world to help defend their convoys and give the Britannian Battle Fleets the freedom to engage in active warfare instead of escort duty.

New ships and new commanders brought fresh eyes to the brutal Atlantic theatre. Seeing the strength of the Prussian Navy around Greenland and the Federated States' disastrous attempt to attack them directly at Holsteinsborg, Admiral Sardarilal M. Dhowan formed a plan for an ambush, luring the Prussian Wolf Packs out with the promise of barely-defended merchant shipping. Using strange new technologies, he would hide his fleet and launch a bold counter-attack when the Prussians made their move.

The plan was as bold as it was obvious, but Dhowan was confident that the Prussians, who had not faced the Indian Raj on open water before, would be unprepared for their new tricks. He played his hand  just off Newfoundland, leading the fleet himself from the flagship Marutagana..."
- New Eyes, New Enemies - Exploits of the Indian Raj in the North Atlantic
Naval Battles of 1873 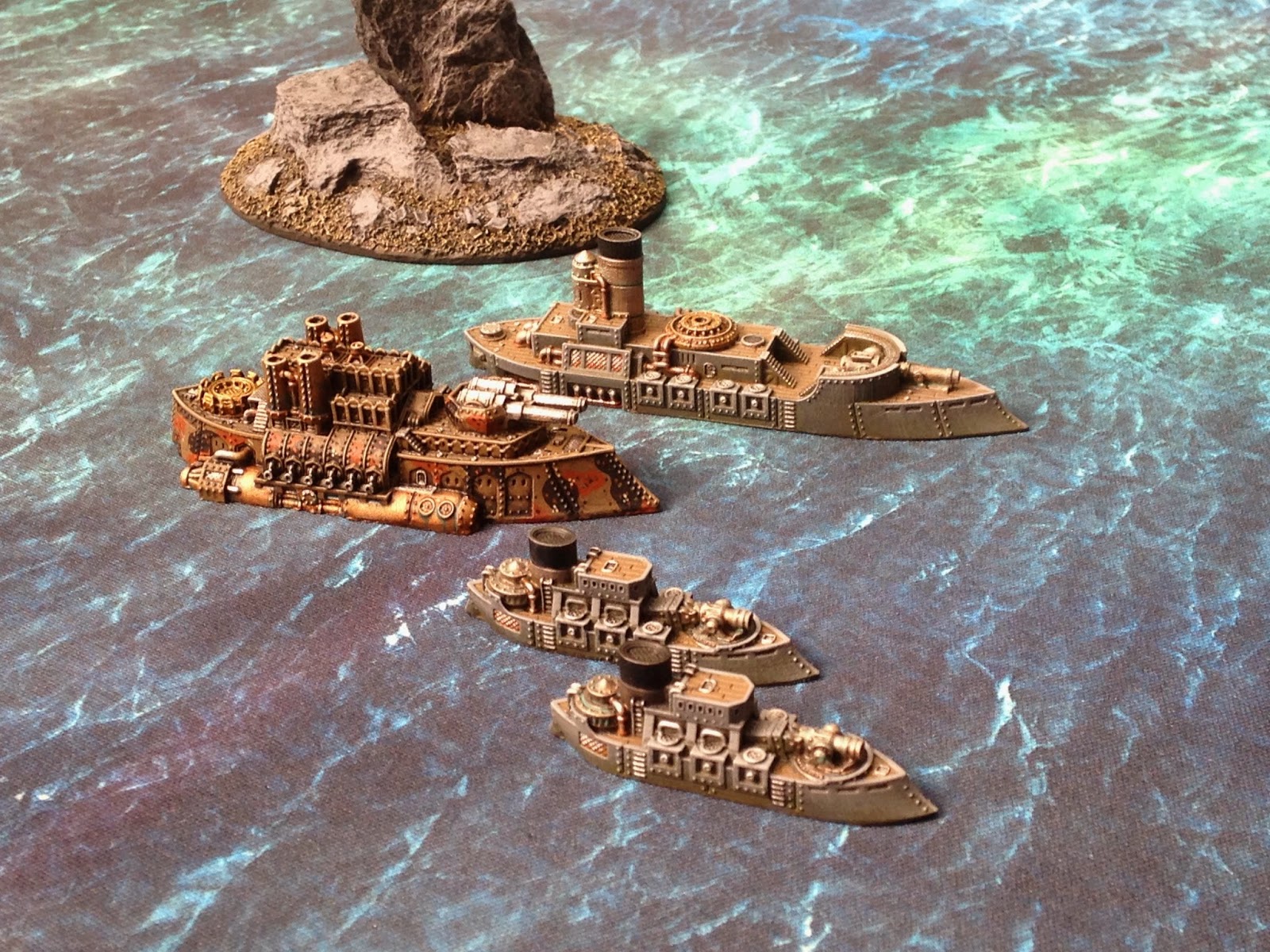 Welcome back to another Battle Report from Full Spectrum Dominance! It has been far too long, and I apologise. Various excuses can be offered, but I think you would prefer to hear that I am intending to get back into gaming a bit more will be posting some more reports in the coming weeks, rather than months.

This week, the Indian Raj get their first game, and some recent commission work also makes an appearance - my old foe Mike will be bringing his newly painted Kaiser-Karl Heavy Battleship and Elbe-class Fleet Carrier against the recently finished Indian Naval Battle Group (with a few allies thrown in). Never one to miss an opportunity, he is also borrowing my Kaiser-Karl for an intimidating pair of king-ships.

Given the fleets chosen I decided it would be a return to the North Atlantic, as the Grand Coalition and specifically the Kingdom of Britannia (their colonies, at least) lure a Prussian fleet into attacking a small convoy. The Indian Raj would appear with their Time-Flow Generators to spring the ambush. To tell this story on the board, I deployed a collection of merchant vessels in the Grand Coalition deployment zone. They would not move or act in the game, and would effectively work as another piece of terrain. The rest of the board was fairly sparse, with a couple of rocky outcrops to represent a strait where the Prussian attack on the convoy would make sense.

Drawing secret Field Orders, the Prussian Empire were given carte blanche to choose their Objective. Mike secretly decided to target the Medium-sized vessels, reasoning that the Indian Raj and Australians might hide their Large vessels at the back and make it difficult to destroy them. In turn, I drew the card to destroy or Capture 70% of the opposing fleet value - in this game, that would 1,050 Victory Points. A simple task, I would think.

With the terrain set up, and the Field Objectives drawn, we moved onto the main event!

One Chanura-class Heavy Battleship with Time-Flow Generator - the Marutagana
One Jhasa-class Assault Carrier with Howitzer-Bombard, one squadron of five Dive Bombers and one Reconnaissance Plane

One Squadrons of five Dive Bombers

THE AFTERMATH
With their fine Prizes, the Grand Coalition had scored a total of 1,600 Victory Points (not including the Arminius-class Frigates, as they cannot be Prized I remembered later). They had achieved their Field Objective and smashed the Prussian Empire. In turn, Mike had failed his mission to destroy all of my Medium vessels as one Canda-class Monitor was still floating, but had scored a total of 1,175 Victory Points - still a very impressive score in a 1,500pt game!

Mike has an incredibly aggressive and potent fleet, and was only really out-done by the potent Boarding power of the Indian Raj and the strength of the Howitzer-Bombards taking down the Hussar Gunships in Turn Two. Had his first Battleship not suffered a Generators Offline result in Turn One, it would have been far harder to finish that beast and would have continued to cause trouble. Equally however, both the Canda-class Monitors and the Chanura-class Monitor failing to do any damage in the first turn was bad luck.

THE NARRATIVE
"... Battle Group Katari was successful in their mission, smashing the Prussian fleet off Newfoundland and protecting their convoy from their predations. Despite their own losses, the destruction of the two king-ships - the Kreigshund at the bottom of the Labrador Sea and the Feuertrager scuttled off St. Anthony, was a mighty victory. These were blows the Prussian naval forces would suffer for in the coming months of the war - and would not soon forget..."