AAR - The Russian Coalition and Royal Australians versus The Prussian Empire

"The month of January saw the Russian Navy continue their attacks down the Norwegian coastline, searching for the lost Dreadnought Dzerzhinsky, now known as the Markgraf. Following their victory at the Lofoten Listening Station and the capture of several important Prussian scientists who had been involved in the Markgraf project, the hunters moved down past Bergen towards Stavanger. last known port of the great Dreadnought.

En-route, the Russian fleet was joined by more ships from the Kingdom of Britannia, a small flotilla of older vessels that would assist them in navigating the southern reaches of the Norwegian Sea. Their numbers bolstered, the Russian fleet commander plotted a course for the island of Utsira and its small port - there they would wrest control of the dockyards and arrange for refits and repairs, ready to move on Stavanger.

Their course was spotted and reported to the Prussian Naval Command, who immediately ordered one of their Wolf Packs to travel north to defend the port. There, they were joined by two mighty Metzgers from the knightly households of Prussian-Scandinavia, ready to defend their sovereign territory from the Russian invaders.

Battle would be met in the port itself..." 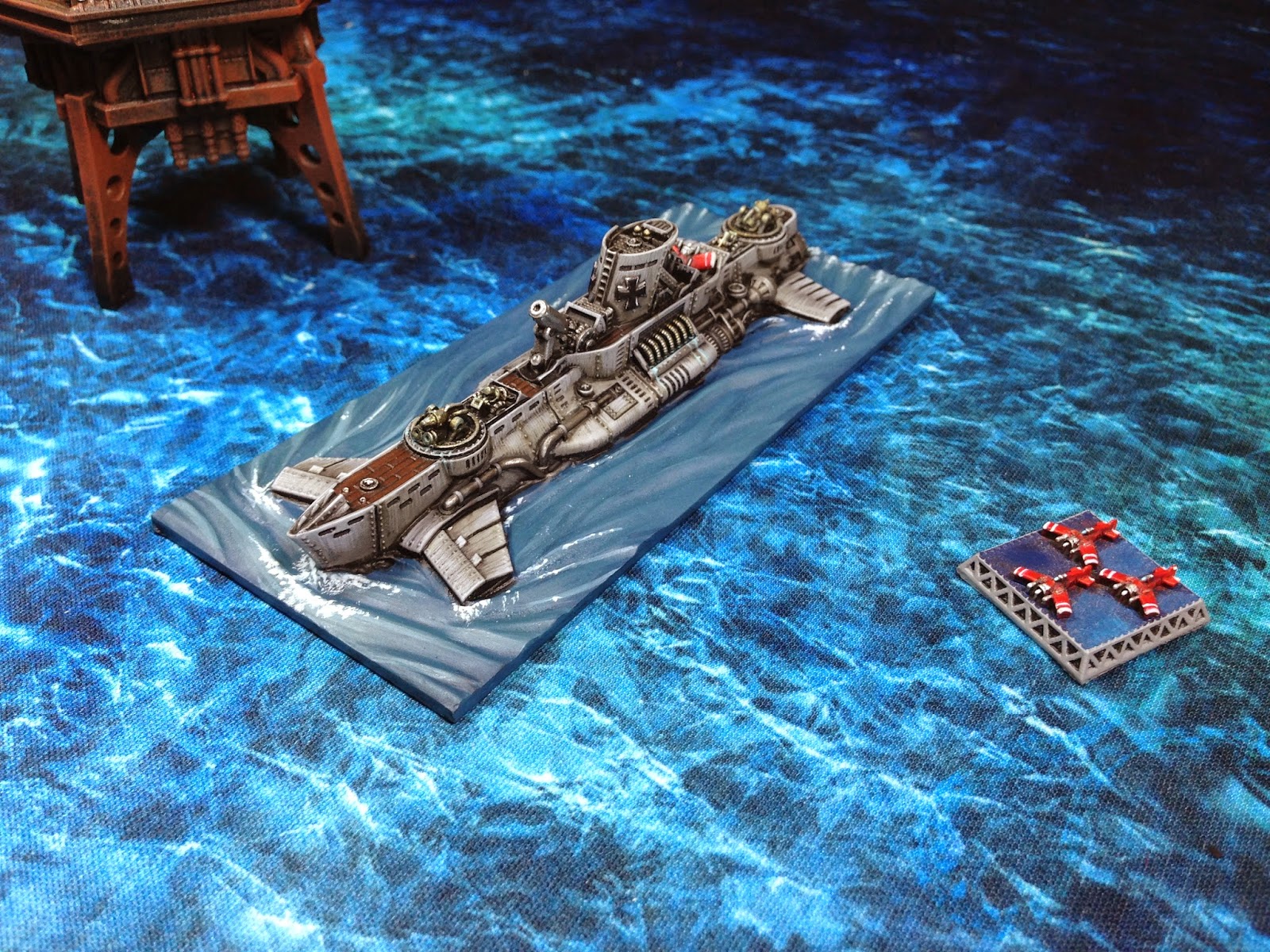 Welcome to another Battle Report for Full Spectrum Dominance, and the second official game of the Hunt for the Markgraf. In the last game, the Russian Navy had began working down the Norwegian Sea in their hunt for the Dreadnought, and smashed the Prussian fleet that had sailed out to intercept them. This week, something slightly different as the board would be set with a massive port in the centre. This dense terrain would force a different style of play, very close and personal - playing to strengths of both our fleets.

For this game, my small collection of Russian ships was supplemented with 450pts worth of Royal Australians, allies from the Kingdom of Britannia to aid them in their pursuit of the rogue Dreadnought.

Drawing Secret Objectives, Mike would have to destroy all of the Medium vessels in the Russian fleet, while I would just have to take out 70% of the Prussian fleet - probably the easier of the two Objectives.

TURN THREE
Editors note - at this point the game should have ended as I (George) had achieved my Objective, but we decided to keep playing and finish one more turn

TURN FOUR
AFTERMATH
The game ended there, with the Russian Coalition scoring an impressive 1,548 Victory Points and achieving their Objective. Mike scored 733 Victory Points but did not achieve Objective, resulting in a RUSSIAN VICTORY.

CONCLUSIONS AND LEARNING POINTS
As usual, a brutal game! Once again, the Russian Coalition has scored a solid victory - obviously they are still immensely powerful in Second Edition.

The Dudinka-class Assault Carrier is an absolute beast, especially in combination with a Battle Cruiser and supporting Corvettes or Destroyers. I cannot imagine swapping it for the larger but less heavily armed Fleet Carrier in the future, despite the relatively weak Carrier capacity.

In turn, the Borodino-class Battleship has not had the chance to impress unless targeting a single enemy vessel. This feels like a bit of a waste of such a powerful ship.

The rest of the fleet performed admirably, and I am loathe to swap anything out when thinking about expanding the fleet. Gunships instead of Cruisers is an obvious choice, but beyond that I do not know - probably a second Battleship for larger games.

Ablative Armour saved me on at least four occasions during this game - Mike was one point off scoring a hit or a critical hit so many times he was cursing it loudly.

The Prussian fleet felt somewhat outmatched, perhaps due to the terrain and placement of certain squadrons. The Metzgers blocked the channel where their support could not shoot properly, and perhaps more gunnery-based ships like the Sturmbringer or a squadron of Hussar-class Gunships would have worked better. As it was, the Robots were simply too slow to get into optimum range and were both destroyed before they could close and get their metallic hands on the Russian ships.

The Donnerfaust-class Support Cruisers were great, even in only a squadron of two. The Prussian Navy has a really impressive selection of Medium vessels at the moment!

Overall a good game for the Russian Coalition, and a disappointing performance for the Prussian Empire. Their massed Tesla weaponry just did not have enough punch to damage the Russian fleet, and layout of the terrain split the fleet so they were forced to work in smaller numbers than needed - maybe next time the Prussians will have more open waters to work in, and be able to support each other properly.

THE NARRATIVE
"The Russian fleet smashed through the defences of Utsira and scattered the defending Prussian fleet, their Wolf Pack more suited to attacking convoys in open water than holding an island-port from a well-armed and armoured enemy battle fleet. Nonetheless, they had suffered even more damage taking the port, and would need longer refitting and repairing than initially expected.

This was doubly dangerous - their prey had time to escape... or could attack them at anchor, with all the support they could muster in the Norwegian Sea..."