AAR Battle Patrol - The Russian Coalition versus The Prussian Empire

"In the wake of their disastrous run past the Jutland peninsula, the Russian Coalition were forced to push back their attack on Bremerhaven and regroup. The Petrushka was integral to their plan, and the recovery of the hulk became their top priority. Fortunately, the Kalmar Navy had been similarly forced to withdraw - Battle Group Adglek had suffered significant damage, and could not face a second wave of Russian squadrons.

Dragged from the depths of the ocean, the Petrushka rose once more. Repairs would take several days, and it was the duty of the White Navy to defend the repair vessels as they frantically pieced the Dreadnought-Robot back together. Aerial support from the long-range squadrons from the Polish-Lithuanian Commonwealth held back the Prussian attack from the sky, while patrols of White Navy vessels tried to intercept any Imperial Bond attack..."
The Hunt for the Markgraf (cont.)
Naval Battles of 1874 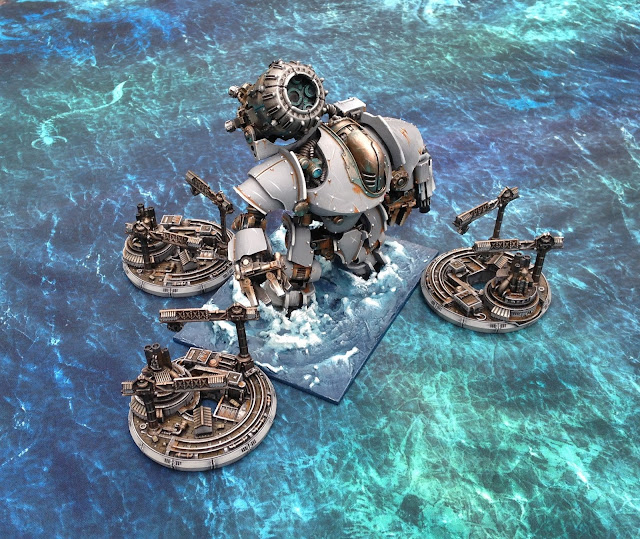 Welcome to another Battle Report from Full Spectrum Dominance, but this time something a little different - trying out the Battle Patrol rules from Spartan Forum's member Samlish. Spartan's own smaller/faster system Fleet Action is on the way, but I thought this deserved to be tried out first!

It also gives me a little more time to concentrate on Dropzone Commander for an upcoming tournament this weekend... but keep that quiet...

Copied over from the Spartan Forums, here is Samlish's great ruleset -

"Out here at the edge of the world, there are no armadas, no grand fleets and certainly no support. Out here, when the enemy comes knocking, you hit him hard and fast. You don't know from one day to the next if today will be your last day, so when that klaxon rings and you're told to get to your battlestations, you'd better get there and mean it."

Battle Patrol is a designed to represent the smaller battles in the world of Dystopian Wars. These alternative rules are intended as a fan-made supplement to the Dystopian Wars 2.0 core rules, and is in no way affiliated with Spartan Games.

Battle Patrol is designed specifically for the naval engagements of Dystopian Wars. Play on a battlefield of any shape or size, up to a maximum of 4' square. Terrain is encouraged, and need not be pretty or representative. The scenario is designed for spontaneous games, so use your imagination if you haven't access to proper terrain pieces. A napkin can become an island, a coffee mug a tall outcrop of rock. When space and terrain are not limited, I recommend playing on a 3' square, and with as much and varied terrain as possible.

Fleet composition is as normal, with the following adjustments:
TAC Deck:

Many players ignore the TAC rules. Battle Patrol aims to make them more interactive and to act as a balancing force. Disregard the normal TAC card selection rules, and use these instead.
Victory Conditions:

The victory conditions in Battle Patrol are designed to make for a fast paced and brutal game. The victor is declared as soon as the condition has been fulfilled and the game ends immediately. It's all or nothing. You are eliminated when:

With this in mind, I had the idea for the games to be fought around the ruined hulk of the Petrushka. Destroyed in the last game, I did not want this to be the end for my war engine, and immediately started painting up some Rudnitksy-class Repair Cruisers. This mission would focus around two small patrols engaging one another around the hulk of the Dreadnought-Robot. Can the Prussian Empire halt the recovery of the colossal robot, or will the Russian Coalition drag their monster from the deep and repair in time for the next engagement?


SKIRMISH IN THE SKAGERRAK
The Prussian Empire patrol encounters Russian ships amid the debris field - what are they searching for, and can they be stopped?


IN THE SHADOW OF THE COLOSSUS
Locating the site of the Petrushka, the Prussian Empire dispatch a force of Battlecruisers to disrupt the recovery and repair. They meet a force of similar strength defending the site

(Editor's note - we realised some time later that the Russians has technically won this as they had reduced the Prussian fleet to 50% first - oops! Guess the Russian Coalition did not suffer quite as much embarrassment as first thought!)

SNEAK ATTACK
The Russian forces around the hulk of the Petrushka are badly disrupted, and divert more forces to defend the wreck. Unable to commit to a full-strength naval action but with the intention of causing as much carnage as possible, the Prussian Empire dispatch a small force of reavers to the recovery site

AFTERMATH, CONCLUSIONS AND LEARNING POINTS
The Russian Coalition have suffered a series of blows in these skirmishes, and the Prussian Empire proven their might once more!

An afternoon of Battle Patrol games was something a bit different, and a lot of fun. The use of TAC cards was something we have not done before, and the adjusted system used here was simple and easy. Playing till the Commodore was Prized or half the ships were destroyed made for some seriously tense games!

Ultimately we can't take it too seriously, but the Prussians certainly felt in control of all three games. This is as much down to their advantages in speed, firepower and boarding as much as Mike's playstyle - he always commits hard in the early stages, where I play a longer game to secure the win by the end of the turn - something that cannot be done in these Instant Death-style games.

It might be unfair to write off the Russians - after all, losing the card to save my Commodore (before the game even started) in the third game cost me everything, and I technically won the Battle Cruiser-off in the second match.

If we do this again, I think I will be running the Tiksi-class Support Cruiser (I did not run it in these games because it was not available at the time), as the Area Bombardment of the Heavy Mortars would have put serious hurt on the Saxony-class Corvettes and stopped them from causing me so much trouble. I would also be playing a bit more aggressively, while keeping my Commodore back. The Russians struggle somewhat against the Prussians in these missions, outmatched in speed and gunnery while equaled in boarding potential (Wrath of the Hussars is brutal in these small games!), though perhaps I am not thinking about properly and need to consider some different options.

The Prussians looked like they had it easy. The Saxony-class Corvettes were a terror - anything that fast, packing ordnance and strong boarding potential is going to cause a lot of trouble. Mike played well, targeting the Commodore as a priority and taking advantage of my hesitance to commit and my errors in splitting the fleets or failing to block approaches for his boarding vessels. By contrast, I played far too defensively with the Kazimov-class Corvettes, and their lack of gunnery makes them look much worse in comparison.

Overall, three fun and tense games! I look forward to getting my Russians back to a proper-sized game and serving up some ice-cold revenge!

"The skirmishes around the wreck of the Petrushka caused significant disruption for the Russian Coalition, but ultimately they could not hold back the tide of White Navy vessels pouring down towards Bremerhaven. The attack would come soon, and though still sluggish, battered from the damage inflicted by the Danish fleet, the Petrushka would lead the charge on the walls.

Baron Grunner was faced with a choice - hide in his fastness and pray the Russian fleet broke itself on the walls, or sally forth and catch them in open water. Either way, the Markgraf would face the Russian guns once more, perhaps for the last time..."