WINNER DAVE ATTENDS HIS FIRST SAGA TOURNAMENT
I've just come back from the tournament that I've been preparing for... well, painting for! Time for some blogging therapy.

So good news is that I got the Warlord done in time, he was super enjoyable to paint and actually really quick. I did have a small nightmare when I got some basing gel on his shoulder and didn't notice until varnish time.  The tartan is meant to be Henderson, which my wife has familial ties to. 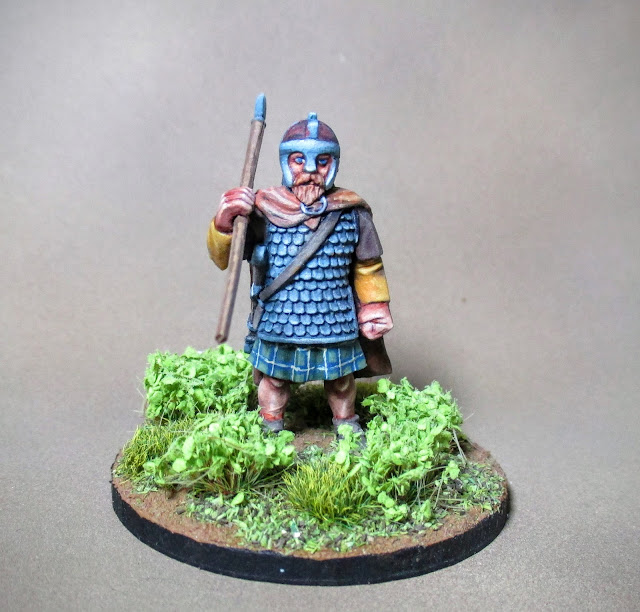 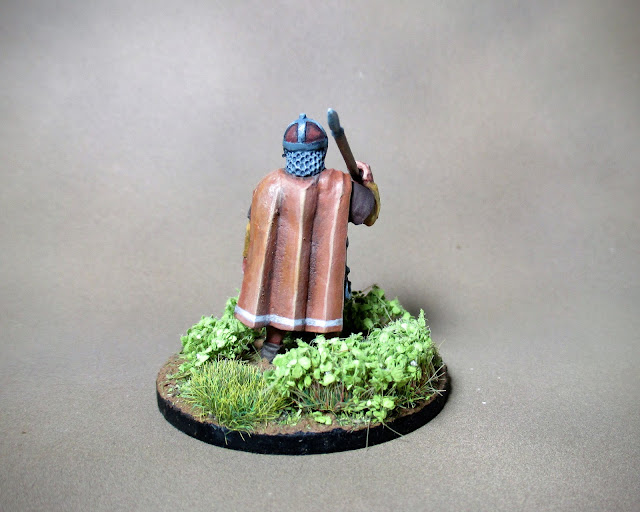 Unfortunately I didn't take photos of the games, which is a shame, but I doubt I'll ever remember to do that.

Here's a run down of the tournament, which to re-cap was doubles 4pts per player. I'd partnered the guy who'd given me my first ever game.  I was obviously playing Scots and my partner was Irish, so we were the Celtic Connection.

Game One: vs Vikings and Normans - Clash of Warlords
The first game with my new Scottish army. I did not play as defensively as I should have, I couldn't help myself and wanted to get stuck in! I didn't see what happened, but somehow my partner's ten-strong Hearthguard unit had gotten mashed by an eight-strong warrior unit...what?  How that happened I don't know, but something happened later on in Game Two, which I think gives me a clue.
Next thing you know my partner's Irish are on the far left flank tucked into a nice corn field and my Warrior unit shielding my Warlord are under attack from a nasty looking eight-strong Viking Hearthguard unit.  They loaded up the abilities to remove fatigue, re-roll missed attacks and immediately have a second round of combat. I used the defensive abilities I had and had this been a 6pt one-on-one this could have been great for me. The double combat saw my Warriors die and my Warlord exposed to a surgical strike from the Norman's cavalry charge, which they did and my Battle Board was empty... so he died and we lost that game.

At one point I made an big rules mistake, when I let my opponent announce all his melee abilities and then declared "runaway" then something clicked and I realised it only applied to Levy, so we had to rewind and I apologised profusely... hey it was my first game and no harm was done.

This was the best game of the tournament for me, my opponents were awesome chaps, they played a bit defensively and it paid off.  I thought they would go on to win the tournament.

Game Two: vs Vikings and Anglo Danes - Sacred Ground
YES! We were stoked that the mission was Sacred Ground, we knew we could stomp this mission home and we did.  Our opponents had taken lots of four-man units to keep their Saga dice up, which I thought was not a good strategy.  I actually attacked at one point to make things more interesting, which was foolhardy, I should have used Reach, but I couldn't roll Stags (6's for non-Saga players) for love nor money.

It was during this game I overheard my partner counting his dice for an attack with his ten-strong Hearthguard unit and realised he was only counting one dice per guy...I don't know for sure but I think that's what went wrong in Game One. I think this happened because he favours the ranged attack and tends to avoid getting stuck into melee. At least I noticed at this early stage.

One loss, one win

Game Three: vs Vikings and Anglo Danes - Crossing at the Ford
This was against some long-term adversaries from Flames of War, these guys are used to stomping all over me... but sorry guys Saga's a different game and still relatively new to us all! Plan was for me to hold the Vikings at one crossing, whilst my partner's big Hearthguard unit punched over the other side. My Viking opponent sent an eight-man Hearthguard unit across the ford to attack my Warriors in something very reminiscent to Game One. I'd learned a little about how to use the defensive abilities and this time remembered to trade in four attack dice for two defence dice. I upped that with Hold the Ground used of Wood and Steel to get a tonne of dice. The end of that combat saw three Warriors left standing and two Viking Hearthguard...YESSSSS, that's Scottish power right there! In my turn my Levy and Warriors with Reach managed to javelin the remaining Hearthguard to death and with that the Viking player was on the defensive. The Anglo Dane player kept then using Intimidation (cancels an activation) to prevent me from moving too much. I'd kept my end of the plan up though and held the Vikings back.  Meanwhile my partner had been using javelins to make progress and then in a massive charge managed to punch across. Superb.

At this point, the tournament split into two mini-leagues and we'd just done enough (on count back) to get into the semi-finals, so we had everything to play for.

A break for hotdogs and tea...yummy! Oh and to vote for best painted... shine boys shine! 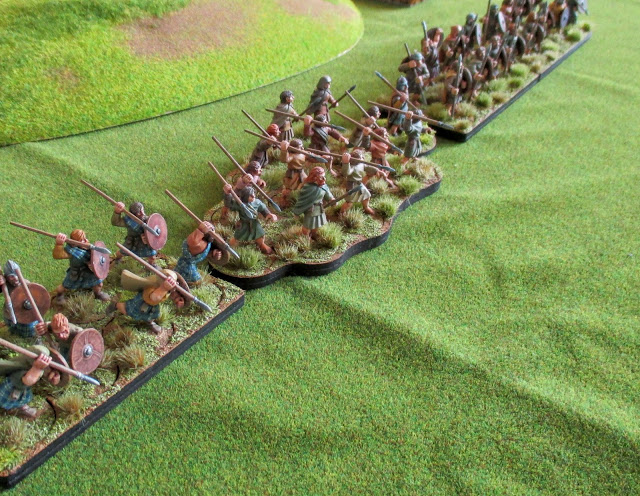 Game Four: vs Normans and Welsh - Champions of God
I was really surprised that our opponents had done as well as they had, the Norman player had only played one game before and the Welsh player, didn't play often. They had established that they could sit back and do nothing and come out on top as they were above us in the overall points department. Fine, play like that if you must!

This game was a little frustrating, I don't hide that fact that I try to actually learn the rules and if I'm going to a tournament, I make sure I know the rules as well as I can, memory dependent.  Some people don't make any effort though and simply expect others to tell them when they are making a mistake, which winds me up. Grumble over - for now.

I noticed that the Norman player had six Saga dice, so I asked him to talk me through his army.  One eight-man unit of Warriors with crossbows, one twelve-man Levy unit with bows and one eight-man Hearthguard unit. I pointed out that this was four Saga dice - awkward moment as the previous three games were mentally reviewed.

I also had a small dispute with my partner over how he was using one of his rules...I don't like to see anyone getting an unfair advantage, it nerfed us a little but I'd rather play fair.

Things were a little awkward for a while, but that actually that helped me to focus in on getting some killing done...and I did.  Another win!

Three wins and one loss we'd made it to the final. 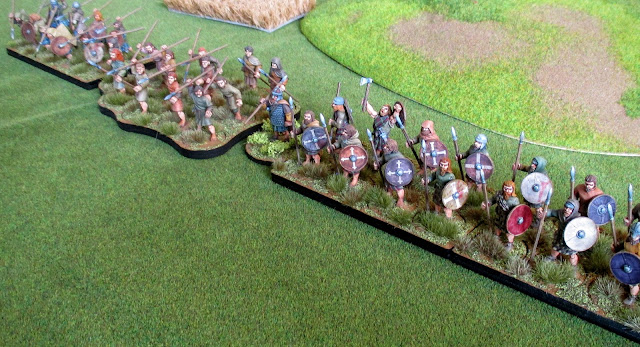 Game Five: vs Pagan Rus and Anglo Danes
I'll say it straight off, this was a terrible game and left a bitter taste in our mouths.  Our opponents sat on their side of the table and didn't move.  They spammed Frozen or some ability so we could only move S.  The Anglo Dane's kept putting Fatigue tokens on us and the Pagan Rus then played that ability whereby you have to remove a model for every Fatigue you have.  Dull, dull dull, boring yawn screw you guys. This was the closest I'd come to not shaking someone's hand at the end of a game since actually my first ever tournament (Flames of War).

Overall result Second Place, not too bad.  I also won Best Painted, which was a great feeling. I did get some feedback along the lines of "you should put more effort in to the basing". Good feedback and I know in the past it's cost me a win in the Best Painted category in the past, so I should look into improving that.

So that's my first Saga tournament.  I would rather play one-on-one games, simply because of the terrible combinations you can come up with... a real pity as other than that Doubles is a lot of fun, you get to talk tactics, trash talk and get to know more players very quickly.

Then it was home in time for my birthday meal, cake and presents.  A perfect way to end a tough, competitive and generally speaking enjoyable day.