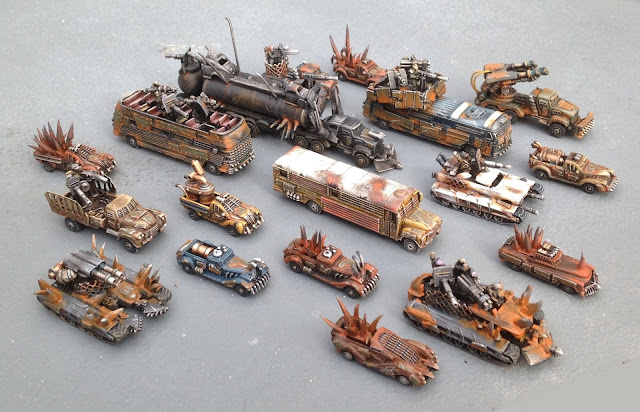 ROUND FIVE
PREPARATION
The fifth and final round of the Escalation League was here! I was sitting pretty at the top of the League, but Adam and others were not far behind and a bad result here would see me fall. Would the worst happen, or would the Resistance once more smash their way to the top?

Preparing for this battle doubled as practise for an upcoming tournament, as we had found out the three scenarios being run on the day. For the fifth round of Escalation League and for something a bit different, Simon chose to run one of the tournament missions - Ground Control. With this, and the other tournament missions in mind, I made a few changes to my old 1,500pt list.

The following list was made with the missions Ground Control, Military Complex and Bunker Assault in mind. Thus, I had a good core of infantry, supported by the usual Freeriders, Cyclones, Gun Wagons and the Thunderstorm in command. New additions were the Scout ATVs who had proven so useful in the past, the Barrel Bomber that had helped immensely in the Objective-based missions, and the Fire Wagons which I had never used before, but wanted to run for the Bunker Assault and Military Complex missions. In Ground Control they might feel a little redundant, but it never hurts to have fire when Medusae and the like are running around!


One band of Scout ATVs

One band of Resistance Fighters and one band of Occupation Veterans mounted in Battle Buses (one with Rocket Battery), carried in an NT-1 Kraken Hovercraft
Three AH-16 Cyclone Gunships

The size of the Battle Groups was considered - I love having big infantry groups as in the missions where the infantry prefer to hide (like Ground Control), I still have something to do. The Freeriders were potentially a liability, but they take a LOT to kill. Leaving the Gun Wagons alone was okay - they are used to this, and the resilience of the Kraken means it is difficult for me to lose the entire Battle Group. The Warlord's HQ is a big Group, because I like them to do lots of things at once and the Thunderstorm is surprisingly easy to kill if focused upon.

The fifth game would be against Simon, local Talon and organiser of the Escalation League. His up-and-coming UCM army had been left at home this time, so I would be facing his rather brutal PHR list. Facing me, a Zeus and Odin in Neptune, accompanied by Valkyries in a Triton and Medusa in Triton-X, two squadrons of Helios skimmers with lone Phobos walkers accompanying them, a small unit of Immortals in a Triton and a pair of Hades Type-4 walkers with lone Apollo escorts. The paired Hades was obviously a nightmare, and that was a lot of AA - bad news for the Cyclones!
THE GAME
Simon's force held back in the opening turns, hiding their massive anti-air batteries out of range. The infantry were held off the board, while the command walkers moved down the flank in their transport, supported by one of the Hades and an Apollo. The paired Hades and their Apollo escorts set about systematically destroying the buildings in the centre of the board, bringing down three buildings in quick succession and leaving the table rather open in the middle.

In turn, the Resistance played safe, keeping the infantry off the board but launching an attack down the right flank while a small force of Freeriders, Gun Wagons and the Fire Wagons headed down the left. The Freeriders put themselves in some bad positions and were (eventually) destroyed, but this distracted the PHR long enough for the Scout ATVs to blind one of the Helios squadrons. The Cyclone Gunships swiftly smashed them to bits.

One Hades was then blinded by Scout ATVs, yet managed to turn on them and wipe them out, but Simon was slow to react as the Neptune carrying his Commander was harried by Gun Wagons and badly damaged. The second unit of Gun Wagons launched a surprise attack, bringing down the Tritons as they sped onto the board and destroying all of the Immortals. The Valkyries survived and hid in a nearby building, which was promptly smashed by the Barrel Bomber.

In the closing moments of the game, the Gun Wagons brought down the Neptune and destroyed both the Zeus and Odin still on-board, the Cyclones emptied their reserves into one of the Hades and destroyed it in one round of shooting, and the Thunderstorm obliterated an Apollo. With his force smashed and the Fire Wagons poised to unleash hell into the Medusa and surviving Valkyries, the game ended with all four Table Quarters under Resistance control.

Everything went like clockwork for the Resistance - they lost two bands of Freeriders and the Scout ATVs, but caused 771 Kill Points by the start of Turn Five, and claimed all of the Table Quarters for a 20 - 0 VICTORY. Brutal!

Simon's force was sound, but his dice were poor and the slow speed of the force, combined with the decision to risk the gauntlet with the Gun Wagons allowed the Resistance some significant kills. My own dice were fantastic, no complaints on that front! Once again, my record against PHR is maintained, and with twenty points my placing in the Escalation League should be pretty well assured. Good game, great result.

THE FUTURE
The focus now turns on the upcoming tournament. This latest list needs some more table time, but a combination of factors (mainly work) will make it difficult for me to get more than a couple of games' in. Hopefully they will prove useful!

Future painting projects will be focuses on a few more flyers - especially Karl Foley's Hellhog and perhaps a second Barrel Bomber, but honestly I am not sure at the moment. We shall see how the tournament influences my next choices...