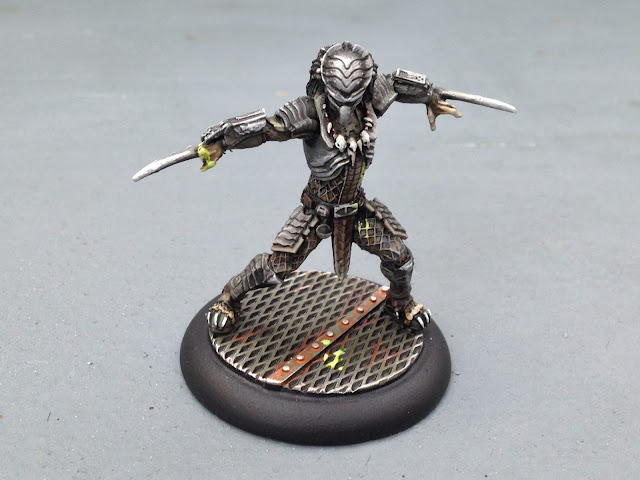 Two new projects hit the painting table this week - something special for the Resistance in Dropzone Commander, and a new system - Alien versus Predator! Finally, after over three years, I have received some of my Kickstarter pledge and now have a big pile of resin ready to be built and painted. I'm very excited for this - it was about time I returned to 28mm scale, and in lieu of starting a new Infinity force or getting back into Batman, these models will offer a great distraction.

The models are stunning, but some of the tiny wristblades were bent/broken, and rather than contact the company and wait another three years, I thought I would simply replace them with plastic blades from the Dark Eldar range. Much hardier, and less likely to warp! I think they look great, and would hardly notice a difference without close inspection.
Dragging out some of my old Dark Eldar sprues also gave me the impetus to convert up my latest model for Dropzone Commander - the Aegean Dropship. Normally a model for PHR, I resisted the urge to collect a new force or turn it into scenery, and instead converted it into a looted Lifthawk! Cheers to the guys at Call to Arms II for giving me the idea! This spiky bastard will operate as a Lifthawk, and get itself a nice grey paintjob with lots of rust and battle-damage...
Thanks for reading,