REINFORCEMENTS FOR THE WARBAND AND MORE GAMES OF THE CAMPAIGN 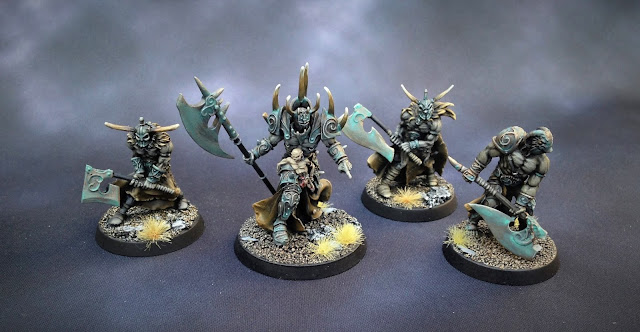 Some weeks ago, the release of the Frostgrave Folio saw the Sellsword expansion finally fall into my hands. Recent success on the battlefield has seen my warband build up enough gold to consider some expensive purchases. Lastly, I had the perfect model - the greatest of the Apostates of Darkness, ready to paint and act as my Captain.

After some frenzied painting, I am ready for my latest addition to hit the gaming table!

The Captain will be given an additional +1 Fight as his starting upgrade, with the Furious Assault (+3 Fight) and Coup de Grace (+2 Damage as long as other damage has been caused) Tricks of the Trade. I intend to bolster this further with a magical double-handed weapon (+1 Fight) and a Potion of Strength (+2 Fight). A big investment, but should cause a headache for anyone who gets too close! Additional armour and protection will come later... first the bloodshed!

Alongside this monster, I invested in a Treasure Hunter to replace a lost Thug. For this I used the female Red Karnagh model, the third of the set (the other two I have used as Barbarians).


Game Six - The Keep
My sixth game of the campaign saw five warbands approach The Keep and the strange Circles within it - four dais each with a treasure and the power to teleport those upon them across the battlefield. Against the northmen were Jack and Matt with their Enchanters, Alex and his Witch and Winner Dave's Gnolls, led by his Soothsayer. Along with the four treasures on the circles we ran an extra five pieces of treasure, and I had managed to use Reveal Secret to find another.

The game started well - Matt and Alex were closest to me and they were rightly scared of my veteran warband, using Fog to block off line-of-sight. This was not a huge problem as it gave me the opportunity to grab some pieces of treasure and march toward the rest without worrying about magic and crossbows! The Demon unleashed from one of my brewed potions secured one treasure after it was drawn closer with Telekinesis. The Treasure Hunter and Barbarian made for the centre where they faced Matt's oriental-themed force and performed underwhelmingly, but managed to escape with another piece of treasure. One Thug leaped onto the nearest dais and grabbed the third - bringing the total to four after an Archer dragged off the Reveal Secret treasure. The Wizard gained some valuable experience on the teleportation circles, and then reappeared back in my corner, ready to assist the Templar and Captain fighting Alex's dwarves.

The main excitement of the game saw Alex's warband clash with mine, leaving the Templar dead but a number of dwarves in the dirt. Alex made a mass rush for the teleportation dais and suddenly his warband were out of reach, scattered across the board! The Captain gave pursuit, cutting down an enemy Templar and Man-at-Arms without pausing for breath, while the rest of the warband secured their treasures.

Tricks like Bones of the Earth held me back, and I was unwilling to scatter my force across the board as Alex had done. In the end I had suffered a wounded Thug (to a warhound, no less!), a Barbarian out of action but unhurt, and a dead Templar - cut down by an axe-wielding dwarf before the Captain could avenge him. A good showing for the wildmen, who had brought down several enemies and retrieved a mighty haul of treasures.

Four treasures, teleporting the Wizard, taking out an enemy with Bone Dart and casting eleven spells gave me a tidy 400 Experience Points, enough for another four levels! The four treasures netted me four Scrolls, a Grimoire of Enchant Armour and enough gold to bring the total up to 990 Gold Coins after I sold all four Scrolls! That's a ridiculous amount of money, and I was ready to spend as much as possible.

The Captain gained 40 Experience, having survived and caused two kills. Nothing special, and I wonder how long it will take me to get him levelled up. He's a great addition to the warband and a lot of fun, but the potential for upgrades seems a long way away.

For the Wizard I resolved to learn the Strength spell as it would make my Captain (and other members of the warband) incredibly dangerous. A Fatestone would also make the Captain even better - and less likely to screw up those important combats. The Thug who had been badly wounded was replaced with a superior Infantryman, and the unfortunate Templar was also ready to be replaced. I had a couple of new models in mind to paint up, and this would give the excuse.

Spending Experience
Spending Gold
Onwards to the final scenario of the Rulebook, the Complex Temple!
Game Seven - The Complex Temple
For the last game from the Main Rulebook, six adventurers approached the Temple, and the mysterious pillars in the centre. Each of these held a treasure, but the magical Columns would fight to defend them. Six other treasures were scattered through the ruins, and Reveal Secret uncovered another. The risen zombie servant swiftly removed this treasure back to my Tower.

The northmen were deployed between the Gnolls of Winner Dave and the Roman-styled warriors of Jack. On the other side Matt and his oriental-themed force, Ethan with his Witch, and Gareth's Witch. My own force was the most powerful (highest level Wizard, at least), and swiftly advanced toward the centre of the ruins, promising no aggression without provocation - I would not attack anyone without being attacked first! The rest of the Wizards spent their time securing treasure while Ethan and Gareth has a small skirmish and Matt dealt with wandering beasts.

Matt played cautiously, running forward and dodging back with his Thieves and Warhound, but it was Jack who took the bait and launched a sneak attack on the wildmen, while my Wizard was distracted fighting a Column. His Archers wounded my Thug carrying treasure, and also caused some damage to my Wizard.

The response was swift, as the Chieftain launched his attack directly into Jack's Enchanter. The red-clad warband counter-attacked with their own Captain and an Infantryman, but the Chieftain was a killing machine, bringing down all three in short order without suffering a scratch. All that gold on Potions of Strength, magical weaponry and a Fatestone more than paid off.

Meanwhile, the Soul-Thief cast Glow upon Jack's Apprentice, and the Archers and my own Apprentice quickly cut him down.

A bold shot from Matt at maximum range then caught my Wizard unawares, causing enough damage to bring down! For the first time all campaign, the Soul-Thief was out of action. Luckily he survived unharmed, but it was a surprise to be sure!

A rogue arrow also badly wounded the Chieftain and he spent the rest of the battle hiding in the Fog as my Barbarian and summoned Demon (Demon in a Bottle!) plunged into Jack's remaining forces. Several escaped with treasure, but the Barbarian managed to bring down an Archer before being felled as well.

On the other side of the battlefield the Treasure Hunter and Thug ran away with a pair of treasures, while the Templar and Infantryman went in a different direction. After suffering a Poison Dart the Templar was relegated to support duty as the Infantryman smashed a second Column and recovered a fourth treasure.

In the closing stages of the game fire from Matt took out one of my Archers (badly wounded as a result), but the rest of the warband secured their treasures and withdrew. A bloody mess of a game! My warband has been spread thinly across the board, but the massacre of Jack's warband was brutal and put most people off getting too close. In the end I had suffered minimal casualties (though the Wizard was shaken up a bit!) and recovered four treasures, with enough experience for three additional levels. The Captain who scored enough damage to level up once, though I am still thinking about what to give him as a upgrade.

After selling a Grimoire for a spell I already knew, I had recovered 800 Gold Coins, a Staff of Power (2) and a Grimoire for Create Grimoire. Perfect! That spell looks good for free money! I invested in some upgraded missile troops, a Potion of Strength for the Chieftain and an Elixir of Life in case my Wizard or Captain should die.

A solid end to the first seven games! My warband is looking very well-equipped at the moment. Ready for the next round... Thaw of the Lich Lord.