"In the aftermath of the raid on Utsira, the Russian fleet had the opportunity to refit and refuel before their grand attack upon Stavanger. In the days that followed, they were joined by reinforcements from the Barents Sea - a carrier group and gunships that would bring powerful gunnery to the depleted White Banner Northern Fleet.

The Prussian Navy and their allies in Prussian-Scandinavia and Denmark were scattered and overstretched, unprepared for such a deep incursion into their territories. The defeat of the Wolf Pack and two Metzger Battle Robots at Utsira was a loss they could not risk again, yet equally they could not allow the Russian Navy to come into range of Stavanger - the Russian mortars would level the port in hours and cripple Prussian naval operations in the North Sea for months.

Prussian Naval Command ordered the 46th Interdiction Group out of Bremerhaven to intercept the Russian advance at Kvitsøy, a small archipelago some miles north of the Stavanger peninsula. Made-up of some of the most advanced vessels in the fleet, the Battle Group were fresh from refits at Stavanger itself, and would be well-prepared to meet the implacable foe. 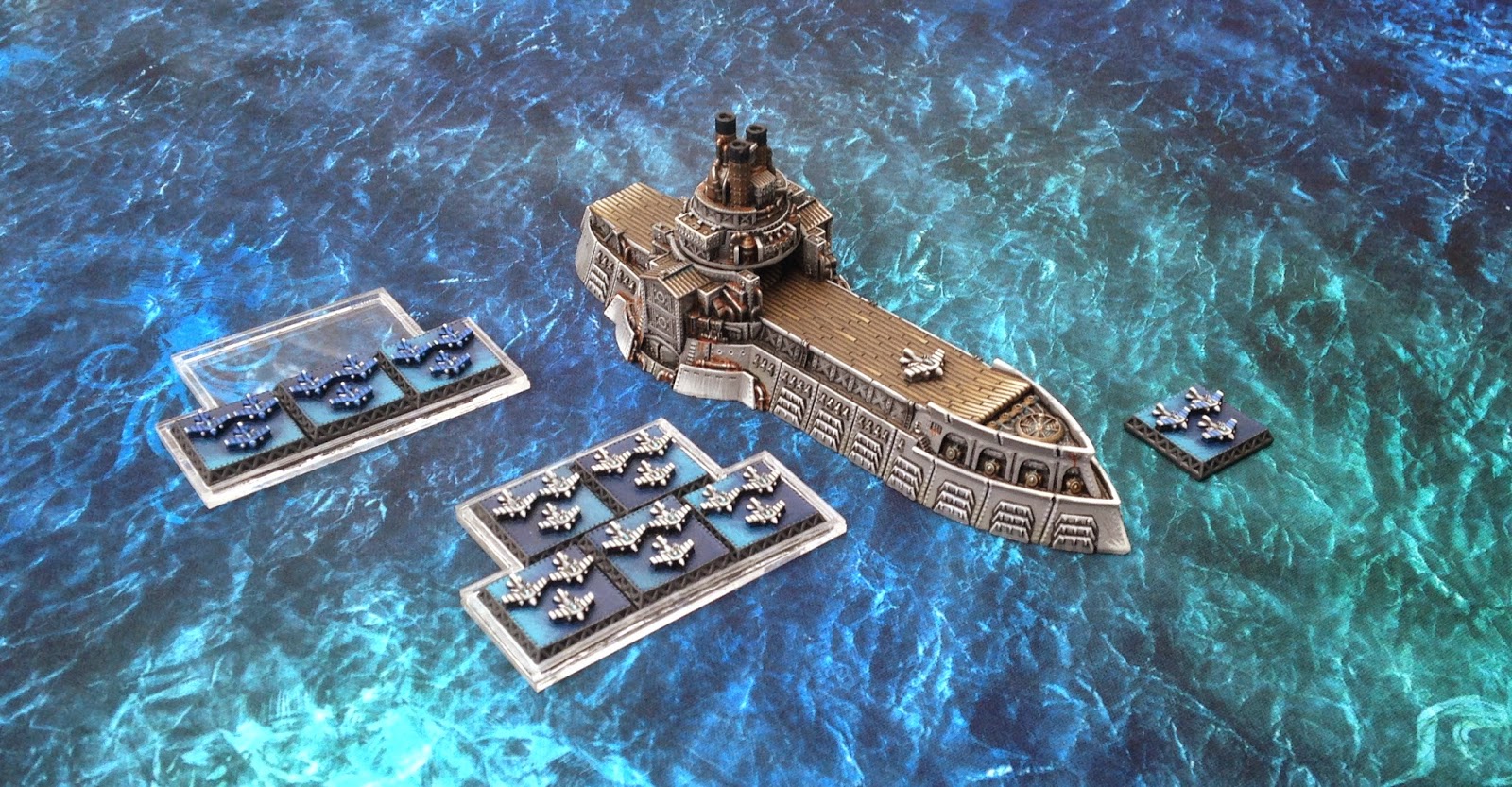 Welcome to another Battle Report from Full Spectrum Dominance and the next stage in the Hunt for the Markgraf narrative campaign. Following a series of crushing victories, the Russian Coalition continue their attacks into the Norwegian territories - this time at the rocks of Kvitsøy, where they face the Prussian Empire once more in a 1,500pt match.

This time, my Good Friend Ben will be running the Russian Coalition - he has always wanted to collect them and was rather annoyed when I picked up a fleet! As consolation I'm lending him the fleet for this game. I will be running my old favourites the Prussian Empire - I have shamefully little experience with them in the new Edition, so am looking forward to using a good-sized fleet in a pitched engagement.

The board was set with lots of small rocky outcrops, and one abandoned weapons platform in the centre. A lone iceberg drifts in the Russian deployment zone.

TURN THREE
AFTERMATH
At the end of the Third Turn, the Prussian Empire had achieved their Objective and scored 808 Victory Points, but the Russian Coalition had also scored their Objective and an impressive 965 Victory Points - enough to secure Victory for the Russian Coalition! A hard-fought game utilising a great deal more tactical manoeuvring, feints and ambushes than the usual slug-fest!

CONCLUSIONS AND LEARNING POINTS
The power of the Russian Coalition is ascendant! Brutal firepower and great armour gives them the edge over the more subtle Prussian Empire. Ablative Armour and waves of conscripts prove their worth once again.

As discussed in previous games, the Prussian Empire have come to find the Russian Coalition a difficult foe, with their natural advantages of speed and Boarding power outdone by the sheer brutality of the Russian armour and massed AP. I think in the future, more guns may be the answer - the winners for this game on the Prussian side were the Gunships, Heavy Battleship and Destroyers - though the combination of Tesla attacks and surprise Boarding from the Corvette squadron did take the Russian flagship out of the game.

In turn, the Russian Gunships and Assault Carrier carried the fleet, though almost all of the squadrons had their chance to shine. The Suvorov-class Cruiser squadron were abandoned on one flank, left to be destroyed, but their powerful turrets still caused misery for the Uhlan-class Cruisers. For an extra fifteen points apiece, the Tambov-class Gunships are brilliant and will be a mainstay for the fleet in the future.

I was worried that the Assault Carrier would outshine the Fleet Carrier in the Russian fleet, but they both had a role to play and worked well together. The broadside on the Kostroma is particularly powerful and should not be forgotten.

The Borodino-class Battleship feels a bit... mediocre for its size. Losing it in one turn here may have been the cause of this worry, and I think I will need to try it with some Escorts to get the best out of it!

The Azov-class Battle Cruiser maintains its position as top Battle Cruiser in our book - great in all respects. The pair together caused monumental damage.

The Prussian Fighter Planes neutralised most of the Russian Dive Bombers, but having two massive Carriers gave Ben the advantage later in the game. Sacrificing my Fleet Carrier to achieve my Objective left me unable to re-arm my aircraft and deploy Bombers in the later turns. I am thinking more and more that taking several Carrier may be a valid tactic!

Overall I think the Prussian Empire held their own and did well with what they could manage, but my own poor positioning and Ben's expert placement of the icebergs divided the fleet and left many of my ships without a target until it was too late. Abandoning the Fleet Carrier on one side of the weapons platform made it an easy target, while the squadrons of Frigates and Corvettes could not withstand the gunnery of the Russian Gunships, Carriers and Battle Cruisers.

The final result is disappointing for the Prussian Empire, but they still managed to cause serious trouble for the Russians, and this was the closest game of the campaign so far. In the future, where the Prussians could disrupt the board control the Glacier Generators offer the Russian Coalition, I predict a different result.

Much happier with the quality of the pictures for this report - this was played in the workshop in my garden, in bright daylight. More Battle Reports coming this summer then!

THE NARRATIVE
"...few could have predicted the 46th Interdiction Group would be broken so quickly, battered aside by the rams of the Russian capital ships and stymied by conjured walls of ice. Though leaderless with the loss of their Commodore, the Russian fleet sailed on towards their target and brought their bombardment vessels forward to begin the shelling of the port.

...as their attack began, the survivors of the Interdiction Group rallied and turned about, ready to punish the arrogance of the White Banner Northern Fleet. The attack on Stavanger would go ahead, but the Prussian fleet commanders vowed it would not go uninterrupted..."