SOMETHING DIFFERENT - A REPTILIAN BLAST FROM THE PAST 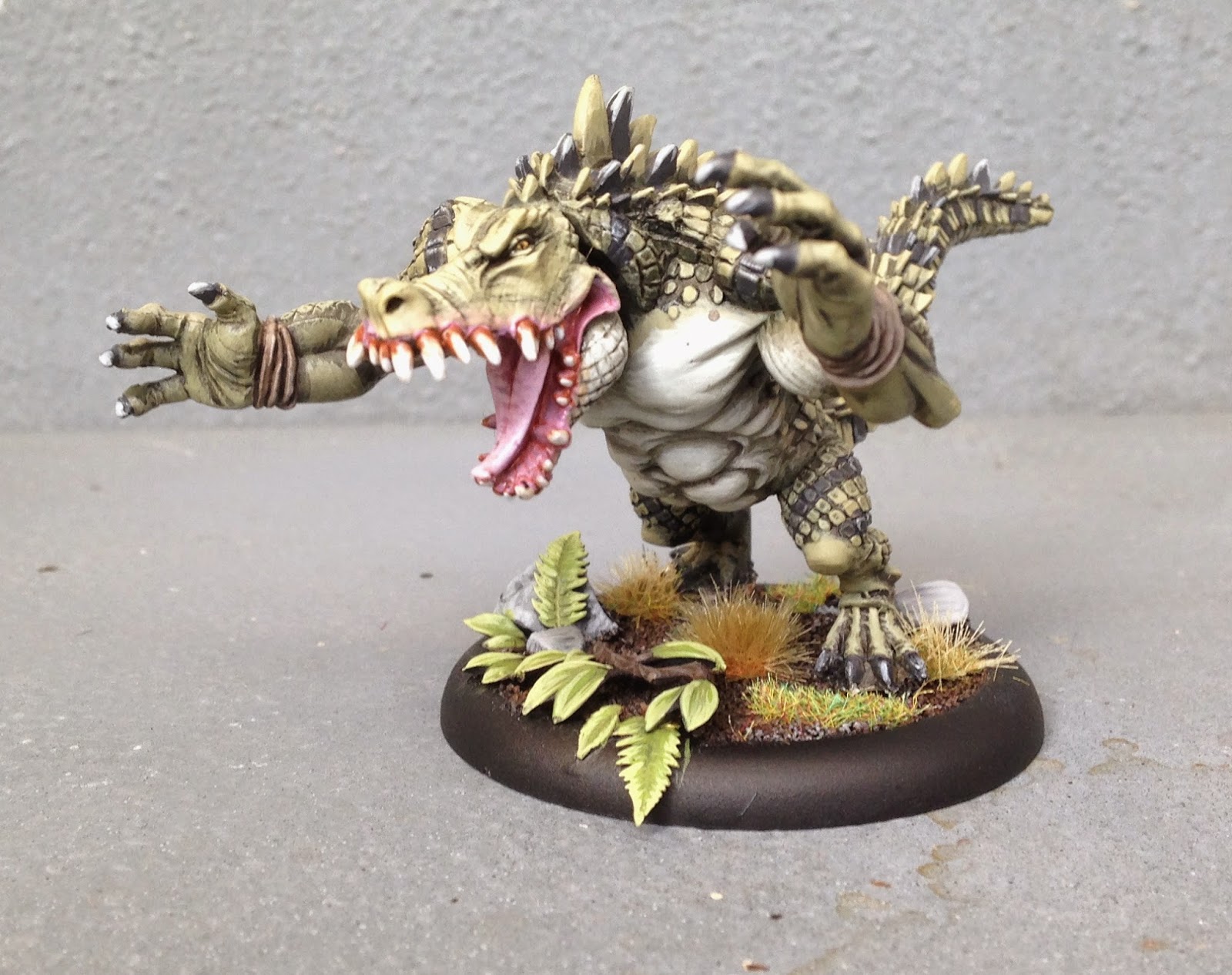 Infinity and Dystopian Wars may be my "main" games at the moment, but over the years I have collected, painted and played a good number of different wargames - Games Workshop and Warhammer 40,000 (Necromunda, specifically) first attracted my interest some fifteen or sixteen years ago. Privateer Press and their Warmachine and Hordes ranges have always attracted my attention, yet I have never played a single game - so it might seem odd that I have a fully painted Gatormen force!

I have always found the different factions of the game difficult to choose between - almost all of the ranges had some beautiful models, but were also cursed with some really bad ones. The Gatormen stand out to me, however - consistent theme with good-looking models and a relatively small selection which made them easier to collect. Voodoo alligators from the swamps is unlike anything I had seen elsewhere, making them fresh and exciting, and as I love reptiles in all forms, they were the clear choice.

As for the game itself, it has something of a reputation for being very competitive, often at the expense of the painting side, and I am not really interested in learning another game at the moment. For now, they will appear for some pretty pictures and then return to their box for a while.

Opening proceedings, the four Warlocks of the Blindwater Congregation. Each has their own specialities and idiosyncrasies, but with the running theme of Voodoo magic, necromancy and unrestrained, bloody violence.

Maelok the Dreadbound
The gatorman warlock known as Maelok the Dreadbound exists in a torturous state of undeath as an animated corpse bound to the will of another. Despite his decaying physical form, Maelok is still a mighty bokor who can return slain allies to life, steal the souls of the living, or connect to the spirit world to transform his army temporarily into ghostly horrors unimpeded by flesh, stone, or steel

Featuring massive open wounds, mystical candles and other strange accoutrements, Maelok is one of my favourite single miniatures from Privateer Press. He took a long time to paint, as he features so many different materials - metal, cloth, wax, reptilian skin, bone and more. 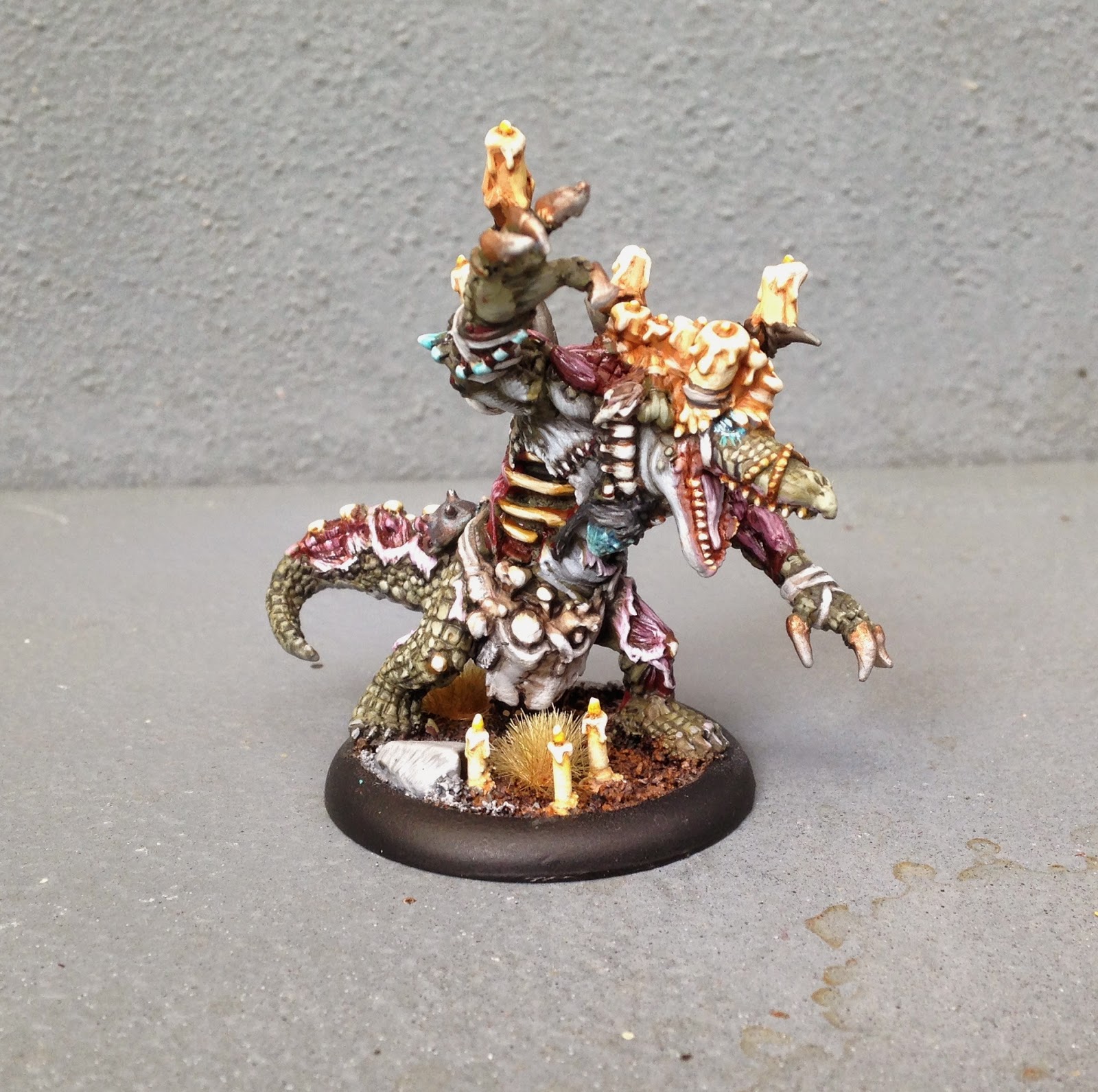 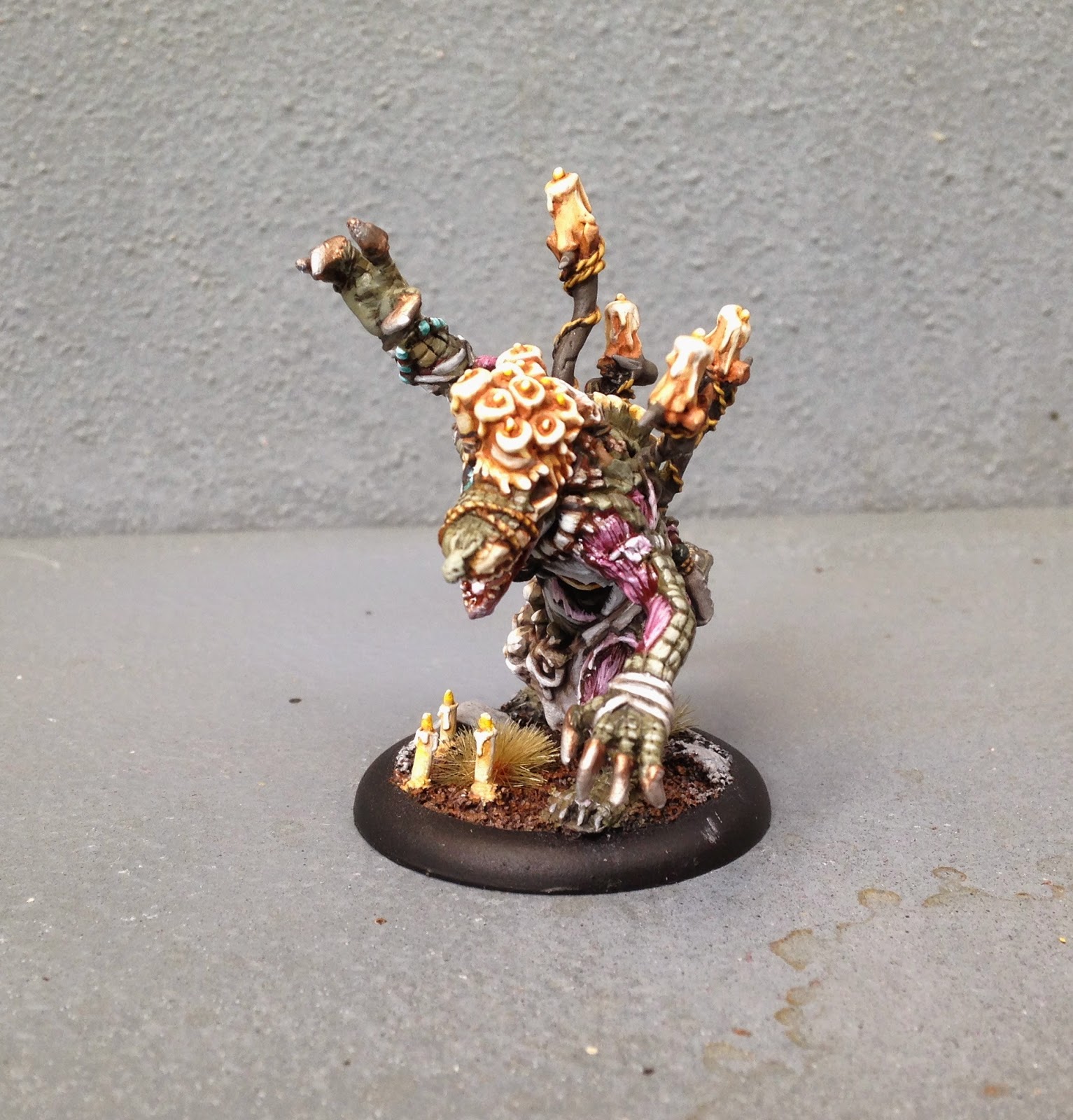 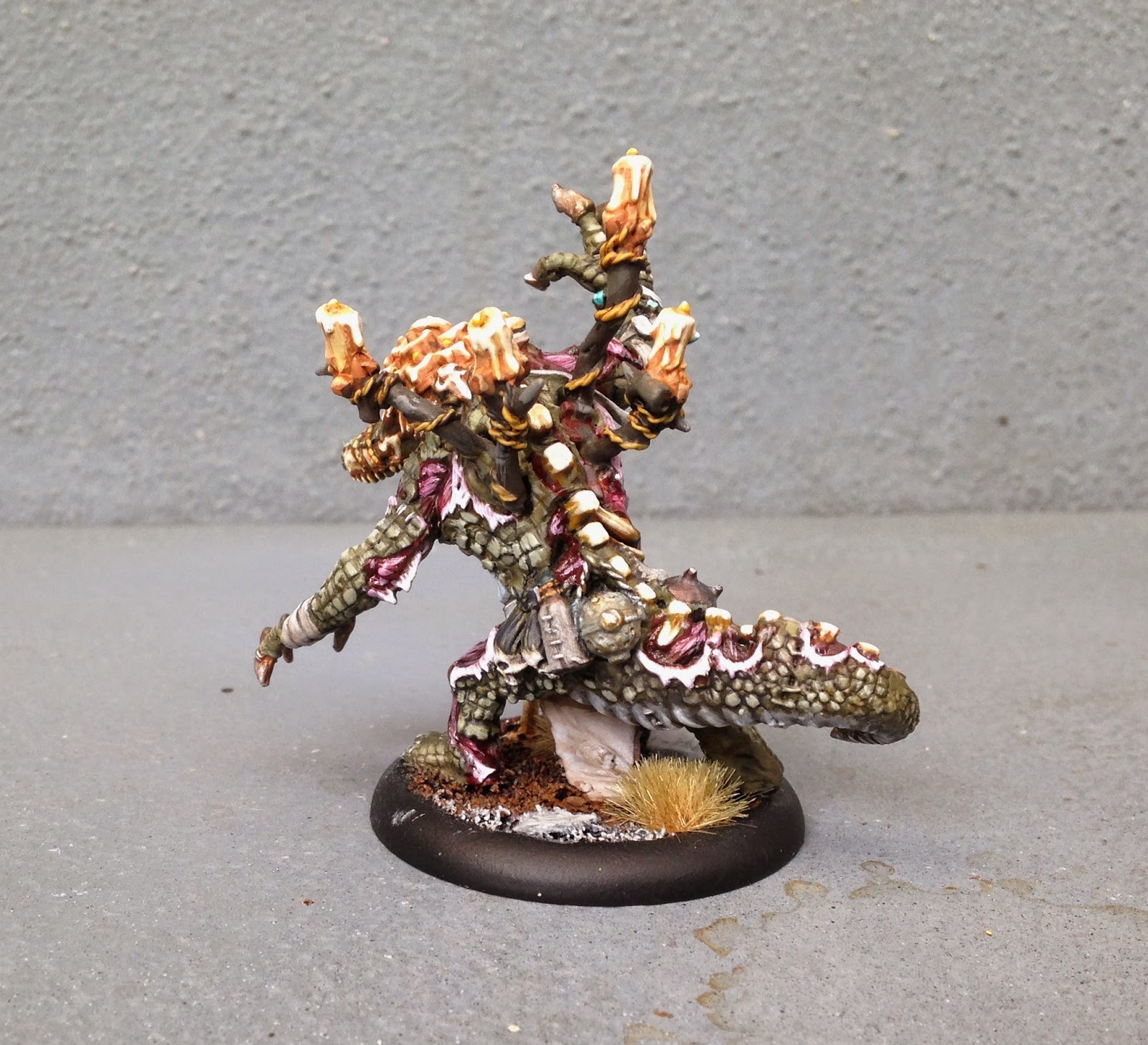 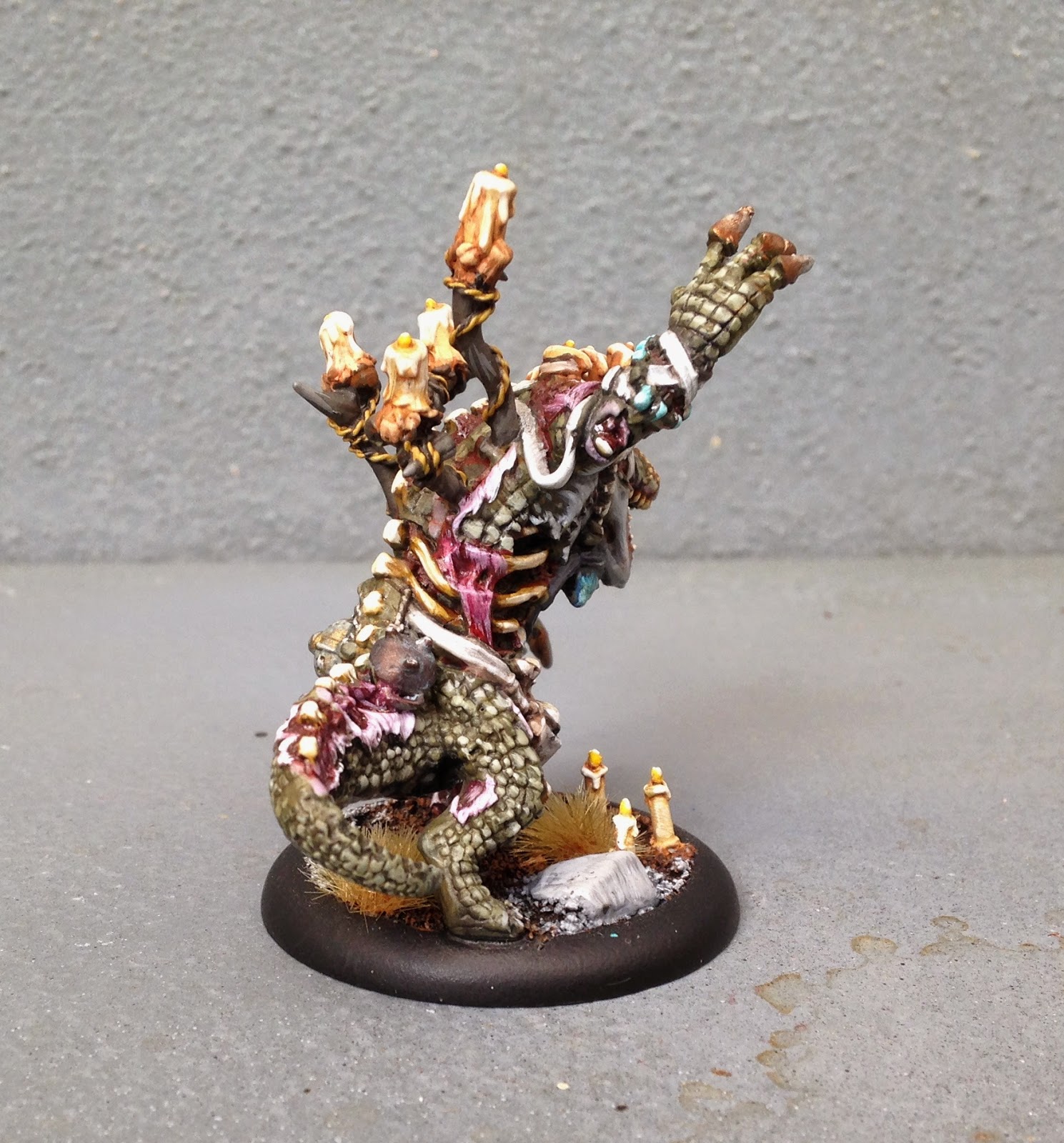 Jaga-Jaga the Death Charmer
Jaga-Jaga has risen to prominence as a high priestess of the Blindwater Congregation. In her talons writhe the spirits of death drawn from the swamps, each eager to comply with her designs. She is an enigmatic creature, whispering into the darkness to converse with ravening things of shadow. Around her the unseen spirits bubble close to the surface, drawn to her as leeches are drawn to disturbances in the water.

First shown last year, Jaga-Jaga is my most recent addition to the collection. I could not resist her brilliant blend of alligator with Voodoo-priestess, and the serpents all over her form gave the opportunity for lots of different scale-patterns and skintones. 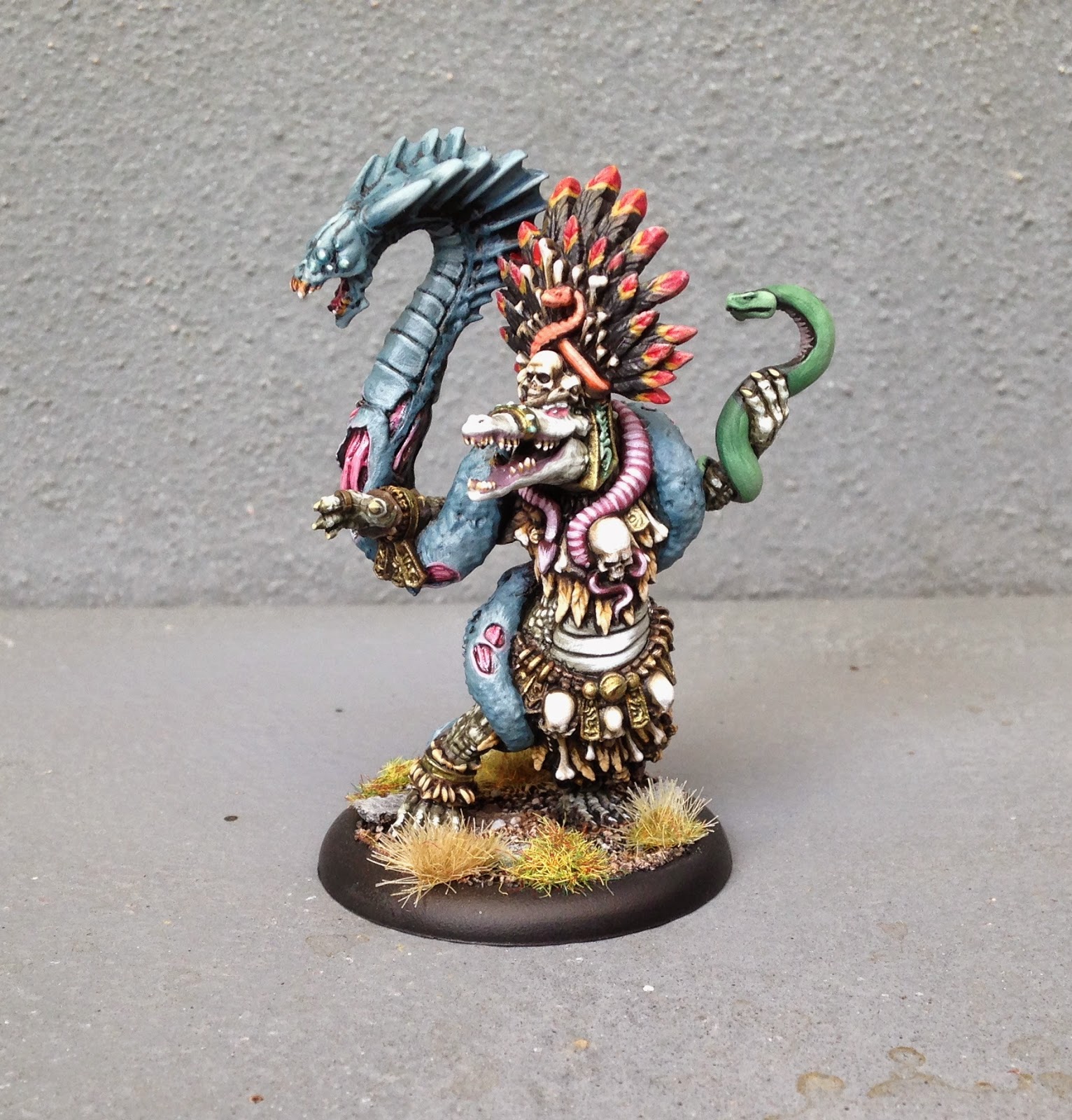 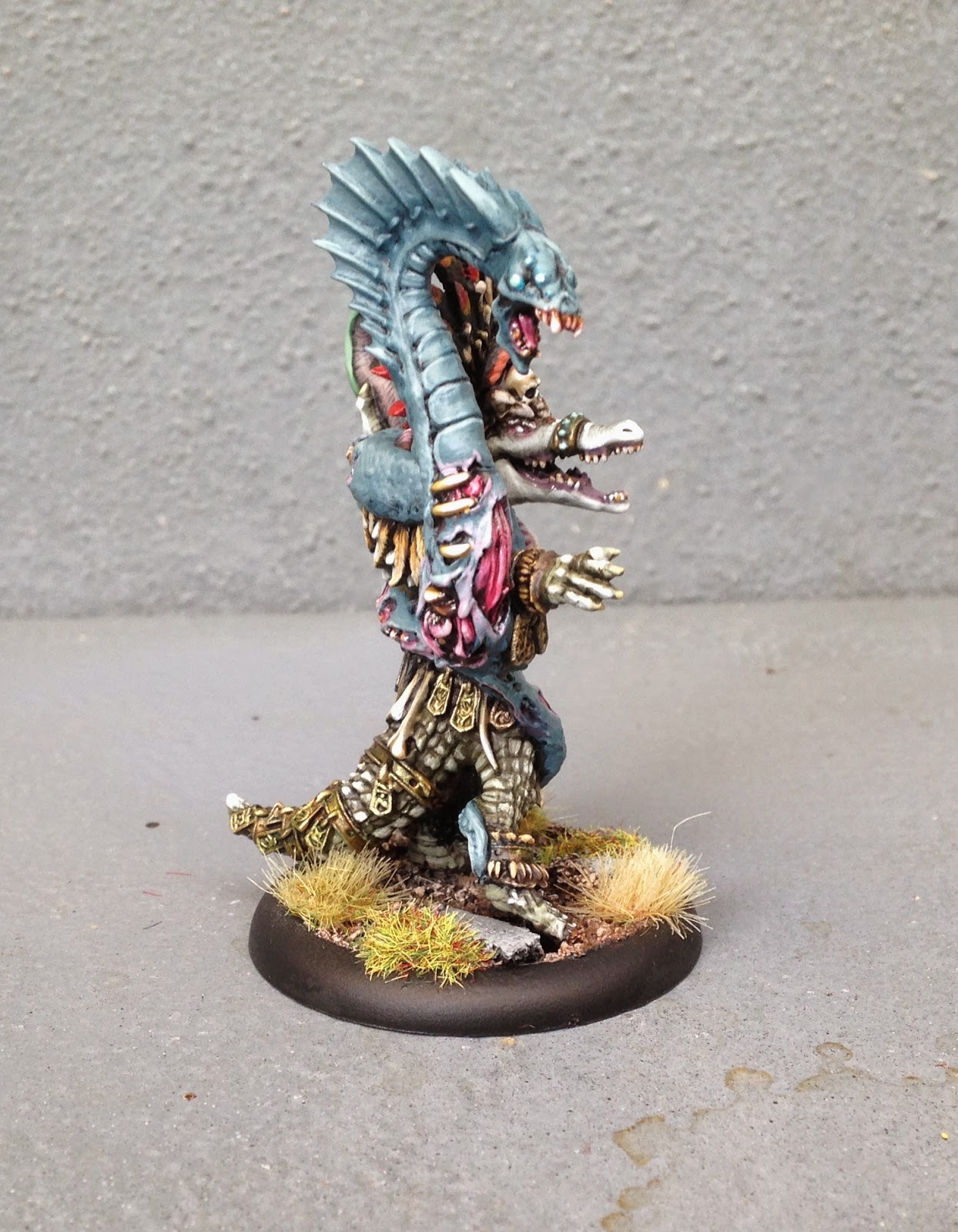 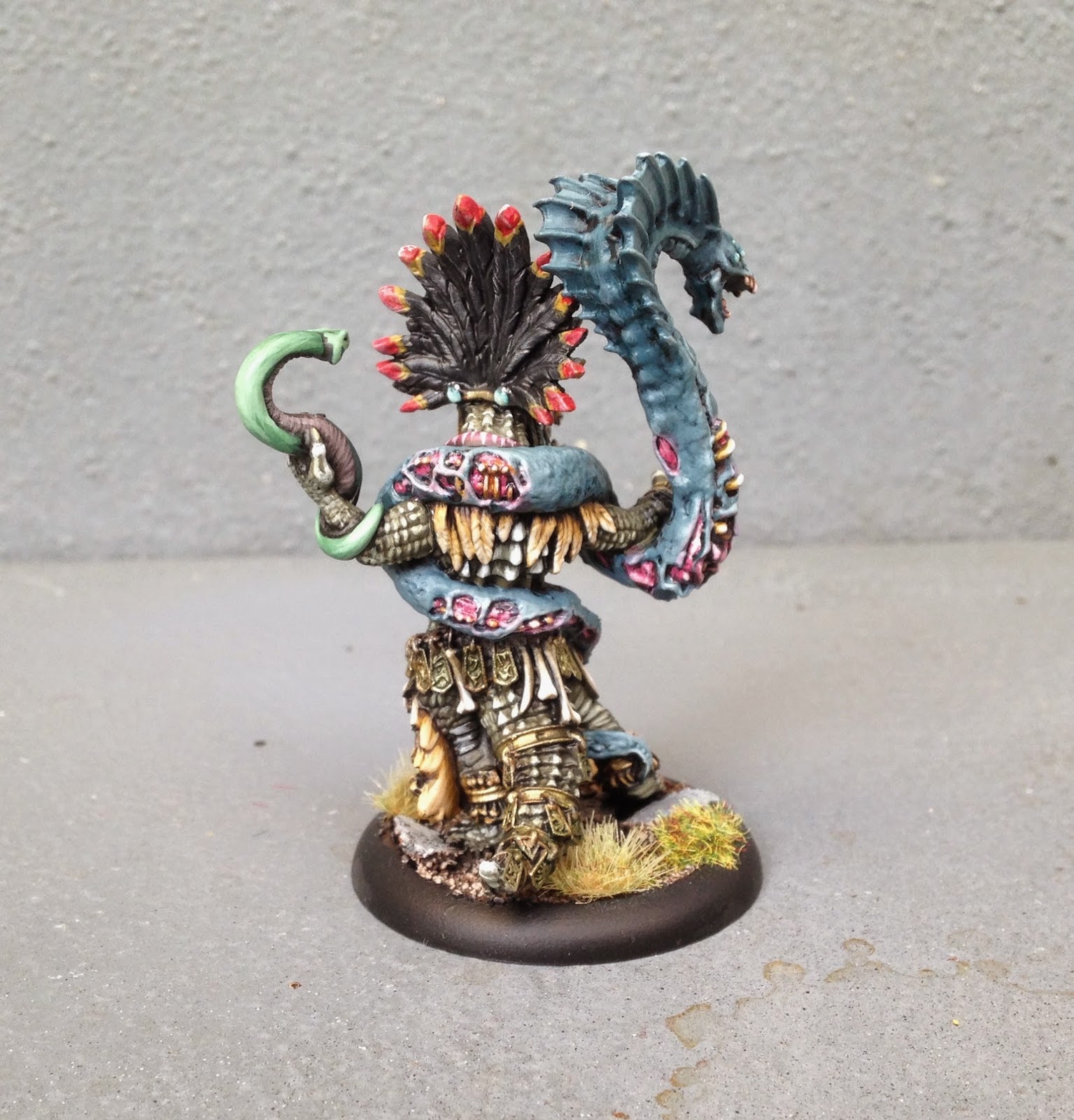 Bloody Barnabas
Bloody Barnabas is an aged gatorman warlock and a veteran of countless battles. In the wilds of western Immoren, only a gator of surpassing strength and tenacity could hope to reach his level of combat expertise. Barnabas calls upon the great warbeasts of the swamps to combat his foes, and he directs their attacks with cunning precision. Before his hungry children swarm, Barnabas summons a magical black tide to choke the enemies of the Congregation, leaving them vulnerable.

Barnabas is an interesting model, swathed in cloaks and visibly aged. Focused on violence rather than the necromancy of the other Warlocks, he does not have trinkets and baubles but rather skulls and trophies. I decided to paint the cloaks as flayed skin to give him a brutal edge and make him a little more colourful than the Studio version 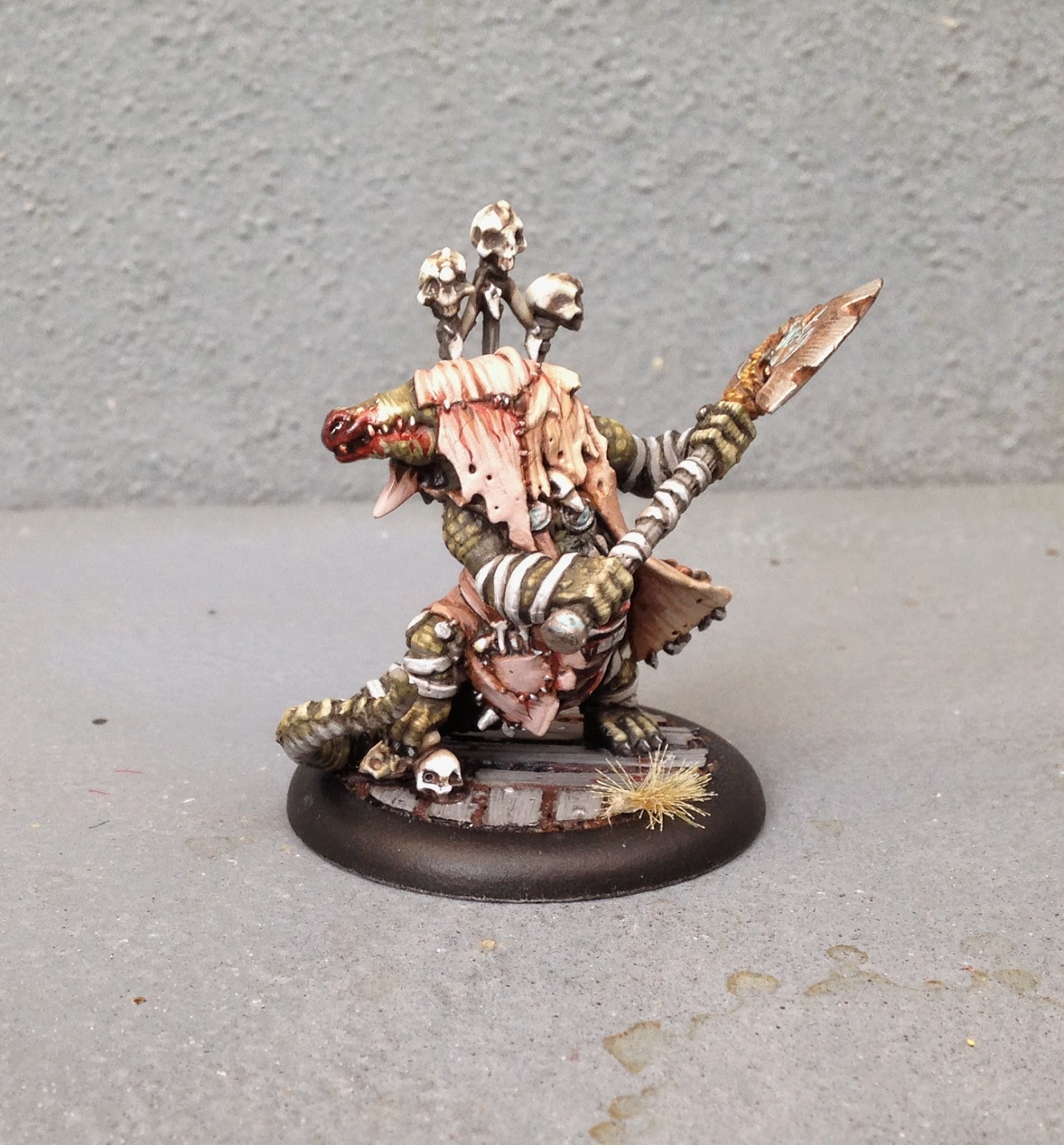 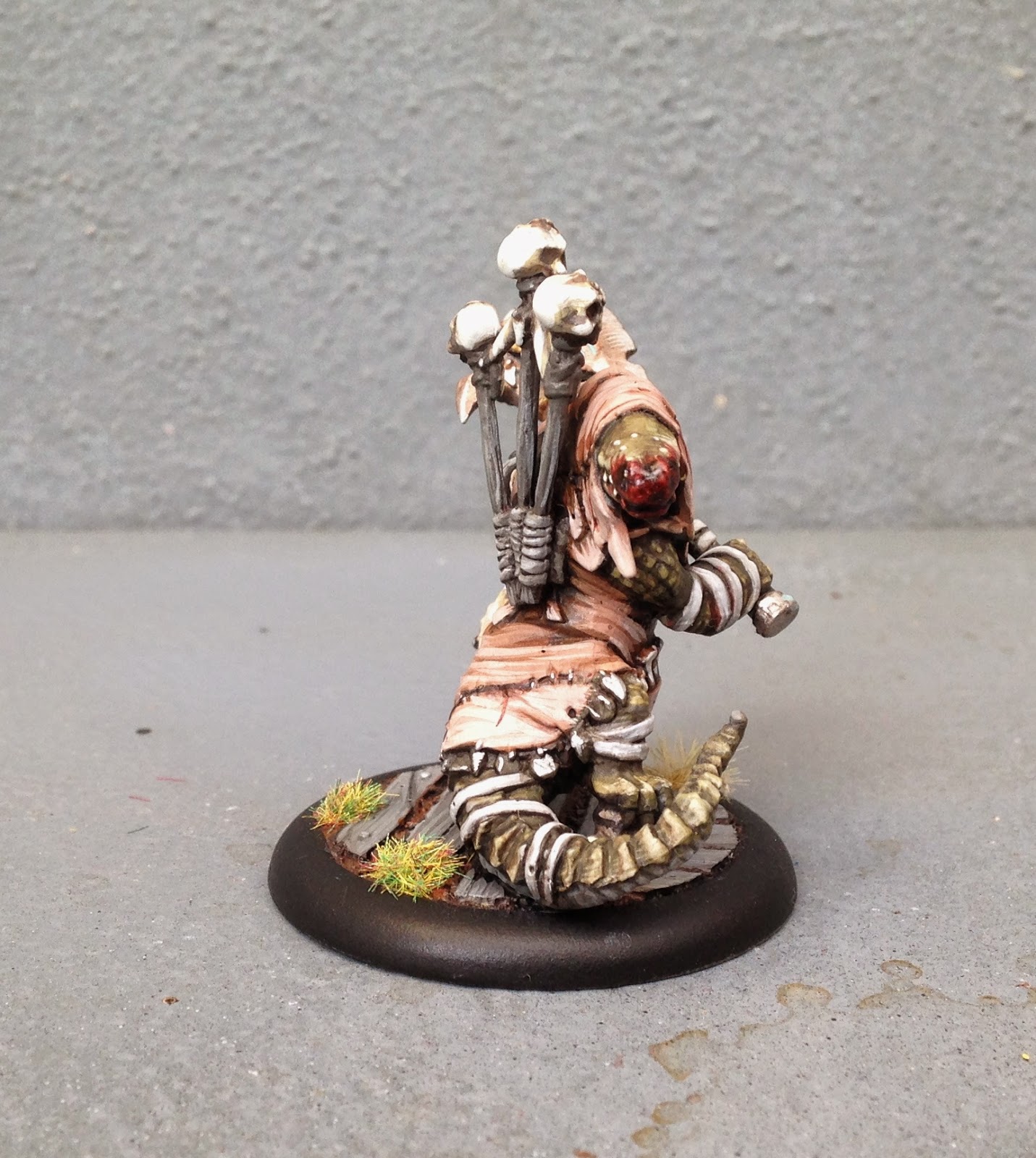 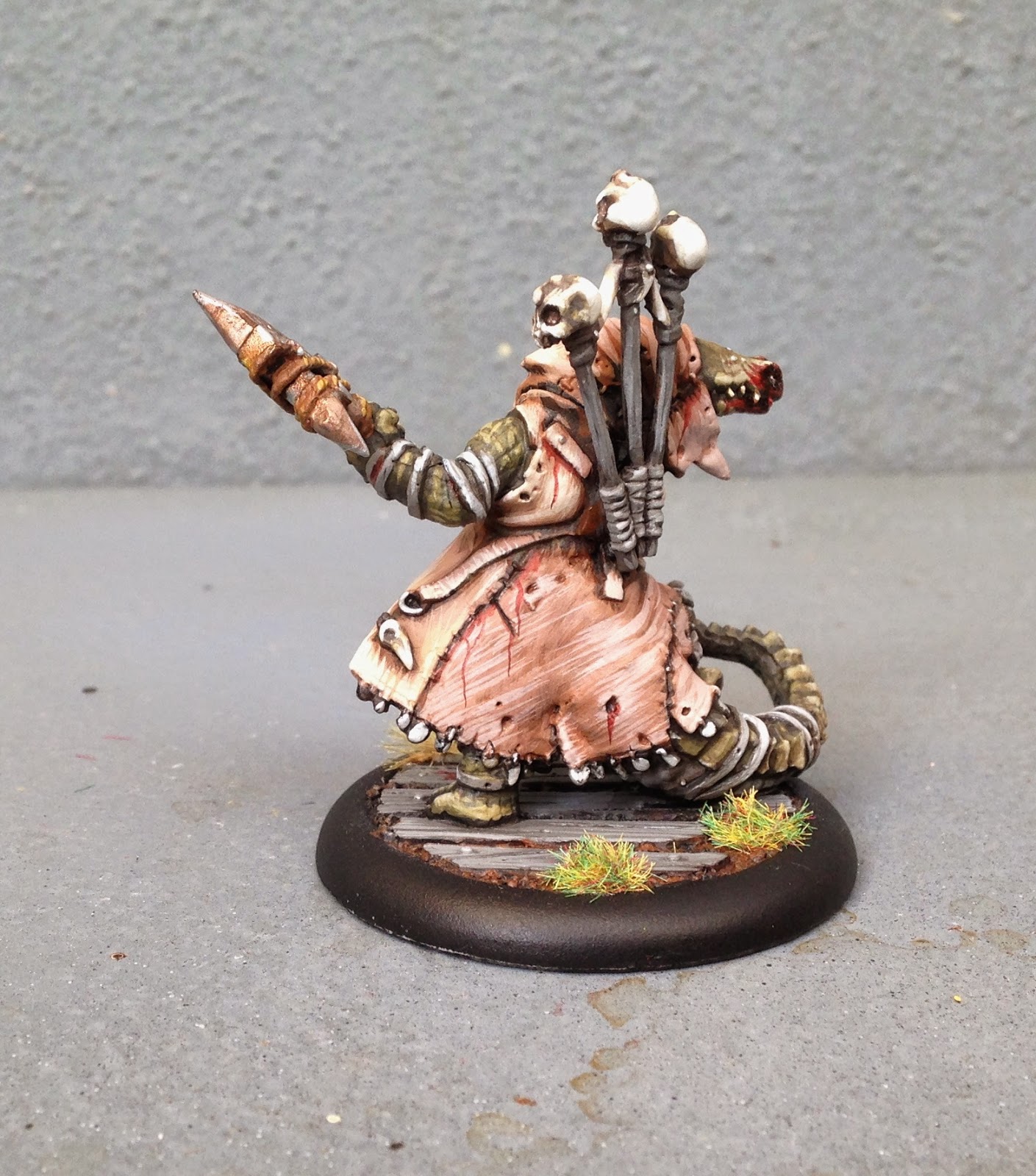 Calaban, the Grave Walker
The monstrous gatorman warlock called Calaban the Grave Walker commands fearsome powers over life and death. With his bone staff in one hand and skull talisman in the other, Calaban can drain the life force from an enemy and then use the withered shell left behind as a conduit for his dark magic.

Clad in necromantic fetishes, I tried to keep the colour palette of Calaban fairly restricted, to make the glowing blue of the shrunken head and his eyes stand out even more. The mask was painted with bright white markings, and the huge amount of bone pieces across the model make him a very pale creatures - not the albino of Jaga-Jaga but a more sinister, untrustworthy creature driven by his own desires. 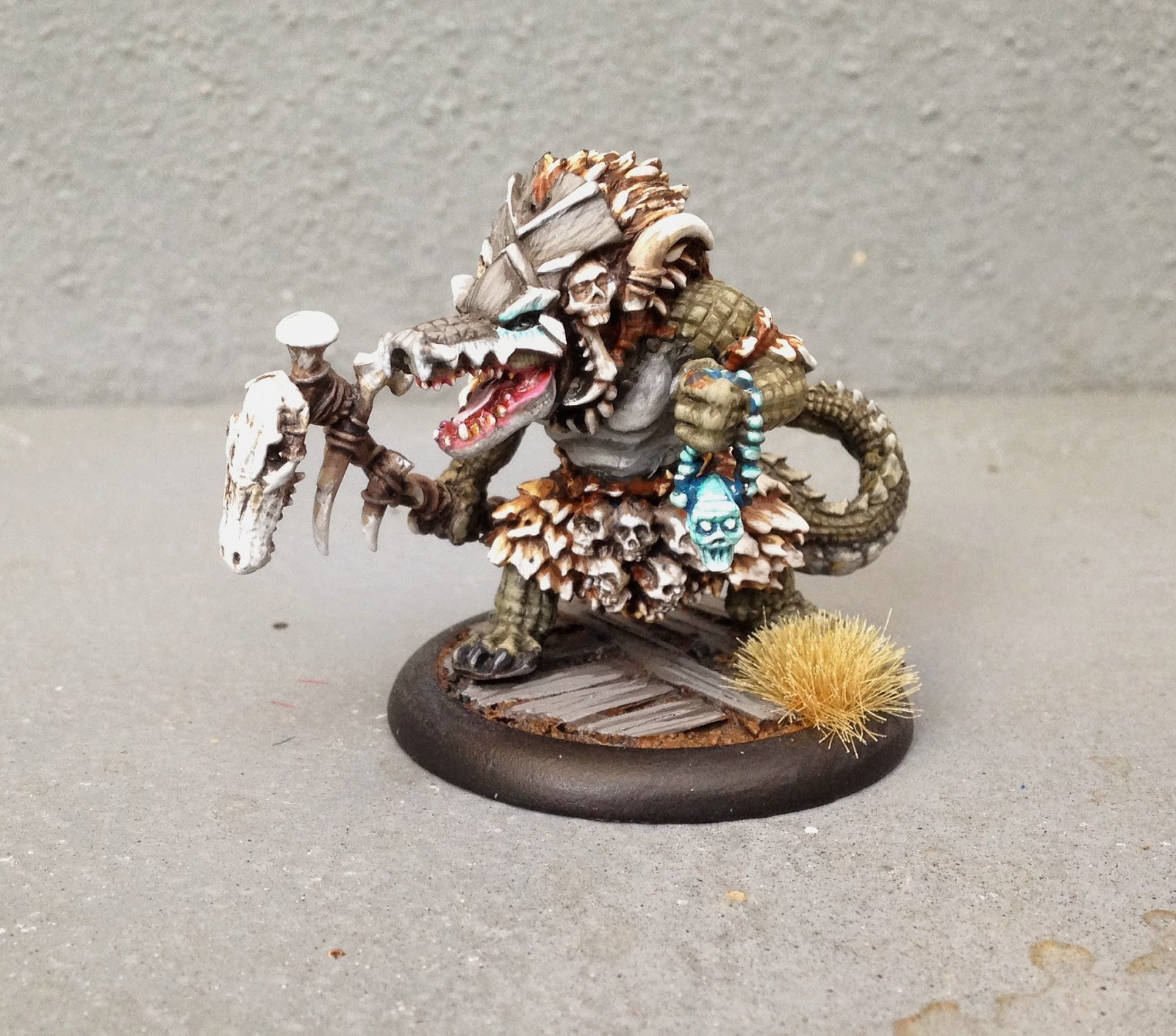 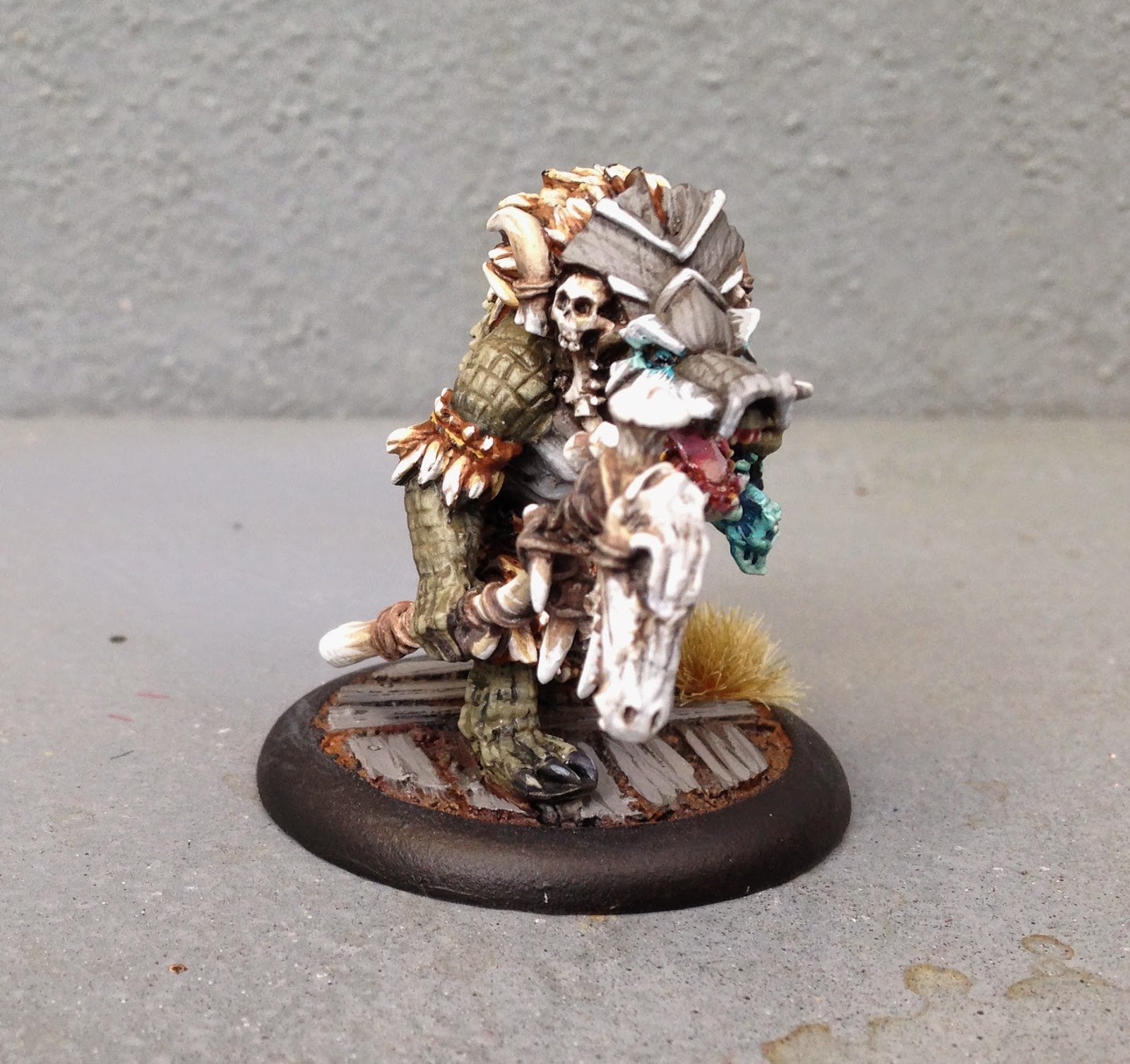 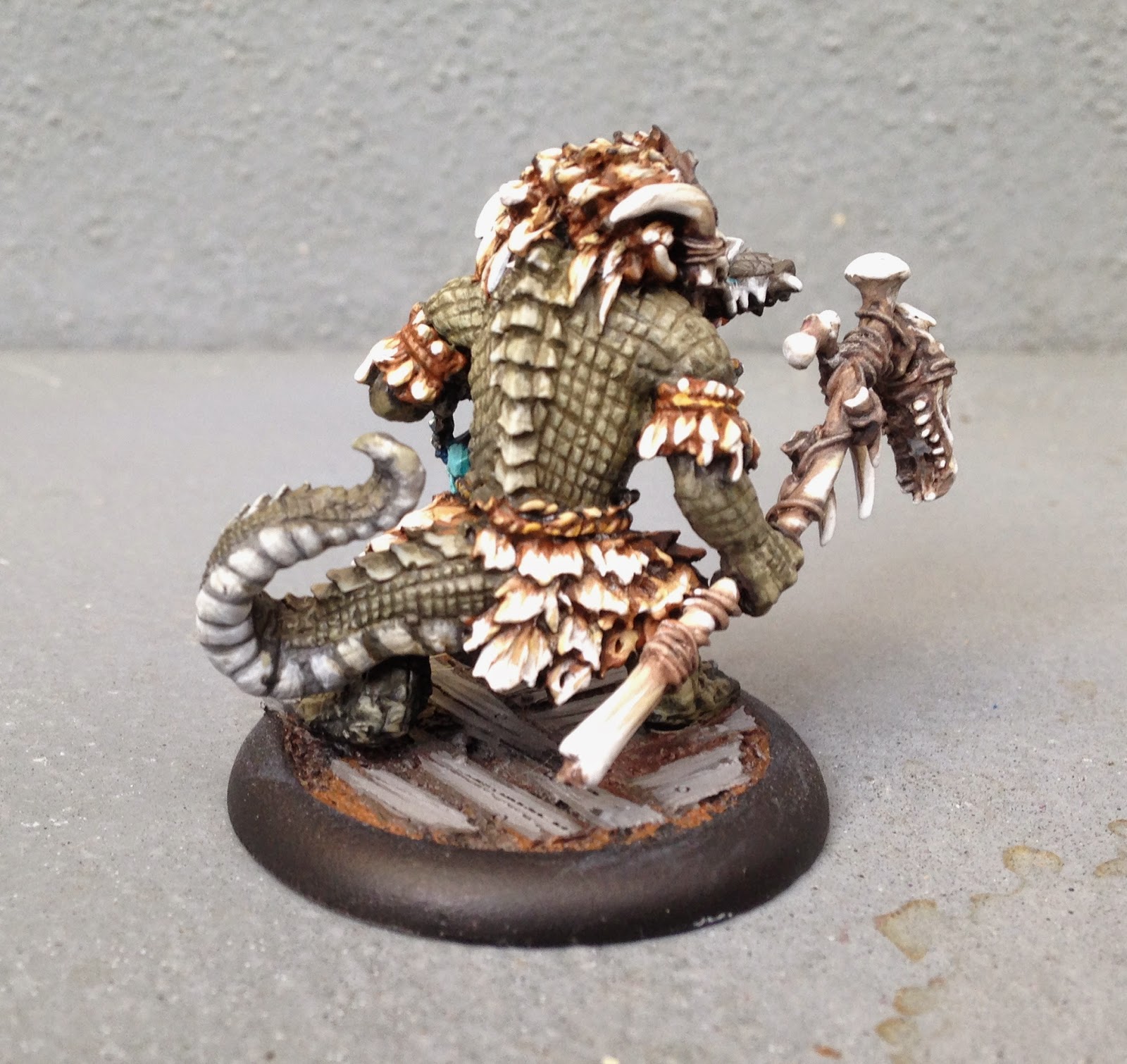 Next time, we'll have a closer look at some of the larger models in the force - the Warbeasts!